AEW Rampage: Statlander and Soho battle it out in the Owen Hart Semifinals 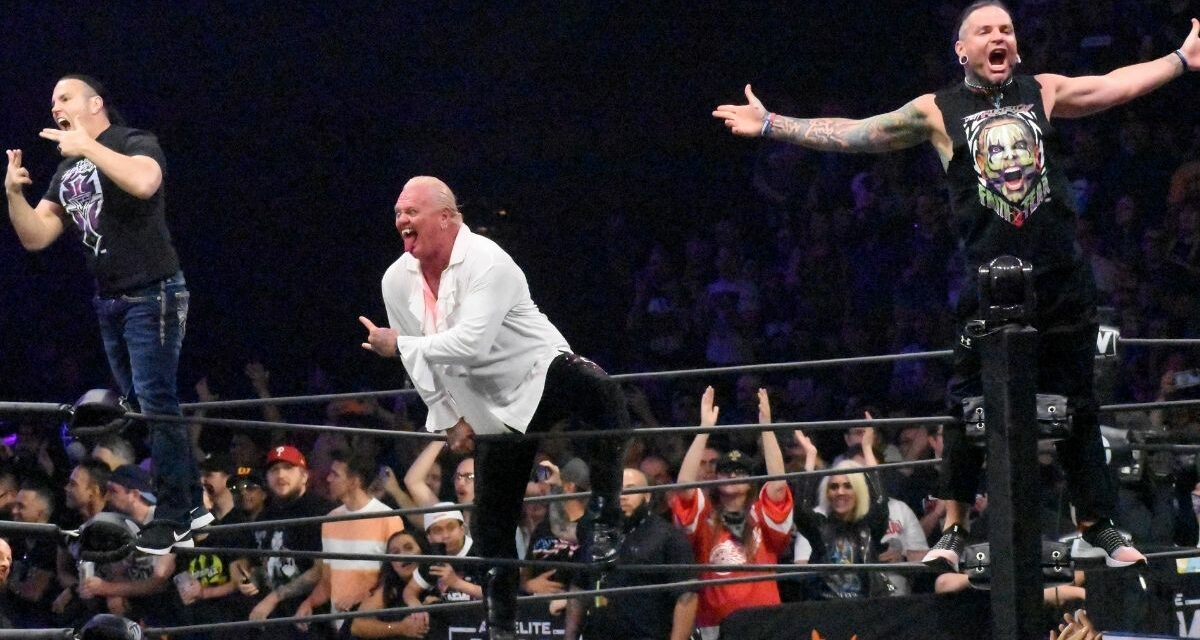 It’s Friday Night, and you know what that means?  No, not to binge the new Obi-Wan Kenobi or go into the Danger Zone, Lana!  It’s time for AEW Rampage, and it’s the final night before the Double or Nothing pay-per-view, with the final spot on the Owen Hart Woman’s Invitational up for grabs between Ruby Soho and Kris Statlander, and Scorpio Sky getting a new belt.

We’re at the Michelob Ultra Arena in downtown Las Vegas, NV.  Excalibur, Taz, and Ricky Starks have the call.  William Regal is also on commentary for the First Match of the Night, and it’s…

Fans are already hot for this match, and The American Dragon puts on a wrestling clinic, but Sydal has some moves, too, as he returns with a flying mare.  Danielson gets a Full Nelson takedown to Sydal, but he fights up to a vertical base, but gets a backbreaker by Danielson for his trouble, and then a surfboard to Sydal pulling him back by the nose, and then rains elbows to the side of his head.  Sydal fires back with a leg lariat and during Picture in Picture Danielson just breaks down Sydal, draping him on the top rope to a leaping knee to bring him back in the ring the hard way. 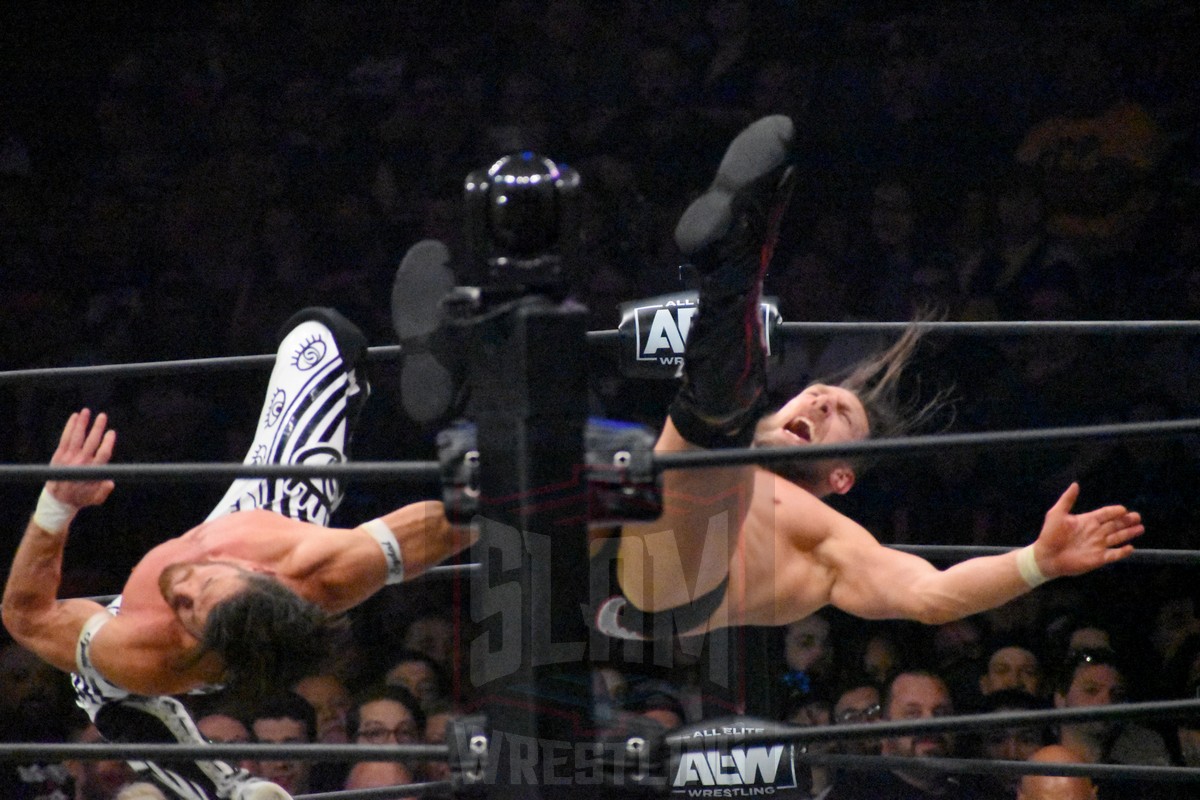 Matt Sydal vs Bryan Danielson at AEW Rampage on Friday, May 27, 2022 at Michelob Ultra Arena at the Mandalay Bay casino in Las Vegas. Photo by Ben Lypka

Sydal returns with leaping knee strikes, and goes for a leg lariat, but Danielson catches and goes for a powerbomb but Sydal reverses into a huracanrana.  He gets a nice roundhouse kick to the back of his neck and Sydal covers for a two count.  Up top, Sydal nails the Meteora, but Danielson reverses beautifully to a single leg crab, and then switches to the side with a knee to the neck and then a heel hook, but Sydal reaches the ropes to break the flurry of submission holds.  Danielson lights up with kicks to the chest, then a headbutt.  Danielson goes up top and attempts a back body drop but Sydal counters with an amazing sunset powerbomb to cover for a two count.  Danielson fires back with European uppercuts, but Sydal catches with a backslide to cover for another two count.  Danielson delivers with the psycho knee and then MMA-style elbows to the back of Sydal’s neck.  He locks in a guillotine choke variation and Regal sums it by saying of his Blackpool Combat Club stablemate, “Thank you and good night.”

Your Winner via Submission:  Bryan Danielson

There is a recap of the pairing of Hook with Danhausen, and they upcoming Buy-In Match between the newly formed HookHausen and Tony Nese and “Smart” Mark Sterling.

IT'S HAPPENING PEOPLE. HOOKhausen at #AEWDon this Sunday!!! #AEWRampage pic.twitter.com/712mr4vpU5

There’s are many mysteries in the world I don’t get, folks and the list is long like: what is our purpose in the universe, what is mankind meant to do, and why can’t I get good quality mezcal in Utah.  Actually, that last one isn’t a mystery (thank you so very little, Utah Department of Alcoholic Beverage Control!), but I will go along the ride for this one.

The Hardy music fires up and…hey wait a sec, It’s Matt and Nick Jackson looking like the brothers to the fans displeasure.  They obviously went back in time to raid there ring gear, and speaking of time travelling, Gangrel comes out with the golden chalice of red stuff to spit out, and let’s join for the next match.

The Young Bucks vs. Taylor Rust and Jon Cruz

Yeah, as entertaining as this is, it’s a squash match so enjoy the Venison Butternut Squash stew recipe.

The end has the “Not Hardys” give a Superkick Party to the jobbers, and then they do the Hardy finishers; Matt nais the Twist of Fate, and Nick delivers with an impressive Swanton Bomb for the win.

Your Winner via Pinfall:  The Young Bucks

After the match, Matt and Nick and Brandon Culter along with Gangrel start to celebrate, except the Vampire Warrior gets jumped by the Bucks.  They threaten a BTE Trigger, but the real Hardy’s show up for their former Mentor/Sire/Vampire Lord (I dunno, it was the 90’s and fang bangers were a thing, kids.  Ask your parents).  Cutler jumps in to give the Bucks time to get away, and Gangrel and The Hardys show how it’s done.  Gangrel gets the Impaler DDT, and Matt and Jeff deliver the Twist of Fate/Swanton Bomb to send a message back for their upcoming Double or Nothing match.

Darby Allin cuts a promo, challenging Kyle O’Reilly for taking out Sting.  He tells the Undisputed Elite member to face him, or he’s coming after Cole in the Owen Hart Tournament Final or anyone in the Elite group.  We’ll see what happens later in the show.

Dante Martin vs. “Platinum” Max Caster (with the Gunn Club)

This is a rematch from their AEW DARK ELEVATION match, and…yeah.  Most entertaining was when Castor turns to “The Ass Boys”, and The Gunn brothers are screaming “Los Angeles”, before Anothony Bowens gets on the mic and calls out the Las Vegas fans from his wheelchair, and then says to Billy Gunn, “Scissor me, Daddy!”

(Author’s Note:  As I often mention to friends and family alike, there are things that defy explanation when I write about professional wrestling.  This is one of those things.) 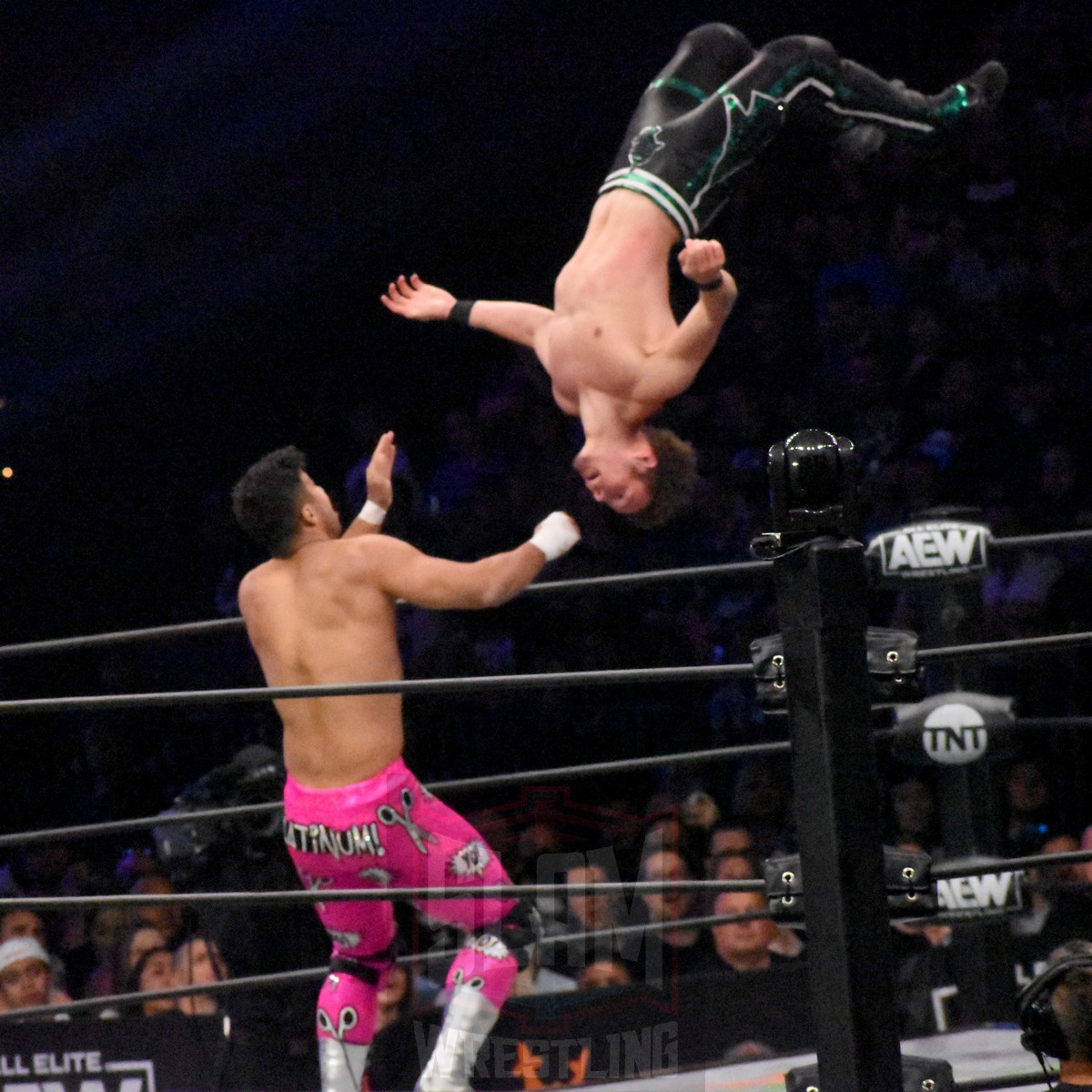 Dante Martin in the air against Max Caster at AEW Rampage on Friday, May 27, 2022 at Michelob Ultra Arena at the Mandalay Bay casino in Las Vegas. Photo by Ben Lypka

Martín goes right at Caster and the Gunn Club with a springboard crossbody, but “Daddy” Gunn grabs the upstart Top Flight member and slams his back to the ring apron.  Referee Aubrey Edwards ejects The Gunn Club despite their protestations.  While Caster is mostly in the driver’s seat during the match, he cannot put away Martin. He manages get Caster with the Nose Dive for the pin and the win

Your Winner via Pinfall:  Dante Martin

Samoa Joe and Adam Cole offer thoughts on the Owen Hart Invitational Tournament Final at Double or Nothing, and only one of these men is coming out the winner in this cool video package.

Men of the Year are in the ring (again), and Dan Lambert and Ethan unveil the new TNT belt that Sammy Guevara and company destroyed last week.  As Page unveils, it’s just the old TNT belt design but in Los Angeles Laker colors.  As Sky proudly displays the belt, up on the All Elite Tron is Guevara, Tay Conti, and Frankie Kazarian.  They are at Americas Top Team facility, and they eye the trophy cases full of title belts.  Guevara smashes the trophy case, and they proceed to take some of the belts, saying to Lambert and company they’ll bring it to them at the PPV once they face them in trios action.  After they go off the Tron, Sky agrees to the match with him, Page, and Paige Van Zant.  But he adds the stipulation that when their team wins, Sky says they cannot challenge for the TNT belt again. 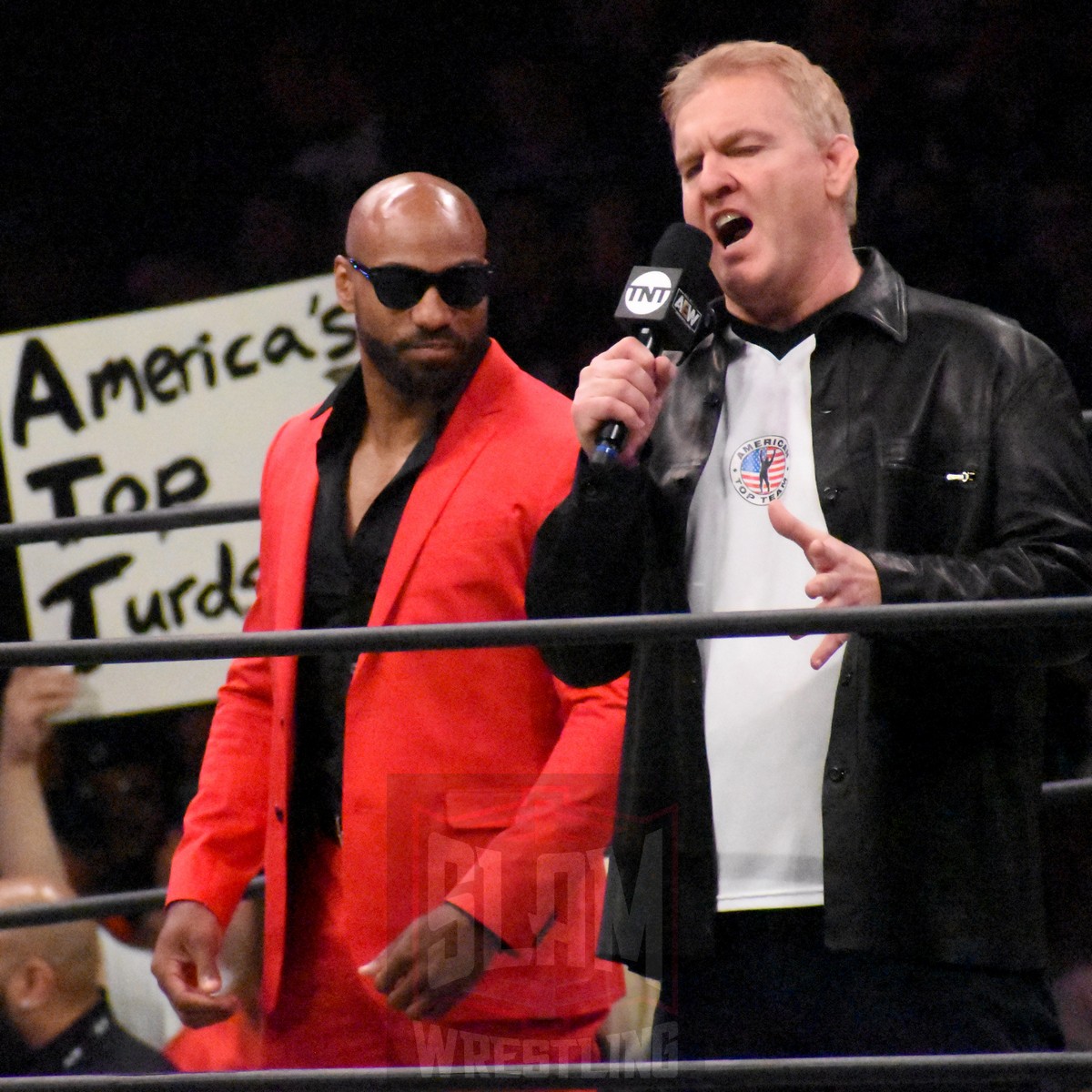 Scorpio Sky and Dan Lambert at AEW Rampage on Friday, May 27, 2022 at Michelob Ultra Arena at the Mandalay Bay casino in Las Vegas. Photo by Ben Lypka

The stakes are raised, and just in time for Double or Nothing.

Mark Henry is backstage with Ruby Soho and Kris Statlander.  Soho says she lost her confidence a bit, but then being part of tournament means proving something to herself.  For Statlander, she remarks she’s been here since day one but has no titles to show for it, a bad knee, and she was a backup for Shida for her “injury” in the tournament.  She needs this more and will go through anyone, foe or friend, to get it.

It's time for the main event and we're gonna get one hell of a good one 🔥 #AEWRampage pic.twitter.com/ujcinbYO6m

Oh, there’s a countdown to Double Or Nothing, but we’ll have your predications later in the week.  Oh, and Allin will face O’Reilly trhat night.  For now, let’s go to the…

Statlander is just laser-focused and ready to prove herself in this match, with the winner facing Dr. Britt Baker, D.M.D.  The bell rings and Statlander is all business, but Soho is able to counter her offense.  The fans are giving dueling chants of “Ru-bee So-ho/Stat-lan-der!”  Statlander has the power, but Soho is tenacious.  Statlander gets a short-arm clothesline to Soho, and she is in control during Picture in Picture, as she hoists Soho up with a delayed vertical suplex that lasts thirty seconds (I know because one of the commercials lasted that long before she dropped Soho back down on the mat).  She picks up Soho, but counters to a crossbody for a two count.  Both women give dueling headbutts and then a springboard guillotine, but Statlander is able to counter.  Statlander picks up Soho in a fireman’s carry and climbs to the top rope.  Soho reverses to an avalanche huracanrana but Statlander hangs on and slams hard with a powerbomb to cover for a close two count. 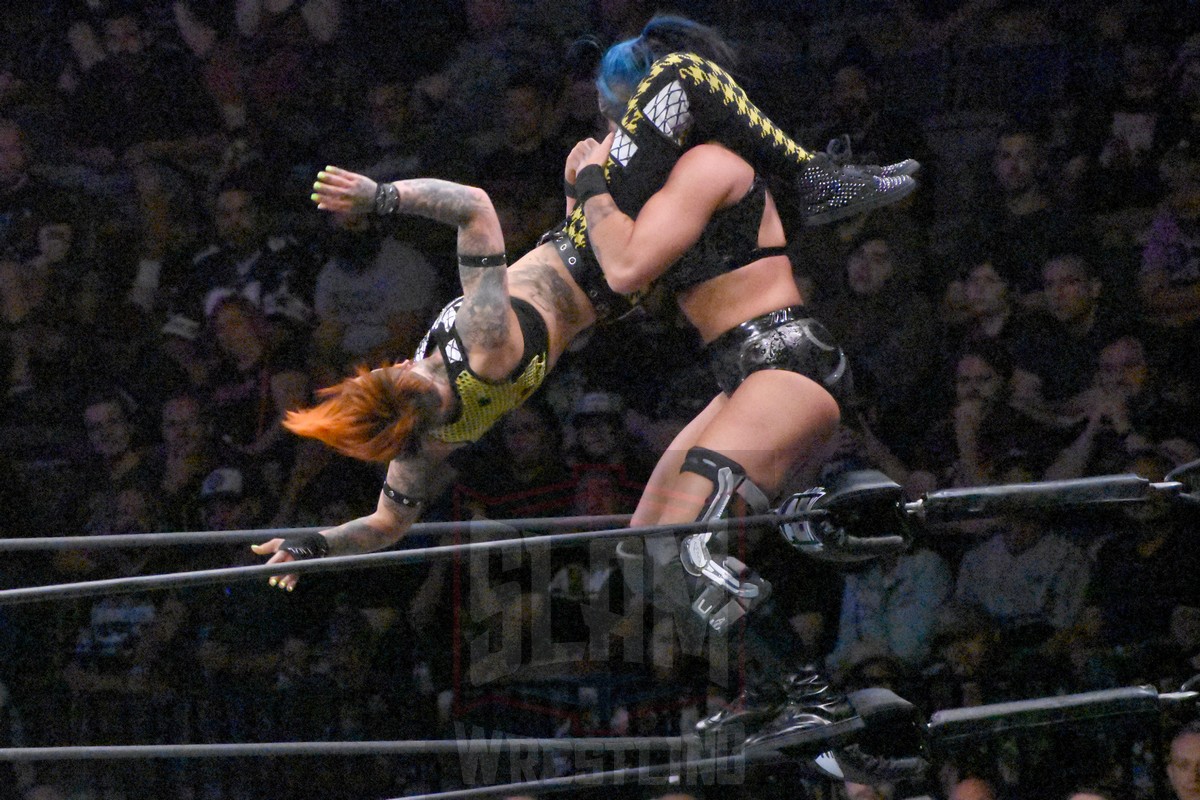 Ruby Soho vs. Kris Stadlander at AEW Rampage on Friday, May 27, 2022 at Michelob Ultra Arena at the Mandalay Bay casino in Las Vegas. Photo by Ben Lypka

Statlander sends Soho to the corner and charges at her.  Soho evades and she injures her bad shoulder.  Statlander tries to pick up Soho for the one-armed Gorilla press, but her shoulder is now acting up and she drops her.  Soho hits the No Future, but Statlander falls out of the ring to the floor.  Soho goes after her and gets a huracanrana to the floor, and then sends her back in the ring, where she follows up with a slam to her bad shoulder, aggravating the injury, and then transitioning to a double wrist Kimura lock.  She has it cinched in tight, but Statlander manages to reach the bottom ropes to break the hold.  Statlander sends Soho to the corner, and she tries to jump over her, but Statlander catches.  Soho is on her shoulders, and she attempts a reverse ‘rana but Statlander is too strong as she pulls her back up and slams her head on the top turnbuckle. Statlander follows with an impressive Chaos Theory, and then nails a variation of the fisherman’s buster.  Statlander covers for the one, two…Oh, so close.  Statlander is in disbelief and hits with a short clothesline and tries a submission hold.  Soho kicks out and then rolls up Statlander to a crucifix pin for the one, two, and three.

Your Winner and Advancing in the Owen Hart Women’s Invitational:  Ruby Soho

As Tony Schiavone goes to interview Soho, Dr. Britt Baker makes her presence known.  Soho grabs the mic from Schiavone and says she is tired of hearing her talk.  Amidst boos, she promises at Double or Nothing she will beat her in the tournament, and she is cashing in that receipt, as the show goes to black.

Rampage fans were pulling for Statlander, not Soho

This was a great main event, and even though Soho advanced, Statlander is making a case to be back in the women’s title hunt again.  That’s where the extra .5 star goes towards, and it is well deserved.  The rest of the card was solid, and I am still baffled by the pairing of The Acclaimed and The Gunn Club, but I’ll go along with it for now.

Until then, see you at Double or Nothing!