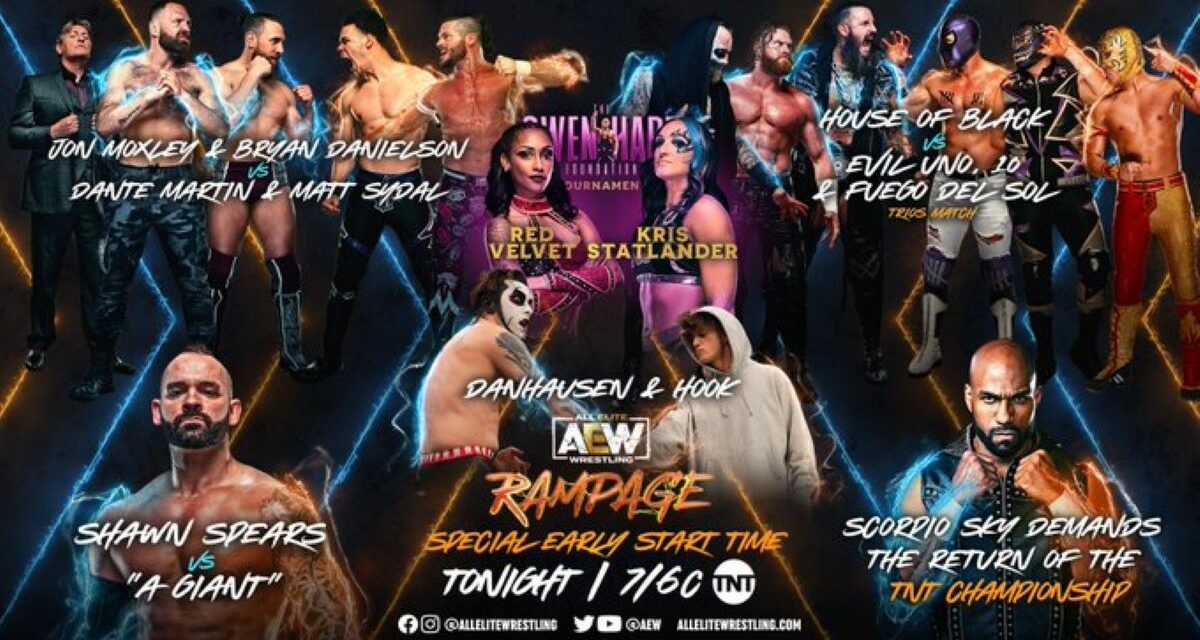 It’s Friday night, and you know what that means?  No, Not to take a leave of absence, nor to cease and desist accusations.  It’s time for AEW Rampage, and Dante Martin and Matt Sydal are wading into the deep end of the pool in tag action.  Specifically, the Blackpool Combat Club.

We’ll get into all the actions at the Ferrita Center in Houston, TX.  Excalibur, Taz, and “The Wizard” Chris Jericho have the call, and time to get to the First Match of the night and it’s… 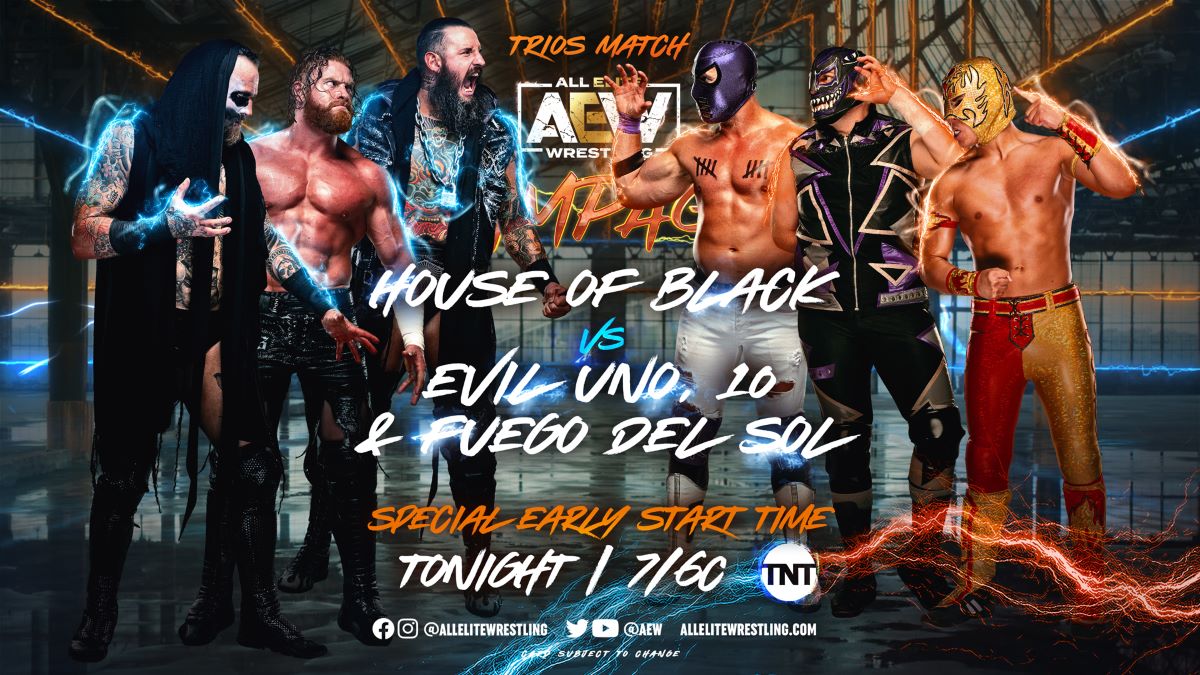 Remember when The Dark Order was the faction of darkness and mystique?  Pepperidge Farm remembers, too.  I like the Dark Order back in the beginning, but it seems since the loss of Brodie Lee, they have been treading water as a stable. Sure, their helping “Hangman” Adam Page is nice, but does that feel like progress?  It’s a legit question I want to answer one day because something is needed to shake up the Dark Order because as of right now, it’s not a group I want to join.  There are others I would join first before The Dark Order, and that includes joining the GOP or the Church of Jesus Christ of Latter-Day Saints (you know…the Mormons).

So why am I going on a longwinded screed about the Dark Order?  If you thought I’m hip-deep into the Mezcal well…you’re partially right.  The match overall has The House of Black breaking The Dark Order in half, and Brody finishes off Evil Uno with a Gonzo Bomb

Your Winners via Pinfall:  The House of Black

Now, that is a stable to be reckoned with.  But before the House can gloat, Death Triangle comes out at the top of the ramp.  Penta starts to unveil something with the Double of Nothing Pay-per-view logo, and it’s revealed to be a tombstone made for The House of Black. Cero Miedo, indeed.

Lexi Nair is backstage with The Gunn Club and Max Caster. Anthony Bowens got hurt on AEW DARK Elevation, and they wish him a get well soon.  As the younger Gunn members and Caster ask “Papa” Billy what they’ll do, the elder Gunn says that will give a big scissors party upon his return.

Yeah, it sounds even weirder and creepier as I typed it up.

Tony Schiavone with FTR about the ROH Tag team titles, and they offer Roppongi Vice a shot at the belts. Dax Harwood states that if this gets them closer to a chance to challenge for the IWGP Tag belt, they’ll be happy to lock up because FTR will give them a fight. Top Guys, out! 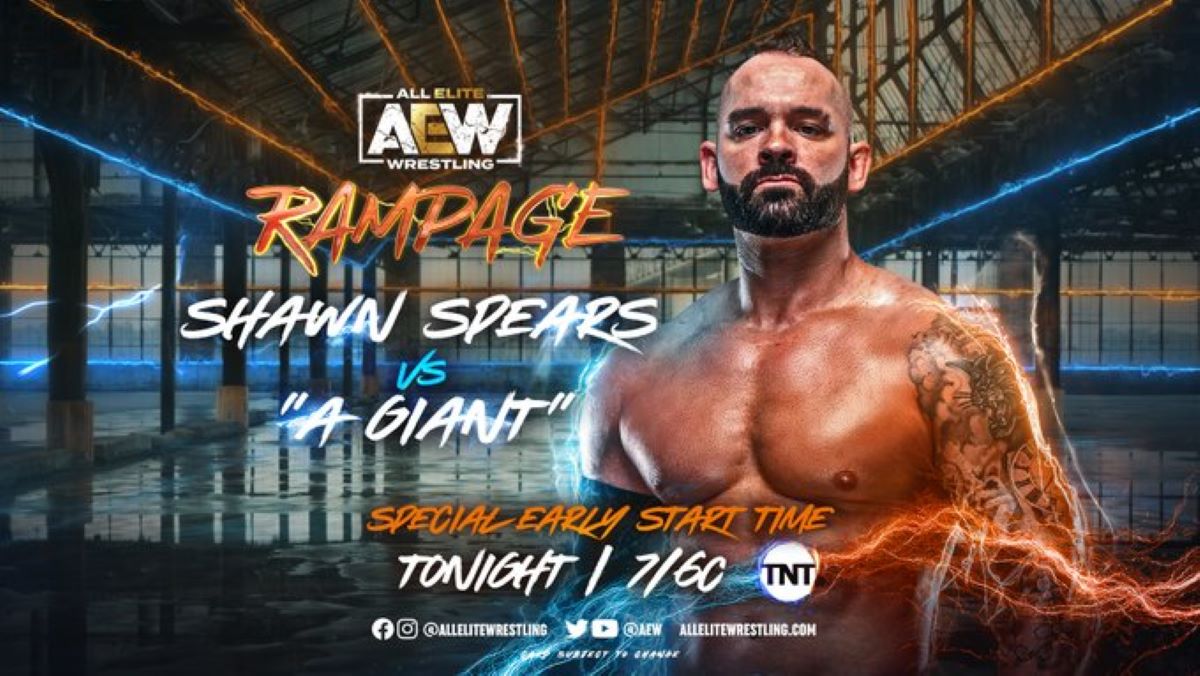 Jericho remarks at the “big sweater” the former Killian Dain is wearing, whilst I marvel at the bald head.  As this is another stop on Spear’s “giant killer” schtick, allow me to do a High Spot Haiku™.

The Chairman is around, but a

Your Winner via Pinfall:  Shawn Spears

Afterward, Spears promises when he gets in the steel cage with Wardlow at Double or Nothing, it will be the end of another giant.  Tough talk, but the run of giants Spears has put away suggests he can back up the talk.  That, and the fact that MJF is the special guest referee doesn’t hurt.

The Undisputed Elite talk backstage, as Adam Cole and Kyle O’Reilly promise to have a good match at the Owen Hart Invitational tournament (and I’m wondering what will be new this time between the former Future Shock teammates).  The Young Bucks state they got time for the Hardys, and they give them a fight. Got it? Now turn off the camera, Brandon, you idiot!

And now for something fun to advance things along, here’s the… 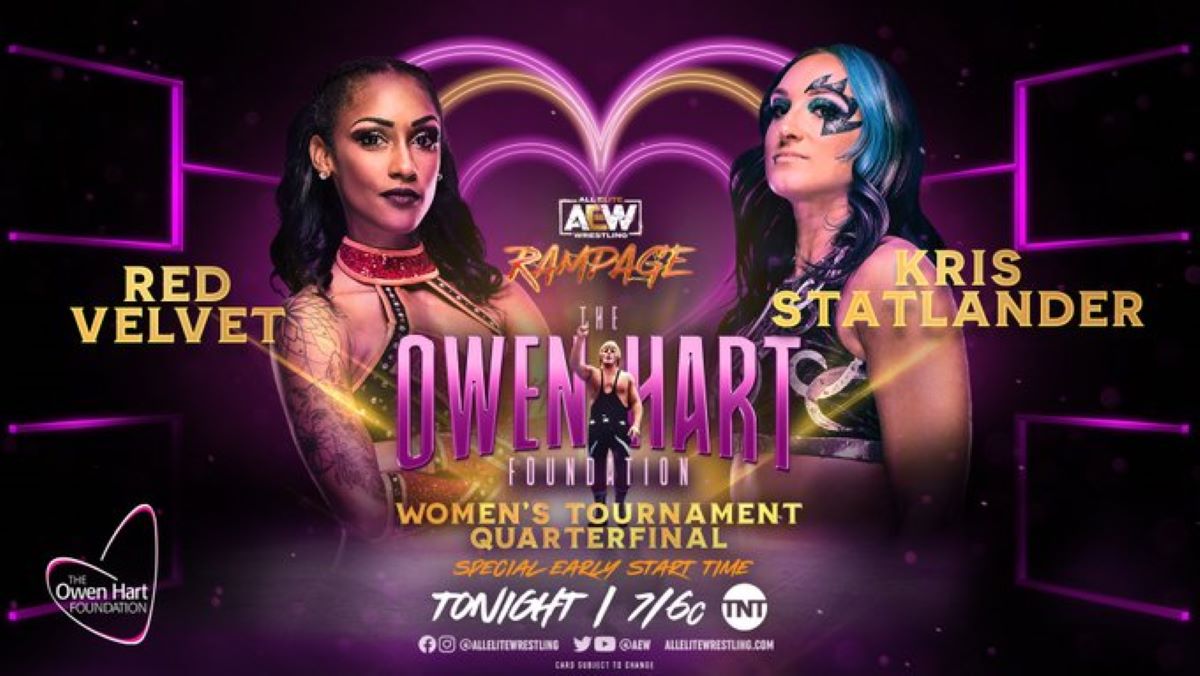 Ruby Soho joins commentary to scout her next opponent in the tournament bracket.  Statlander takes control of Velvet, and she gets an impressive one-armed gorilla press to a slam on her former tag partner.  She sends Velvet to the outside, and Statlander goes for a baseball slide.  Velvet traps her in the ring apron and she clubs away in front of the Baddie Section.  During Picture in Picture, Velvet works away at the braced leg of the Galaxy’s Greatest Alien.  She uses her long legs to choke Statlander and keeps her grounded.  Velvet gets Statlander’s braced leg on bottom ropes until…

Ads (Author’s Angry Rant:  You degenerate swine!  What rotten Full Sail Flunkout decided *that* was the time to cut away.  Also, and I will keep this up until Tony Khan has no choice to answer when I ask:  What in the blue hell is the point of Picture in Picture if you end up going to a gods damned commercial?!)

Back to the match, and Statlander is on offense (with no recap of what happened for her to escape Velvet’s attacks.  UGH!) with a running knee to the corner, and a deadlift German suplex.  She gets her up to a vertical suplex, But Velvet gets a knee and a chop block to Statlander.  Velvet lands the Final Slice but she kicks out at two.  Velvet ramps up with a front face slam, and still gets another two count to her dismay.   Statlander attempts the Big Bang finisher, but Velvet rolls up, but a Statlander reverses it to a rollup into a pin for the win.

After the match, the Baddies swarm ring and put the boots to Statlander.  Soho comes out for the assist, but the numbers game catches up. It’s looking bad for the Galaxy’s Greatest Alien until…well, hello!  Anna Jay runs out, grabs Sterling’s crutch and she start swinging to clear the ring of all the Baddies.

Tony Nese and Mark Sterling, along with HookHausen, are in a training montage for their Buy-In match for Double or Nothing, and it’s…well, it’s no Rocky montage, that’s for certain.

Men of the Year are in the ring.  Sky is especially pissed off at Guevara and Conti made off with the TNT belt last week and he wants it back.  Cue the Spanish God on the Jumbo EliteTron™, as he wants a match.  Not surprisingly, Sky refuses, so Guevara does the mature thing and destroys the belt with a sledgehammer.  He tells Sky there’s one other person that wants to add to the destruction, and Frankie Kazarian comes in the picture in full Reservoir Dogs regalia (thanks for the image, Jericho.)  He promises what’s happening to the title belt is a precursor to what he’ll do once he gets his hands on the Men of the Year.

Geez!  What in the name of Mr. Blonde does Kazarian have in mind?

Tony Schiavone is backstage with Dr. Britt Baker, D.M.D. and Toni Storm. Baker asks if she can handle it in the Owen Hart Tournament when she faces her in the ring.  Storm counters by asking if she can handle the match without her group. She continues by advising like she did with Jamie Hayer, she promises to rearrange her teeth, and then she’ll be her D.M.D.  Baker walks off in a huff because Storm did her catchphrase better than she could…at least, that’s what I’m telling myself.

Mark Henry now has the Blackpool Combat Club and Dante Martin/Matt Sydal for their final words. Henry asks what Martin hopes to get out of the match, and the Top Flight kid wants a win to show he can hang with the best.  Sydal says he wants to bring the “Peace, Love, and Pro wrestling.”  Before I can ask what kinda hippie talk is that Danielson responds he wants Peace and Pro Wrestling…but he wants violence and pain in the mix.  Moxley goes off on a rambling tangent, but the gist is that after tonight, Martin and Sydal will abandon all hope.

Before we get there, Excalibur runs down all the matches coming up for Double or Nothing.  They get word the Schiavone is backstage with Jade Cargill.  The TBS champ dismisses Schiavone, and she lays out a challenge to Anna Jay for the TBS belt at Double or Nothing.  Hmm, that would be cool to see.  But even cooler is the Main Event that has… 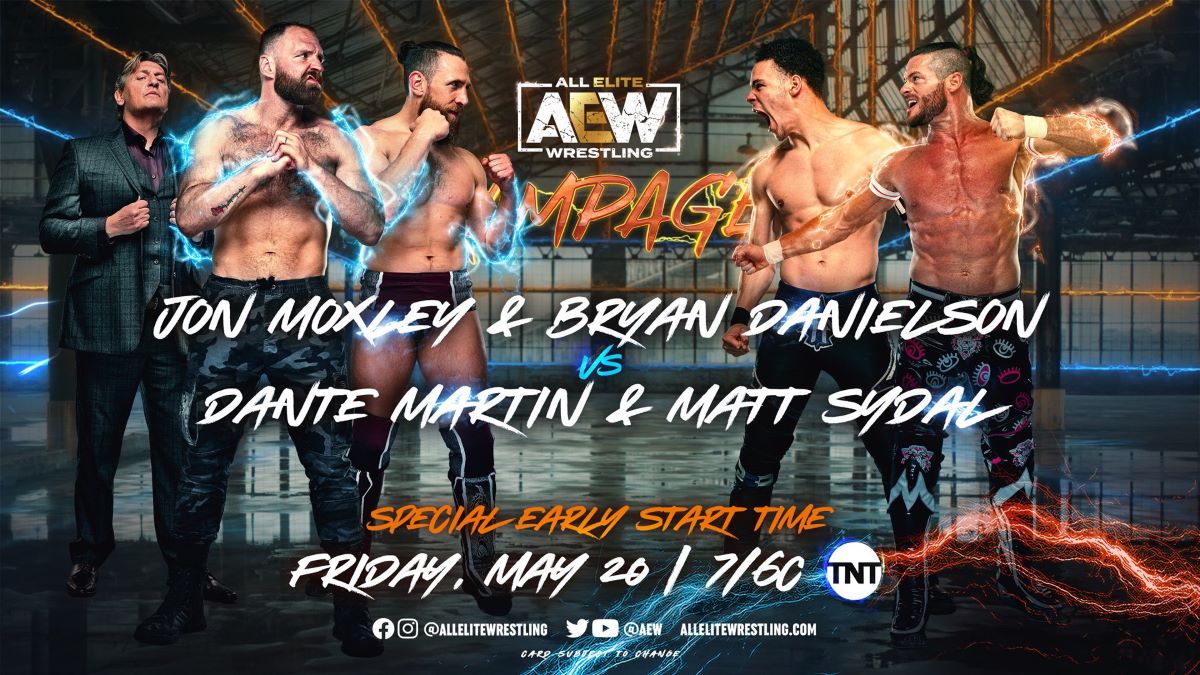 William Regal is at commentary alongside Jake Hagar, who’s right behind Jericho.  Methinks something might go down later in the show.

As the bell rings, The Blackpool jump Martin and Sydal and its sink or swim.  Danielson and Moxley take turns sending Martin to school, and The American Dragon gets the Top Flight tag specialist in a surfboard before going to a modified Dragon Sleeper to raining elbows alongside his ear.  A tag to Sydal and he keeps pressure on Danielson and then Moxley with a slice kick to cover for a two count.  Moxley stuns him on the top rope.  He sends Sydal to the outside, and a tag to Danielson and he gets him with a flying knee on the outside of the ring.

Inside the ring during Picture in Picture, Sydal is Reborn in Peril.  It looks bleak but then Sydal gets a hot tag to Martin, and he takes full flight to The Blackpool Combat Club, with a dives from the ring to the floor with some hang time.  Back in the ring, Martin gets a crossbody to Danielson to cover, and Moxley breaks the pin count.  Martin attempts the Nose Dive finisher, but Danielson kicks his feet out from under him.  He climbs up top, and he and Martin come crashing down in an avalanche double undertook suplex to a LaBelle Lock, and Martin claws away to escape the signature submission hold.  Martin reaches the bottom ropes, and Danielson modifies to rap his outstretched arm.  Martin changes up and gets a toe on the ropes to break the submission hold.  Danielson lights up with “Yes” kick to his chest.  Sydal gets back in the ring, sends Danielson out, and he and Martin nail stereo roundhouse kicks to Moxley.  There’s a Meteora to Danielson by Sydal on the ring apron, and Martin delivers the Nose Dive to Moxley.  He covers for one, two, and Danielson breaks up the pin again.  As he and Sydal continue to brawl, Moxley gets Martin in a Piledriver to cover but he kicks out. Now Mox and Danielson both hammer Martin and Sydal with MMA elbows.  As Mox has the legal man in Martin, one Paradigm Shift plants young Martin hard to the center of the mat, as Moxley covers for the one, two, and three.

Your Winners via Pinfall:  The Blackpool Combat Club

As Moxley and Danielson celebrate heading up the ramp to meet Regal, the Jericho Appreciation Society jump the Blackpool Combat Club and work them over until the show fades to black.

A good solid show.  The first half didn’t blow me away, but the latter half with Statlander/Velvet and then the Main Event with the Blackpool Combat Club taking it to Martin and Sydal made it better.

And seriously, can any of the Monkeys on the Truck utilize the Picture in Picture by staying with the picture?!