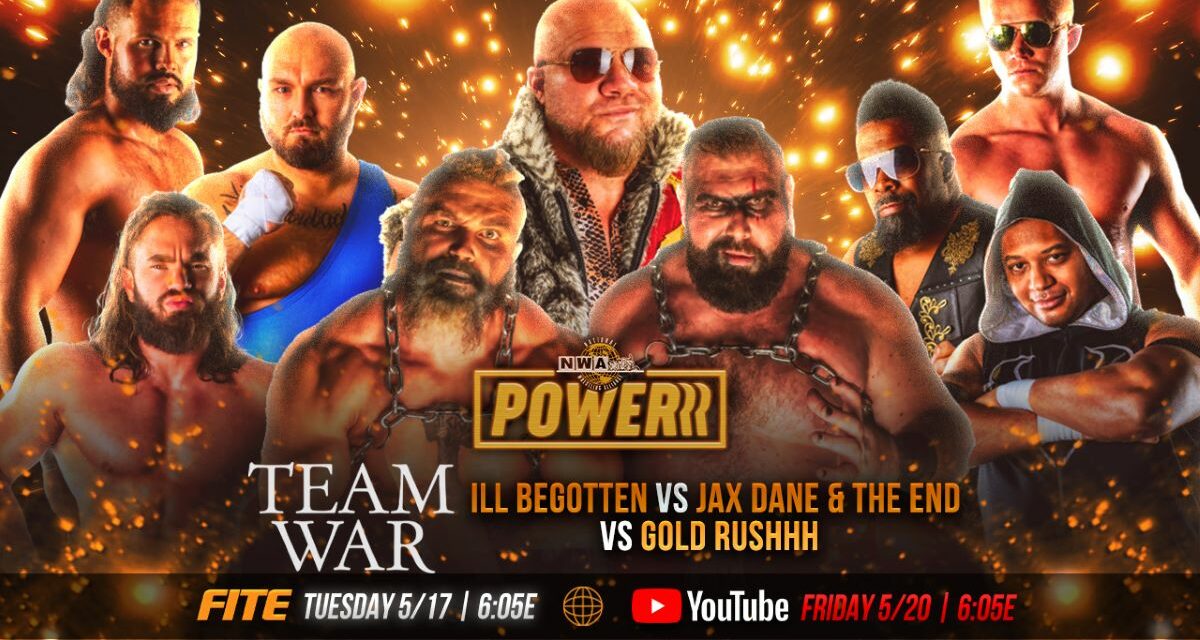 As the National Wrestling Alliance set up their big finale before going on a PowerrrTrip to Oak Grove, tonight’s two stand-out matches will be the signature Team War, and the main event will have Mickie James looking to go Hardcore Country against Natalya Markova.  With so little action and so much time (Strike that!  Reverse it.), time to head into the show and step Into The Fire.

The show opens with a video montage of the six-man tag, and the feud that is boiling between the NWA Heavyweight Champion Matt Cardona and Nick Aldis.  After last week’s match, there was an interview segment that Joe Galli conducted and Cardona doesn’t think he deserved a match, but Aldis wants the Ten Pounds of Gold more than beating him to a pulp.  The Dealer demands Cardona steps in the squared circle but with the stipulation that there is no outside interference.  Galli recapped that Cardona countered with an offer to put up the belt in a deathmatch, as he is the “Deathmatch King.”  As in life, so in wrestling; you buy the bit, you buy the premise.  Expect more as we round the corner for the Alwayz Ready PPV.

We’re at the Skyway Studios in Nashville, TN.  Galli has the call, alongside Austin Idol and Tyrus.  We already know that Idol is audible for the show, but Tyrus is understated in commentary and is a nice contrast to Idol’s bombastic comments.

We go to the Podium with Kyle Davis, and he has Da Pope.  He wants to talk brother to brother with Trevor Murdoch.  The former champ comes out, and Pope wants Murdoch to listen.  He’s concerned that the former champion is losing his focus after losing the title, and Pope asks not to forget what they stand for.  Murdoch is unresponsive to Pope’s calls to stand up for the Funks and the Dustys of yesteryear.  But it’s when he invokes his former mentor, the late great Harley Race, and says he’d slap some sense into him, and Murdoch now perks up.  He stares at Pope and then walks away.  Could it be Pope’s words finally shook some sense in him?

That is a question for another day (or worse, a sub-Reddit), but let’s go to your First Match of the night, and it’s for… 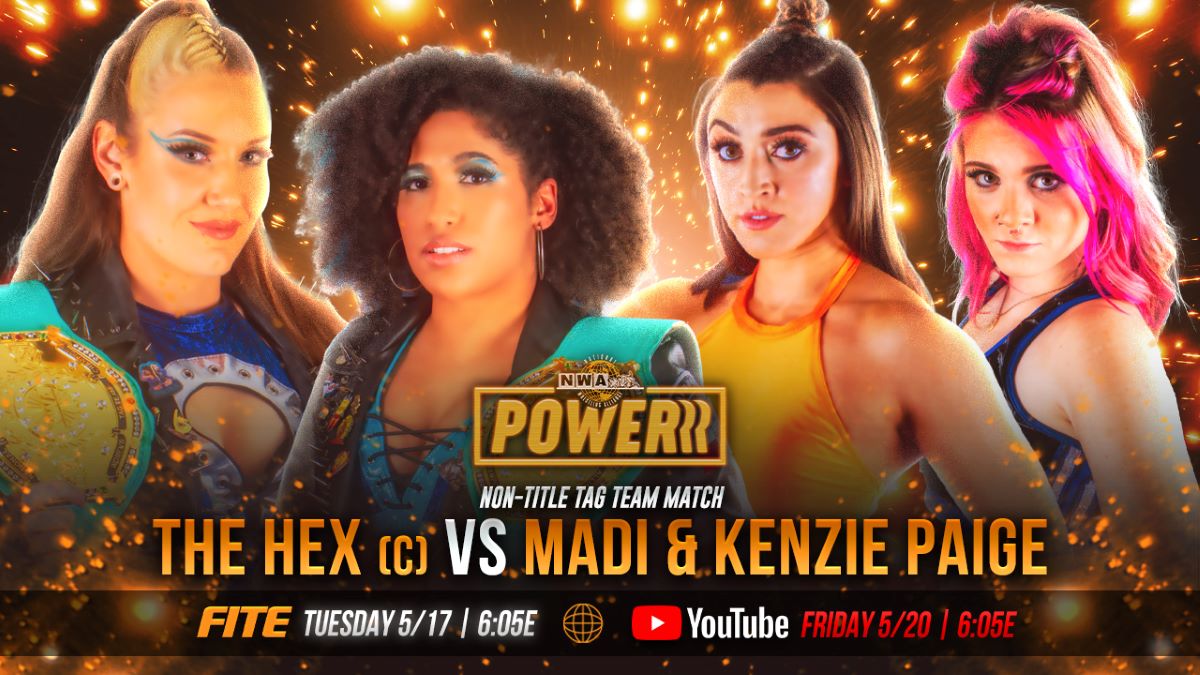 At first, Galli stated it was a non-title matchup, but word from the back was NWA Owner Billy Corgan changed it to a title match at the last minute.

Kay and Paige start, and it goes back and forth between the women.  As Paige backs up to her corner, Madi tags herself in to show Paige how it’s done.  Only, she gets more than she bargained for as it becomes a Hex double team fun at Madi’s expense.  At one point, Madi isolates Belle and blinds her with Hairspray (and somewhere, Rick Martel is shaking his head at this Arrogance).  Madi covers Belle but gets a two count.  As Madi has no problems trying to cheat to win, Paige is a bit trepidatious, and the story of this match is neither Madi nor Paige is on the same wavelength.  In any case, Belle gets to her corner to get the hot tag to Kay, and she is an AK firing away.  Madi gets a chair outside the ring and tells Paige to use it.  Again, Paige says no, and Belle brawls with Madi on the outside.  Kay comes from behind Paige and rolls up with a bridge to get the pin.

Not a bad match, but still wasn’t anything in the way of competition.  Speaking of which, wonder what Sasha Banks and Naomi are doing?

Velvet Sky is backstage with Taryn Terrell, and she has a surprise?  Sky asks what the surprise is, but Terrell won’t spoil it. Besides, she regards Sky doing interviews backstage as a step down from commentary.  Sky tries to keep her composure, and Terrell promises it’s a surprise.

All things being equal, this has to be better than Velvet Sky listening to Idol prattle on.

And now for something generational, here’s… 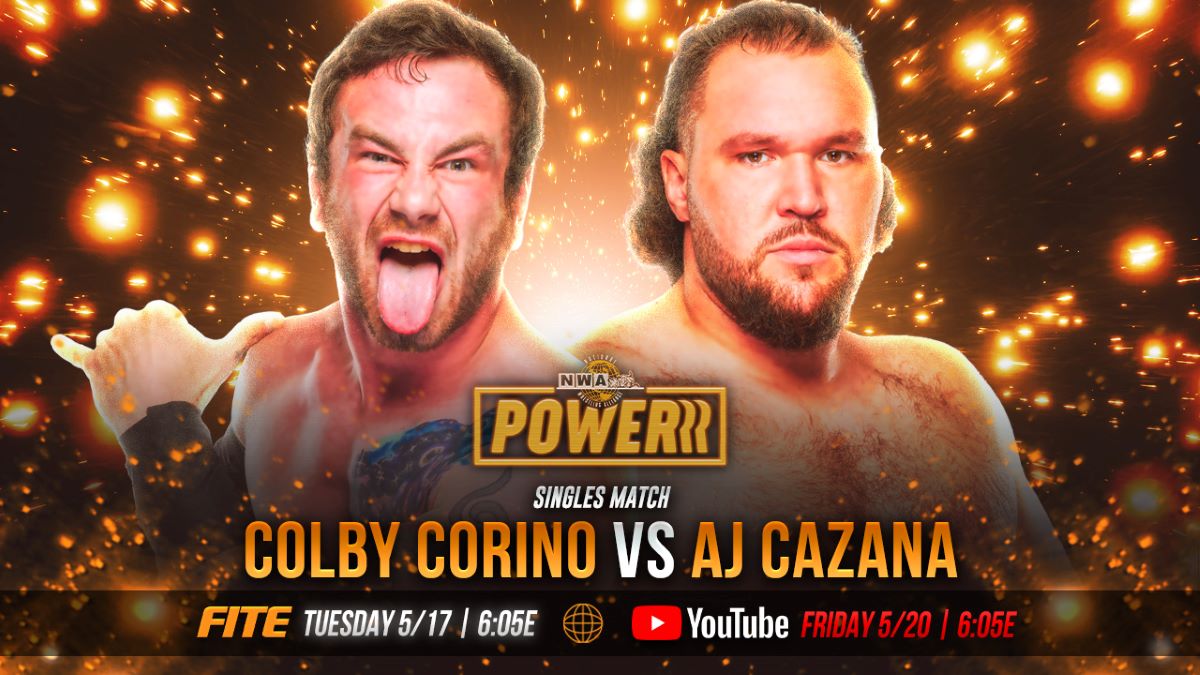 “The Last Bastion of Professional Wrestling” Colby Corino vs. “The Legacy” AJ Cazana

Between Corino being a second-generation wrestler, and Cazana a third-generation grappler, Idol quips that there’s a lot of DNA in the ring.  That prompts Tyrus to ask, “Do we need to talk DNA, boss?”  Whatever your thoughts are on the man as a person, those understated comments make me believe Tyrus is a natural at commentary.

Corino is firmly in the driver’s seat taking the fight to Cazana.  He goes for the Colby Crush, but Cazana moves away and Corino injures his tailbone hard on the mat.  He gets a front suplex on Corino to cover for only a one count.  Cazana tries to grab him, but Corino hangs on to the ring ropes.  Cazana breaks him free, but Corino rolls through what looks like a sunset flip and then goes to a double stomp.  He then works over Cazana’s back, but he picks up the Last Bastion to a spinebuster to cover for a two count.  Then Corino goes up the top turnbuckle for a double foot stomp and gets the pin and the win

We get a recap of the action from last Saturday’s NWA USA, but folks…do I need to tell you to check it out here?

At the Podium with Kyle Davis is The Briscoe Brothers, and he asks Dem Boys where they go from here.  Mark sends a message to MechaWolf and Bestia 666, their “amigos” or “cabrones” if you will, that they’ll be coming for the titles.  Jay backs up his brother and says the titles aren’t safe.  It ain’t gonna be long before Dem Boys are holding the gold.  I say I want this sooner than later.

Galli announces they’ll be going on another PowerrrTrip next week to Oak Grove, KY.  But now it’s time for a…

The best chant of the night has the fans refer to Dane’s fur vest couture as “Furry Turd.”  Ha!  The second-best line of the night has Tyrus upset he didn’t get the NWA blue blazer coat.  I share his pain.

In any case, if you forgot how the match works, this is an elimination match.  Pinfalls, submissions, or being sent over the top rope are needed until all combatants are gone and the remaining wrestler(s) remain from that team.  That said, Plunkett, Dane, and Jeez start the match, and Jeez gets the early advantage.  But The Dane Event is too much for both men, as he stacks up Jeez and Plunkett for a double Samoan drop, and a Dane Event eliminates Jeez.  Now Rockett is in, and he has unfinished business with Dane.  He and Plunkett team up on The Dane Event that sends him out of the ring under the ropes. Rockett and Plunkett then face each other before Plunkett rakes his eyes.  Dane climbs back up and touches the top rope, and Rockett nails him with a dropkick, and Dane is eliminated because he is sent over the top rope (again; buy the bit, buy the premise).

Now OdinSon comes in and gets a European uppercut to Rockett and Plunkett.  He then gets Plunkett in a torture rack and the Tater Peeler taps out.  Rockett that opportunity to knock OdinSon over the top rope to eliminate him.  Taylor and Parrow come in for their respective teams, and Parrow just destroys Rockett with a superplex.  Taylor follows with a frog splash to a pin to eliminate Rockett.  At that point, Parrow picks up Taylor and tosses him over the top rope.  That brings in Freeman and Clearwater, and the Golden Boy gets a stunner on Parrow to cover for a two count.  Clearwater gets the Midas Touch to Freeman, but Parrow delivers a chokeslam that eliminates all of Gold Rushhh, much to Idol and Tyrus’ dismay.  Freeman rakes the eyes of Parrow, and he covers for a two count.  Parrow ends it with a sit-out Michinoku Driver and puts away the last of the Ill-Begotten.

Your Winners:  Jax Dane and The End

Velvet Sky is backstage again.  Angelina Love comes out as she attempts to interview The Sinister Minister himself, Father James Mitchell, and Gaagz the Gymp.  Mitchell talks about classic literature like Dracula and Frankenstein.  As Dracula had Renfield, and Dr. Frankenstein has his monster, Mitchell notes that he had an assistant in Igor.  He goes on to explain that Gaagz is his Igor, and from there between Love interrupting and Mitchell and Love talking down to the Gymp, it just goes off the rails.

I can’t help but wonder if maybe May Valentine would have added some more gravitas to this.  Don’t get me wrong, Velvet Sky is fine with some Dirty Sexy Boys, but this was outside her wheelhouse.

But let’s get to the Main Event, and it’s… 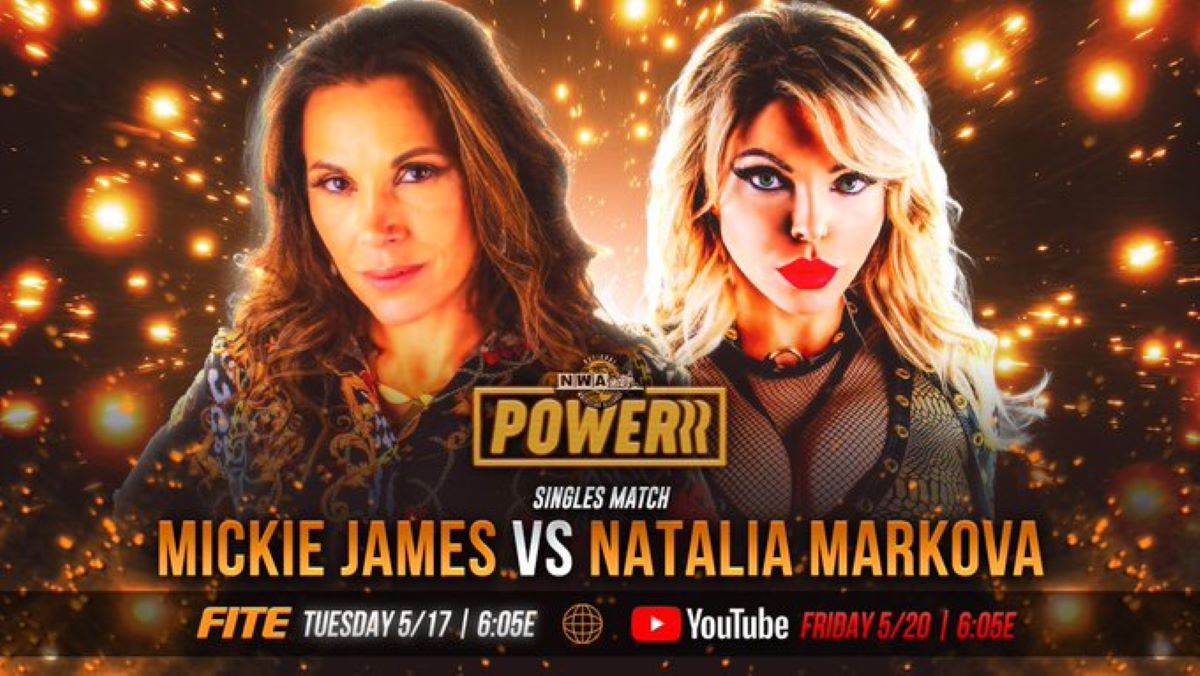 So, Terrell is now managing Markova.  Color me underwhelmed.

As the bell rings, they tie up and the veteran James outwrestles the Slavic Stunner™.  Markova starts to gain an advantage but James lands with a Thesz Press to punches, followed by a neckbreaker.  James covers but gets a two count.  James whips her to the corner, and as she rushes at her, she eats a boot and receives a cutter by Markova.  She covers but gets a two count on the veteran.  Now Markova whips James to the ropes.  She stalks her like prey and Markova starts to choke her out using her long legs.  It’s a rookie mistake as she celebrates early, and James fires back with chops and a choke to the Crush.  The Russian regains her composure and gets a big clothesline to cover James, but it gets Markova a two count.  Again, Markova tries to put away the veteran, and James fights out.  She hits the ropes, and Markova gets her into another sleeper hold.

She starts to fade but finds the inner strength and then James goes Hardcore Country and slams Markova backward on the mat.  She goes on offense with clotheslines and a flapjack to Markova and then goes up top for an avalanche Thesz Press to cover, but that gets another two count.  James sets up for the Mickie DDT, but Markova reverses to a Jazz Stinger for a two count.  Markova sends James to the corner and attempts the Beautiful Disaster corner kick, but James evades and manages to get a tornado Mickie DDT.  She covers for the one, two, and three.

James celebrates the win as the show goes to credits.

No single match stood out, but as a whole it was just a solid show.  Team War added some intrigue to the various trios, and the Main event was brief fun for James/Markova.  Still, a nice way to close out before going on the PowerrrTrip in Kentucky.