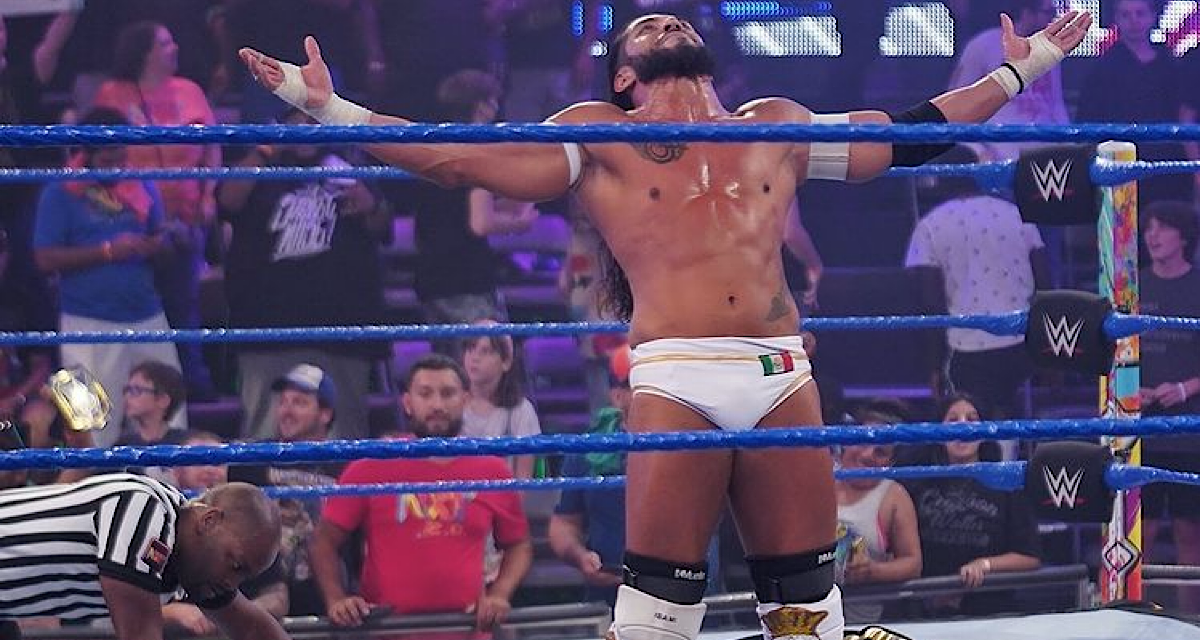 The headline might be jarring without the context. When stereotypically derivative mafia boss Tony D’Angelo brought in “Stacks” Channing Lorenzo and “Two Dimes” Troy Donovan the family feud with resident cartel Legado del Fantasma began. After various meetings, threats, and kidnappings, the true don of NXT was decided tonight as D’Angelo took on LDF’s Santos Escobar. The winner’s hand was raised in victory, but the pinfall wasn’t without its funny business.

The charismatic duo of Hayes and Williams make their entrance with microphones in-hand, and the former says he’ll be the next North American Champion. Upstart Sikoa is super over in Orlando, and his champion partner has been unwarrantedly suffering because of it. Hayes retains control throughout picture-in-picture, but Grimes makes the comeback to rile the crowd up. Sikoa steals a tag and ultimately hits the top-rope splash on Hayes for the pinfall victory. “I got next!” Sikoa tells Grimes.

NXT Tag Team Champions Pretty Deadly are interviewed about the title defense against the Creed Brothers, which they laugh off. “Two tasty snacks, one meal deal” are Pretty Deadly.

18-year-old Thea Hail has been signed by WWE – meaning she hasn’t graduated high school yet, as explained by her debut vignette.

The NXT Women’s Breakout Tournament continues, featuring a crop of rookie female wrestlers. “Confidence is never an issue for Lash Legend,” says commentary, and it’s true despite the inexperience. Paxley’s left knee is targeted, allowing Legend to advance with a pump kick. Her matches are never pretty, but to be generous, there’s a slow improvement happening.

NXT Champion Bron Breakker makes his first appearance since being kidnapped by Joe Gacy and two druids, who happen to appear atop the ringside podium. Breakker rejects the opportunity to join Gacy, and the latter pushes back with a spiel with oomph to it for once. Breakker accepts Gacy’s challenge for NXT In Your House, where the champion will lose if disqualified.

“For the first time in my career, I’m flying solo,” says Indi Hartwell. After getting humiliated by Mandy Rose, Hartwell responds, “You say that you’re the measuring stick of this women’s division? Let’s see where I measure up to you when I take that stick, and I shove it up your ass.”

Speaking of flying solo, Wes Lee is interviewed backstage about Xyon Quinn ducking him. Nathan Frazer runs in and offers himself as replacement, but Lee says, “I have a lot of pent-up aggression towards Xyon, and I do not want to have to take it out on you.” Lee, now unexpectedly a singles wrestler, has really held his own so far.

The Viking Raiders vs The Creed Brothers w/ Diamond Mine

Damon Kemp, brother of Gable Steveson, and Roderick Strong are ringside watching the big meaty men slap meat. The Creed Brothers look amazing with an insane combination of strength, agility, and intensity as Brutus cannonballs to the floor preceding commercial. It’s a demolition derby but so incredibly smooth, and the hard-hitting, high-flying offense brings Orlando to its feet. But when Strong attempts to assist the Creeds, Julius pushes him away letting the Viking Raiders gain the pinfall victory.

It’s Legado del Fantasma’s turn to respond to Tony D’Angelo and his boys. Santos Escobar says his stable won’t be ringside. “Hermanos, you know how you can help, and you know exactly what you need to do,” he tells Joaquin Wilde and Cruz Del Toro.

Backstage, Tiffany Stratton tells Grayson Waller to “take care of this Andre Chase situation.” Meanwhile in the parking lot, Bron Breakker is approached by Duke Hudson, who accepts the champion’s in-ring challenge for next week.

Waller is so underrated, and he’s undoubtedly main-roster bound. He gained momentum after altercations with Johnny Gargano, AJ Styles, and LA Knight, but he’s now meddling with the professor and Sarray. Chase makes a comeback but inadvertently sends Waller into Bodhi Hayward ringside, which allows the Aussie to hit his rolling stunner for victory.

Toxic Attraction is in the Toxic Lounge, asking each other why everyone’s obsessed with them. “There’s not enough respect on Toxic Attraction’s name, and we need to change that. And it starts with Indi Hartwell,” they say.

Diamond Mine is arguing amongst themselves backstage, and Roderick Strong tells Damon Kemp to attend to the Creed Brothers. NXT Tag Team Champions Pretty Deadly come in, and Strong issues a tag team challenge with Kemp.

It’s a video game player versus an accountant to determine who has the lamer gimmick. In actuality, it’s another matchup in the Women’s Breakout Tournament. Perez has the crowd behind her, but James takes majority control. Perez is sent into the corner, but a sunset flip, Pop Rox, puts it away. The in-ring abilities of both competitors was miles ahead of the previous tournament bout of the night.

Cora Jade congratulates Roxanne Perez for her victory, but Elektra Lopez interrupts. “What is your problem?” Jade aptly asks. “When I look at what’s in front of me, neither one of you are,” responds Lopez.

As expected, the speed and athleticism on display is awesome, and Frazer gets the upper hand with an outside dive. Lee gets a couple nearfall attempts before escaping the Phoenix Splash, but Von Wagner comes in to decimate both competitors. He throws Lee over the ropes, making his body ricochet off of the announce table. Hot take, but Wagner has the look and intensity to become something big.

Sanga takes Lee and Frazer’s side but mistakenly says “two men of your size.” Lee takes offense and wants to prove that “you don’t have to be 10 feet tall to be successful around here.” Sanga stands up, absolutely dwarfs him, and respectfully walks away.

“We’re about to find out which family runs NXT,” says commentary. Dueling “Santos” and “Tony” chants accompany the opening goings where the latter gains control preceding picture-in-picture. Escobar comes back with an outside dive and targets the left arm of “The Don,” who recuperates with clotheslines and belly-to-bellies. Escobar delivers a top-rope hurricanrana, which results in a prolonged muting of “holy sh-” chants before Legado del Fantasma and D’Angelo’s boys brawl ringside. Escobar uses the distraction to pull out brass knuckles for the pinfall victory, “following in the footsteps of his hero to ‘lie, cheat, and steal.’”

Joe Gacy is back on screen, saying Breakker’s “lack of control” will deliver him “full control of the NXT Championship, the brand, and the world!”

The best part of tonight’s NXT was the variety – which last week obviously lacked. There was a lot to enjoy, especially Creed Brothers vs Viking Raiders, Wes Lee vs Nathan Frazer, and Santos Escobar vs Tony D’Angelo.