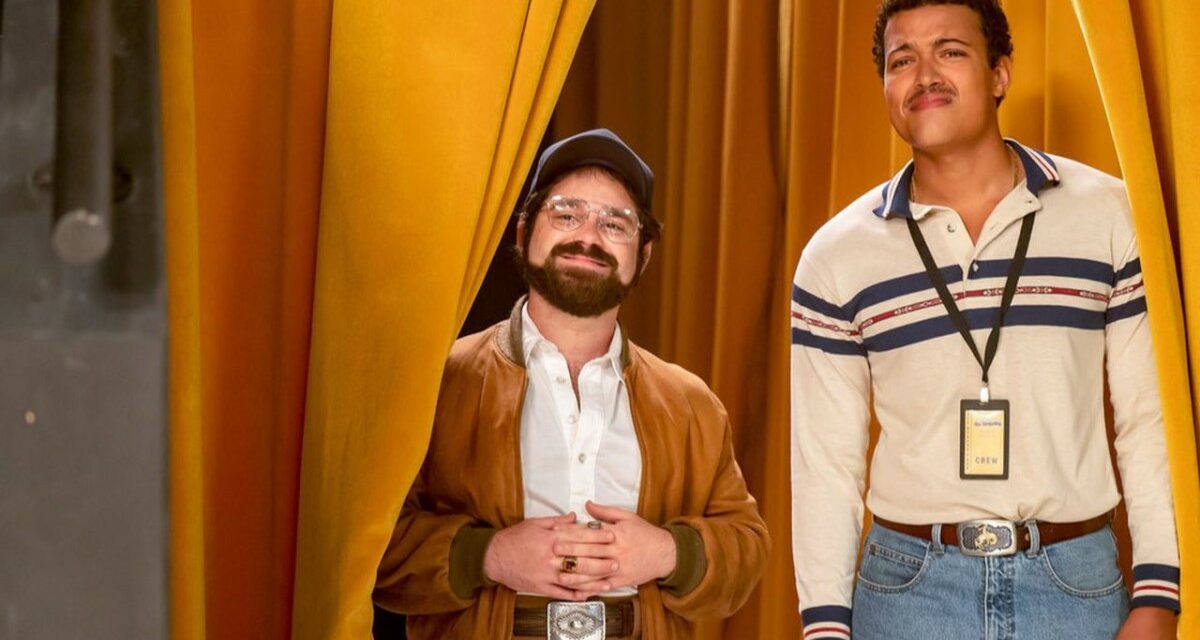 This week’s episode of Young Rock, titled “Rocky’s Code” is really a tale of three characters. Stacey Leilua gets some more time to shine as the wrestling-weary Ata Johnson; Kevin Makely gets to go full Macho Madness in some gonzo comedy scenes as Randy Savage; and Joseph Lee Anderson portrays Rocky Johnson as both worn-out and optimistic, while acting out some powerful moments that the real-life Dwayne Johnson (in a fictional 2032 setting, that is) points to as inspirational for how he has lived his own life.

We check in first, as always, with presidential candidate Dwayne Johnson, now mere days away from the end of the campaign (although he’s been mere days away for weeks now, so that’s getting kind of old-hat). Johnson announces to his very surprised team that he’s taking the day off to go have lunch with a friend, something he and this person do on the same day every year. Randall Park, an interviewer and former actor in this imagined future, joins him to give Johnson a chance to talk about his past. Who is this friend? Well, it’s no wrestler, and it’s such an unexpected cameo that I’ll leave it you to enjoy.

The first part of the episode focuses on young Dewey Johnson, played by Bradley Constant, struggling with watching his dad put himself through the rigours of wrestling as he has for years, but now starting to show the accumulated aches and pains that come with his chosen career. Downtown Bruno (Ryan Pinkston), tells Dewey that he knows Rocky wouldn’t have it any other way, but Dewey is desperate to help his dad.

Another wrestler lends his voice to assuring Dewey that his dad is committed to his decisions and living by his code — and what a gravelly voice it is. Randy Savage, who in 1985 was working with Jerry Lawler in Memphis, grabs a lot of screen time in this episode, but he begins by telling young Dwayne that any dreams his dad has of making it back to the WWF are gone. Foremost on Savage’s mind, though, is his endorsement opportunity with Sears as they open up a new store. There he is, with some Brutus Beefcake-sized clippers, cutting the ribbon and welcoming customers to the store. And showing them the weed whackers. And later being asked to leave by the store owner.

On his way out, though, Savage is gifted a big pack of Slim Jims, which he will surely happily snap into.

Savage’s then-wife, Elizabeth (as played by Sarah Gattellari), gives Ata a chance to spend some time away from wrestling and talk about anything but. Although, as they talk about movies and get onto the topic of Highlander (from 1986, but close enough), Ata says she knows of it because her nephew Sam Fatu had a role in it, and so the conversation inevitably winds its way back to wrestling again. Both Ata and Elizabeth spend the scene seemingly aware that they need a break from that world now and then, but they also both know it won’t ever be for long.

Rocky, meanwhile, has his own somewhat conflicted emotions as he is pleased to see Bam Bam Bigelow leaving the Memphis territory and headed to work for Vince McMahon, but is still convinced that he has more great runs left in him. Lawler sets up a meeting between Johnson and promoter John Jarvis to bring Rocky in as the main event of his show. On the way to the event, Rocky and Dewey revisit a theme from an earlier episode in which both duck down to avoid the image of two coloured men driving through a small, mid-western town (for Rocky, the demarcation point of a town that might cause trouble is less than 1,000 population).

It’s played for laughs, but its also a harbinger of what’s to come. Arriving at the show, Rocky is thrilled to see a private dressing room waiting for him, and half of his payment ready up-front as well. Things go south quickly, though, as Jarvis sets Rocky up for a filmed promo upon his arrival, with the main set piece being a plate of fried chicken and watermelon slices. Without skipping a beat, as 2032 Johnson tells the story, Rocky turns aside the job that he desperately needs and walks out — although he does keep the up-front payment for what he calls “racist tax”.

These are stories that real-life Rocky has told before, and his plea to Dewey in the show to not let anyone “change who you are” sticks with the future Rock. Dewey spends much of the show looking back fondly on his own youth and seeing his dad as a physical super-hero, but he closes the show, after Rocky goes as far to refuse a free meal offered by a fan working at a restaurant and instead gives the money to her, by seeing that his father was still his hero, but simply in a new light.

The word that Dwayne Johnson has often used to describe his relationship with Rocky is “complicated”, and that dynamic has been explored in the series. This week’s episode puts those complications to the side, though, and chooses to focus on what seem to be the best parts that Dwayne remembers of his father.

Check out our Young Rock review and interview archive below, and catch new episodes weekly at 8pm EST on NBC (and on CityTV in Canada) as SlamWrestling.net continues to feature interviews with the cast and crew along with episode reviews.