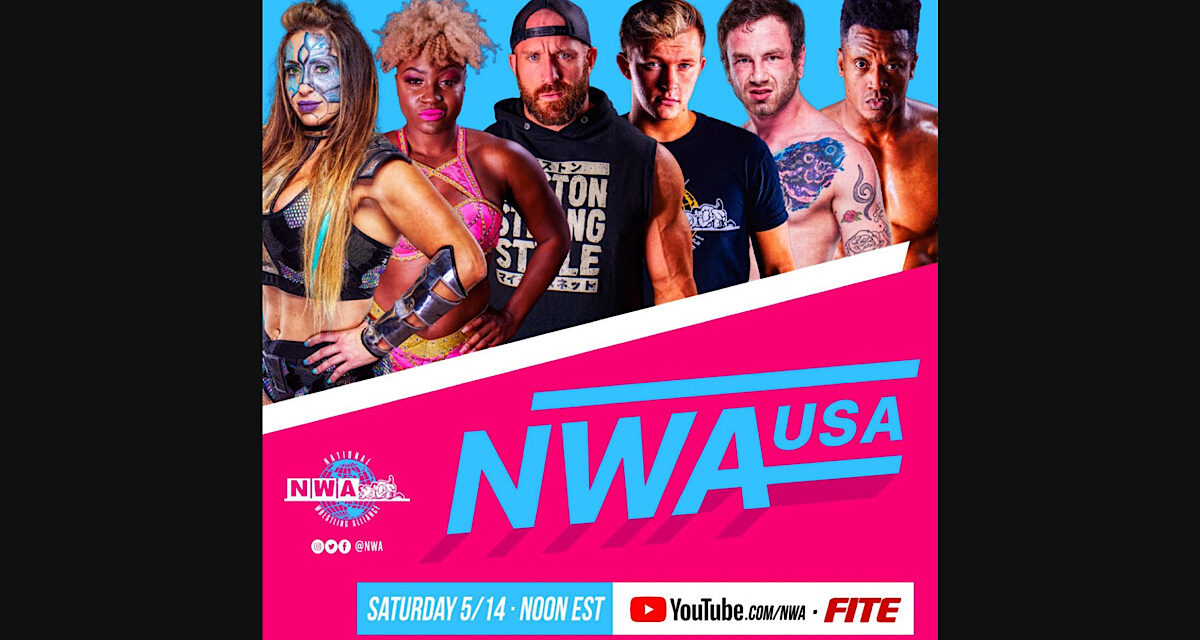 Caprice Coleman is The Ageless One in the National Wrestling Alliance, and he is looking to mix it up on NWA USA with the self-proclaimed “Last Bastion of Professional Wrestling” Colby Corino.  It looks to be a classic match of the ages later in the show.

But the show starts with a cold open, as May Valentine is with Jennacide talking about her loss to KiLynn King and Chelsea Green for the number one contender match.  Jennacide gives props to both women, but she is pissed she lost the match.  Interestingly (and she is right), neither woman pinned her.  She wants tough competition, and she wants beautiful violence, and that’s why she asked management for this match tonight against newcomer MJ Perkins.

This looks like another action-packed Saturday show, as we come to you from the Skyway Studios in Nashville, TN.  Joe Galli, Velvet Sky, and special guest Madusa have the call.  With no time to waste, let’s start off with the First Match of the NWA USA, and it’s… 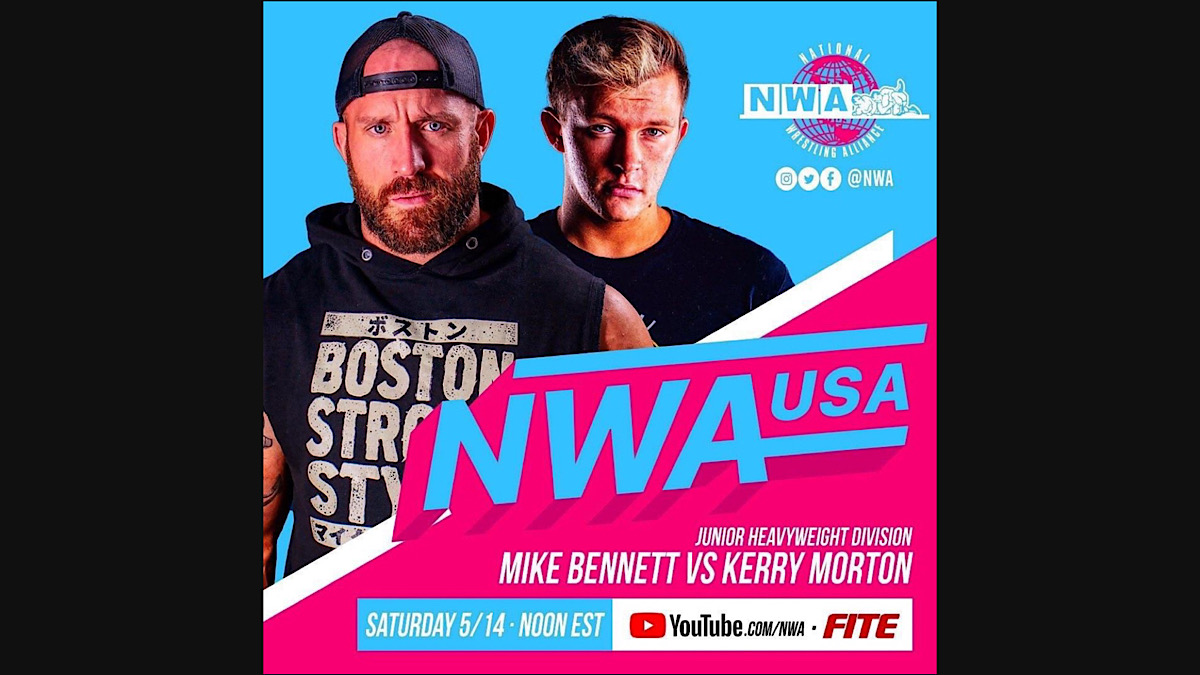 Morton starts out strong with The OGK member, but it’s not long before Bennett lights him up with chops.  Now Bennett is fired up on the “Future Legend,” and hits a DVD but gets a two count.  Morton gets a Kick to the chest, and Bennett rolls out of ring.  Morton follows with a double axe handle, but the veteran Bennett returns with a chop and a boot on the outside of the ring outside, and throws him back in the squared circle, and nails a spinebuster.  Bennett covers for another two count

Bennett and Morton are going to steakhouse as there is a lotta chops by both combatants.  Morton breaks it up with a Pele kick.  Bennett sends him to the corner, and Morton jumps and gets a springboard crossbody, then a steamroller.  He lowers his knee pad to go for the running knee finisher and misses.  Bennett gets superkick to a chokeslam to cover for a two count.  Now Bennett attempts a Piledriver, but Morton reverses to an Eat Defeat to cover but The Future Legend gets another two count.  Bennett delivers a brain buster, followed by a rolling discus and good night, Morton.

Your Winner via Pinfall:  Mike Bennett

There’s a show of respect and honor by both men, as Bennett is magnanimous in victory.

Gaagz the Gymp is the highlight on this Shoot Segment in Sixty Seconds, and he says…nothing.  He does unzip the mouthpiece to show the tongue, and…yeah.

(Author’s Armchair Booking:  If no one has suggested it, may I recommend opening the Forbidden Door and get Danhausen together with Gaagz for a match.  Just a suggestion.)

And now for some formidable femme fatales, its’… 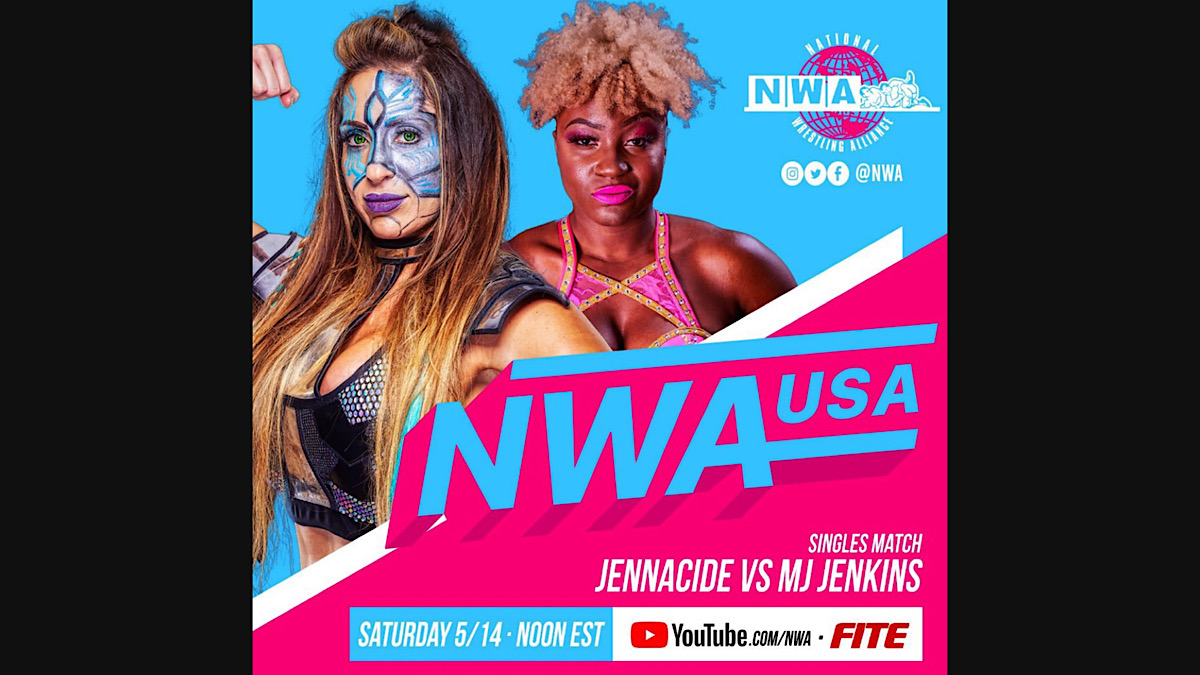 Jenkins is billed from Brooklyn, NY and Kyle Davis introduces her as “A Whole Lotta Woman,” and that’s not hyperbole as Jekins looks quite the powerhouse.  For those of you not familiar with her on the indie scene, on a scale of one to Jade Cargill, Jenkins looks closer to a “Big Swole” type of female wrestler.

Both women are evenly matched during lockup, but it isn’t long before Jennacide gets a Bionic Boot.  Then it’s a suplex by the Bionic Beast to Jenkins, but she returns the favor with a flying headscisssors and then a leg lariat to cover, but Jennacide kicks out at two.  A Chop to Jennacide’s chest echoes in the ring, and the Bionic Beast returns the receipt.  Jenkins busts out some innovative offense with a rolling dropkick to cover and that gets a two count.  She sends Jennacide out and attempts to use the ring ropes for a dropkick to the outside, but it’s scouted and Jennacide twirls her around and kicks her on the side of the head.  Back in the ring, there’s forearm shivers by both women that lay them out.  Jennacide gets back up first and hits a swinging slam for a two count, but Jenkins gets back up and does her variation of a Black Hole Slam to cover, but it’s another two count.  She tries to pick her up, but Jennacide reverses into the Judgment Day finisher for the pin and the win.

After the match, Natalya Markova sneaks up behind Jennacide and lays out with a chair.  Before “The Crush” can add more damage, Jenkins comes to her aid and Markova beats a hasty retreat.  This has all sorts of potential for a feud down the road.

Earlier today, Joe Galli interviews Ricky Morton, and after forty years he’s back in the NWA.  As Morton reminisces with Galli about his time in the ring, and his sons Kerry and Jonathan and the memories the NWA invokes, Galli gets to it and asks the 65-year-old Rock and Roller when the end is coming up.   Morton says he’s still in his prime.

Now it’s time for the Main Event, and it’s… 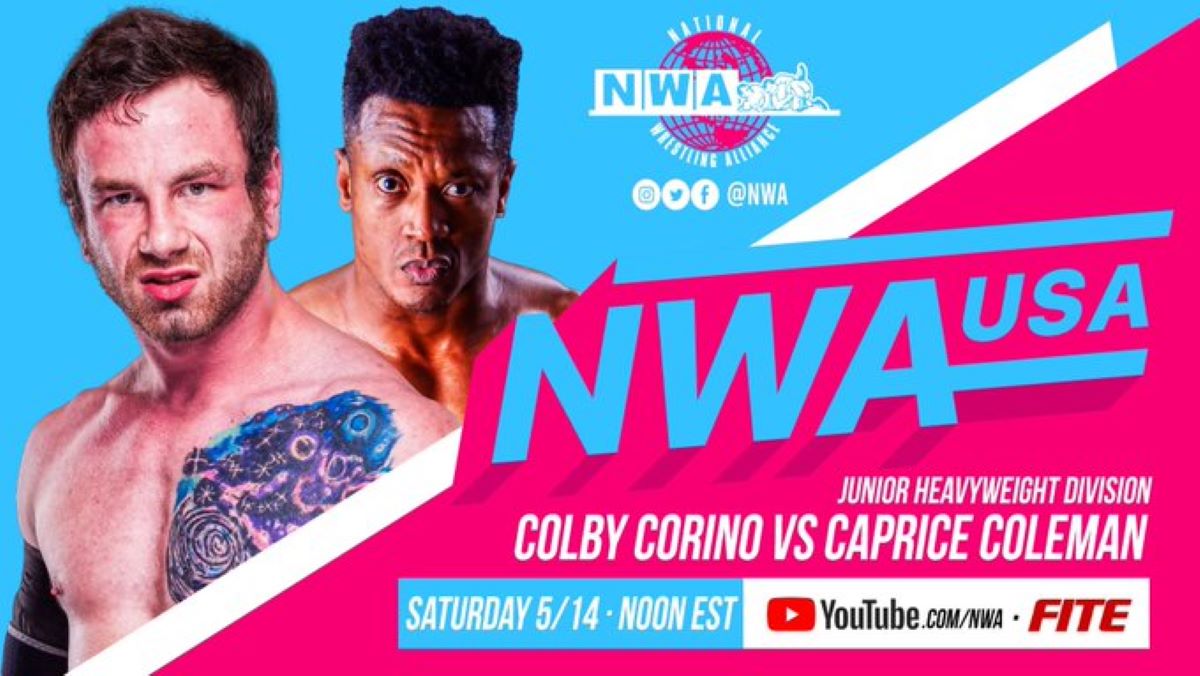 “The Last Bastion of Professional Wrestling” Colby Corino vs. “The Ageless One” Caprice Coleman

Definitely no love lost for Crino, as the crowd shower The Last Bastion with a chorus of boos.  The bell rings and it’s a feeling out process as Corino doesn’t lock up right away and just plays around, but Coleman catches him cause that’s what he does.  Corino gets tripped over Coleman, and The Ageless One takes The Last Bastion to school, pummeling him in the corner.  Coleman rushes and Corino gets the ref in front of him to block his momentum.  As Coleman steps back at the ref’s command, he goes back to the attack, but Corino chop blocks his leg, and now he’s in the driver’s seat.  But the offense is short-lived as Coleman comes back with a leg lariat variation that gets a two count, and Corino goes outside for a breather.

Coleman goes after him, but Corino hits his signature slingshot spear that gets a one count, then a Colby Crush follow up garners a two count.  Corino nails with a bottom rope Moonsault, then a middle rope Moonsault.  Corino gets cocky and goes up the top rope for the final Moonsault, and Galli notes, “there’s no water in the pool” as Coleman gets out of the way and Corino gets a nice bellyflop for his troubles.  Coleman regains control with a springboard double leg lariat, and a leg drop to back of Corino’s neck that gets a two count.  Again Coleman sends him to the corner, but Corino gets a boot up in his face.  Coleman responds with a leaping huracanrana to Corino.  Back to the corner, Coleman goes after Corino, but ref gets him to separate again. Corino uses the time to reach into his trunks for a foreign object, clocks Coleman with it, and gets his Sonsetter finisher for the one, two, and three.

Once again, through The Power of Douchenozzlery™, Corino ekes out another win, and he gets another win under his belt as the show goes to credits.

A solid show, and Morton continues to shine in each match.  Jenkins was another pleasant surprise, and it would be interesting to see if she and Jennacide team up for tag action down the road.

Corino just works best as a heel and he and Coleman had a very old school face/heel matchup, with Corino cheating to win in specatuclar douche-tastic fashion.

Until then, see ya next Saturday