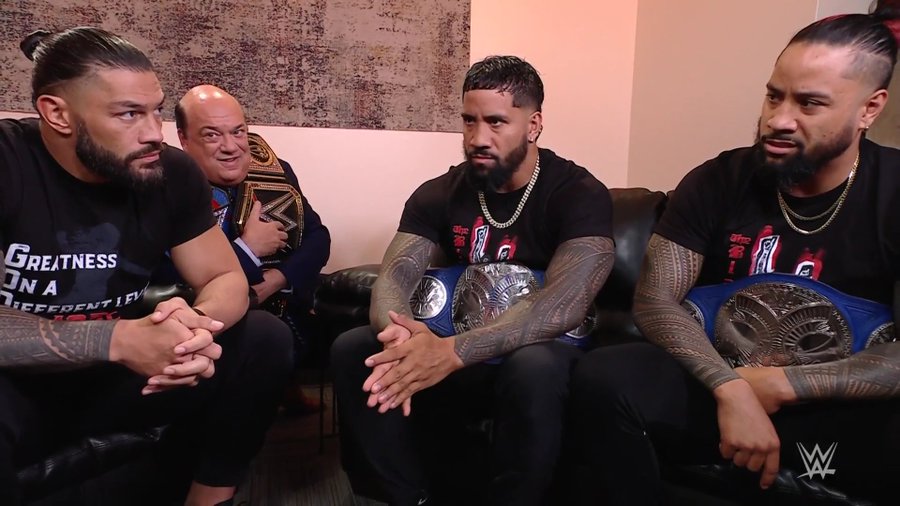 Forgive me for sounding like a complete psychopath, but we are in for an exciting night of grunting, screaming agony, dripping water and insulting back talk. Who doesn’t enjoy that?

After WrestleMania Backlash on Sunday, Ronda Rousey was finally able to get Charlotte Flair to yell “I quit” with so much torment. I dare say, it was enticing. It was later mentioned that Flair will be absent indefinitely due to her arm being cracked in all places because of Rousey’s ‘arm bar’ hold at Backlash. At least Rousey won her Women’s SmackDown Championship title. Her match against Flair was painfully raw to watch. So much anger and intensity shook both the audiences at home and the ones at the live event location. There were a lot of laughs coming from me.

During a SmackDown exclusive, Rousey was seen showing off her winning belt with her baby girl for a photoshoot. The Baddest woman on the planet did just that. Dominating everyone.

And speaking of showing dominance, Sami Zayn makes an appearance tonight as an official member of the Bloodline. On behalf of the Bloodline, Zayn addresses RK-Bro after they demand to become the Undisputed Tag Team Champions by calling Roman Reigns out. If Riddle beats Zayn, RK-Bro is granted their Unification match against the Usos.

Zayn struggles to answer, which I love to see, whether or not he accepts the fight. He is, after all, the one calling the shots as Randy Orton spat out as they chant “Rusty” towards Sami. He does look like rust though.

Sami begins to squirm as he states that the match might not happen tonight, “maybe in a week or two,” he says. Adam Pearce shows up behind him to contradict what Zayn said and proceeds to make the match official between Riddle and Sami for all the fans who came to witness an ass whipping.

Sami prepares himself for his ‘Helluva kick’ only to have Riddle’s bare feet in his face. Arg. Gross if you ask me. Riddle retaliates by attempting to cross body Zayn, but Sami manages to push Riddle right off the turnbuckles and into the barricades.

The most amazing thing happens next, Riddle climbs onto the turnbuckles to perform a ‘Super RKO’, yet he gets punched off. Zayn jumps from the ropes and quickly gets a knee to the face by Riddle. I said “ooh” when I saw that. And yes, I was in awe at Zayn’s pain.

Orton was seen so fired up during this match that he applauds Riddle after he leaps off the second rope, spins and lands on Zayn in front of the announcement table.

Riddle did something I never expected him to do and that’s a slight impersonation of Randy’s double fist slams after he basks into the crowds’ praise and prepares to RKO his opponent. Although, he missed his chance because Zayn left the ring. He must have heard loud thuds.

Zayn gets upset at the official after Riddle successfully returns to the ring before the count out. It has become Zayn’s finisher to wait for a count out win. He did it with Shinsuke Nakamura, and he hoped to do the same with Riddle. Absolutely pathetic.

Riddle turns the tides on Sami again by flipping him around having his head facing the mat and slams him onto it for the win.

Ronda issues a challenge for the SmackDown Woman’s Championship here tonight and guess who takes it? — Newcomer Raquel Rodriguez, of course. She may have had one match so far against Cat Cardoza, but let’s be real, that was hardly a match if she won so quickly. I mean it was lightning quick.

Rodriguez accepts and the bleeding begins.

Rodriguez places Rousey onto her shoulder causing her to be bent as you hear Ronda scream before managing to unshackle herself.

According to Michael Cole, he thinks it’s good that Rousey issued this challenge, but he believes Raquel shouldn’t have been the opponent this early. “Maybe she [Ronda] should have waited a week to recuperate a bit from Sunday.” Perhaps, but who’s going to stop her really?

I always found it funny when wrestlers would attempt to power bomb someone with their stomach from the second or third rope backwards only to land on their own backside after their opponent moves out of the way. Rodriguez did that, and I laughed a bit too much.

Ronda places Raquel into an ‘ankle lock’ but immediately gets thrown onto the ropes and spins off. Raquel takes that opportunity to grab Ronda to power bomb her onto the floor only for Rousey to surprise us with a reverse roll up for the win.

Great courage, Rodriguez, but not tonight, my dear.

Backstage, Shotzi regals us with the fact that she’s angry, angry because she was on her way to accept Rousey’s challenge of a title match only for Raquel Rodriguez to literally push her out of the way. Classic mood. Aliyah shows up too, wanting the same thing after being locked in the closet orchestrated by Shotzi. They both demand a title match as they bicker to Adam Pearce. It’s not the end of that conversation, folks. Just a momentary pause.

No time for that now because Madcap Moss is here tonight with Kayla Braxton, still in his frenzy of winning the Andre the Giant Battle Royal match a couple of weeks ago. Still yelling “Woo!” any other day.

After Moss says that this is the biggest victory he’s ever had in his career, I could have sworn I heard Pat McAfee say: “What? Third place?”

Madcap says he was finally able to look past Nappy Corbin’s lack in good tattoos and bald head to really see himself go further by attempting to have a mix match with Sasha Banks. Have a Money in the Bank contract too. How swell. Until Moss gets hit from behind repeatedly with a steel chair by Corbin. Nappy places Madcap’s head between the spaces in the chair then proceeds to use his Andre the Giant trophy to inflict further agony onto Madcap’s neck before the officials arrive with medical help. Why are they always late?

One of the hospital men looked remarkably uncomfortable on camera once Corbin shows up near the truck to taunt Madcap more. With all honesty, I believe Nappy Corbin is one of the most hated wrestlers on SmackDown thus far. What do you guys think? Am I not going far enough with my insults?

Natalya sends a cheap shot towards Naomi after plummeting Sasha onto the mat. Nattie tags her partner, Shayna, and she grabs Banks by the waist allowing Natalya to knock her down through the throat.

It seems enough for the win till Naomi stops Shayna from claiming it. Naomi pushes Nattie out the ring before going to Baszler with a cross body from the edge of the ring to the barricades. This was a setup for Shayna after she injured Naomi’s shoulder.

Nattie and Baszler attempt to cheat again by using the ropes as leverage, but unfortunately for them, the referee notices and stops the count. As Natalya ducks out of harm’s way from Naomi’s kick, which hits Shayna, she rolls Naomi up and fails before getting a knee in the face.

Sasha performs her ‘Backstabber’ move on Shayna, so she could let go of Naomi, allowing her to roll up Nattie after she was looking for the ‘Sharpshooter’ move and fails giving the champs the win.

Drew Gulak seeks advice from Ricochet, our Intercontinental Champion, about how he can stand up to Gunther after a powerfully humiliating defeat of their match weeks ago. Gulak was going to show Gunther one-for, except he didn’t get the chance to because Gunther pushed him against a door and rips his shirt off just like that as if he were a stripper prior to slapping his chest. I laughed a bit because of my thoughts, of course. I just called the man a stripper.

Riddle and Randy Orton strike again as the Bloodline arrive on SmackDown. RK-Bro have been waiting for an answer to their Unification Match with the Usos, which I thought was already given only to recall that when they were brought together to sign the contracts, a brawl unfold, so yeah, my mistake. Doi.

Roman Reigns felt the need to come for John Cena of all people, and Randy defends him, rightfully so. Reigns is good, but Cena is better. “Believe that!” shouts Orton. You want to know what else? Orton says that the Uso twins share one noggin, so he taunts them by slowing his tone for someone with only one brain cell could understand about wanting the Unification Match to happen. Especially after their loss at WrestleMania Backlash.

Suddenly, folks, suddenly Riddle gives a knee to Roman Reigns’ face after he grabs his unified titles from Paul Heyman. I didn’t expect that. Heyman looked like he was able to faint back there. Even Randy was shocked, but happy as RK-Bro retreat. Next Friday, the fight we’ve been waiting for is here.

Kingston throws Butch outside the ring then follows him to deliver a kick as he leg slides, but Butch moves out of the way as both Sheamus and Ridge Holland try to intimidate Kofi till he is grabbed by the hair. Kingston gives a kick to Butch’s ear before jumping back into the ring.

Kingston jump kicks Butch, and he returns a fast one as well. Sheamus tries to distract Kofi until Xavier Woods grabs the man by his ankles and drags him right off the edge. Due to that temporary woozy nonsense, Kofi lost by allowing Butch to swing him around and slam him onto the mat for the win.

And having that in mind, Butch still goes rampant by celebrating in the crowd before coming back. Strange man. Stranger than me.