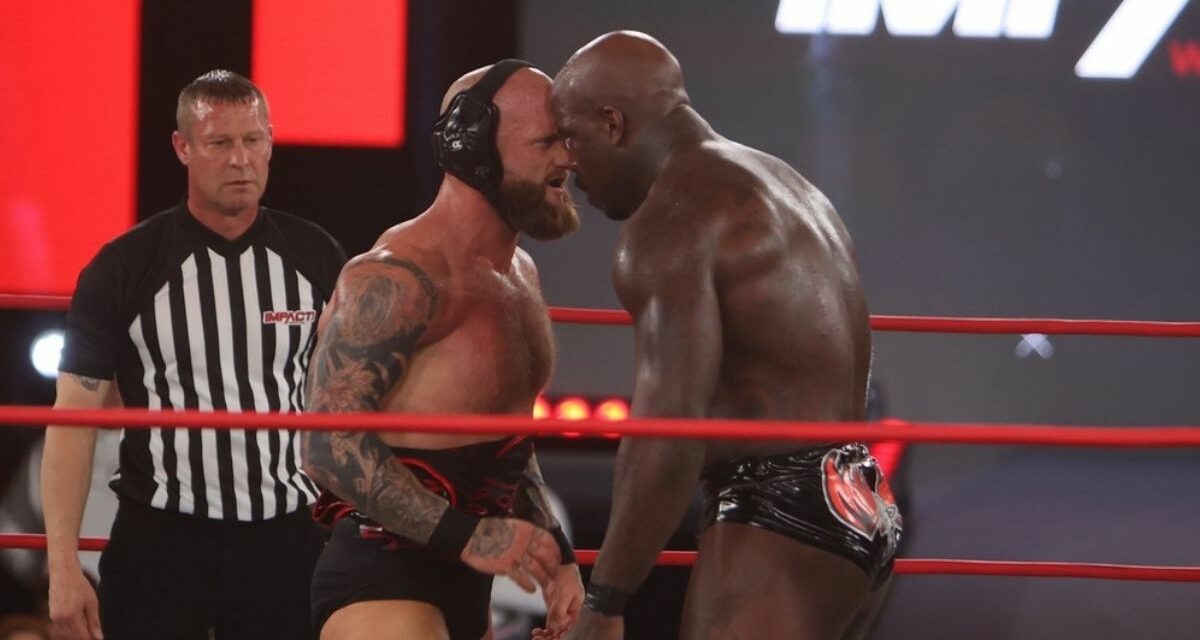 Greetings and salutations everyone and welcome to this weeks Impact TV report. We have a new World Champion and an Impact+ special on Saturday May 7 to set up. That only leaves us with two TV shows to get a full card in place. Without further ado, lets get to it.

The show kicked off with a recap and results from the Rebellion PPV.

The show started with Violent By Design heading down to the ring as the reining, defending Impact Tag Team Champions. Eric Young was the first to speak. He claimed that after they survived the 8-Team Scramble they are still champs. He also said that the world doesn’t belong to “You” but it belongs to “Us”. As he continues gloating about their Rebellion win they were interrupted by Heath and Rhino…

Heath and Rhino make their case to be next in line for a Title shot but they were suddenly interrupted by……DEM BOYS, The Briscoe Brothers. 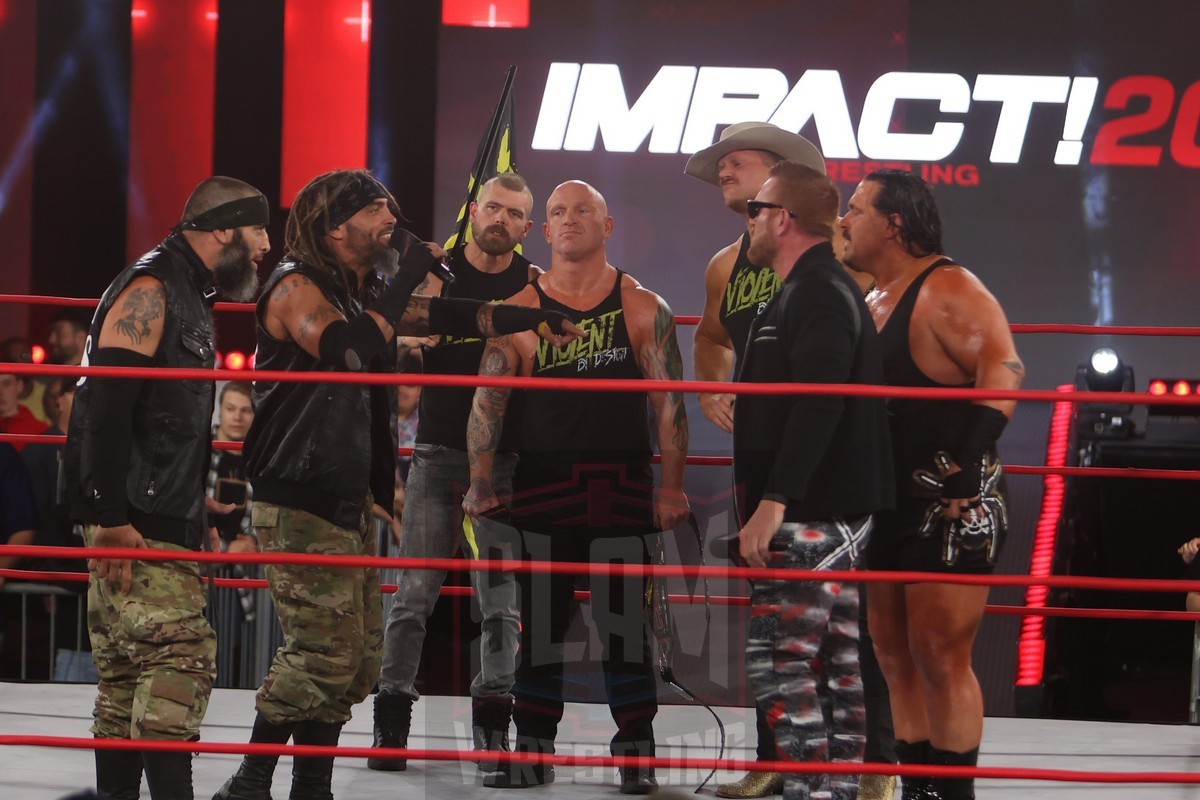 Mark and Jay Briscoe are officially in the Impact Zone. The crowd went wild for them as they made their way down to the ring. Jay grabbed a mic and he said that there is some unsettled business after the Multiverse of Matches. Heath was not too happy by the interruption Heath made a point that they should be next in line for a Tag Title Shot. The Briscoes were getting slightly heated.

Eric Young then said that since this squabble doesn’t affect VBD then they will just leave, and they leave Heath,Rhino, and the Briscoes to continue their war of words. This leads us into a challenge and a match between both teams.

It was made clear by the commentators that a future Impact Tag Team World Title Shot was on the line in this match. The match started off with the Briscoes in full control of Heath and Rhino. This match seemed more like an A$$ beating and showcase for the one or two poor souls that don’t know who the Briscoes are. 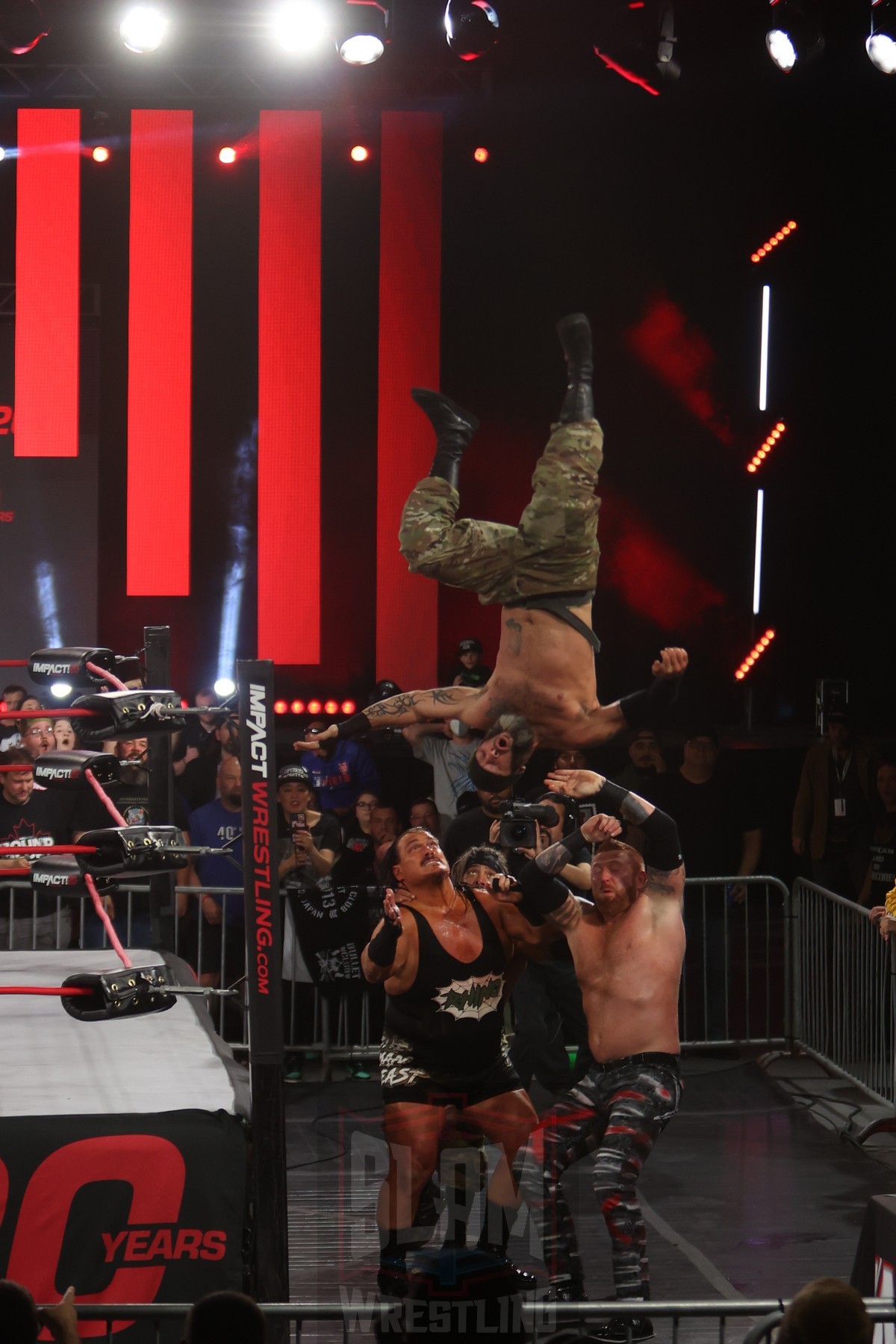 Heath and Rhino did eventually get some offence in but after a bit of time Mark Briscoe eventually got the hot tag and after some double-team offence, Mark hit Rhino with a top-rope elbow drop. He quickly went for the pin and the WIN! Briscoes will now have a World Tag Team Title Shot soon….

We are backstage and Moose is confronting Scott D’Amore. Moose said that he gave Impact a historic match and the best match Impact has ever had. The rematch is set for tonight and D’Amore mentioned to Moose that the winner will face off against a hand-picked opponent at the Impact+ Special Under Siege. Moose didn’t seem to happy about any of this…

We see images of W.Morrissey and Deonna Purrazzo flashing along with a “Coming Soon”….

VSK started the match with the early advantage but that ended quickly as Gujar hit VSK with a thunderous Samoan Drop. Gujjar now had the full advantage of the match and delivered a middle rope spear for the quick win.

After the match Raj Singh and Shera come to the ring and beat up an already defeated VSK. There was now a stare down between Shera and Gujjar. 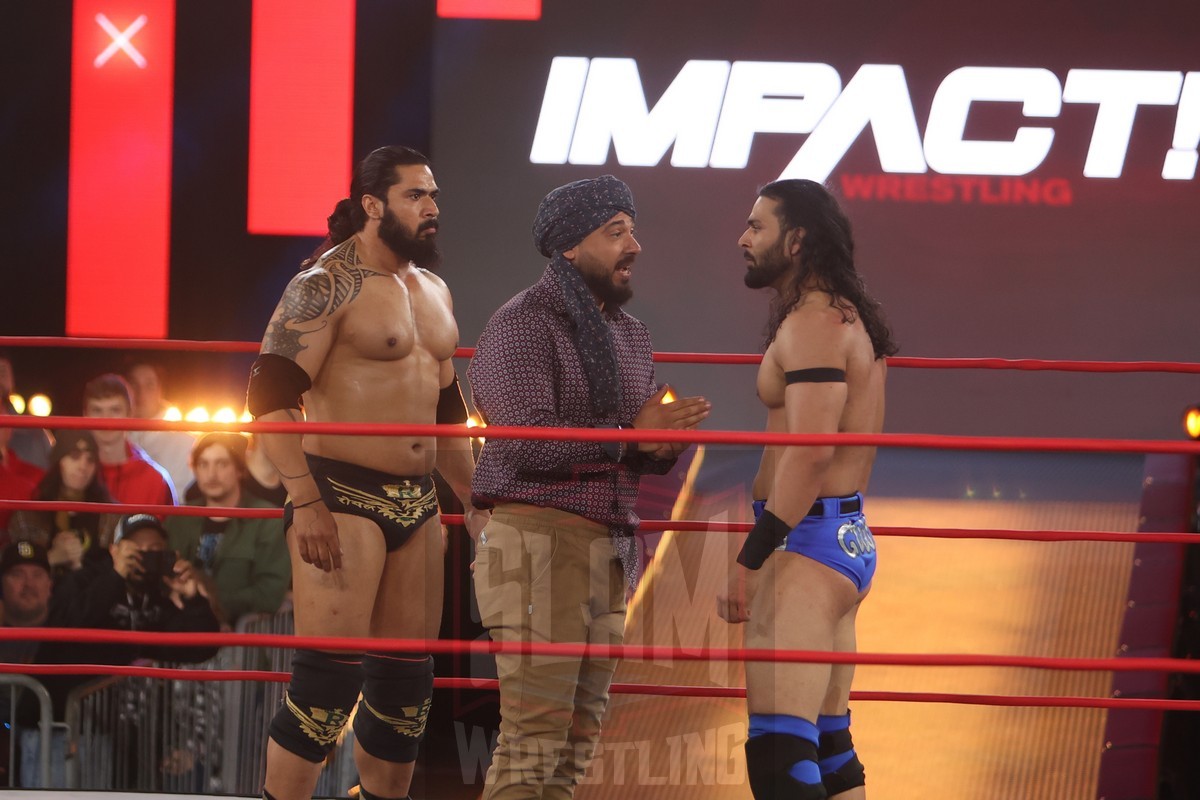 Mahabali Shera and Raj Singh talk with Bhupinder GujjarI at the Impact Wrestling TV taping, done on April 24, 2022, in Poughkeepsie, NY, and airing on April 28. Photo by George Tahinos, https://georgetahinos.smugmug.com

New Impact X-Division Champion Ace Austin was standing by with Gia Miller. Austin was cocky saying how he beat Trey Miguel and Mike Bailey all on his own. As he continued gloating, Rocky Romero interrupted him and laid down a challenge to Austin.

As Romero said that D’Amore gave him a match against Austin, Mike Bailey interrupted him and the three men got into a war of words. Austin blows everyone off and walked away.

A Steve Maclin promo aired where he stated that he should be next in line for an Impact World Heavyweight Championship match.

As the match started Edwards gets some huge offense and takes out MCMG & Bailey with a suicide dive to the outside. Honor No More controlled the early part of the match until we returned back from commercial break. Bailey & Taven squared off in the ring before Edwards was tagged back in. Bailey with a sunset-flip double knees. 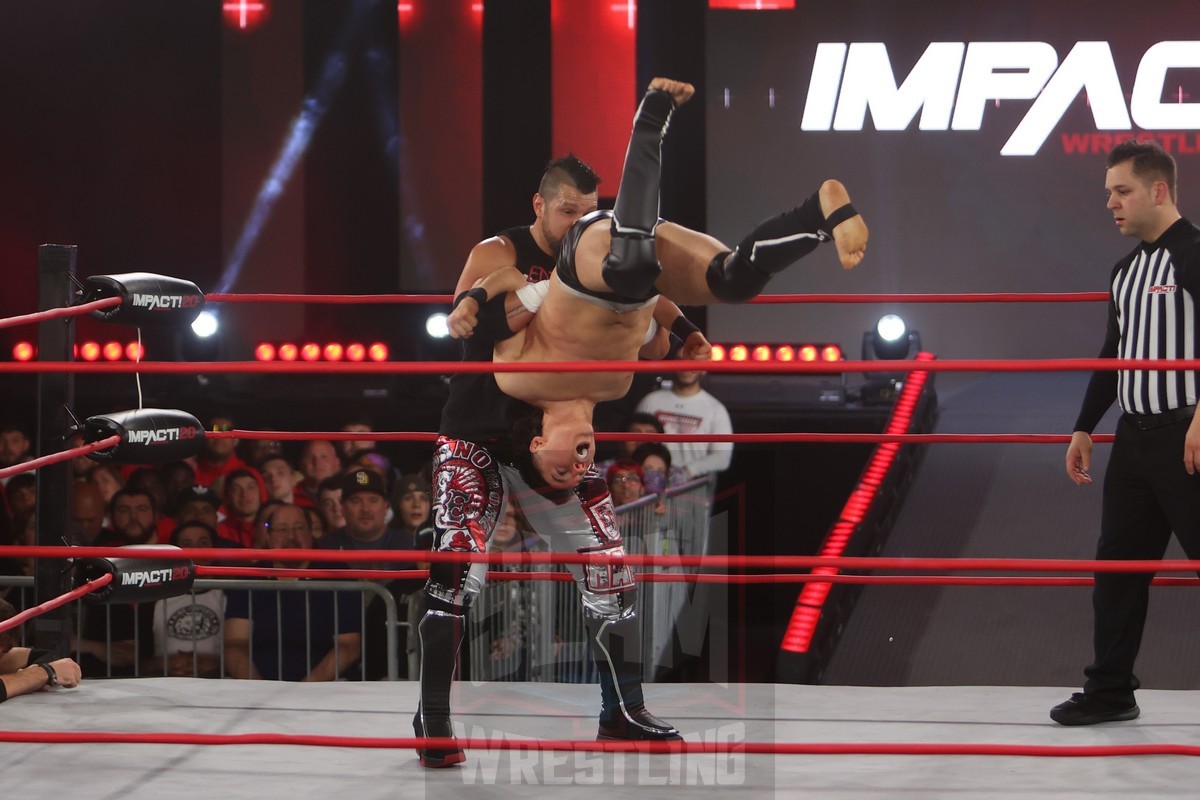 Sabin is tagged in and MCMG go to town on anyone that dares to enter the ring. Bailey and Bennet were then in the ring for a bit and it essentially turned into a chop-fest and Bailey hit a twisting moonsault for a two count.

Honor No More then team up against Bailey but he was saved by Motor City Machine Gun. As Bailey gets the advantage over all of Honor No More the crowd gets firmly behind him.

It was complete pandemonium int he ring as all six men were fighting in it. As the sides cleared Edwards hits the Die Hard Driver on Bailey to get the win for his team, Honor No More.

As Honor No More celebrated their hard fought win, the Bullet Club music hits. Jay White, Doc Gallows, Karl Anderson, and Chris Bey come out and it seems their beef with Honor No More continues another night….

Gia Miller is standing by with the NEW Impact World Heavyweight Champion, Josh Alexander. Alexander talked about his match and overall journey to become World Champ. He also said that he was ready for Moose tonight and D’AMores secret opponent at Under Siege.

In the ring we have a promo with the NEW AAA Reinga de Reinas Champion, Taya Valkyrie. Valkyrie said that the Reina de Reinas championship means the worlds to her and she sees this title as the ultimate prize in Women’s Wrestling. As Valkyrie put over the importance of the Championship to her, Deonna Purrazo attacked Valkyrie. Purrazo focused her attack on the arm of Valkyrie. As Purrazzo locked Valkyrie in an Armbar, Havok and Rosemary hit the ring for the save which mae Purrazzo run away.

Decay and Valyrie had their staredown and that is when current Impact Knockouts Champion Tasha Steelz and Savannah Evans make their way out to the ring.

The match kicked off wild as all four women have legit beef with each other. The referee had a hard time to control the match. Havok was in control of the match against both Steelz and Evans. The main plot of the match here was that Steelz did everything in her power to avoid getting in the ring with Rosemary. The match was short but sweet and the end saw Havok hitting a spear on Evans for the win. 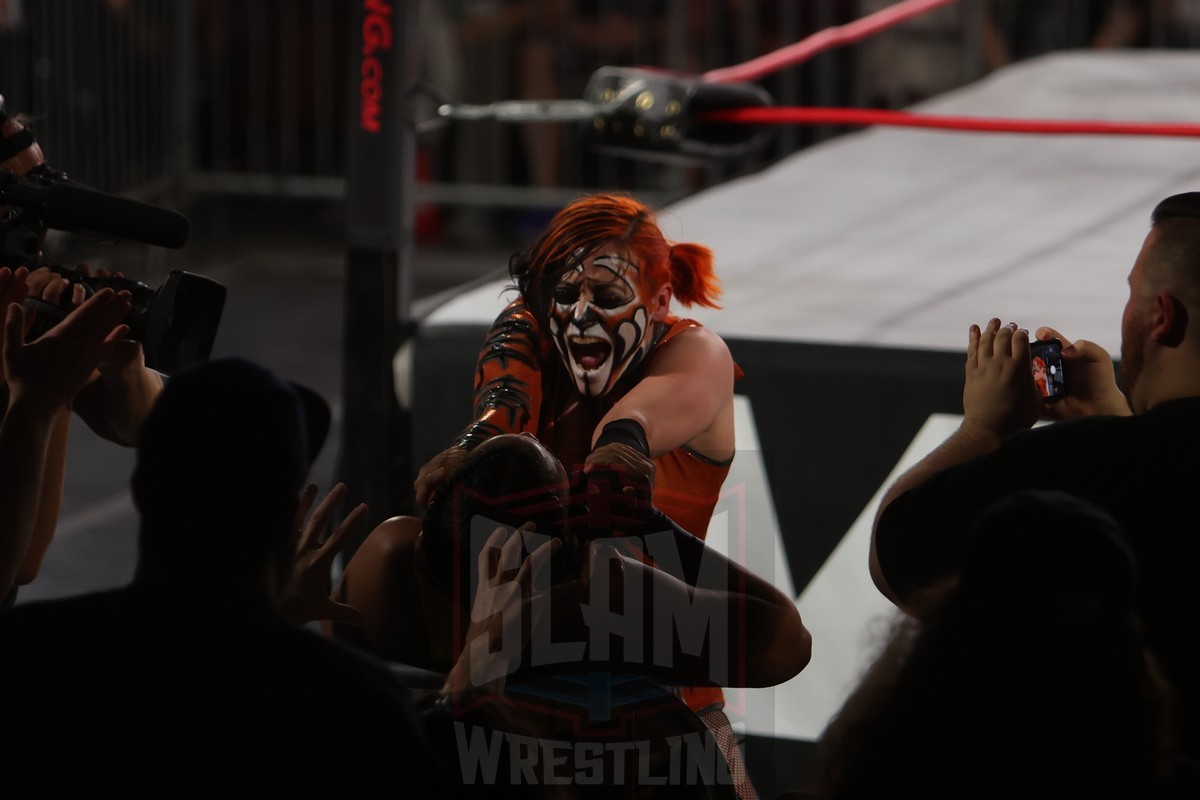 Rosemary goes after Savannah Evans at the Impact Wrestling TV taping, done on April 24, 2022, in Poughkeepsie, NY, and airing on April 28. Photo by George Tahinos, https://georgetahinos.smugmug.com

Impact Knockout Tag Team Champions, The Influence, Tenille Dashwood and Madison Rayne cut a promo where they once again drag the name of Kaleb. Gisele Shaw eventually came out and challenged Dashwood to a one-on-one match for next week.

Vincent cuts a promo against JONAH with PCO. There were heavy hints at a Monsters Ball as the PCO/JONAH feud continues.

Back at the Impact Zone, Hannifan does indeed confirm that the Monster’s Ball match as well as Ace Austin defending the X-Division Championship against Rocky Romero of NJPW will take place next week.

It is main event time and it happened to be a rematch from Rebellion. Moose took it early to Alexander to get the match started.  Moose was giving it his all against Alexander. 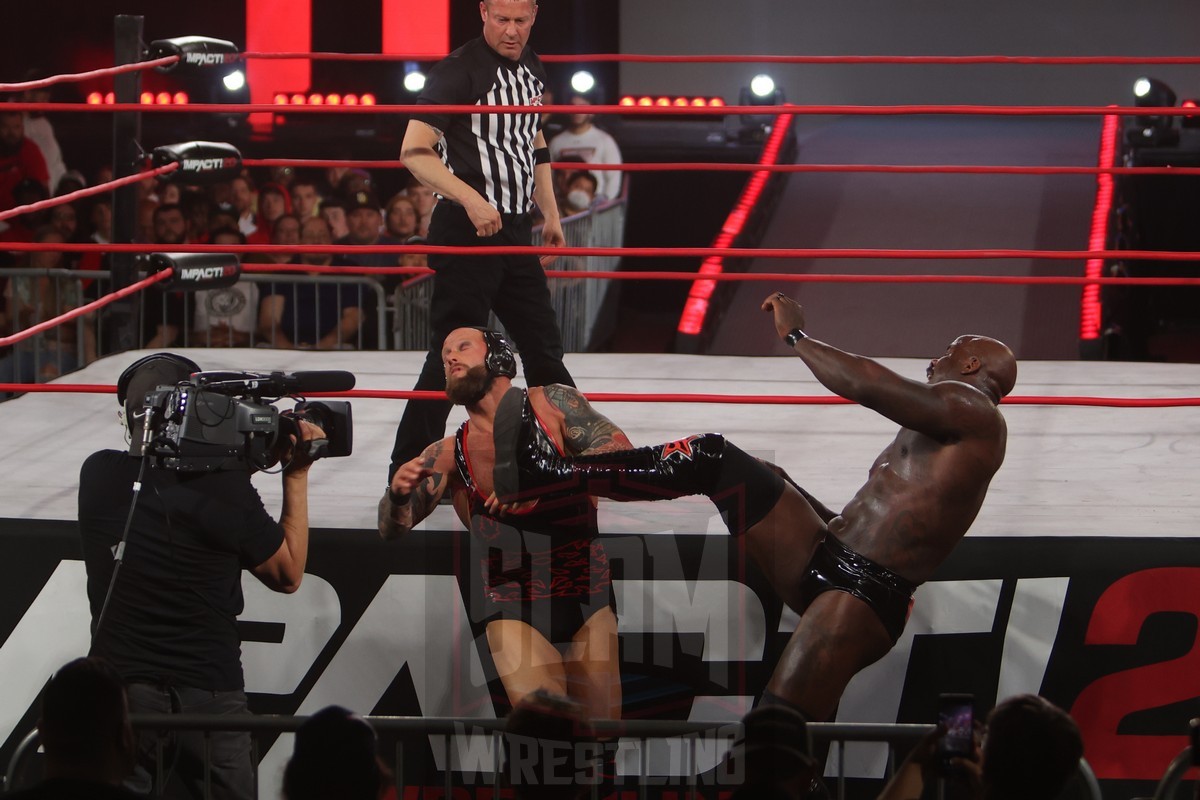 Moose took clear advantage of a tired Alexander days after their match of the year contender match from Rebellion. Moose choked Alexander with a boot, chopped him up and down the ring,a nd even did a Buckle Bomb on the ring apron (THE HARDEST PART OF THE RING).

Alexander was able to gain some momentum as he slapped Moose in the face but Moose quickly answered with a forearm smash. Moose then applied a rear chin lock. Alexander refused to stay down and started attacking Moose with palm strikes. Moose then got the advantage again after he kneed Alexander in the gut.

After Moose took complete control of the match, Alexander attempted a small comeback but had a C4 Spike blocked. Alexander took Moose down with a single leg takedown. This opened the door for Alexander to lock in a Sharpshooter on Moose. Moose made his way to the bottom rope to force a rope break.

Moose goes for The Uranage Slam, but Alexander counters with The Ankle Lock. Moose sends Alexander face first into the middle turnbuckle pad. Moose went for another BuckleBomb, but Alexander landed on his feet, kicked Moose in the gut and delivered a PowerBomb ob Moose. Alexander now has the power and finally connected with the C4 Spike for the eventual win to retain his Impact World Championship.

As Alexander was celebrating his second victory over Moose, Tomohiro Ishii was revealed to be the hand picked opponent from D’Amore. Ishii will challenge Alexander at Under Siege.

This was a fast paced show that set up 5 matches for the Imapct+ Special, Under Siege on May 7. It was very cool to see the Briscoes make their official debut for Impact. I am a bit shocked that they were thrown right into a championship program though.

The Moose/Aelxander match was fun and told a very different story from their match at Rebellion. Alexander had a great showing for his first title defense and a new challenger emerged as Ishii will get his shot at Under Siege.

Overall, this match had a lot happening as Under Siege is already next Saturday (May 7). Overall, this was a fine episode of Impact that set up a fun line up for next week’s shows.