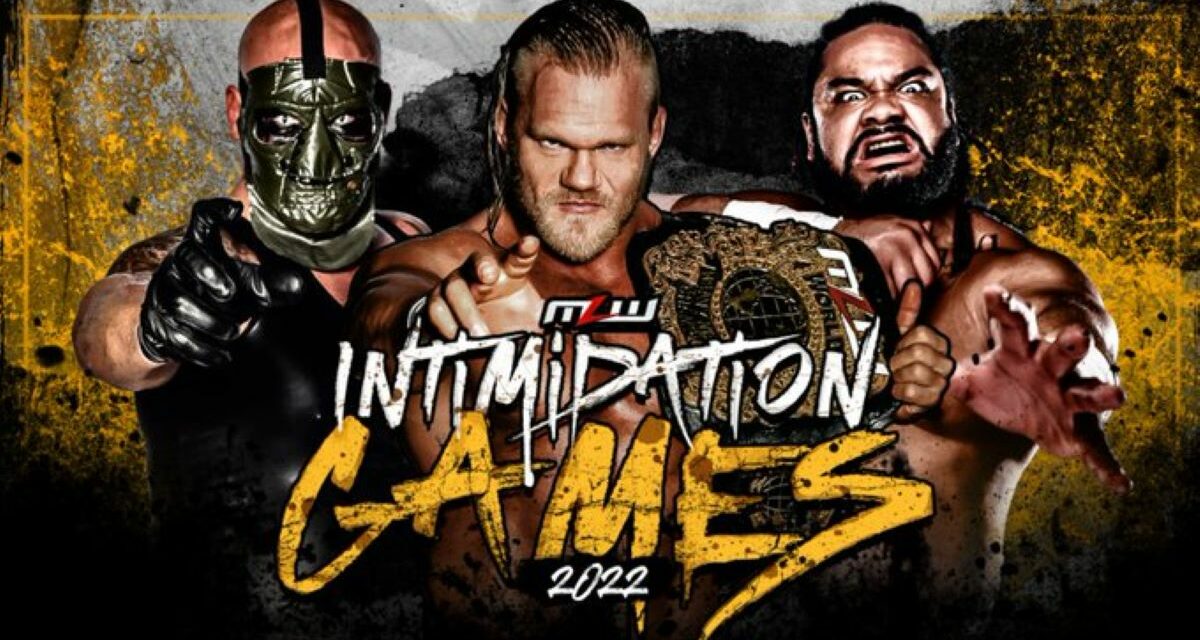 Hammerstone has been on a roll since becoming the Major League Wrestling Heavyweight champion against Jacob Fatu.  But now Mads Krugger is in the mix, and we get a three-way dance to see who will come out on top holding the top title in the company.

All this will take place later in the show as MLW goes to Gilley’s in Dallas, TX.  Rich Bocchini and Joe Dombrowski have the call as they introduce the crowd to tonight’s matches.  However, Alex Kane and Mr. Thomas come out to a chorus of boos.  Kane makes it clear he runs the show and The Bomaye Fight Club put the MLW Tag Team Champions, Calvin Tankman and EJ Nduka, on notice that they’re coming for the belts next.  Bomaye, indeed.

Bocchini throws it to Tim “The Candy” Bar to announce the First Match, and it is lucha libre action with…

Before the match, Mr. St. Laurent is out, and he sells it hard to the Dallas crowd for MicroMan.  Amazingly the fans are jazzed up for the Lilliputian luchador, but that’s where my interest in the match waned.

(Author’s Exhausted Rant:  Honestly, this feels to me like a retread of the luchadors battling each other, to the point it’s formulaic.  I never thought I’d say it, but I’m getting bored of these matches.  Maybe get the luchadores to fight for a title or two.  Just a thought)

The only thing of note in this match is that Medina is becoming more vicious when it comes to his hatred of Aramis, and that issue has yet to be resolved since El Intocable beat Aramis to a bloody pulp a few weeks ago.  In any case.  The Technicos were in control early on.  But soon as MicroMan tags in, he is a Mini in Peril, but he does get a few high spots into the delight of the crowd, and with the help of Aramis and Navarro the technicos get back in control.  The big (or little) moment of the match occurs when Arez and Medina have Aramis up top to deliver a double superplex and MicroMan gets behind both men by the ankles, and all four men crash to the mat in a major (or minor, depending on your point of view) Tower of pain.  The end has Medina twist Aramis’ mask to blind him, as El Intocable gets him planted to the mat and the Rudos rule the night.

After the match, Medina unmasks Aramis to add insult to injury, and you know this feud is far from over.

Dave Marquez(!) is backstage with the MLW Heavyweight champion, and Your Boy Hammer knows he’s in for a fight tonight.  It was one thing when he beat Fatu for the belt, but he points out tonight is on another level as he will defend against his two biggest rivals, but he’s ready to muscle through the competition.

We get plugs for MLW’s signature event, Kings of Colosseum, coming May 13th.  Some matches have already been announced, and there will be more to come in the weeks ahead.

Bocchini mentions next June will be the 20th anniversary of MLW, and we get a blast to the past with Los Maximos (remember them?)  Then the feed gets distorted, and Mads Krügger appears, and yadda yadda yadda he’ll get the MLW title.  Hail…Krügger.

Huh. Well, that was different.  The rest would be more riveting if he didn’t sound LIKE HE WAS TALKING THROUGH A DRIVE THRU MICROPHONE!

We get some 5150 promos, where Rivera and Hernandez are playing pool.  Dr. Julius smokes come in and he shows off his five-finger discount with the Von Erichs WCCW title they donated to the Northern Dallas Museum a few weeks back.  Things look to be ramping up for a feud between 5150 and the Von Erichs but, uh…where was Slice Boogie during this?  Kinda odd.

But it’s time for the tale of the tape…

Here's the tale of the tape for our triple threat Main Event as Champion @alexhammerstone defends his World Heavyweight title against @AtrocityMKK and @SAMOANWEREWOLF.#MLWIG pic.twitter.com/1OPUs3ZsqJ

Now let’s head to the Main Event, which is a Triple Threat for the…

Richard Holliday comes out and sits at commentary, much to the chagrin of Bocchini and Dombrowski.  Krugger and Fatu come out to strong boos and cheers, respectively.  But the streamers come for the champ, and Your Boy Hammer makes his way to commentary and starts to beat the ever-loving crap out of Holliday.  As The Sole Proprietor scurries off, Krügger comes to lay hands on the champ, and Fatu launches from the outside.  It’s game on from that point onward.

Back in the ring, Fatu and Krügger brawl back and forth but The Black Hand is dominant early on.  He then chokes Fatu using the Contra Unit flagpole (oh, feel the symbolism), but Hammerstone is back in the ring and he and Fatu joins forces to put the boots to Krügger to send him out.  From there we get dueling “Fatu/Hammer” chants from the Dallas crowd, and both men try to end the match early with their finishers, but each man has the other scouted.  Hammer gets an overhead belly-to-belly suplex, but Fatu nails a swinging uranage to cover for a two count.

Krügger gets back in the ring, and he chokes slams both combatants.  Hammerstone and Fatu roll to the outside and then Krugger launches over the top ropes to get the 7-10 split.  He gets Fatu in the ring and Krügger hits a chokeslam to cover for a two count.  Now Hammerstone comes in and slams Krügger to each corner, and then Irish whips The Black Hand to the corner and gets a scoop slam to the center of the ring.  Your Boy Hammer goes up top for a high-risk maneuver but is cut off and Krügger gets an avalanche fallaway slam to the champ.  All of a sudden, Fatu off-camera launches and nails a diving somersault senton to Krügger and he covers for a two count.  Hammerstone goes back up top the turnbuckle and gets a double leg dropkick to both men and gets Fatu on his shoulders to drop him in a TKO to a cover, but only gets a two count.

Your Boy Hammer signals for the end, but Fatu gets a pop-up Samoan Drop, then nails a chair shot to Krügger’s dome.  He gets a chair and props it in Hammerstone’s face in the corner, then Fatu goes to the opposite end with another steel chair.  He leaps, and we get a Van Samoan Terminator.

Fatu covers the champ, but Krügger takes a Baklei club to Fatu (huh.  Guess it’s a no holds barred match, too).  Krügger stalks Hammerstone with the club but gets a low blow to his…err, little Black Hands (ok, that sounded weird…even for me).  Your Boy Hammer tosses the club and hits a bicycle kick to the big man, and he goes outside and under the ring to get a large board.  He props it into the corner and attempts to send The Black Hand to the hardwood, but Krügger has too much power and he gives a backbreaker to the champ.  The ref tries to take control but is shoved aside by Krügger.  Hammerstone delivers with an overhead suplex to cover, but there’s no ref to make the count.  As he looks for the official, Holliday comes out to the ring and with The Power of Douchenozzlery™ nails the 2008 finisher to his former Dynasty partner.  Fatu capitalizes with a Moonsault to cover, but the ref is still out cold.    Fatu grabs the ref and shakes him to his senses and then goes back to cover.  The ref counts for one, two…oh, the champ kicks out.  The Black Hand is back on his feet and Fatu tackles Krügger into the board set up in the corner making it explode.

Fatu’s momentum sends him outside the ring, and then Hammerstone delivers the Nightmare Pendulum to Krügger, and he pins him down for the one, two, and three.

As Your Boy Hammer celebrates with the fans on his latest title defense, we go backstage, and Fatu is laid out on the concrete backstage.  The camera pans back and we see Bestia 666 with a steel chair in his hand, and Cesar Duran walks in the shot smiling at the handiwork as the show fades to black.

The main event was the best part of tonight’s show, and Hammerstone/Krügger/Fatu delivered the goods in the title fight.  I would prefer a one-onone matchup with Hammerstone and fatu down the road, but it was still great.  I am curious what else is in store for the Samoan Werewolf and what El Jefe plans down th line.

For now, see you in seven.