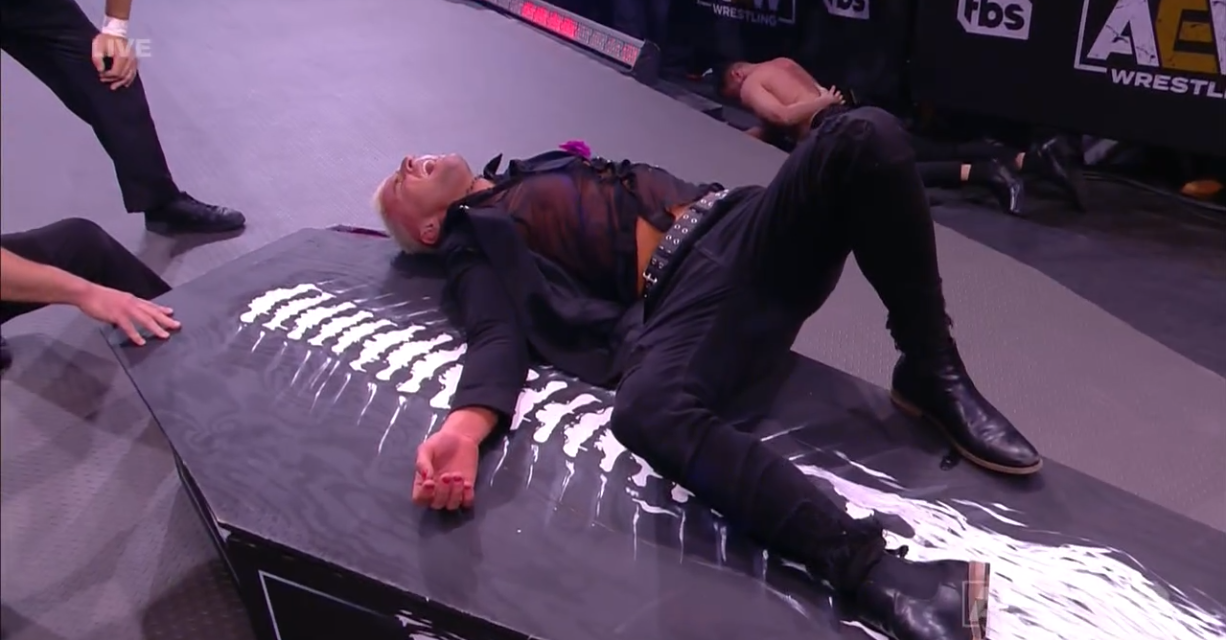 It’s Wednesday night and you now what that means! Tony Khan has another huge announcement! Yea, these announcements are starting to become a running joke. That’s a shame as it is overshadowing a pretty good card. Darby Alliin is going to take on Andrade in a coffin match, MJF is forcing Wardlow to take on the Butcher and Hook is making his Dynamite debut. Let’s get to the action.

Rhodes opens with a hip toss on Punk. The two take a minute to size each other up. Punk with a head lock takedown and locks in a bow and arrow stretch. Rhodes counters into a pin and Punk breaks the hold. Dustin tries to build momentum coming off the ropes, but Punk is able to knock him from the ring. Back in the ring, Punk starts to focus on the potentially injured knee of Rhodes. The Natural, fighting on instinct, shove Punk into the ring post on the apron. the two trade kicks to the calves in the middle of the ring. Rhodes takes down Punk with clothesline and then mounts him in the corner, reigning down right hands. Rhodes’ left knee gives out on the dismount, sending him crawling to the corner. Punk misses a knee strike and Dustin hits the Code Red, but he can’t get the three count. The Natural drops to a knee to deliver the uppercut. Punk counters Cross Rhodes with a kick and follows with a chop block. He locks in the figure four. Rhodes and Punk trade slaps while leg locked. Dustin rolls Punk over, reversing the hold. Punk grabs the ropes to break the hold. Rhodes knocks Punk out of mid-air with a strike to the midsection. He follows with Cross Rhodes and then a piledriver. Some how Punk kicks out. Dustin delivers straight punches, but Punk responds with a roundhouse kick. He looks for the GTS, but Rhodes drops down. Punk drops to his knees on Rhodes and gets a deep cover pin for the three count.

After the match, Punk and Rhodes embrace in the ring as a show of respect. As Punk makes his way up the ramp, he is confronted by AEW World Champion Hangman Adam Page. Punk looks the champ straight in the eyes before walking off.

Smart Mark Sterling intercepted Wardlow as he entered the building earlier today. Apparently, security will be escorted him everywhere…in handcuffs.

The BCC jump their opponents at the sounds of the bell. Martin, Moriarty and Anderson recover and settle in to the match. Hometown boy, Moriarty gets the hot tag. He lands a massive slap on Bryan, who responds in kind. Danielson escapes a stretch with a suplex. Dante Martn takes out Mox on the floor and then looks for the nosedive in the ring. Mox catches him and locks in the bulldog choke. Danielson keeps Moriarty at bay, while Wheeler handles Brock. Moxley with the Paradigm Shift to Martin and covers to get the pin.

The Cutler cam is live. ReDRagon and the Young Bucks know they have to turn things around. O’Reilly says he will start by beating Jungle Boy tonight. Adam Cole tries to fire up the Undisputed Elite while issuing a ten man tag team challenge next week.

Tony Schiavone welcomes Tony Khan to the stage to make a major announcement. TK cuts to the chase; bringing out the president of New Japan Pro Wrestling, Takami Ohbari. Adam Cole cuts in on the video screens to steal the thunder. AEW is partnering with NJPW for a joint show in Chicago on June 26th, Forbidden Door. Switchblade Jay White walks out on stage and says this is about the Undisputed Elite and the Bullet Club. [More on the announcement here.]

Jade Cargill makes sure her “Baddies” will be in the crowd for her match with Marina Shafir.

The Butcher vs. Wardlow

Before the match, MJF runs down the Pittsburgh crowd from his suite. He orders Wardlow to come to the ring without music. He’s still in handcuffs; I’m surprised Justin Roberts is even allowed to give him an introduction. The two men charge each other and collide, neither man budges. Butcher bites Wardlow on the forehead and head butts him into the corner. Wardlow with shoulder blocks, sending Butcher to the floor. Chair fly into the ring, courtesy of Butcher, but the ref tosses them out. Wardlow is whipped between the ring apron and ring side barricades. Butcher gets slammed into the ring post. Wardlow is slammed onto the apron. In the ring Butcher hits a powerbomb, but Wardlow kicks out of the pin at one. The orchestra warms up and Wardlow conducts a Symphony of Powerbombs in four acts. Wardlow covers Butcher to get the three count.

After the bell, Wardlow accepts getting handcuffed and led out of the building.

Eddie Kingston tells Daniel Garcia that it will only be the two of them in the arena on Friday and he will be sending a message to the JAS.

The two start off with some good old fashioned mat wrestling. KO nearly locks in the cross arm breaker, but JB is able to get to the ropes.  After sliding under O’Reilly, Jungle Boy connects with a drop kick. Kyle hits a running knee strike and follows with butterfly suplexes. Jungle Boy batters KO with strikes, but gets kicked in the back of the knee. A missed running knee strike sends Kyle to the floor. JB with the suicide dive through the second rope. A comeback lariat puts KO on the floor.

Back in the ring, Jungle Boy hits a DDT and hold on for a choke hold. O’Reilly powers out. KO charges, but JB counters with a belly to back suplex into the turnbuckle. O’Reilly with an eye gouge, but JB runs back into the fight, pummeling Kyle in a tree of woe. A sliding drop kick cuts down O’Reilly and JB wants the snare trap. KO fights out and applies an ankle lock. JB locks in the snare trap, but Kyle makes it to the ropes. O’Reilly with a superplex followed by a brain buster. Kyle goes up top and drops the knee. He covers and gets the three count.

MJF is in no mood for an interview after the Butcher couldn’t get the job done. Max has more money to throw at the problem. MJF calls himself a snake and all it takes in one bite. He welcomes in Jake Roberts with a fat envelope of cash. Roberts says he will get the job done. Lance Archer doesn’t care about the money; he just wants to fight.

Hook has the best hair in the business, hands down. Even Danhausen coming out to curse him can’t stop Hook. He quickly locks in Redrum and Henry taps.

After the bell, a frustrated Danhausen jumps into the ring. Danhausen can’t curse Hook, so now he wants to fight him. He pokes Hook in the chest and immediately knows he messed up. Hook just leaves the ring.

Frankie Kazarian starts to challenge Sammy Guevara when Scorpio Sky interrupts. Sky needs a favor; he needs Frankie to wait so he can challenge Sammy. He tells Kazarian that he will get the first shot on the belt. Frankie gives him his blessing to go after Guevara first.

Sammy Guevara and Tay Conti are in the ring as Sammy captured the TNT Championship for the third time. The two kiss as Sammy lavishes superlatives on the crowd, who boo him. He addresses the boos and tells them to be mad. Scorpio Sky walks out on stage, telling Guevara to screw off. Ethan Page delivers another impassioned promo before handing the mic off to Dan Lambert. He dresses down Sammy for acting like a high schooler. Lambert demands a rematch for Sky or he’s sending them down to the ring. Sammy will give Sky a rematch in return for a mixed tag team match with Page VanZant.

The House of Black is owed a debt and they will kill the sun. Feugo del Sol might be in trouble.

Pittsburgh Steelers Najee Harris and Pat Friermuth escort Baker to the ring. Seeing that this is her hometown and this isn’t that other promotion, Baker ain’t losing this match. Baker hits a sling blade and follows with a stomp. She puts on a Steelers glove and applies the lockjaw. Kamela taps out.

After the match, Baker calls out the women’s division for being a disaster after she lost the title. She also calls out Jade Cargill for calling Pittsburgh ugly. Baker claims she will win the Owen Hart tournament.

Next week in Philadelphia Serena Deeb will end Hikaru Shida in a street fight.

The Blade jumps to the apron and Allin takes a swing at him with a skateboard. Private Party then jumps Allin in the ring and the number over take him. Andrade puts the boots to him and goes to open the coffin. Darby catches Andrade on the floor, only to get slammed into the ring post. The fight spills into the crowd, where Sting is waiting. He fights the Blade and Marq Quen, tossing Quen off a railing. Sting then splashes Quen, Blade and Andrade from the crowd onto the arena floor.

After the commercial break, we finally get back to the the match. Allin plants Andrade in the middle of the ring and goes up top. Andrade catches the Coffin Drop and answers with a German suplex on the floor. Allin is tossed into the coffin, where the lid is studded with thumbtacks. Allin uses his arm to prevent the lid being closed. Andrade with a suplex on the ramp and sets up another one onto the stage. Allin is suplexed onto a steel grate next to the stage. Andrade drags Darby back to ringside, slamming him into the ring steps. Andrade tries to tear the lid off the coffin to no avail. He carries Allin onto the ring apron. Darby fights out and knocks Andrade to the floor. A suicide dive sends both men into the coffin. Darby slams the lid onto Andrade but can’t get it closed. Jose runs down to save Andrade and gets slammed on the thumbtacks. Allin slams the lid down again and this time leaps onto it. The coffin is closed and the ref calls for the bell.

After the match, Sting joins Allin to celebrate. The Hardy Boys walk out on stage to join in the celebration. See you in seven!

AEW Dynamite just continues to churn out entertaining shows filled with good wrestling. Was tonight’s MAJOR ANNOUNCEMENT seem underwhelming if you aren’t a fan of international wrestling, specifically New Japan, sure, but it didn’t eat up much time. CM Punk and Dustin Rhodes opened with a solid match. The Wardlow/MJF story might be the best thing going right now in wrestling. And the main event delivered, even though Sting was heavily featured despite not actually being in the match.