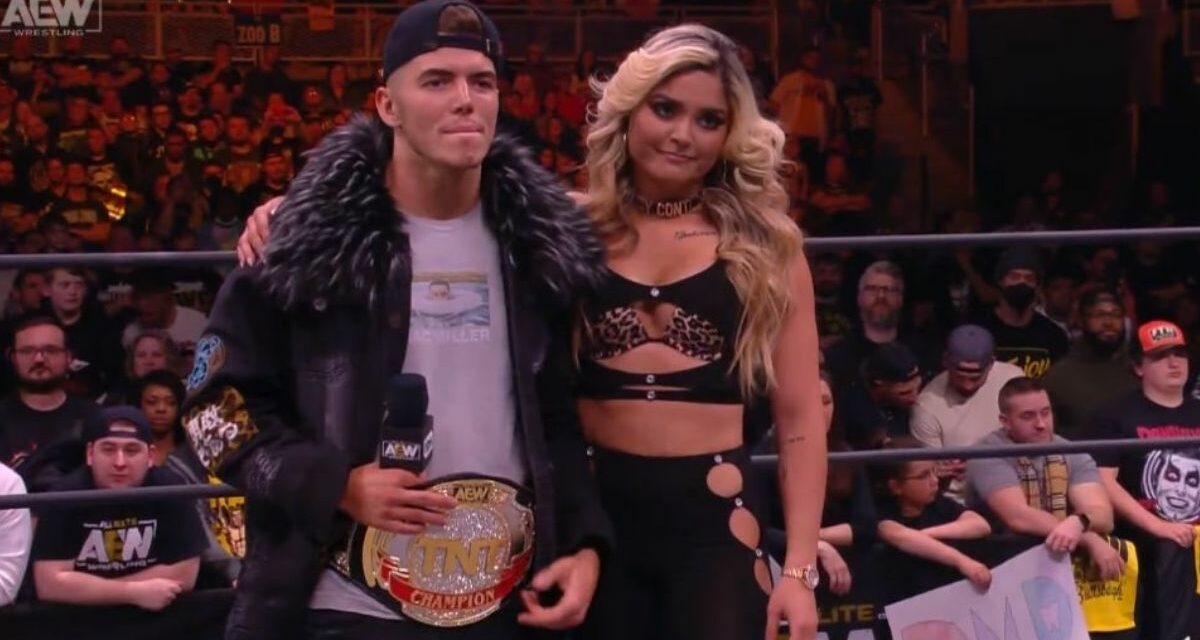 PITTSBURGH – Before Wednesday night’s Rampage from the Peterson Event Center in Pittsburgh Wednesday night, Virgil walked amongst the crowd. He was spotted near the line in which Sammy Guevara and real-life gal pal Tay Conti were happily taking pictures with fans who dropped off supplies for babies. Virgil was frail in his black hoodie, and he didn’t hustle fans for photos. After announcing last week that he has had health issues, the Million Dollar Man’s right-hand man was simply enjoying the night. 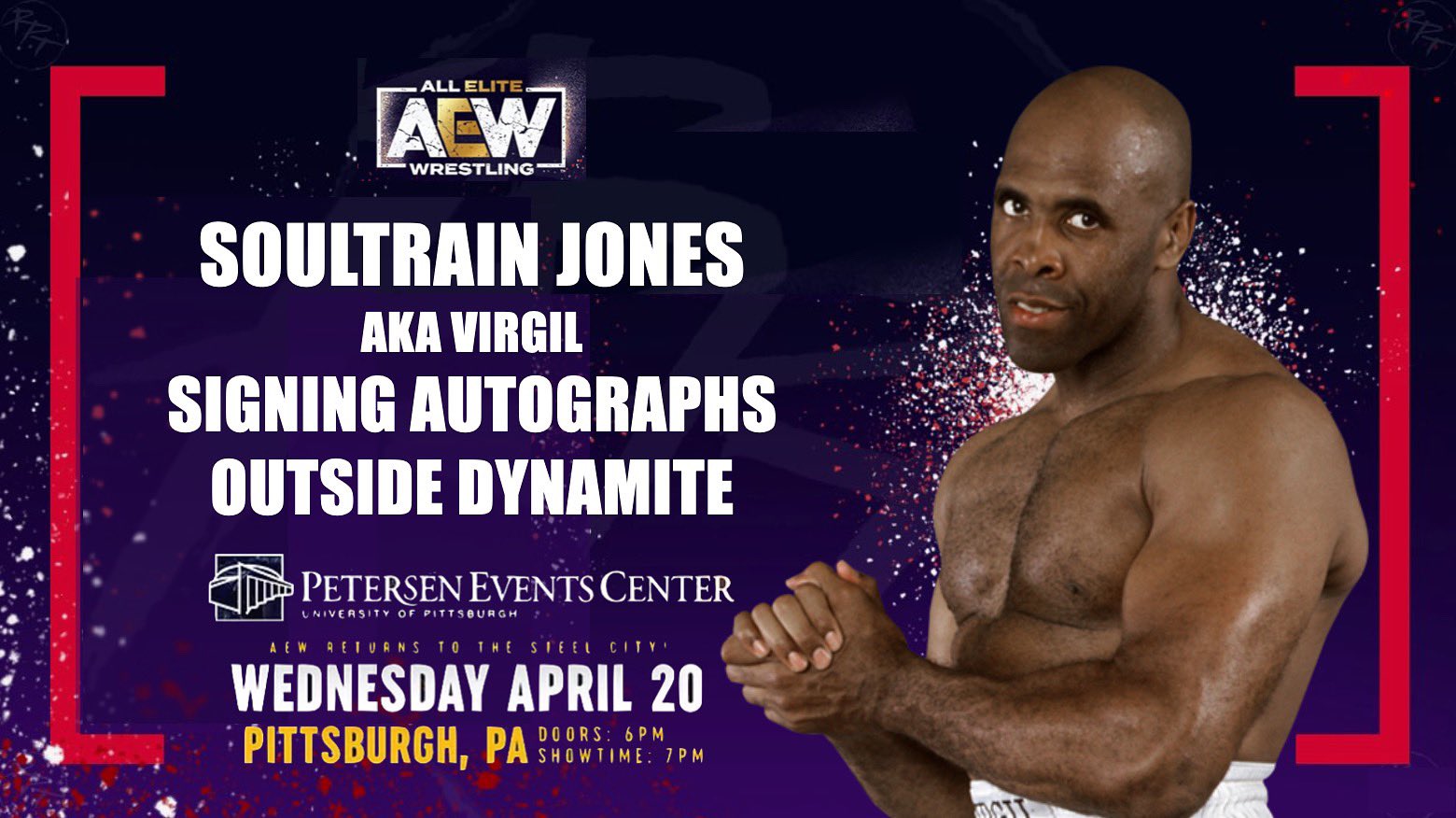 Early arrivals were able to see a six-man match with the Dark Order (where’s Colt Cabana been?) versus the Chaos Project and it was enjoyable for AEW Dark. The crowd, decked in AEW shirts in colors other than black, cheered for Evil Uno. The last time AEW was in Pittsburgh, August 13 of last year, Evil Uno made a public appearance at a nearby hobby store, and about a month ago he was in an independent show outside of the city. The fans have grown to like the lug, and they love Negative One, who along with other AEW stars, stopped by a charity yesterday to drop off more baby supplies and take photos with fans.

Kris Statlander, introduced by Justin Roberts as being from “Long Island, New York” has ditched the loveable, nose-poking scamp gimmick for a long-striding, dressed-in-black brute. She took on Julia Hart — still sporting the eye patch — in a quick match. The fans were solidly behind Statlander, but she appeared almost robotic. She strode to the back with not so much as a wave… and no “boop.”

At 7:10 p.m., referee Aubrey Edwards was introduced by Justin Roberts to arguably the biggest pop of the early evening. She danced a little gig for gusto.

Tony Nese is out with manager “Smart” Mark Sterling. The two take umbrage with Nese’s opponent, the “Steel City Brawler.” Confession time: I’ve been involved in the Pittsburgh independent wrestling scene in Pittsburgh and I don’t know who the “Steel City Brawler” was. I inquired with friends in the industry and no one had an answer. Bald with tattoos, black and gold attire, and a non-athletic build, the fans were behind this “yinzer.” Sterling played into the easy heat and the fans ate it like a Primanti Sandwich.

Minoru Suzuki topped Aubrey Edwards in the “Pop” department as he entered to take on QT Marshall. Marshall played perfectly off of the 53-year-old Japanese legend and the Pittsburgh fans fully behind Suzuki.

In the next contest, fans cheered on “Johnny Hungy” John Silver of the Dark Order.

Justin Roberts mingled with the crowd a lot more this time than in past visits. He pointed out someone’s birthday and two-year wedding anniversary during down times. It made for a more intimate experience.

Roberts introduced Excalibur, Tony Schiavone, and Jim Ross. The Hall of Famer, Ross, whose late wife, Jan, was from Pittsburgh, always receives a thunderous ovation. Roberts lets the fans know that CM Punk is coming out and they should be ready to chant his name. When the time comes, the roof is raised for the “Best in the World.” An appreciative and knowledgeable crowd, Pittsburgh heaps on the positive applause for opponent Dustin Rhodes. Punk and Rhodes shake hands to much aplomb. At several points they chant, ” Let’s Go Dustin/CM Punk!” The fans were really into the contest, as two fan-favorites with decades of experience tore the place apart in the opening segment.

A post-match stare down between Punk and AEW World Champion “Hangman” Adam Page seemed to confuse the crowd.

The Blackpool Combat Club does a smart thing by attacking their opponents before introductions could be made. Dante Martin and Brock Anderson (with Arn Anderson) are popular, but their partner Lee Moriarity would receive an ovation equal to Bryan Danielson. Here they crush that possibility. Moriarity gets a good bit of offense in, especially against Danielson, and that’s important. When Danielson first approached Jon Moxley about their “guiding” young talent, he mentioned Moriarity by name. Expect Lee to get a look from Steven Regal.

After that there’s a backstage segment with Adam Cole, Kyle O’Reilly, Bobby Fish and the Young Bucks that we in the audience cannot hear.

AEW Owner Tony Khan comes out to a big ovation. He announces the partnership with New Japan Pro Wrestling. Some observers expected that as the “Major Announcement.” The announcement went over well with the crowd that is familiar with that brand. [More on the announcement here.]

Wardlow, who wrestled in the independent circuit of western Pennsylvania, received great support from a backstage segment where he was ultimately handcuffed, and the match against The Butcher. MJF got expected heat from the storyline.

The Owen Hart Foundation Tournament match between Kyle O’Reilly and Jungle Boy had onlookers not sure who “should” win.

A backstage segment with MJF and Jake “The Snake” Roberts went over well with the crowd.

Hook made his Dynamite debut and Anthony Henry was announced as his opponent. A “Hook is Gonna Kill You” chant rang through the arena. When Danhausen materialized, the fans were into it. And they loved it even more Danhausen challenged Hook “to a fight.”

The oddest and most hysterical moment of the evening came when Sammy Guevara and Tay Conti came to the ring to cut a promo. Scorpio Sky, Ethan Page and Dan Lambert answered. In a shocking display, the fans booed Guevara and Conti ruthlessly and cheered Sky, Page and even Lambert with incredible zest. Tonight, a double-turn took place.

Thank you @steelers for the Pittsburgh hospitality!

…and thanks for the glove 😉@AEW pic.twitter.com/Ozjpzm0N7i

When Britt Baker came out to wrestle Danielle Kamela in the Owen Hart Foundation Tournament, fans went crazy. A few years ago, Baker came to the ring with Steelers mascot Steely McBeam. Here, she was accompanied by two Pittsburgh Steelers, star running back Najee Harris and tight end Pat Freiermuth. In August, Baker, who can do no wrong in her hometown, wrestled then-babyface Red Velvet. Wednesday, Kamela was the heel.

Baker took the microphone after the match and didn’t once mention Thunder Rosa, and has turned her attention to the Owen Hart Foundation Tournament and even mentioned Jade Cargill, who had unkind things to say about Pittsburgh. Of course, Dr. Britt Baker, DMD, who the day prior was one of the wrestlers who helped with donations of baby formula and diapers for Lt. Governor John Fetterman’s wife Giselle’s (she was in attendance) charity, was the Teflon star of the evening.