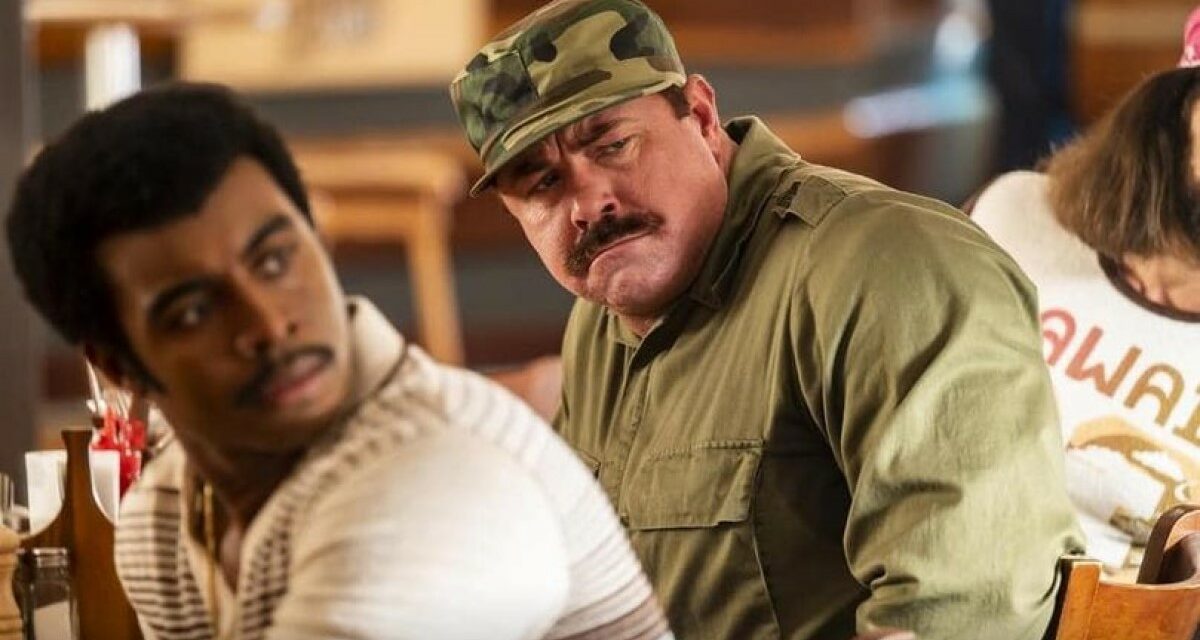 Wayne Mattei was hopeful of pulling off a pair of comebacks in 2022 — one to return as Sgt. Slaughter in NBC’s Young Rock‘s second season, continuing to chronicle the mostly-real life story of Dwayne Johnson, and the other for a return to the ring as his retired wrestling persona “The Maniac.” In an interview to follow up on last year’s SlamWrestling.net feature story, the big Aussie recounts how he not only succeeded in securing both, but how the stars aligned for him to bring both ventures together.

Mattei retired from the ring after a March 2018 match against Scott Steiner for All Action Wrestling in Perth, Australia. The timing was right as Mattei was finding some inroads into acting and, after a career of wrestling and working as a security detail, he was open to some less physically grinding work. As wrestling fans know full well, however, in-ring retirements are like comic-book deaths: they usually don’t mean that someone is gone for good.

Before we get to return of The Maniac, though, Mattei backs up to when he was awaiting the news of a second season for Young Rock, which was not guaranteed, and whether Slaughter would even play a part if it happened. “I wasn’t sure how the story was going to go with the characters that they already had, especially the guys from the ’80s,” he begins. “My agent came back to me and she said, ‘They want you for season two.’ The best part about the way that the writers have done the show is that Dwayne can go back and forward to any time that he wants whatsoever. So that means that characters can be brought up again at any stage which is great, especially for us as actors.”

The first order of business upon receiving word that he would be returning at Slaughter, just as it was on the first go-around, was for Mattei to whittle his beard down to The Sarge’s signature moustache. “I’d grown the beard back; I’m quite amazing at growing facial hair — just not on the top of my head unfortunately,” he admits with a laugh. “I didn’t mind sporting ‘The Sarge’ moustache. Once we finished (season one) I actually shaved it off, and it was a shame that I did because it was only like a week or two after that I had received a present in the mail from Sarge. He sent me a proper marine campaign cover and he put his own chin strap on it for me, as well as his own marine pin on the front of the hat. I was blown away to receive that. I did take a photo with it on, with the aviator shades and all that, but it just didn’t have the same feel because I didn’t have the moustache.” 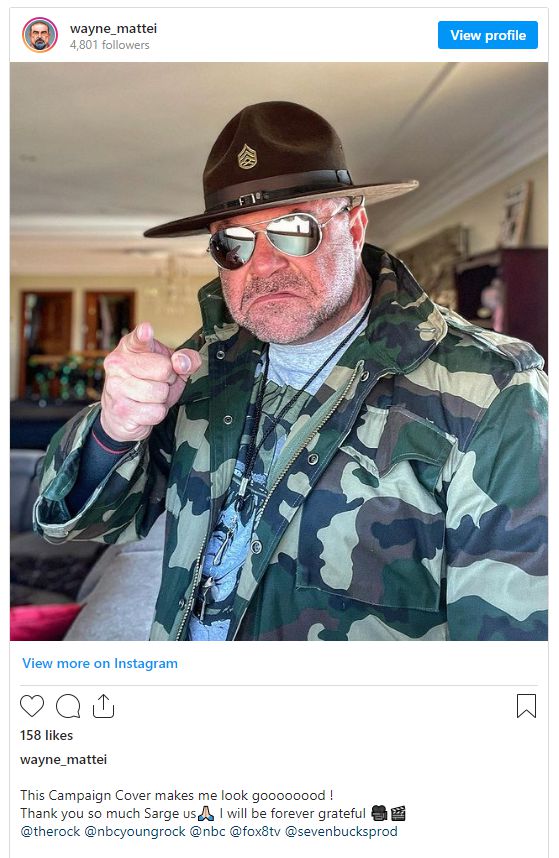 Putting aside the semi-serious trials and tribulations of facial hair, Mattei was most excited about the prospect of returning to a role and building on his performance, which was a new experience for him in his acting career. “This was my first time doing a recurring role,” he explains. “It’s really exciting to be able to bring that character back, and know that I initially did the character the right way from getting praise from Sarge himself and his daughter (Kelly), to (Young Rock executive producer) Brian Gewirtz. When we were on set, Brian came up to me and he goes, ‘You just nailed it, absolutely nailed it.’ In season one, I had one episode where I was able to show them what I could do. With this year, I’ve got three episodes with more dialogue, more screen time, so it’s built my confidence up massively.”

Mattei has also found support from fans of Sgt. Slaughter (Bob Remus), creating a pathway for him to join in Slaughter’s extended fan network. “I’ve connected with ‘Sgt. Slaughter’s Slaughter House,’ a fan club that run by a young man in Australia by the name of Xazyl Phoenix,” he acknowledges. “They promote and push me because they love the Sarge character the way I created. I’ve got people from the U.S. that message me on Instagram to say we love the way that you played him, so it’s a big honour to be able to play such an icon from the ’80s and get the praise that you did it really well.”

When it came to filming the in-ring work in season one, Mattei was one of the only actors on set with wrestling experience, and the rest were trained by Chavo Guerrero for the action scenes (Guerrero returned for the same role in season two as well). In seeing the crew come back together again, Mattei could see that they’ve held on to what they learned the first time around. “They picked it up like it was just yesterday,” Mattei enthuses. “You know, some of the guys actually came along really well and could probably, if they wanted to, venture out into the indies and give it a shot. (John Tui and Fasitua Amosa) depict their characters perfectly (Afa and Sika, respectively) but the two boys have no fear. They’ll do anything, and just do it as hard as they can. The lad that played Ricky Steamboat (Ivan So) was great, and we got to have a little bit of a match at one stage which was really cool. Brett (Azar as The Iron Sheik), Kevin (Makely as Randy Savage), Matt (Willig as Andre the Giant), they’ve just picked up on everything; it was good to see them take the lead on a few things, and it made it very easy for Chavo to do his job.” 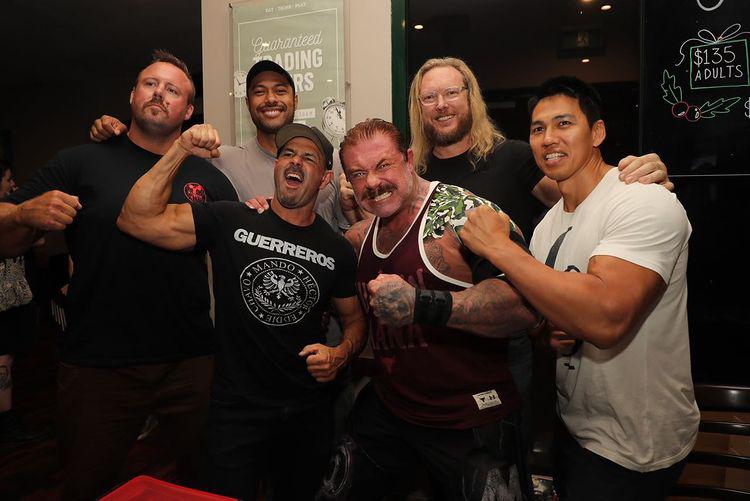 With Mattei in “wrestling retirement” during the first season, he was able to pass on some tricks to his fellow actors, but it was all just stories about his wrestling days. During the second season, Mattei was able to bring Young Rock and “The Maniac” together for one show, and he got a little help from his Hollywood friends to boot. “We did a show up in Queensland during the filming of Young Rock, and I did a small run-in with one of my big tag team partners called Giant Kyote, who’s like seven foot tall,” Mattei says to set the scene. “We come in and just annihilated some of the heels, and then we called Chavo from the back to come in and finish them off, which was really good. We had almost all the cast in the crowd, and then at the end Chavo called them into the ring from the show. And we all got to say thank you to the crowd, and really promoted Young Rock as well which made it really nice.”

It’s safe to say, in truth, that Young Rock was foremost on Mattei’s mind as he took careful steps not to overdo it in the ring. “I got in a couple big chokeslams, but I didn’t go too hard because I knew we were still filming,” he offers. “At my age (Mattei is nearing 50),  I had to make sure it was pretty easy in between shooting because production would kill me (if I got hurt).  I didn’t have quite The Maniac character that I would normally have, with a bald head and the two-tone, black and white goatee. But I had my contacts in, coming out with my skeleton mask on, and the crowd knew who I was because I’ve wrestled in Queensland quite a bit. It was really good to get back in there and still know that people remembered me from from what I did before.” 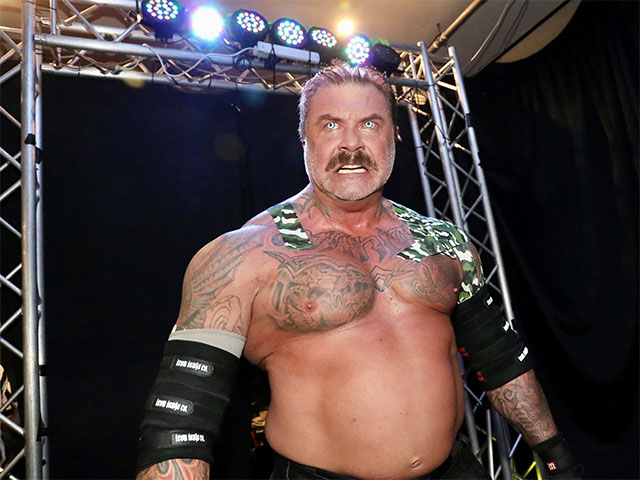 Wayne Mattei looking decidedly not Slaughter-esque (except for the moustache) in his return to the ring. Photo courtesy of Wayne Mattei

Moving on “from what he did before” and giving his commitment to acting is looking like a great decision for Mattei, as he talks about new opportunities emerging after gaining notoriety as Slaughter. “I’ve had a lot of interest come after season one from a lot of different different things,” he says with obvious excitement in his voice. “I’ve recently done an audition for the new Mad Max movie called Furiosa (set to feature Anya Taylor-Joy and Chris Hemsworth in 2024), so I’m keeping my fingers crossed that it will go well. I was asked to audition for a reality TV show here in Australia, so we’re waiting to see how that pans out.”

He’s also waiting on word from a potential Sgt. Slaughter side project, much like how Slaughter played his own character in the world of G.I. Joe in the 1980s, and the opportunity led from an episode of a Sgt. Slaughter’s Slaughterhouse podcast. “They had a gentleman on from Valaverse, which is a toy company that creates the toys of Action Force and had incorporated Sgt. Slaughter,” he explains. “They had mentioned on the podcast that they were looking to do an Action Force movie at the end of the year, and everyone that was on the podcast, even Sarge, said that if you need somebody to play Sarge in the movie you need to contact Wayne from Young Rock. So, I’ll stay positive with it and see what happens.”

Speaking of positivity, Mattei explains how he had to latch onto his happy place while shooting a certain scene for this season. “When we were shooting this year, I had to face one of my greatest fears,” he admits. “Now I can’t divulge what that is but I’ll tell you it took every ounce of my being to be able to shoot the two scenes. That’s probably all I can say, but I was absolutely petrified. I was really, really glad that I faced that fear, and I think it emanates on screen perfectly.”

While Mattei won’t give any more details about the scene, one might wonder if it could have anything to do with another new wrestling character introduced in this second season — someone who often brought the biggest and baddest men to their knees in fear of the pet he took to the ring with him. Tied up in a brown sack. And it rhymed with his first name.

While you unwrap that easy riddle, Mattei wraps up with his hopes for the future, which would feature a return for Slaughter in season three … but not the Sarge everyone knew and loved from the ’80s. “I hope that if they do bring Sarge back in the third season, that they bring him in as the heel when he was the (Iraqi) sympathizer,” Mattei admits. “The man had some serious heat then, and some of the stories he’s told me about when he was in that heel character are just crazy. You know, we’d have The Sheik there (in Brett Azar), and the only person we’d need to find is (General Adnan). It would be amazing to try and portray the heel character of Sarge.”

Leave it to the wrestler on the cast to have hopes for sinking his teeth into the villainous role. In the meantime, check out Mattei as the heroic Sgt. Slaughter in Young Rock on Tuesdays, 8pm EST on NBC and CityTV in Canada. Stay tuned to SlamWrestling too for reviews of the episodes and more feature interviews with the cast and crew!