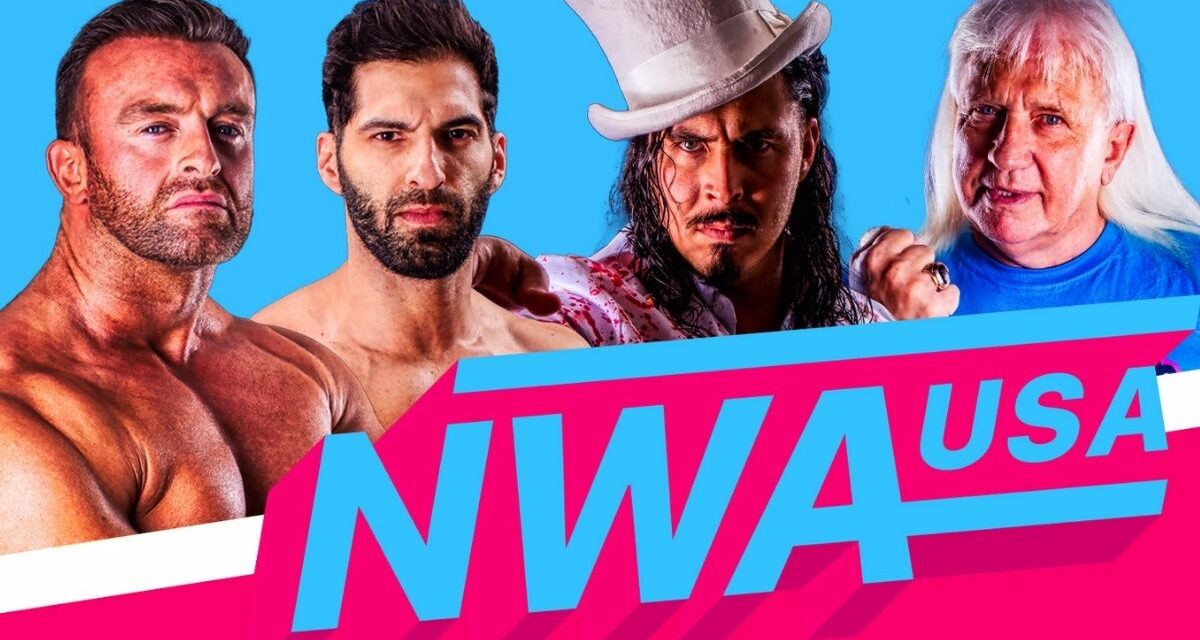 The NWA USA weekly YouTube show has some technical difficulties at YouTube … which led to much grousing in the chat room there about how it was working fine on Fite.TV, for those with the yearly pass. Eventually, the show was re-uploaded to YouTube, and it started off with the Fixers talking with May Valentine.

She starts with Jay Bradley, who tells Wrecking Ball Legursky to “stop breathing so loud, I’m trying to talk to a pretty lady.” Legursky was a little less coherent, and a lot more yell-y. (Legursky is a lot more coherent in an upcoming interview on this website.)

Joe Galli — who recently announced he quit his day job at a TV station in San Antonio — and Velvet Sky have the call.

They give a little background on Jackson’s legit amateur background, but this is mostly about “Magic” Jake Dumas, who has turned more vicious than “Fable” Jake had been. A one-armed stalled vertical suplex by Dumas was pretty cool. Dumas distracts the ref by going for his magic hat, and instead has a cord that he chokes Jackson with — and then makes disappear. In the end, Jackson leaps off the top rope, was caught, and the Abra-Cadaver finisher ends it all. Post-match, Kyle Davis and Dumas meet up and Dumas plays a card trick on him … and then slices Jackson with the card. Yikes. (Incidentally, we just interviewed Magic Jake here.)

Mike Bennett does a 60-second promo, talking about how he didn’t fit the sports entertainment mold, and that he is indeed a pro wrestling. It’s a new Mike Bennett.

Kyle Davis had Ricky and Kerry Morton at the podium. Davis notes that Kerry has been “on a tear in the NWA.” Kerry talks about past matches in the NWA World Junior Heavyweight title tournament and wanting to get even with Colby Corino. Corino comes out, “why should I give you a match, Kerry. I already beat you once,” he tells Kerry. The fans chant “cheater” and Colby shows off his wedding ring. Ricky pushes Colby, and Corino quips that Ricky is “30 years too late for this fight.”

A replay aired of Ariya Daivari at the podium calling out Nick Aldis from last week, which included a reference to his brother Shawn Daivari (now a WWE producer), which naturally leads to …

Just before the main event, Galli and Velvet Sky are joined by William Patrick Corgan to call the match.

Corgan uses the 10-cent word, animus, to describe Daivari’s dislike of Aldis. Aldis offers Daivari a free shot, and Daivari goes for the headlock; on the second attempt, same thing, Aldis pushes him off. On the third offering, Daivari gives him a kick. It’s almost a squash including how the commentary team alleges that Daivari was “out of his depth,” as Corgan said.

Daivari finally turns the tide, pushing Aldis face-first into the ring post outside the ring. When Aldis gets back in the ring, he’s not at his best, and Daivari wraps his legs around the two different ring posts.

It eventually balances out until Daivari rakes the eye. A chopblock brings down Aldis, flopping his sweat at the crowd. Aldis continues to sell the leg issues, but gets a Michinoku Driver out of nowhere — but is too hurt to cover.

Really, so many wrestlers could take a lesson on his selling of his leg; even when he went to do a move, he’d sell it. Kudos to Daivari for continuing to believably working on the leg.

Daivari gets Aldis down, hits the Magic Carpet Ride, but somehow Alids kicks out.

Aldis does a soft Tombstone Piledriver — his knee buckled — and then goes up to for some reason. Daivari pounces and superplexes his foe, but again, not enough.

Daivari kicks Aldis where the sun doesn’t shine, goes for the Magic Carpet Ride, but misses. Aldis throws the carpet in Daivari’s face, and locks on his finisher, as Daivari taps out. The crowd chants, “Real World champ” as the show ends.

I’m curious to see where it’s going with “Magic” Jake … but the main rating is for the clinic that Aldis put on as far as selling throughout a match, making his opponent look strong and smart even in a loss.