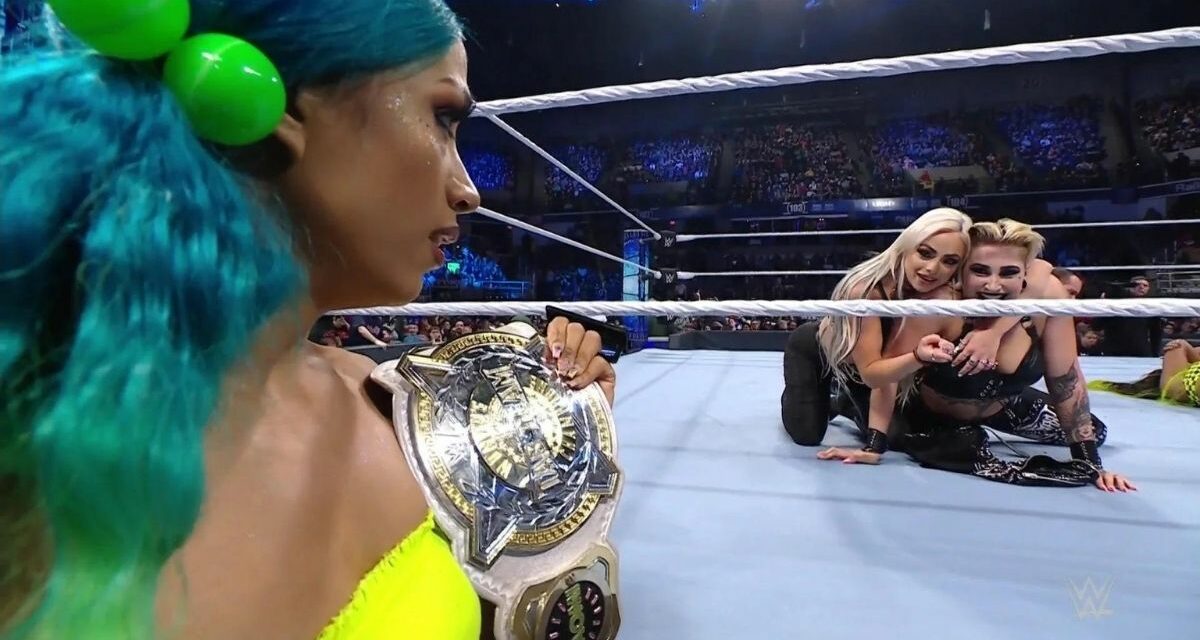 Riddle still isn’t wearing shoes, and I hate it. He is excited to be back on SmackDown with his “best friend” Randy Orton. The reason why these two Raw wrestlers are here is because the Usos showed up on their show earlier this week uninvited. But who needs an invitation when you’re champions and The One?

The Bloodline arrive to confront RK-Bro. Randy calls the Usos Roman’s b*tches as he reminds the twins about his 20-plus year career in the WWE. In short, the Raw champs accept the unification challenge.

Am I the only one who thinks the twins were out of breath? It’s funny and kind of distracting hearing Jey panting into the microphone. Meanwhile, Riddle really wants to fight Jimmy due his sneak attack last week on Raw, so he gets his match against one of the twins later tonight.

Ripley pushes Naomi into the turnbuckles and flips her onto the top. Naomi does a handstand by latching her legs onto Ripley’s shoulders and throws her outside the ring. As soon as Rhea gets back into the ring, Naomi attempts to smash her head against the turnbuckles only for Ripley to push her backwards onto her ass.

The Nightmare Ripley prepares to jump from the the top rope and gets kicked in the jaw by Naomi. A thud echoes through the stadium.

Ripley does a cross body from the top rope onto Naomi’s chest to put her out but fails to pin her.

Naomi has used two maneuvers that Rhea hasn’t seen before that almost knocked her out.

Rhea gets the win. After that, she makes one of the most frightening grimaces to Sasha Banks I’ve ever seen since Bray Wyatt.

Kayla Braxton stops the twin champions, the Usos, for a recap of what happened earlier with Randy and Riddle only for the boys to brush her off and enter Roman Reigns’ dressing room leaving even me in disarray.

SmackDown welcomes Madcap Moss, the Andre the Giant Battle Royal winner, as a solo wrestler without Nappy Corbin. He fights Humberto tonight, one half of the Los Lotharios duo.

During an interview backstage, Madcap plays around with the Kiss Cam by pulling a ‘Betty Boop’ with his ass lined up with the animated heart. Never again, please.

Humberto pounds Moss’ head in the corner of the ring. Madcap fights back by slamming into Humberto’s torso.

Moss goes back and forth between the ropes and shoulder tackles Humberto to the mat. While Humberto is on the turnbuckles, Moss rushes to suplex him, but Humberto moves out of the way in time having Angel take the hit. Madcap tries again and scores.

Madcap grabs Humberto from the neck and performs his Punch Line for the win.

Charlotte Flair is mad about the ‘I Quit’ match with Ronda Rousey and in the process Drew Gulak manages to get an interview with the champ about Flair’s decline of the challenge. She claims that she said no to protect Ronda’s “fragile ego” after her lost at WrestleMania.

The crowd chants: “You tapped out!”

Gulak says that if the official wasn’t knocked out, Ronda would be standing here as champion.

Flair places Drew into the Figure Eight because she is the submission queen. She doesn’t let go until four referees show up trying to stop the pettiness that is Charlotte Flair. Once done, she orders one of the officials to pick up her title as she basks in the  gold.

Flair will defend her title against Rousey at WrestleMania Backlash.

Sami fled his last match with Drew. It was embarrassing to watch.

McIntyre pummels Zayn into the barricades and the apron, throwing him around like a small child.

Zayn leaves the fight again to prevent the execution of the Claymore Country and flees into the crowd. Drew follows but isn’t able to catch Zayn.

Due to him being a wet blanket, Zayn has been placed in a Lumberjack match against McIntyre next week.

Ricochet calls Jinder Mahal a “tree trunk” during an interview backstage. I laughed a bit too much at that.

Ricochet does a cross body from the top rope onto Jinder. He attempts to jump from the ropes again but Shanky pulls him out of the way. So, our Intercontinental champ lands on both Jinder and Shanky outside the ring.

He brings Jinder back into the ring and hits 630° senton for the win.

Ridge Holland, Butch and Sheamus are interviewed backstage after Butch’s lost to Xavier Woods last week. Butch was left to run rampant in search of Woods. He found him with Kofi at a t-shirt stand. They rumble as the officials try to stop them.

Lacey Evans has another talk about her traumatizing past with her abusive father and how the impact both broke her as a child but also strengthened her resilience as the person she is today. Natalya gives an unsavoury opinion about how they’ve all had tough lives not just Adams. I don’t think she needed to say that though…

Riddle goes after Jimmy with multiple kicks causing him to exit the ring. Jimmy throws Riddle into the turnbuckles so hard that I thought Riddle broke his spine as you hear a loud thud. Riddle jumps from the top rope and gets a knee to back from Jimmy Uso.

Randy tries to distract Jimmy until Jey comes in leaving Orton open as Jimmy slides to the edge of the ring to kick him. Jey gets into an altercation with Orton resulting in Jey landing back-first onto the announce table.

That catches Jimmy’s attention long enough for Riddle to move out of the way once the twin jumps from the rope.

Jimmy throws Riddle into the air but Riddle grabs the Uso twin’s neck for an ‘RKO’ move out of nowhere for the win. I personally think Riddle did a great job tonight. I still don’t like the fact that his barefooted. Feet in someone’s face. Hell no!

In a few weeks, the Usos and RK-Bro battle to unify the Tag Team Championships at WrestleMania Backlash.

We are in for another nail-biting, chair-gripping match.

TOP PHOTO: Sasha Banks, one of the Smackdown Women’s Tag Team Champions, looks on at Liv Morgan and Rhea Ripley in the ring.