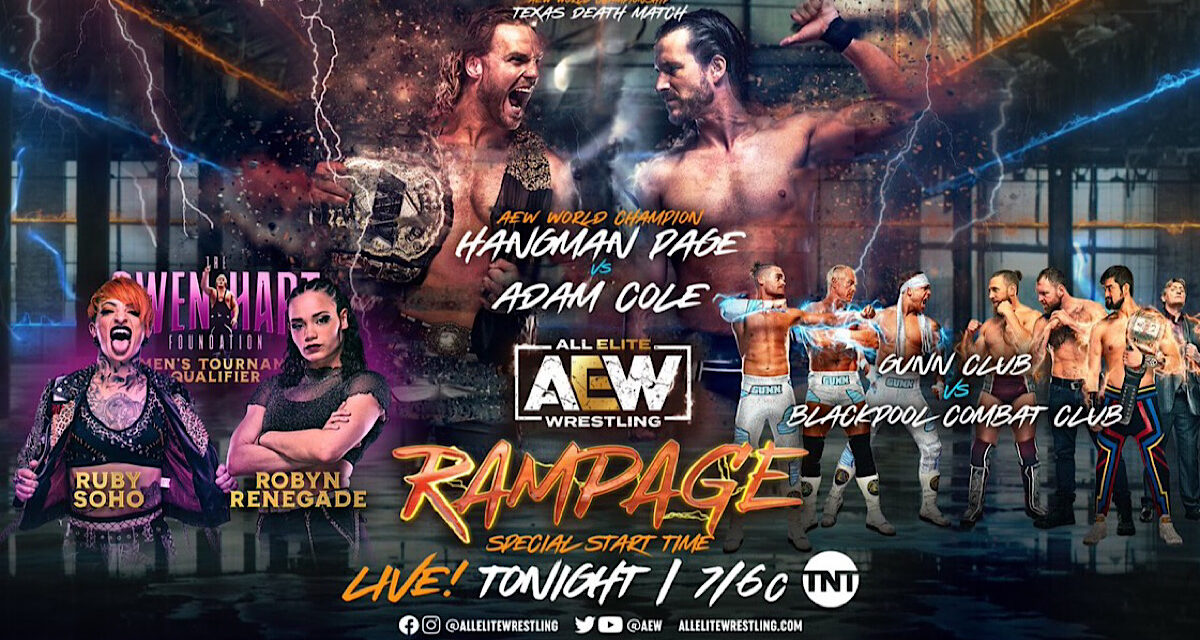 [rumbletalk-chat hash=”insert here your chat hash”]It’s Friday Night, and you know what that means? Well, yes, it’s Tax Day un the United Stes, but that doesn’t require a visit from Irwin R. Schyster. It’s time for All Elite Wrestling, and tonight has AEW champion Adam Page defending the belt against Adam Cole in a Texas Death Match. Can Page Cowboy up against Adam Cole Bay Bay?

We’ll find out tonight, as we come to you from The Curtis Culwell Center in Dallas, TX. Excalibur, Taz, and Ricky Starks have the call. But now, we need to head to the ring for your First Match of the night between… 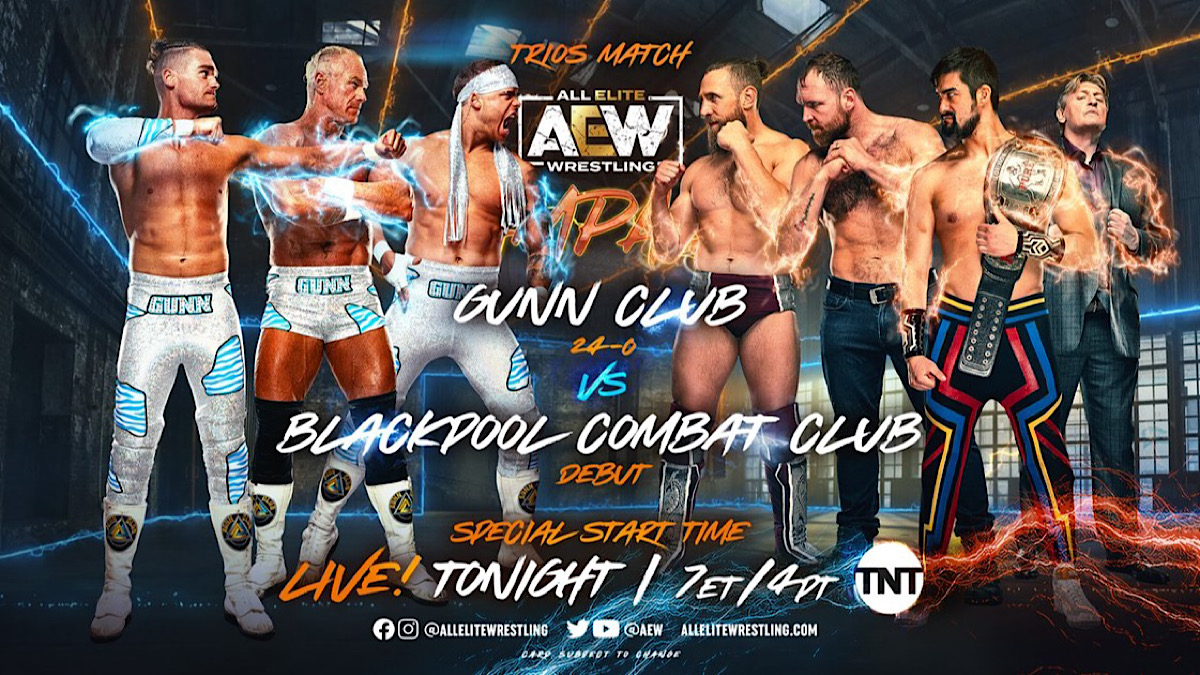 There is huge chants for Yuta after his bloodbath last week, as he starts out and outwrestles the Gunn Club early on. He tags I. Danielson, and the American Dragon stretches the competition until Billy gets in the ring to overpower and change the tempo. During Picture in Picture, the Gunn Club keeps Danielson isolated from wading in thr Blackpool,, making him a Dragon in Peril. But Danielson trips Austin Gunn into the to middle turnbuckle. A hot tag to Moxley, and he’s a Wild Thing en Fuego, getting both Gunn Club members in the double DDT. He’s tags in Yuta with a crossbody, but it’s broken up by Billy Gunn. The match breaks down with the Blackpool Comabt and the Gunn Club members, until, big daddy Billy is in the ring with Yuta. Billy gets Yuta with the One and Only cobra clutch slam , but Yuta breaks out at two. He tries the Fameasser, but Yuta rolls Gunn up with a bridge to get the win.

Your Winner via Pinfall: the Blackpool Combat Club

The Butcher vs. Some Jobber

Yeah, I don’t recap squash matches, so enjoy this Haiku:

“Butcher comes to
Powerbomb poor jobber and
Every Time I Die”

Your Winner via Pinfall:  The Butcher

leave for the match, stay for the music, folks.

Dustin Rhodes is backstage to speak his mind, and I’ll let him cut the promo:

“Guys, it seems like ‘The Natural’ Dustin Rhodes has been on this one Last Ride for quite some time now. Lance Archer; II took you out of the top five. I proved to the world that I still got it after five decades in the business, and that didn’t sit well with you, and I know that this war isn’t over. But tonight, I have something very special that means so much to me in my heart [and] I am reaching out to you fans to listen for just a second. I’m making a challenge to a man who, without a doubt, is one of the greatest professional wrestlers on the planet. Someone who was a dream match of mine. We’ve got ‘bucket list’ written all over this.

Uhhh…yes, please. To all of that.

But let’s get to the womens action for the… 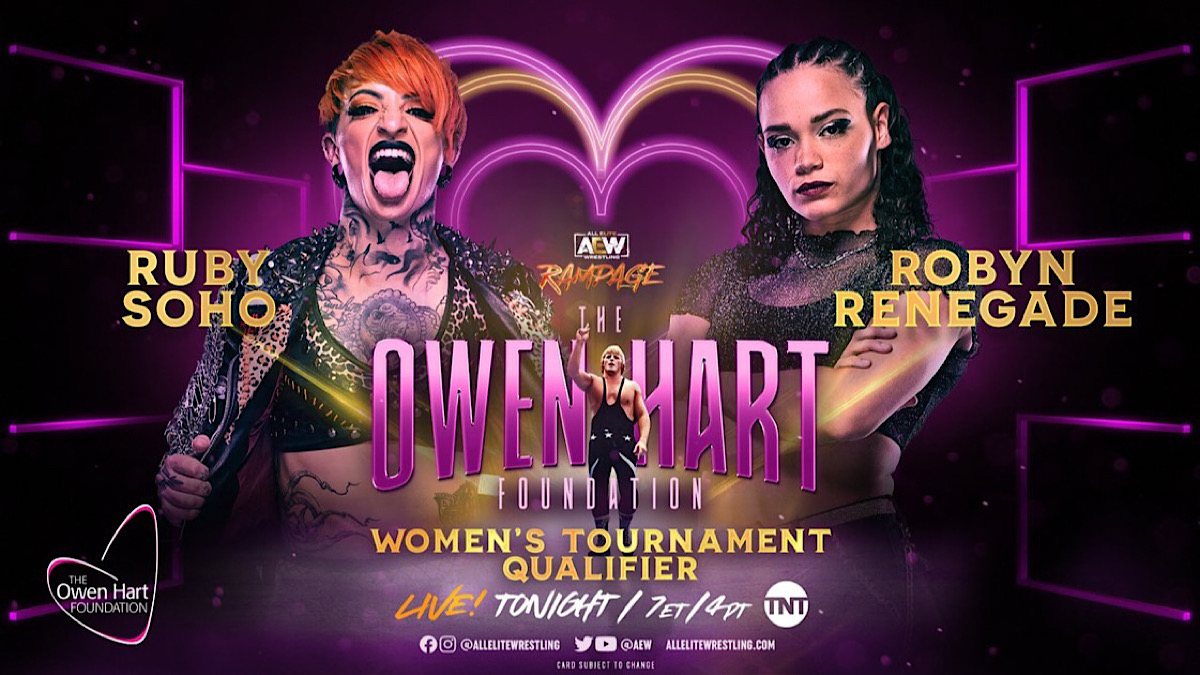 Excalibur makes mention of the work done and implores fans to go to owenhartfoundation.org

Soho is in control early on in the match, but as she balances her head on the top corner turnbuckle, Renegade kicks her in the head. During Picture in Picture, Renegadeis just manhandling…err, womanhandling Soho. She tries to get back in control but Renegade keeps her grounded all until…

Ads ( Again, what is the bloody point of Pucture in Picture if you’re gonna end up doing this exact thing I loathe? Why go to a break when the action is starting to get good? Is it the bots, Tony Khan? If so, just tell me, and I have a man that can bomb them to the Stone Age)

We come back, and Soho is now back in control and Renegade is on roller skates, acording to Excalibur, and she connects with double knees to on Renegade to the middle turnbuckle. Soho goes after her, but the ref breaks it up to give her opponent space. She goes underneath the ring, and…waitasec, she has a twin? What in the name of Total Bellas is going on?! Well, we get twin magic here, as “Charlotte” Renegade is in the match, and Soho goes up top for a senton, but she catches Charlotte’s knees. She gets Soho in a fireman’s carry, but Soho gets out and nails her with double knees. Charlotte ducks underneath the ring, and Robyn gets back in but Soho gets the Downwars Spiral ( or…let’s call it the Soho Abigail) for the win

Your Winner via Pinfall, and Advancing in the Owen Hart Cup Qualifier: Ruby Soho

There are plugs for next week’s show, including Tony Khan with a special announcement. If it’s about the bots, I’m out.

Mark Henry is with the combatants asking their final word befor they get it on in the ring. Page says Cole is a thorn in his side and a pain in the ass, and tonight he will take him out in a Texas Death Match. Cole on the rebuttal says he’s better than the champ, and he will put him away to gain the gold. 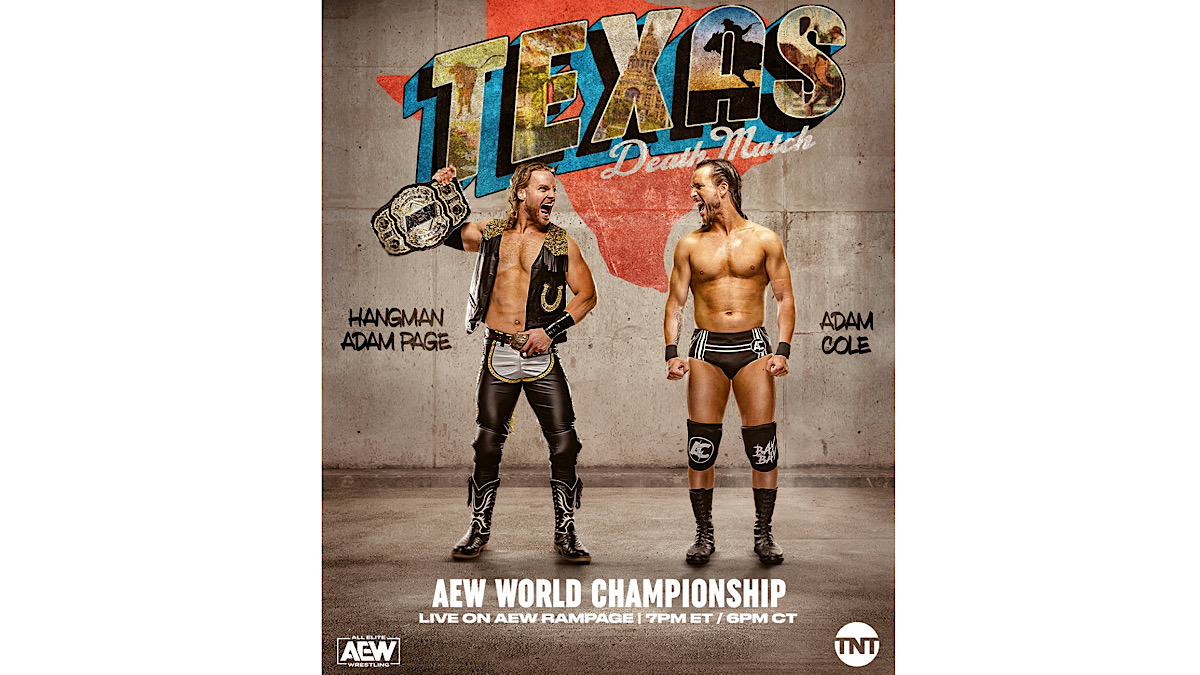 Cole enters with his tee shirt and dark pants, and Page has his boots, and chaps on, and proceeds to throw chairs in anticipation of the match.

As the bell rings, both men pick up chairs, and Page connects outside and Cole and page come to blows, and champ throws Cole to steel steps, as fans are loving this “Cowboy S***.” The match goes into the crowd at the Center, and Cole is running like a scalded dog away from Page. Back in the ring, Page goes up top with a steel chair and a deliver a steel Moonsault to Cole. He then props up a chair between the ropes in the corner, and Cole rams right into it, and he’s got color as he goes outside the ring. Page continues to brawl in Picture in Picture, as the champ sets up a table on the outside , but Cole turns the tide and gets Page in the ring with a chair and hits The Boom.

Now Cole gets a chain from the outside, ties it to the ring rope, and proceed to stalk the champ. Page fires back, but Cole clotheslines him with the chain. He sets up two chairs end to end and goes to get Page on the chairs, but the champ reverses to a DVD and Cole’s spine lands right on the points of both chairs, painfully.

Now more chairs come into the ring, but Cole tries his signature Panama Sunrise, but Page counters the move with the Deadeye, but can’t capitalize. Both men are hurting, and the ref starts the ten count. Page goes outside wih a Moonsault, but Cole gets a superkick to his middle for the first “Holy S***” chant. He sets up Page on the chairs, and Cole nails the Panama Sunrise but can’t cover. He goes up top, but Page cuts him off at the pass and counters to an exploder avalanche suplex to the chairs.
Then, Page sets Cole up on the chairs, and he sets down on a chair opposite him for a slap fight. Both men stand up, but Cole gets a superkick. He grabs Page’s head and says that he is a joke, but the champ manages to get him with the Buckshot Lariat. He ties up Cole on the rope with a belt, and he now goes for a barbed wire chair, and then…he unties him and Cole low blows him. He follows with a basement superkick, but Cole blocks. Page rips off and gets a barb wire on his arm, but he and Cole fight to ring apron. Page drapes the barb wire on Cole’s head and a delivers a Deadeye to the table on the outside to cover for the one, two, and three.

Your Winner via Pinfall, and Still AEW Champion: Adam Page

The Hangman stands tall, as the show fades to black.

Page and Coke had a great main event.  I honestly would’ve been happy with a title change, but his works as well.  As for the rest, everything was serviceable.  As for Yuta being billed as a top star, I like the direction.

For now, see you tomorrow for the Battle of the Belts!