AEW Battle of the Belts 2: Sammy gets his TNT hat-trick 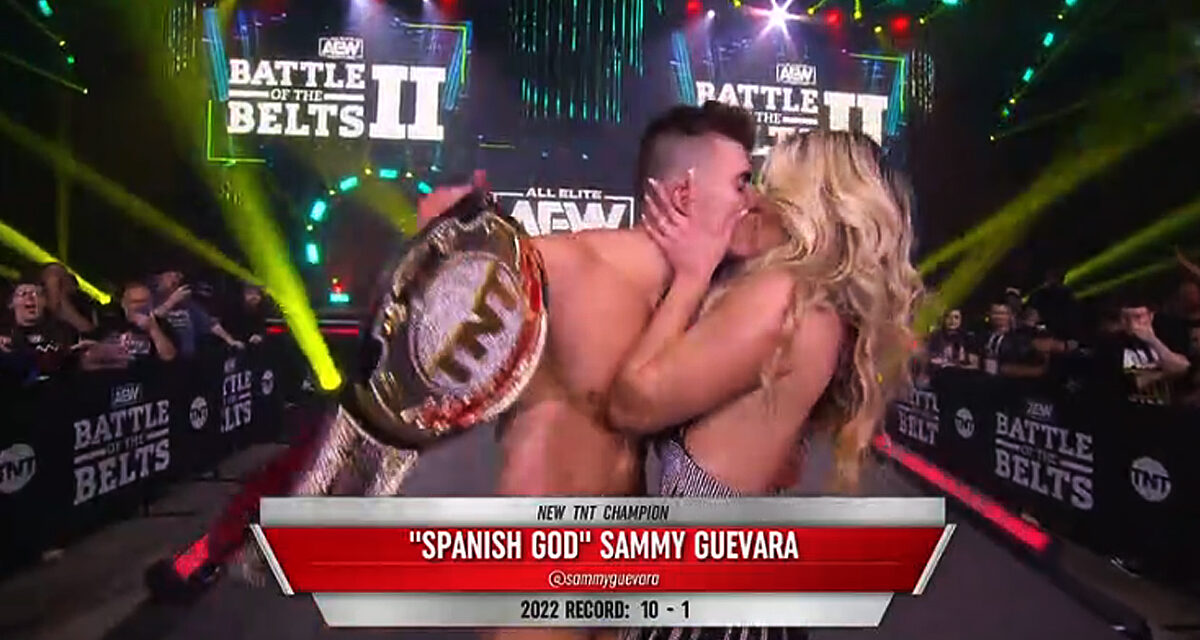 Sammy Guevara is the AEW TNT Champion for the third time but not without a bit of controversy. Guevara defeated one of AEW’s best grapplers, Scorpio Sky, via some underhanded shenanigans on AEW’s special Battle of the Belts 2 broadcast.

Guevara reverses things landing his own strikes…and yes…a bite to the head. Geesh.

The crowd sounds divided. We get…Let’s go Sammy! Sammy sucks! chants. Perhaps his onscreen slobbering with Tay Conti is getting on people’s nerves? I don’t know.

Guevara dodges Sky’s TKO. On the floor, Guevara takes time to have a friendly conversation with Dan Lambert before locking up with Sky. He throws Sky into the steel barricade. Sky returns the favour by dropping Guevara throat-first on the same barricade. Remember when that move used to stun a wrestler? Yeah, me too.

Sky slams Guevara on the floor. Conti looks concerned. Guevara counters being thrown into the steel steps by moonsaulting off them. Sky hits back with a TKO on the apron. Conti looks even more concerned. Sky brutalizes Guevara with rapid fire strikes in a corner. Three or four backbreakers in a row has Guevara in agony.

We see several of the same signs in the audience that we saw on Dynamite and Rampage. That kind of kills the “live” assertion by the announcers but on we go.

Ethan Page storms out to lend his buddy some moral support. Tay Conti confronts him at ringside. They have a nice chat until Guevara surprises Page and Sky with a shooting star press. Lambert is back on the apron after Sky suffers an awkward cutter. Conti counters Page’s interference by slapping his hands off the ropes.

This brings out a furious Paige VanZant. She and Conti brawl on and roll around on the floor.

Sky pokes Guevara’s eyes. Guevara low-blows him with the official’s back turned. The fan boo this loudly. Guevara  nails the GTH to pin Sky.

Not sure from what but Page is bleeding pretty badly in the ring as Guevara and Conti swallow each other’s tongues on the rampway.

Battle of the Belts 2 Results 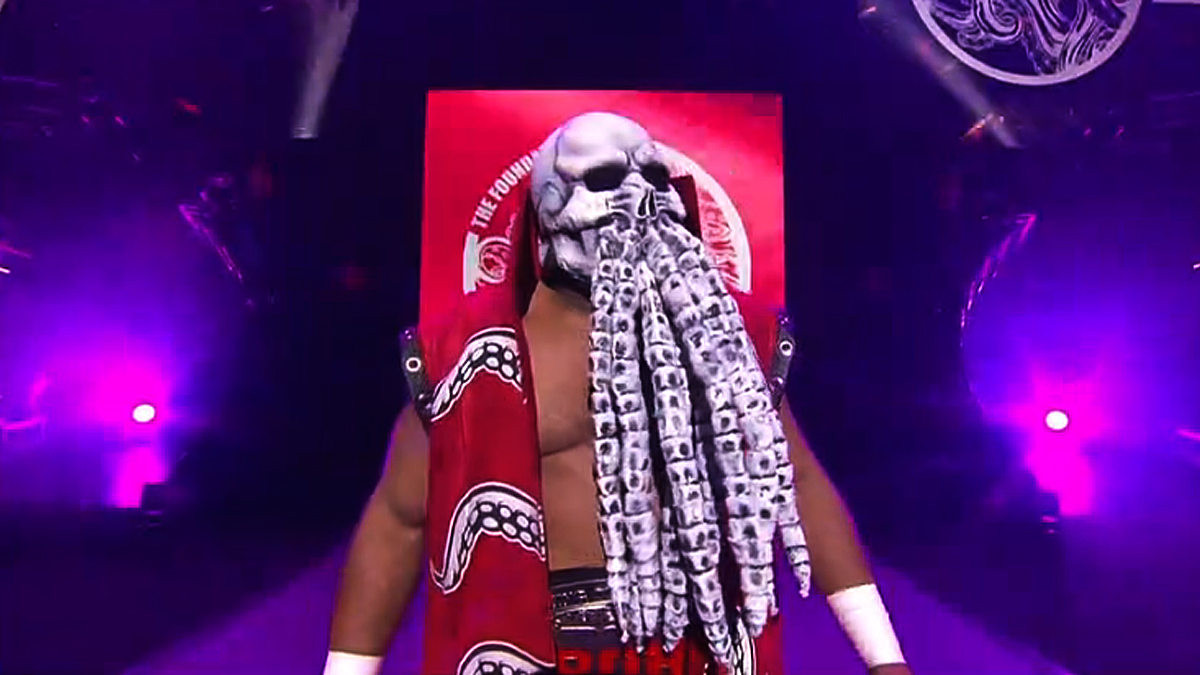 Can I just say it is awesome to see Dalton Castle back on television. He has some kind of back brace on though so I am wondering if his back still giving him issues? Castle is accompanied by The Boys, just two of them this time. Gresham comes to the ring announced as still part of The Foundation and wearing his Cthulhu mask, which is intimidating as hell. The Code of Honor handshake is exchanged.

Following a rapid back and forth, Castle takes a powder on the floor. The Boys fans him relentlessly.

Castle and Gresham chain wrestle on the mat until Castle lifts up Gresham over and over then finally delivers a gutwrench suplex. Castle is fanned again before he and Greham execute a series of cool roll-ups. Castle spikes Gresham with his Bangarang to the delight of the crowd but the Octopus by Gresham forces Castle to submit.

Gresham and Dalton shake hands after the match.

Jay Lethal, Sonjay Dutt and the mammoth Satnam Singh arrive on the scene. Singh double chokeslams the Boys like they were small children. He catches Dalton leaping off the apron and hurls him into the stairs. Gresham is distracted by Singh who literally dwarfs him. Lethal drops him with a Lethal Injection. Lee Moriarty tries to save the faces. Singh no-sells all of his punches and chops. Singh tosses him into the air like he would a trash bag. Moriarty lands with a thud.

Crutch and all, Matt Sydal enters the fray. Not a good idea. Sydal whacks Singh with the crutch. Singh snatches it and breaks it in two. Lethal and Dutt stomp Sydal in a corner. Singh prepares to powerbomb Sydal. Samoa Joe clears the ring with a steel pipe. Gresham and Joe bump belts.

I hate to say it but this is a pretty terrible match. Just a lot of awkward moves and bumbling. Vickie Guerrero is not with Nyla. She is still out of action after Nyla mistakenly nailed her on Dynamite this week.

The fight hits the floor almost immediately with Nyla slamming Rosa into the steel barricade and Rosa landing a nice bulldog off the steel post. Back in the ring, Nyla rocks Rosa with a headbutt and chokes her over the ropes. Rosa regains the advantage by pulling the ropes down on Nyla. Nyla tumbles to the floor. Nyla hits the apron on the way down hurting her back. Rosa takes too long to follow up. Nyla catches her leap off the apron powerbombing her on the apron.

A stunner and a double knee smash in a corner takes the life out of Nyla. Numerous shotgun drop kicks send Nyla to the floor. Rosa barrels through Nyal with a twisting dive off the ropes to the floor. Rosa turns a Beast Bomb into a destroyer. The hometown fans go mental for that.

Tony Schiavone says that Nyla’s new hairstyle is getting in her face. Perhaps that is why she is off her game? What you talking about, Schiavone?

Nyla almost pins Rosa with a slam. Rosa retains with sneaky roll-up for the lackluster end to a lackluster match.