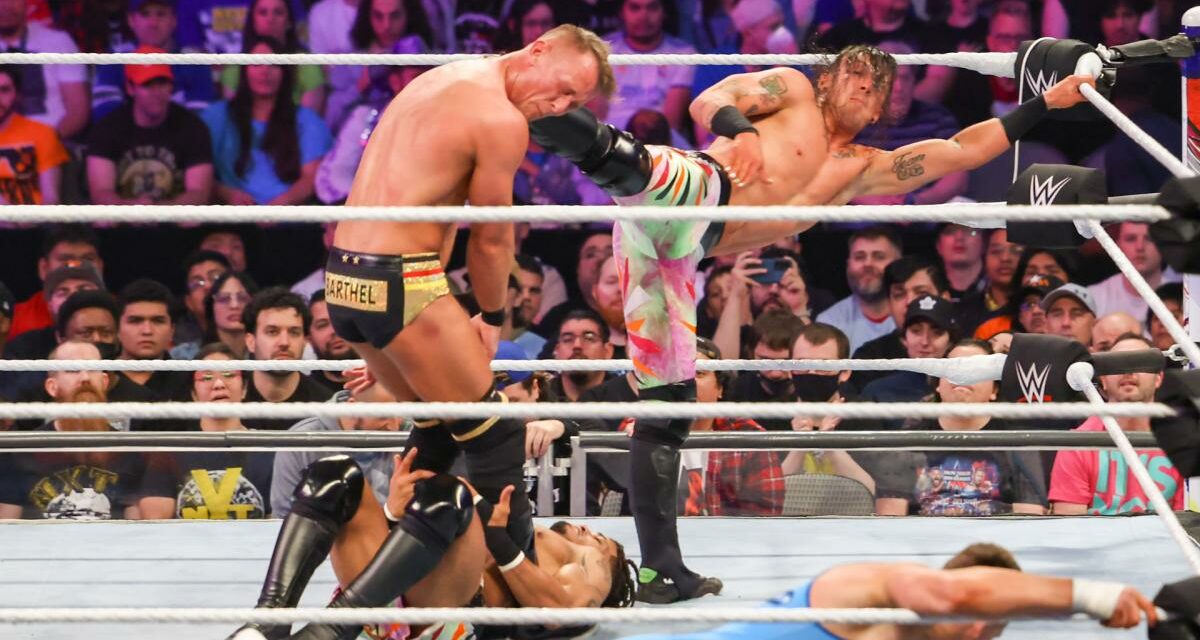 The WWE has fired Nash Carter.

One half of the NXT Tag Team Champions and the MSK team was let go after his wife, Impact wrestler Kimber Lee, posted accusations of abuse and then a photo of him imitating Adolf Hitler on Twitter.

Just another look into the kind of person @NashCarterWWE is….@WWENXT @wwe I’ve hid so much for so long because I was so mentally abused. Not to mention the countless anti LGBTQIA+ statements him and his family make….. pic.twitter.com/hzDciXr8bR

She had this to say after the WWE’s decision had become public.

#JusticeForNashCarter #WWENXT
I will not give up and I will continue to fight for my friend and his innocence. For those saying to release the texts, I’d much rather have him bring it to the court for a slander and defamation case. This is only the beginning.

It’s interesting when you want to intentionally get someone fired from their job and at the same time say that you want to take them for all their money.
But if the person has no job, how will you get the money? 🤔🧐

And who brought it to light with the intention to get him fired? Picture never needed to be released because it does not correlate to the man that he is. She kept this pic in her arsenal with a malicious intent. This is slander and defamation.

The hash tag “#JusticeForNashCarter” has been trending on Twitter with fans posting their comments.

If Nash Carter was such a racist and a N*zi then how could he be a long-time tag team partner and friend to TWO WRESTLERS OF COLOR? #JusticeForNashCarter pic.twitter.com/MQT3VWUqCY

Took WWE a YEAR to fire Veleteen Dream for accusations but it only took WWE a WEEK to fire Nash Carter for FAKE accusations. #JusticeForNashCarter pic.twitter.com/IuB1fyaDxG

This woman has well calculated this and planned it out to perfection, very vile #fvckkimberlee #JusticeForNashCarter

@Kimber_Lee90 should be proud of herself for speaking out. #domesticviolence comes in many forms including #narcissisticabuse. https://t.co/b2S358ioCE

Love you so so much ❤️ I’m so sorry that it felt you had to prove this. Leaving this type of situation is beyond difficult. Wishing you all the best 😘 love you

Queen.E.Marie entered the war of words with Lee after she made the allegations.

Hey @WWENXT this is my face after your tag champ @NashCarterWWE got wasted and hit me so hard he split my lip open. He told me I’m a wrestler so I’m always marked up. I’ve hid this for a year and even forgave him. But I can’t hide it anymore. pic.twitter.com/qdYjcneAwC

“Just so everyone is aware, @NashCarterWWE has been living with Wes and I for months ever since she was in the hospital (which she checked herself into). He’s actually been the one trying to avoid her and HER mental abuse. They haven’t been together. He went to 1 therapy session,” wrote Queen.E.Marie in response.

Sooo should I pull a @Kimber_Lee90 and post one of those “you have 24 hours to reveal the REAL truth or the proof is coming out” posts or nah??
🤔 🤔 🤔
Now mind you, she believes I’ve harassed her in the past so knowing this, she may try to stop me from releasing the truth.

This sparked a back and forth between the two.

Didn’t I already call it with that second tweet seen below? 🤔 She had already told me in our previous conversation she was gonna tell everybody about some supposed “drug addiction” 😂 I’ll take a drug test right now for ya Kim! Lol. pic.twitter.com/jkDzUlMNy9

You would constantly ask me when you could come over to meet our cat Aurora…shall I go on @Kimber_Lee90 ? But you don’t know me?

And let me not forget to mention that when she got served those papers she was so upset that she ripped up ALL of Nashs’ posters (one of a kind ones with other wrestlers’ signatures, etc). This is a case of an enraged soon-to-be ex-wife who feels she’s entitled to alimony…