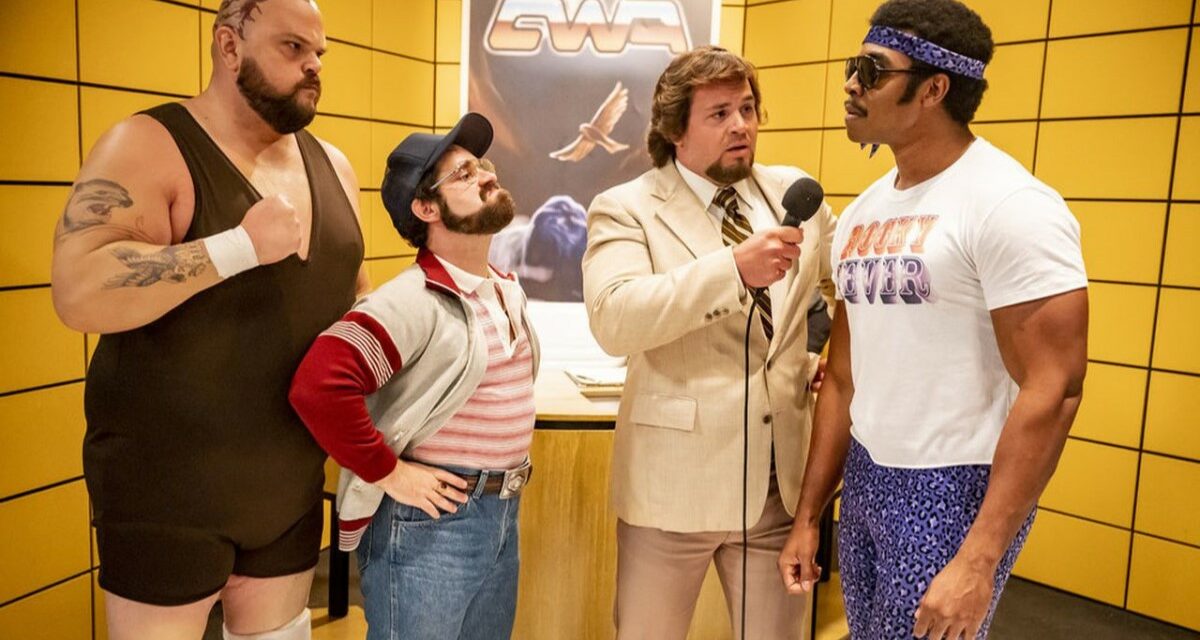 This week’s episode of Young Rock is a little different than most others in the series. The most family-focused episode thus far, it still provides some laughs but as it shows some cracks forming in the foundation of Rocky and Ata’s marriage it certainly takes on a sombre tone overall. Don’t worry, this is no 1980s “very special episode”, and as always there’s lots to enjoy (and cry foul over) for wrestling fans — this time in Jerry Lawler’s Memphis territory where Rocky is trying to keep his wrestling dream alive.

First up, though, it’s 2032 and we see what’s up in the most uneven part of the series: Dwayne Johnson’s presidential campaign run. This season has struck a better tone with these segments, and the scenes between Johnson and Randall Park have felt less like forced segues than last year. Johnson’s team is trying to deal with the fallout of his Twitter war with Julian Echo (Sean Astin), a chiropractor who has been dogging Johnson online with claims of him being a bad man. Last week, Johnson fired back at him, calling him a jabroni, which sparked off a juvenile back-and-forth that left The Rock looking less than presidential.

As Johnson seeks to regain his cool and composure, he tells Randall about making it through tough times before – including some trials in 1987 when he was newly arrived in Nashville, waiting for Ata to join him and Rocky in their apartment. The problem is that Rocky never secured an apartment, and Dewey is living with “Downtown” Bruno Lauer, who is not the caregiver type. Dewey is not enrolled in school, because Rocky hadn’t set that up either, so there’s Bruno and Dewey in a bar with Bruno using Dewey as a stand-in bodyguard when a mouthy fan approaches him. A little raised eyebrow and the disgruntled fan is convinced to move along.

Rocky is working for Lawler, wrestling the likes of Jeff Jarrett and Crusher Yurkov. Actor/wrestler Patrick Cox plays Yurkov (better known as Bam Bam Bigelow, and who only used the moniker of Crusher Yurkov while wrestling in Texas for WCCW), and he certainly has the look of a young Bigelow. Ryan Pinkston as Bruno steals a lot of scenes with his giggle and bits like making eggs for himself and Dewey in his bathroom/kitchen.

As Dewey enjoys the unsupervised life, we witness the beginnings of his penchant for stealing which had come up in the first season. From cowboy hats to candy bars, Johnson is getting away with stuff that he knows won’t last as his mom is almost set to join the family. Mind you, he is covering for his dad on the phone, lying to Ata about their apartment and how he’s doing in school. When she shows up outside of the arena, which neither Rocky nor Dewey are ready for as they were both losing track of days, the jig is up.

Ata is furious when she learns of everything that’s been happening, and it doesn’t take her long at all to get Dewey in school and find an apartment — although, at this point, it’s only for her and Dewey, and Rocky is not welcome. He doesn’t put up much of a fight and says “If that’s what you want.” Ata snaps back that “None of this is what I want, but it’s what it is.”

We finish back in 2032 as Johnson’s team reveals a plan to surreptitiously tear down Julian’s character, but Dwayne ties everything together by saying that making mistakes with good intentions is understandable, but not making a mistake that is purposefully malicious.

All in all, a straightforward episode that starts calling into question the relations between the three Johnsons. As Dwayne has himself spoken of the “complicated” relationship he had with his father, it’s no surprise that it is finding its way into the series. It will become most interesting to jump back and forth through the different times periods and see how Joseph Lee Anderson (Rocky) and Stacey Leilua (Ata) play the couple at these different stages of their marriage.