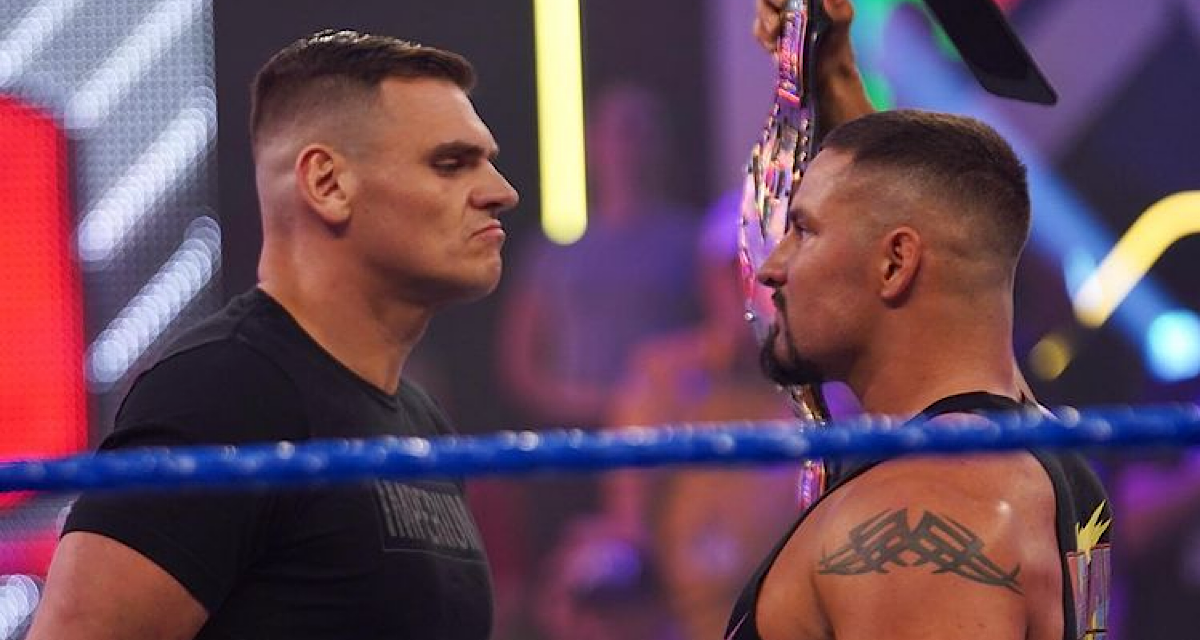 WrestleMania weekend was eventful for young Bron Breakker, from inducting his father and uncle the Steiner Brothers into the Hall of Fame on Friday to losing in the main event of Stand & Deliver on Saturday afternoon. Last night on RAW, Breakker recaptured the NXT Championship from Dolph Ziggler which led to the opening segment of NXT. Fighting through vocal “we want Ziggler” chants, Breakker said he “brought the NXT Championship back where it belongs.”

Out came Gunther, Fabian Aichner, and Marcel Barthel of Imperium to interrupt. “You cannot call yourself the best until you step in the ring with ‘The Ring General’ Gunther,” the challenger said, ultimately gaining a championship matchup for later in the episode.

Imperium vs The Creed Brothers

Before the first break, Julius and Brutus Creed blindsided the former champions to initiate this impromptu opener. Aichner once again showcases his incredible strength against his beefy opposition, and the duo in whole proves very technically sound. Brutus’ leg is worked on throughout picture-in-picture until Julius makes the comeback, but Imperium regains control. The latter duo attempts their signature stereo dropkicks, but instead, Aichner leaves the match and his partner. Barthel is busted open, and the Creed Brothers capitalize to a stunned and confused audience reaction. “I’ve got no explanation for that whatsoever,” says commentary, and neither does anyone else. As the victors celebrate, the mystery tag team from weeks prior attack from behind; it’s Pretty Deadly of NXT UK making their NXT US debut.

The new North American Champion Cameron Grimes is welcomed to the ring to dueling “you deserve it” and “no you don’t” chants. Orlando is feeling ruthless tonight apparently. “I made good on my promise, and I know my dad is looking down smiling ear to ear, ‘cause his boy did it,” says Grimes. Not long after, Solo Sikoa interrupts to issue a championship challenge. “Uce, you’re on,” responds Grimes.

Joe Gacy and Harland are in the back, and the former speaks uneasily about the importance of family. Draco Anthony is watching, and the message makes him lash out on Xyon Quinn.

Tiffany Stratton is interviewed backstage about “Sarry the schoolgirl” costing her last week’s matchup. “I’ll say it one more time very slowly so Sarray can understand: I’m not a loser!”

InDex received 89 percent of the votes on Saturday for NXT’s hottest couple award, but commentator Wade Barrett is still calling collusion. Instead of the match, Barrett speaks about Ezekiel’s debut on Monday Night Raw, reminiscing about how he teamed with “Big Zeke” in the Corre over a decade ago. He then argues that Beth Phoenix forged her licensing, meaning that Lumis and Hartwell aren’t officially married. Anyhow, Lumis makes the comeback to “sexy Dexy” chants before the two competitors pull themselves into the ring post. Their significant others try and fail to assist, resulting in a double countout and an abrupt closing to this hilariously insignificant segment.

The new NXT Women’s Tag Team Champions Raquel Gonzalez and Dakota Kai’s backstage interview is drowned out by “that was stupid” chants regarding the previous bout.

Dueling “we want Gigi” and “no we don’t” chants come from an abnormally obnoxious audience. Kai and Gonzalez are only a week removed from repairing their friendship, although commentary suggests some cracks. After commercial break, Kai receives the lukewarm tag, but Toxic Attraction comes back on top. Thereafter, Wendy Choo attempts to help again, but Mandy Rose takes her out allowing Dolin and Jayne to regain their championships over Gonzalez.

Joe Gacy and Harland are back, now talking about chaos. “What happens when you can’t control it? The chaos then controls you,” says Gacy.

Former president of the Danbury Trashers AJ Galante is in-ring; “Don’t know who we are? Look us up.” He introduces Tony D’Angelo, who defeated Tommaso Ciampa in his farewell match at Stand & Deliver. A card with D’Angelo’s blood signifies “the oath of the don,” which Galante struggles to explain over audience interjection. But Galante painfully makes it though, places a ring onto D’Angelo, and crowns him the don.

The new NXT Tag Team Champions Wes Lee and Nash Carter are interviewed backstage, but they’re interrupted by an injured Grayson Waller and Sanga. When Waller is back at 100 percent, he and his heavy will be gunning for MSK.

Dakota Kai is destroying the backstage area, declaring, “Mandy Rose, you are not safe.” Her schizophrenia is probably back after a week of reform.

Both competitors have gone viral for different reasons, and it isn’t particularly for their wrestling chops. However, they hold their own for fledgling national television grapplers, and Lyons delivers a big second-rope superplex. Lyons “doesn’t get all of” her finishing tornado kick, but the famous split-legged pin puts it away. The referee visibly pleads with Legend to continue selling, but it’s too little too late.

In a promo package, Kushida sends a message to Von Wagner and the Robert Stone Brand after ripping Ikemen Jiro’s blazer.

After minutes of solid chain wrestling, the 6’4” Gunther gains the upper hand with an elegant leapfrog and big boot; there’s nobody like him. He tries again, but Breakker catches him with a powerslam and spear before getting sent into the steel steps outside. Following picture-in-picture, the competitors trade strikes and suplexes as Breakker fights through an injured left shoulder. Gunther counters with a beautiful dropkick and powerbomb for two, thereafter failing to put away Breakker with his finishing top-rope splash. The champion catches Gunther with a spear and exchanges blows with Gunther, but the latter cinches the sleeper. Breakker escapes, and with incredible strength lifts Gunther up for the finishing slam for three. A rare Gunther loss comes at the hands of an unstoppable project in Breakker to close tonight’s episode.

The lower third appears, but the night isn’t over yet. Rick Steiner appears on screen, tied inside of a cage. “Bron, I told you that family was everything. Let’s see if we can teach this old dog some new tricks,” says Joe Gacy.

Gunther, Fabian Aichner, and Marcel Barthel of Imperium are three of the most consistent competitors in NXT. No matter what ridiculous changes are thrown their way, the in-ring output always impresses. Weekly NXT remains consistently average, besides a distractingly entitled Orlando crowd tonight.