Matt’s Mania: Back for more Mania! 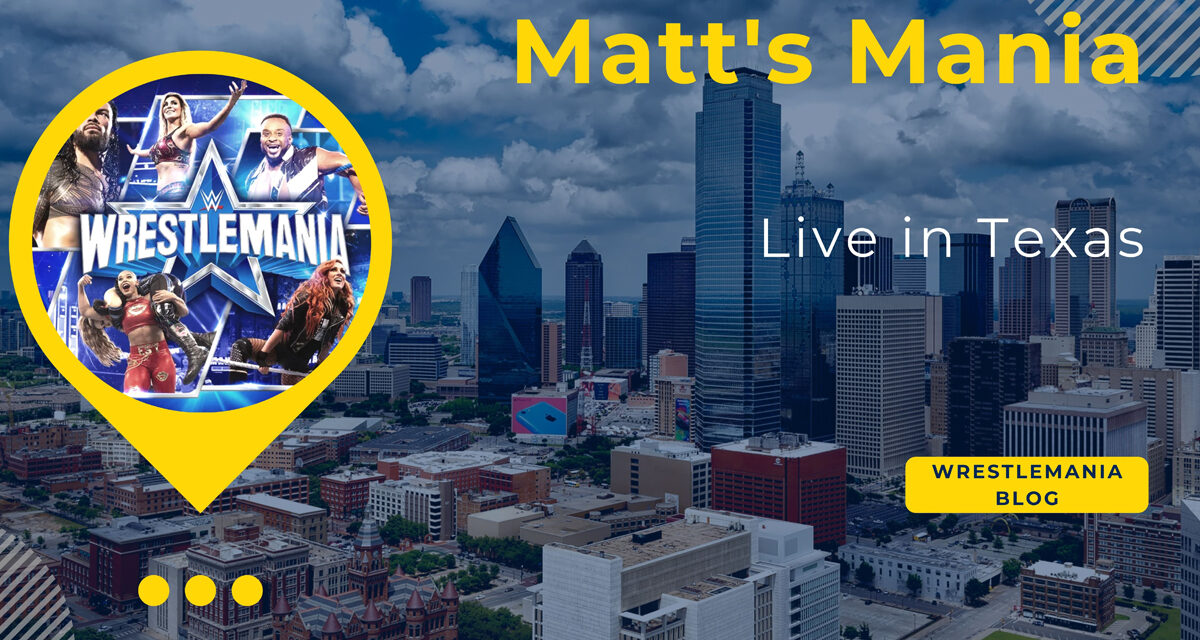 WE HERE! WRESTLEMANIA NIGHT 2! SHOULD BE A GOOD ONE! 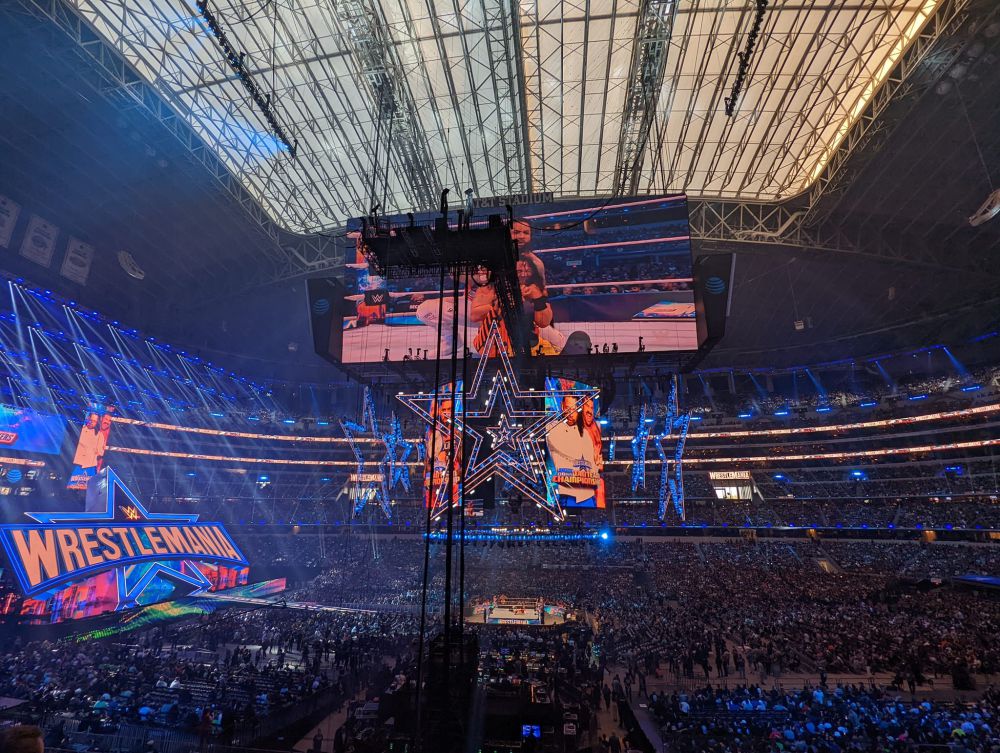 It has been a wild two days here. Currently, I’m running on about five hours of sleep, but it’s been worth it.

On Friday, I tried to take in some non-wrestling activities and went and played golf, one of my favorite hobbies. It was my first time truly playing this season and it was a great time. A little windy, but nothing beats being out in the sun and 75 degrees when you haven’t seen that warm of weather in six months.

Outside of the sunburn (oops!), I had a lot of fun and only hit a few balls into the water.

Friday night, I traveled down the road to head to the return of Ring of Honor. And boy howdy (I can say that because I’m in Texas), it was a real fun show. The match between FTR and the Briscoes was one of the best pure tag team matches in a long time and FTR is really staking their claim as being something special. With a babyface run imminent, my only hope is that they will be managed by Bret Hart (maybe at Double or Nothing?) for at least one match.

This was a match you should go out of your way to watch, and it’s going to take something monumental happening at WrestleMania to top this for match of the weekend.

With WrestleMania incoming, I am reminded how thankful I am this is now a two-night event. I’m not thrilled about paying full price for two nights, mind you, but after the WrestleMania 35 debacle in New Jersey (that show might still be going on), having it trimmed down to two nights has been a welcome change of pace.

Tonight we have “Stone Cold” Steve Austin. That’s why I’m here. That’s why I’m excited. If I have to sit through a Baron Corbin match or a Sheamus match to get to Stone Cold, it’ll be worth it. Just like Andy Dufresne crawling through a sewage pipe to get freedom in Shawshank Redemption, we will all await the glass shattering and come out smelling good on the other side.

Even though I’ve been to WrestleMania at AT&T Stadium before, and have been to the stadium several times for football games, there’s still something magical about the place.

Today, I pick up my friend from the airport, we eat some great BBQ and we watch the Granddaddy of ’Em All. Should be a good one.

My report from ROH Supercard of Honor is up as its own story:

Supercard of Honor proves ROH is in transition

DALLAS — In 2019, I attended my first WrestleCon Supershow. I had such a fantastic time that I wanted to make it a must-see every WrestleMania weekend.

Well, then the pandemic hit and the show has been off for two years. However, it returned this year at the Fairmont Hotel in downtown Dallas with another fun, exciting and unpredictable show.

The highlight was certainly the opening match between ROH World Champion Bandido and Speedball Mike Bailey. I would be shocked if another match won the $5,000 best match bonus. These two did everything and it was spectacular in every sense of the word.

The show also featured one of the wackiest 10-man tags you’ll ever see, as Team PCO, which ended up being PCO, Enzo Amore, Fandango, Jimmy Wang Yang and Barry Horowitz of all people, taking on Team Atsushi Onita, which was Onita, the Rock N Roll Express, Juice Robinson and Colt Cabana. It wasn’t much in the way of a match, but PCO did his usual crazy things, including one moonsault to the ring apron to which Fandango turned to the crowd and said, audibly, “what the f—-?” 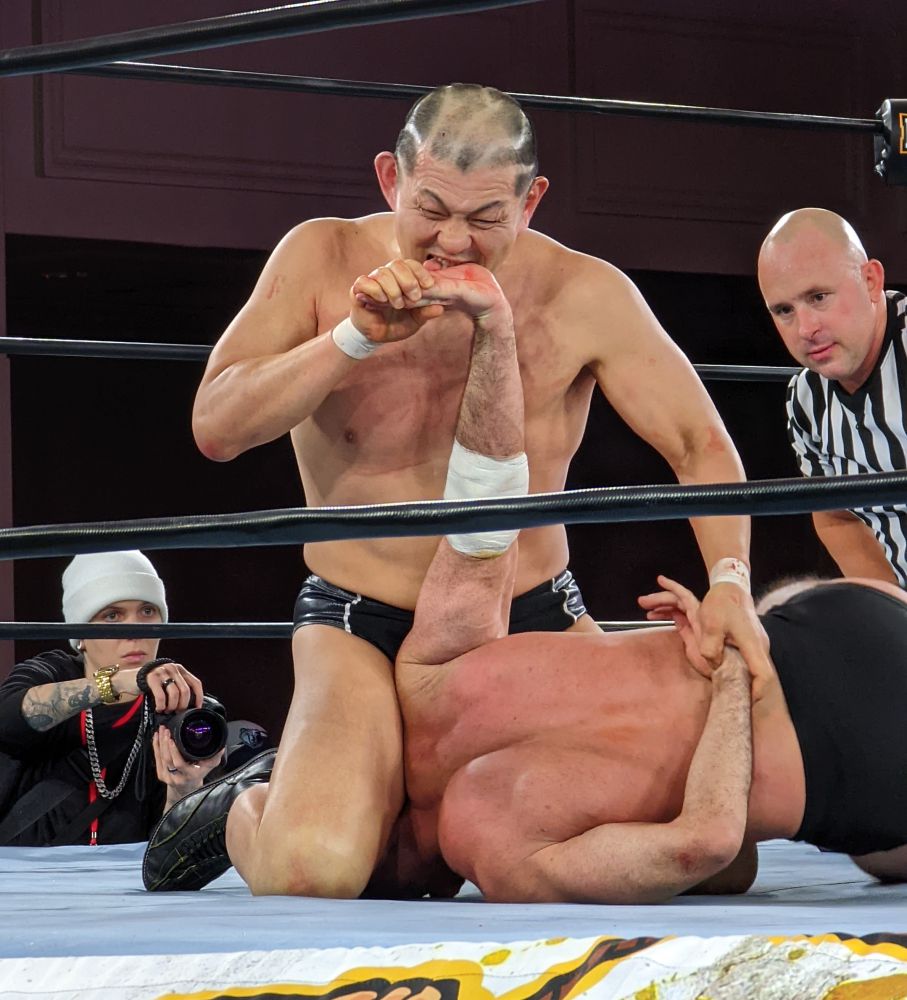 I got to see Minoru Suzuki for the second time within a few hours, as he defeated Biff Busick.

Mia Yim made her return to the ring for the first time in more than a year and didn’t look a bit rusty in defeating Athena in a good match.

But one of the unexpected highlights of the show ended up being the “Dirty Dishes Match” between Taya Valkyrie and her husband Johnny Morrison/Nitro/Bloodsport/WrestleCon. The loser had to do the dishes at home until the end of time. This was really a spectacle. Before the bell rang, some wash basins full of dishes and cleaning products were brought to ringside, and boy did they ever get used. These two smashes these gimmicked dishes all over each other, including Johnny loading up Valkyrie’s outfit with bottles and dishes and hitting a Starship Pain on her. They even brought out the kitchen sink! 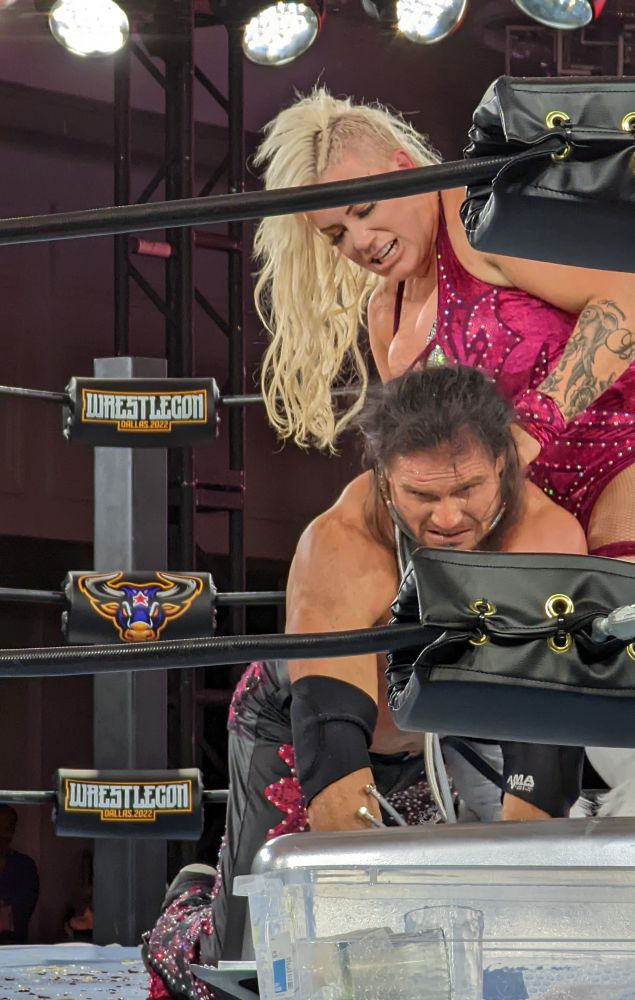 Marital tension is worked out in the ring as Taya Valkyrie faced John Morrison in a “Dirty Dishes Match.” Photo by Matt Bishop

Eventually, though, it was Valkyrie who made the comeback and got the win, earning her husband the name Johnny Dishes. This was a combination of comedy and a 1999 WWF Hardcore Title brawl. It was a lot of fun. 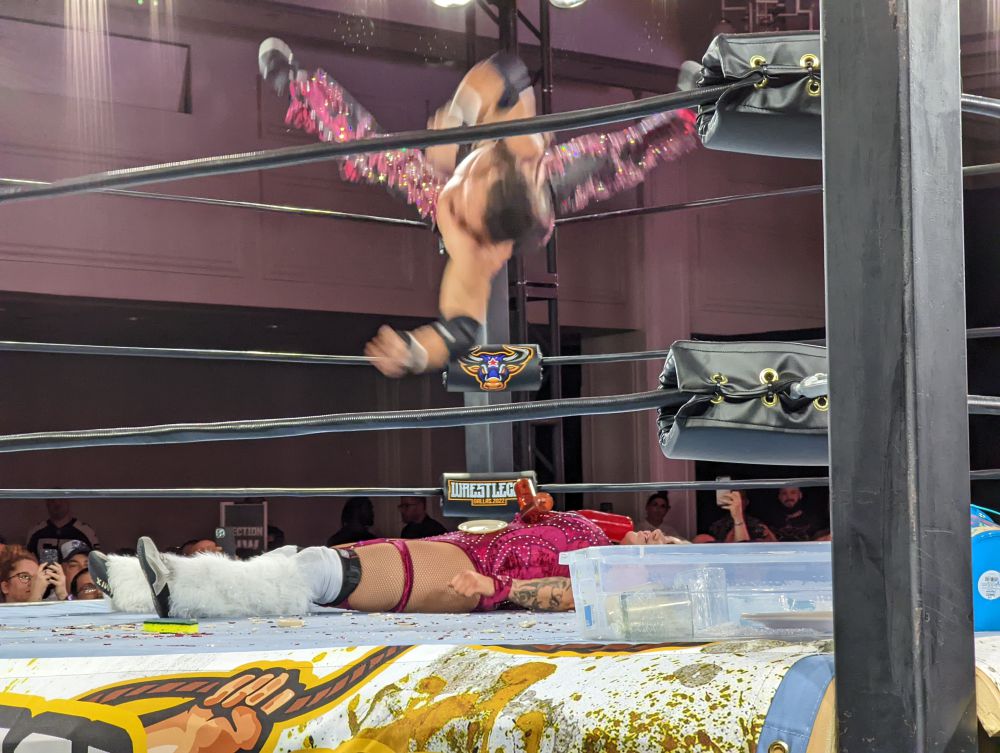 Note the dishes on Taya Valkyrie as hubby John Morrison is about to land on her. Photo by Matt Bishop

The show also featured cameos from Bret Hart and Justin “Thunder” Liger, as well, much to the delight of the crowd.

All-in-all, it was a great show from top-to-bottom, a good mix of everything. Now it’s time to get some sleep and rest up for another big day tomorrow!

DALLAS — If there is one thing that holds true about each and every WrestleMania weekend it’s that it is completely and totally hectic and things just don’t seem to go to plan.

From our last check-in, I made it safely to Dallas at about 1:15 p.m. CT. The airport, unsurprisingly, was a zoo. As I walked off the plane, I saw a load of NXT wrestlers in their NXT track suits in the terminal. I headed to the baggage claim to await my suitcase and my golf clubs (oh yes, there will be golf played this weekend) and, to no surprise, the autograph hounds were out in full force, awkwardly approaching the NXT group. Then, just a few seconds later, none other than Ric Flair in the flesh appeared in the baggage area. Surprisingly, he was left alone. Even more surprisingly, there were no “WOO’s” either.

As I was taking in the scene, I noticed it was taking an awfully long time for my bag to come. At this point, I’m looking at my watch because I want to check in to my hotel, drop off my things before heading to Bloodsport at 3 pm. The bags finally came so I bolted for the rental car shuttle, which of course took forever to get through the traffic to the extremely off-site rental car center at DFW Airport.

The rental car center was a disaster. By the time I had my car, it was 2:40. Yep, not going to make the hotel or Bloodsport on time.

By the time I walked into Fair Park, the 5th match of the 11 match card was getting underway.

As mentioned earlier, this was my first Bloodsport show. Once I settled down, the show was very fun. It was definitely a different vibe in the crowd because the matches don’t follow the same professional wrestling formula — which is part of what makes it great.

Timothy Thatcher was beloved by the crowd, which was shocked by his loss to JR Kratos. The show did a great job building to the final two matches. In the co-main event, Jon Moxley defeated Biff Busick by submission. The crowd was in love with both competitors, and they put on an early candidate for match of the weekend. Busick got busted open as he and Moxley walloped each other. Moxley raised Busick’s hand after. 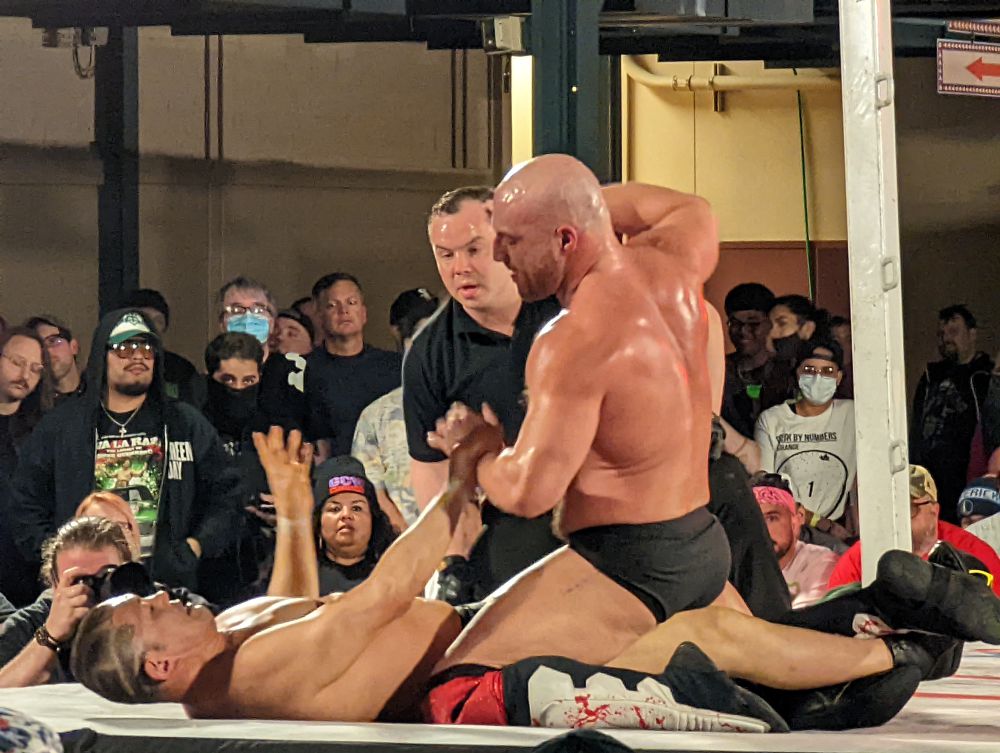 In the main event, Chris Dickinson made his return from injury and upset Minoru Suzuki by referee stoppage, shocking the crowd. The two traded shots and submission attempts throughout. But it was Dickinson who got the better of it and when the referee stepped in between he and the fallen Suzuki to stop the match, the crowd could not believe it. The fans loved both men greatly, but reacted viciously for a moment after Dickinson won, only to, within seconds, break out into loud chants of “Dirty Daddy!”

I bolted out of the venue to head back to my car to get back to the hotel and my precious In-N-Out Burger, which was exceptionally tasty after 12 hours of not having anything to eat or drink.

Now, fully refueled, I have about 40 minutes before I head back to downtown for the WrestleCon Supershow. Should be a good one!

DETROIT — For me, WrestleMania weekend is special.

It’s the time of the year when wrestling shines. When the wrestling world focuses its attention on one place. As I sit here in the Detroit airport awaiting my flight to Dallas for the big weekend, it’s dawning on me how much of a tradition this is becoming for me. I’ve attended every WrestleMania fans have been allowed at since 2016 and it’s such a great time to reflect on your wrestling fandom.

However, my favorite part was gone last year. While WrestleMania itself is the sizzle — no one can compete with the pageantry and spectacle that is Mania — it’s the litany of independent shows that is the steak. If you’re going to WrestleMania and not sampling everything else on the menu, you are doing yourself a disservice — that’s the joy of Mania week.

I’ve been taking in the independent shows since the first road trip Mania I went to, also in Dallas, in 2016. To look at some of those cards I went to then, especially EVOLVE 58 and 59, they are littered with the current stars of wrestling. Drew McIntyre, Johnny Gargano, Zack Sabre Jr, Will Ospreay, Ricochet, Matt Riddle, even a young Darby Allin were on these shows. And the talent level has just gotten better and better. 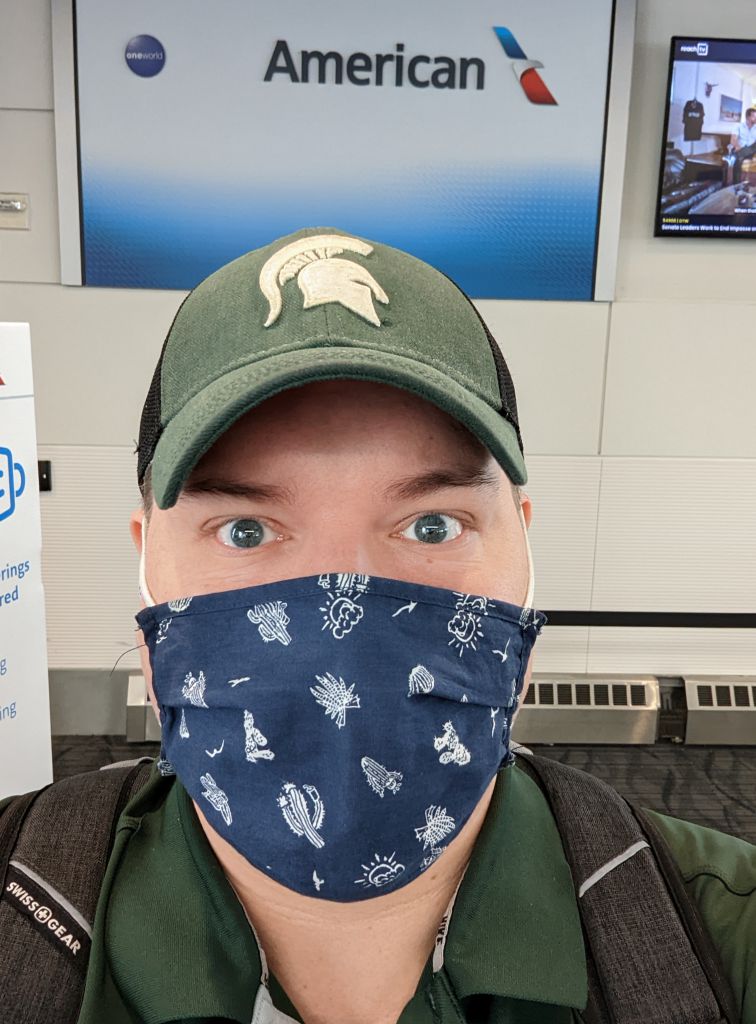 Matt Bishop is on his way, Dallas!

Today, I’ll be bolting from the airport straight to Fair Park to take in Josh Barnett’s Bloodsport. I’ve been itching to see the Bloodsport show the last few years but it just hasn’t worked out. With the card this year, it was a no brainer. Minoru Suzuki, Jon Moxley, John Hennigan, Biff Busick to name a few will undoubtedly beat the tar out of their opponents. It’s going to be great.

In 2019, the WrestleCon Supershow was one of my favorite shows of the weekend, so I made immediate plans to hit the Supershows return this year. You never know who is going to show up on these shows, which makes it intriguing. Then, on top of it, Highspots, the promoter of the show, is offering a $5,000 best match bonus this year. That should light a few fires, that’s for sure. The Supershow in 2019 started off with Road Warrior Animal and Ric Flair coming out to open the show and it didn’t settle down from there. There are big shoes to fill this year.

I’m beyond excited to get this weekend started — stay tuned to this space for updates throughout!