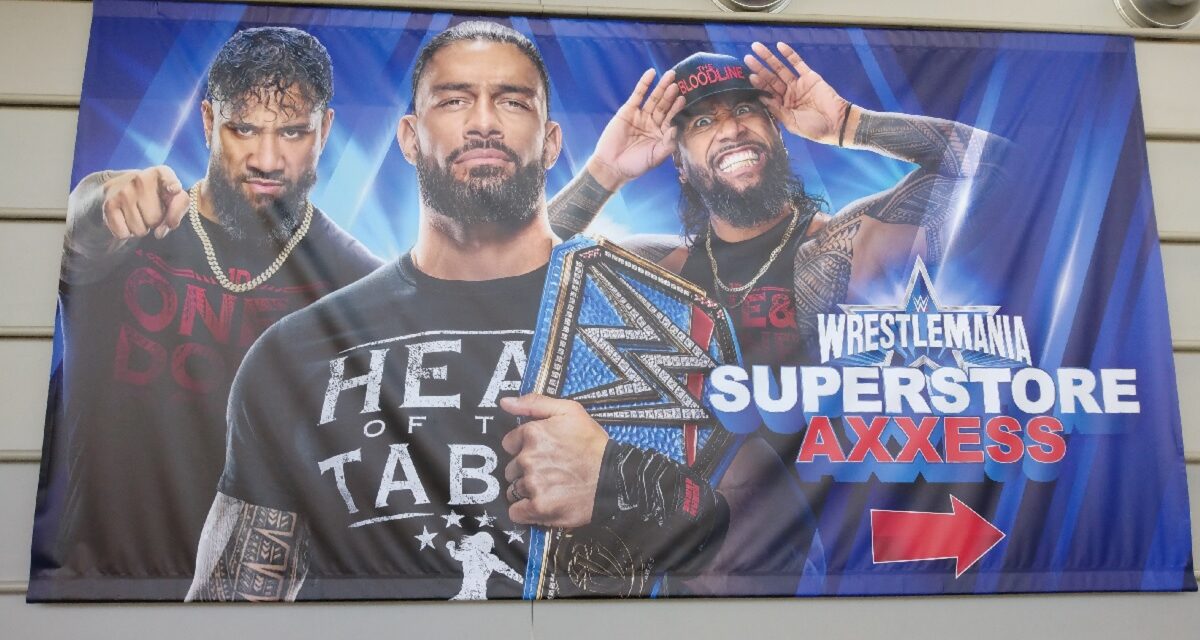 DALLAS, TX – Pretty much everything in life is better if you have time and money. That certainly holds true for the thousands of attendees of the WWE Superstore Axxess, which ran from last Thursday through to Monday night as part of WrestleMania weekend.

On Sunday afternoon, a steady stream of members of the WWE Universe lined up to enter the store, which was set up in the top level of the Kay Bailey Hutchison Convention Center in downtown Dallas. Once inside, the hall had been turned into a veritable shrine to all things WWE.

The lobby was adorned with massive posters promoting this weekend’s matches. Inside the hall, there were various exhibits and experiences to see, opportunities for photo-ops and autographs, superstar panels, and of course racks and shelves full of merchandise.

There were a lot of free exhibits to check out, including the display of the various memorabilia items that were showcased on the A&E show WWE Most Wanted Treasures (WWE’s archivist Ben Brown, who was regularly featured on the show, was seen wandering the crowd as well). 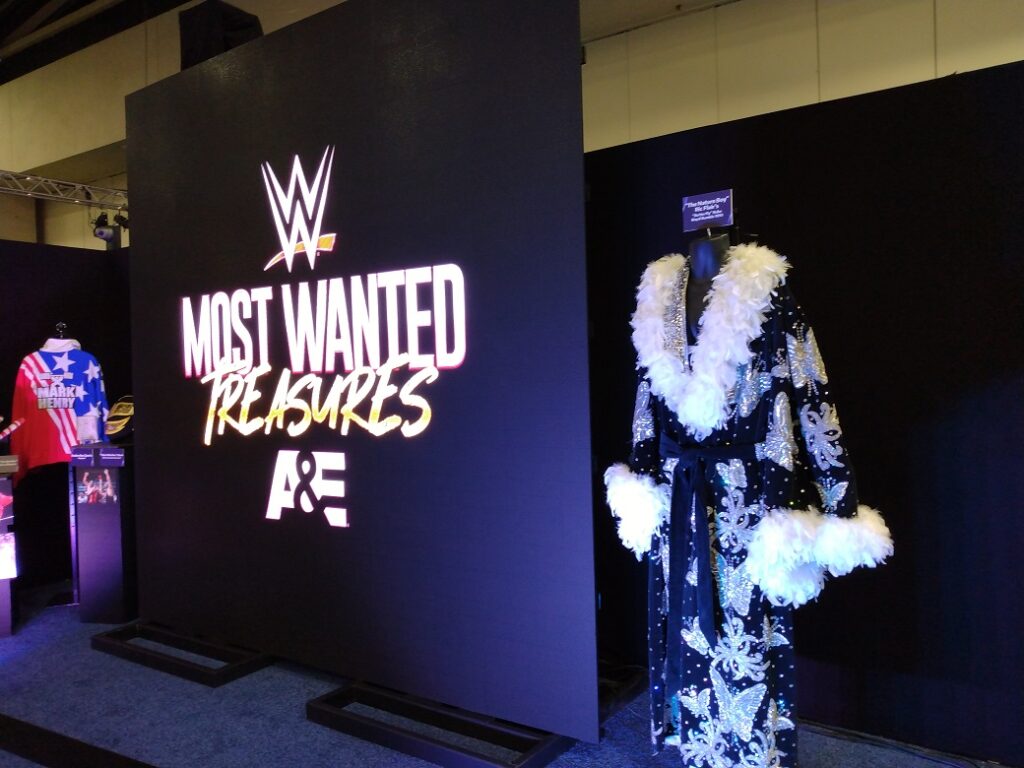 Elsewhere, there was a display of ring gear worn by superstars from past Manias, including a rare display of the back brace that Andre the Giant wore beneath his singlet during the main event of WrestleMania III.

On one side of the building, kids and parents were getting temporary tattoos in the Peacock Parlor, while elsewhere, Rob Schamberger had a kiosk where a number of his WWE portrait prints were on display. The Mattel Action Figure Experience gave a preview at some of the newest offerings that will hit the toy store shelves soon, including a new nWo Funko Pop set. And there were various standees of WWE Superstars strewn about the hall for selfies. There were some also free photo booths where you could get a digital and print copy or a Boomerang animated photo with a holographic Roman Reigns.

But to partake in any of the Premium experiences, you’d need to break out your credit card (as an aside, these cashless venues really suck for out-of-country visitors, who bring US cash to avoid exorbitant credit card exchange rates).

Those experiences (and prices) included: $10 for a photo on a set designed to look like Alexa’s Playground, or the KO Show, or Miz TV; the chance to sit behind the commentary desk and call a historical WrestleMania moment ($25); or the chance to re-create a superstar entrance on a miniature entrance ramp, complete with theme music ($25). This latter feature actually was quite a popular attraction and actually drew a crowd of fans who would enthusiastically cheer as people came out, with huge applause if the person hit all the signature poses of the superstar in question. 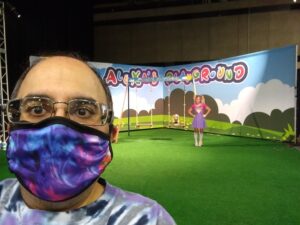 One of the biggest areas was dedicated to The Undertaker, billed as The Undertaker’s Graveyard. This walk-in area included displays of gravestones of all of the Undertaker’s past WrestleMania opponents, funeral sets used in his past promos, and you could even take a picture of yourself in the box in which Paul Bearer was buried alive in concrete. Entrance to that area was a bargain at only $10 – and also featured a Taker-exclusive merch area afterwards. Exit through the gift shop, and rest in peace. 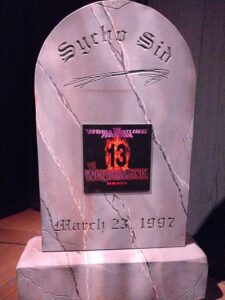 Sycho Sid’s tombstone was part of the special Undertaker exhibit at Superstore Axxess.

There were also various Superstar panels each day, ranging from $50 to $150 depending on the talent involved. On Sunday, the featured panels were advertised as being: Drew McIntyre, Finn Balor, Shinsuke Nakamura, and Rick Boogs (and Boogs would not have been there after his injury on Saturday); Seth Rollins and Becky Lynch; and a post-Mania surprise guest. It’s hard to gauge how popular these were – an hour before WrestleMania on Sunday, there were plenty of tickets available for the Sunday night session and even Monday’s late-night headline session with The Undertaker.

But even if those don’t sell, everything else seemed to be moving. Befitting of the name Superstore, the hall was indeed packed with walls and shelves of memorabilia at all prices. From T-shirts to water bottles to baby clothes to toys – just about anything you wanted, you could find. One kiosk was dedicated to Championship Titles and related replica material. They also had a high-value store where you could buy limited edition autographed memorabilia like a framed WrestleMania 37 turnbuckle signed by about a dozen Superstars ($1,200) or a framed Seth Rollins entrance jacket, which looked too expensive for me to get approval from my bosses here at Slam, so I didn’t bother asking.

Rather, I bought myself a Rhea Ripley shirt and a neat Undertaker Hall of Fame shirt – unfortunately, the only adult sizes still available in that one were Large and 4XL. I figured it would be easier to grow into a 4XL than shrink into an L – especially thanks to all the free Snickers bar that were being handed out at the session, as Snickers was the primary sponsor), I went with that one. 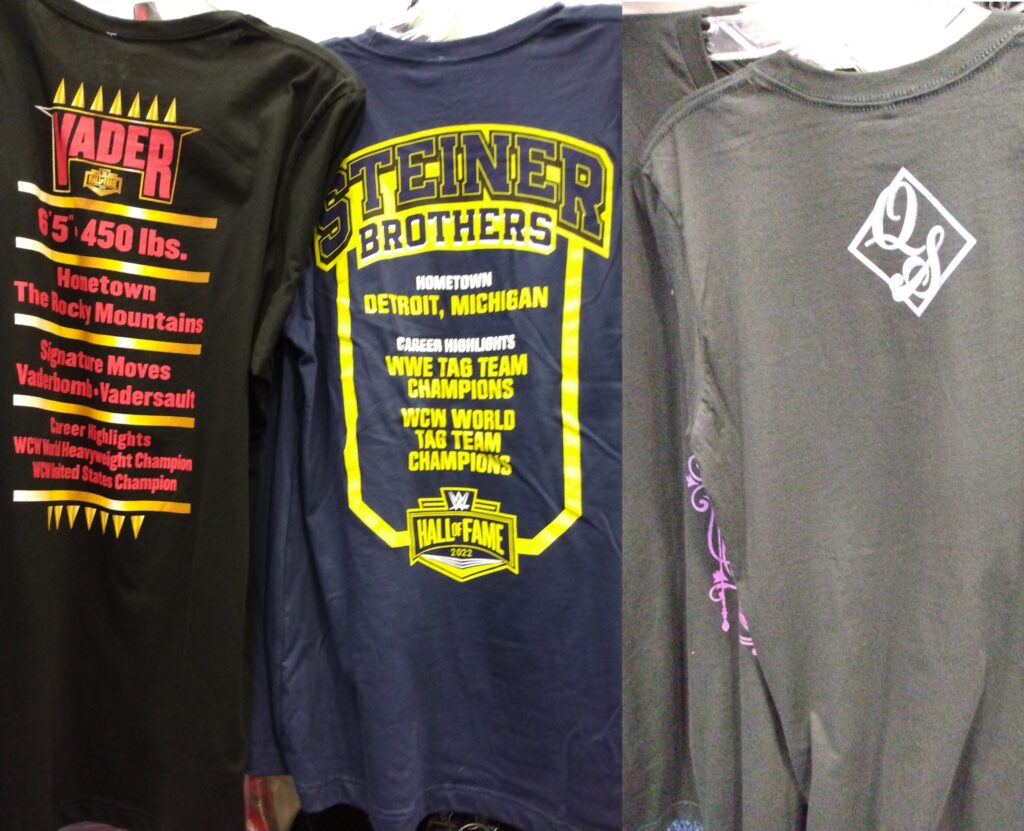 The backs of the 2022 Hall of Fame Class inductees’ shirts listing their accomplishments. Left to right: Vader, the Steiner Brothers, Queen Sharmell.

At that point, I had pretty much run out of time, as I had to start making my way to AT&T Stadium (about a 20-minute drive away from the Superstore), and I had spent enough money, so I called it a day.

Which is not to suggest that Superstore Axxess can’t be enjoyed without a bit of both – I liked seeing a lot of the historical memorabilia, and it really makes me want WWE to create a physical Hall of Fame / museum where they can be displayed on a more permanent basis. But if I had more of both, I’m sure it would have felt even more “super.”