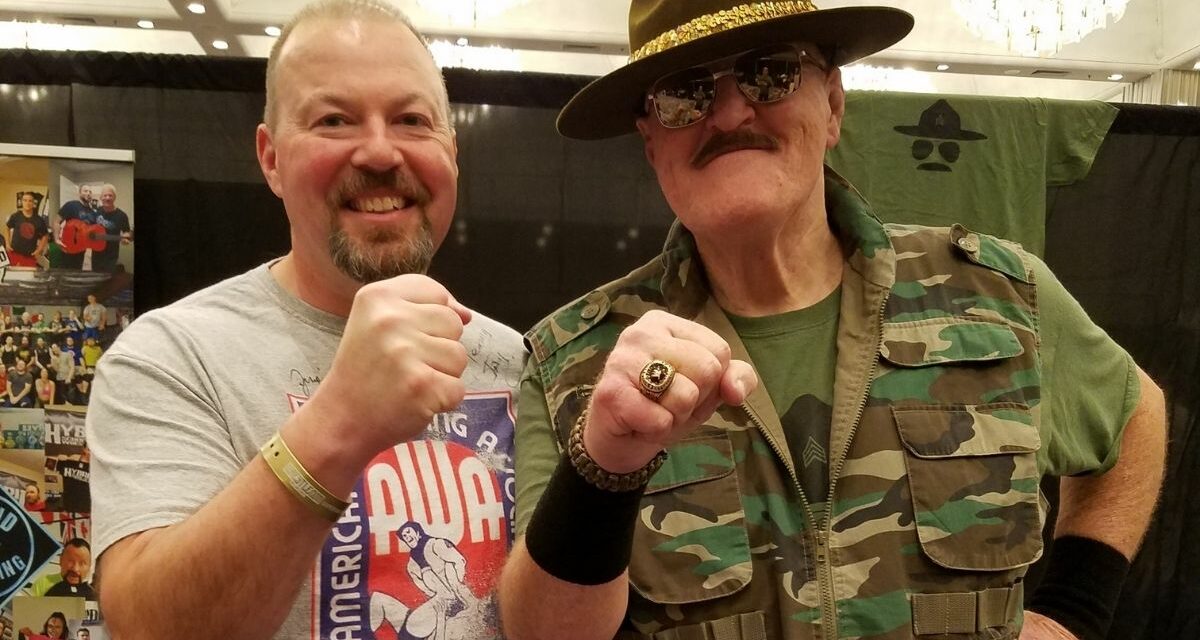 DALLAS – I just attended my first Wrestlecon in Dallas. I’ll be honest, I was a little nervous because I didn’t know what to expect. The three-day event, which ran from March 31st through April 2nd, was packed with excitement and there were a lot of people in attendance to see their favorite wrestlers. 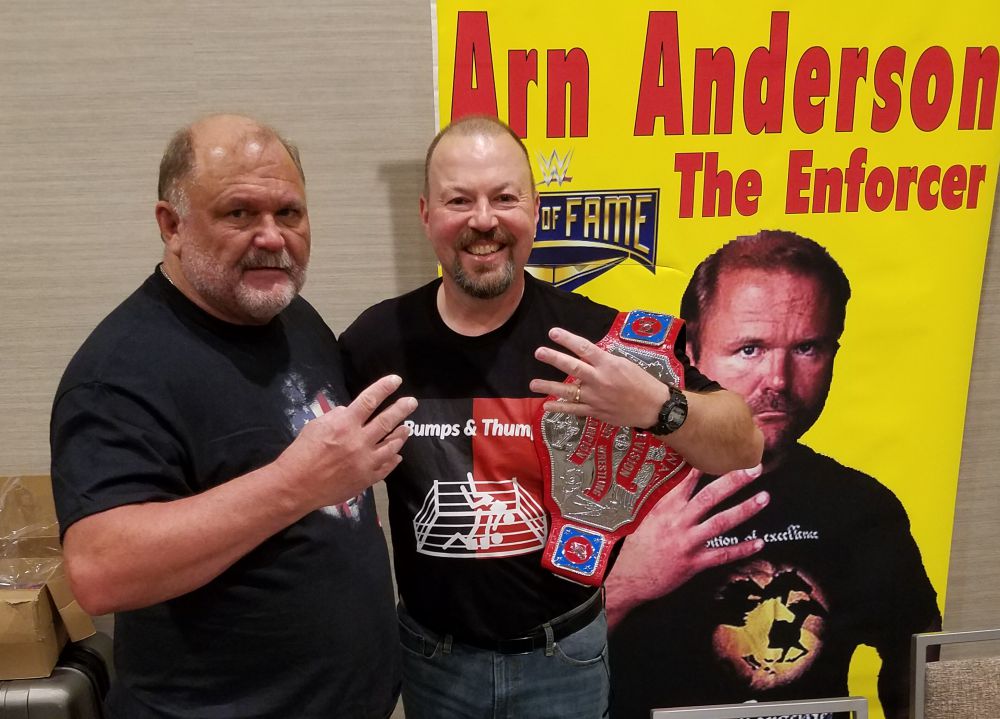 Arn Anderson and Brian Ferguson at Wrestlecon, which ran March 31-April 2, 2022, in Dallas, at the Fairmont.

When I arrived at the Fairmont hotel to check in, I saw a lot of legends like Arn Anderson, Ted DiBiase, and Tommy Rich in the lobby talking to others and checking in. It was cool and convenient to stay in the same hotel as Wrestlecon. 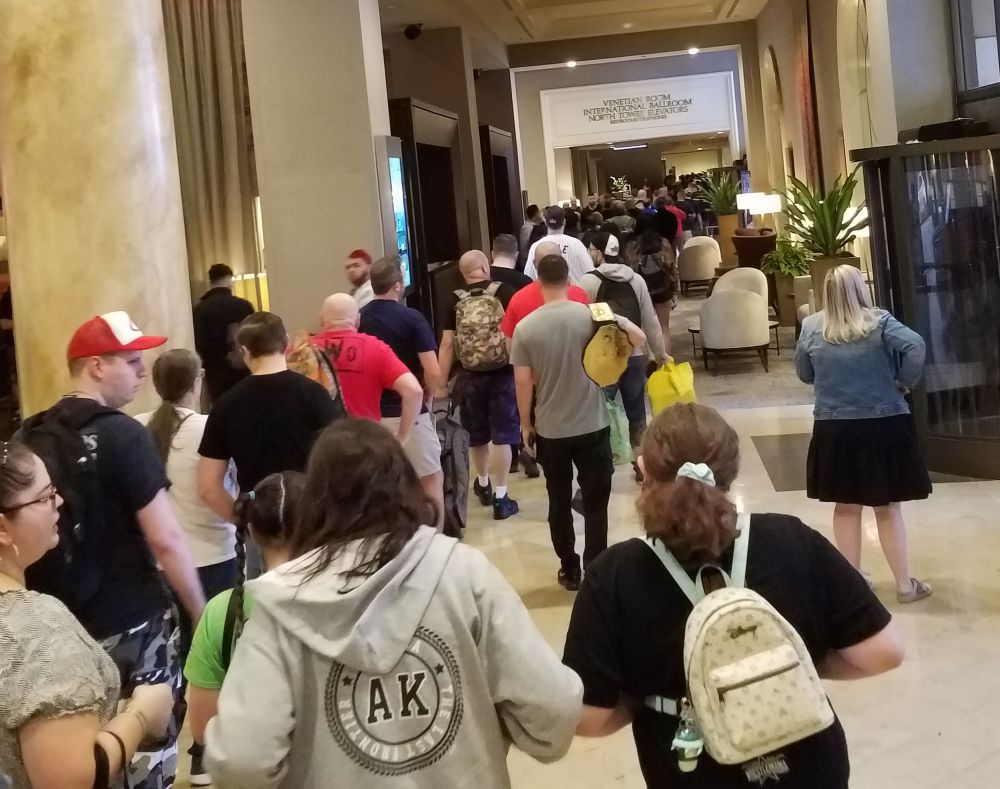 The first session was on Thursday, from 5-9 p.m. The place was packed with thousands of fans waiting to get photos and autographs of their favorite legend or current superstar. It was a little difficult finding the wrestler(s) that you wanted to see because there were no signs directing you. I guess if you really wanted to see someone, you would find them … eventually.

I got to meet Mike Rotunda, Jake Roberts, Tommy Rich and Sgt. Slaughter to name a few. At the same time, there was also a wrestling card going on with the AAA Lucha Libre promotion. I didn’t get to see much of the card due to getting photos and autographs, but I did see the last match featuring Sam Adonis versus Pyscho Clown. It was a great match and ended with Jeff Jarrett and Karen Jarrett coming out and jumping Pyscho Clown with Sam Adonis. 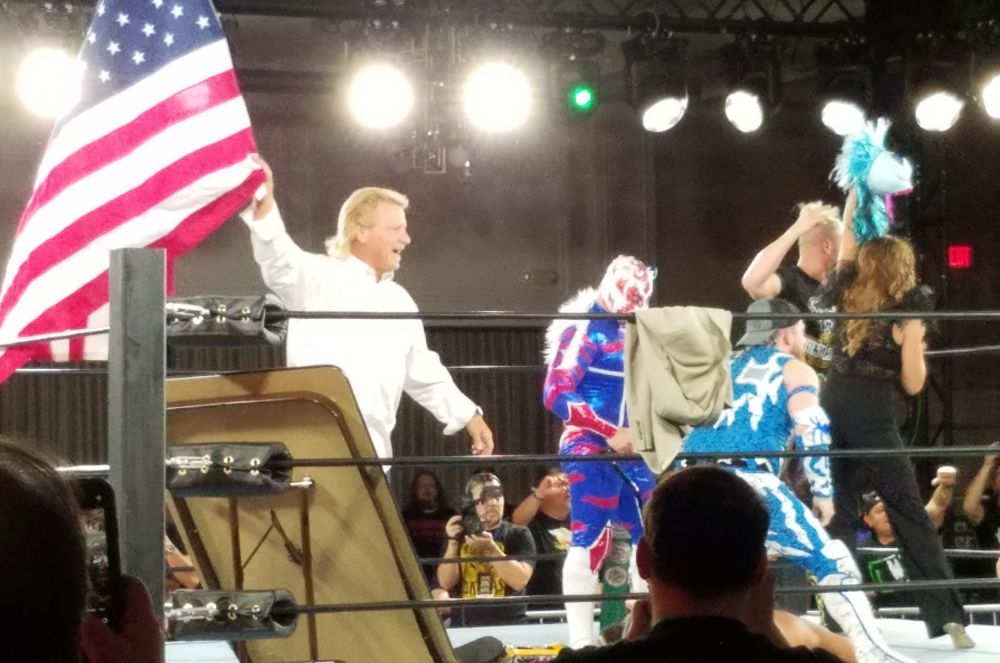 Jeff Jarrett waves the American flag after inserting himself into a match at Wrestlecon, which ran March 31-April 2, 2022, in Dallas, at the Fairmont.

The second session was on Friday. It was for Superfans only from 9 a.m. until noon. There were quite a few Superfans in attendance. “The Nature Boy” Ric Flair was three hours late, and thank goodness I was one of the first ones in line waiting, because the line looked like a mile long.

Bret Hart was not able to get to session 2 as scheduled because he was filming an interview for WWE. 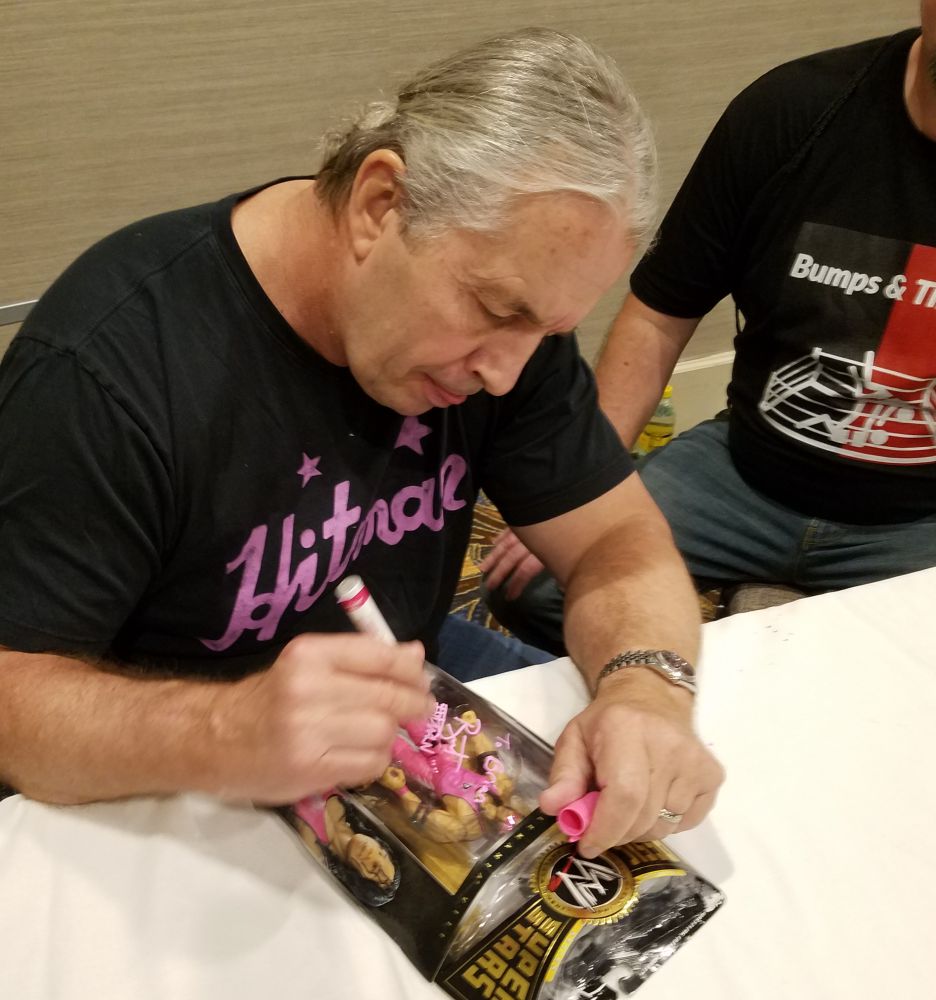 Bret Hart signs a figure for Brian Ferguson at Wrestlecon, which ran March 31-April 2, 2022, in Dallas, at the Fairmont.

Wrestling fans are really good people to hold your spot in line if you want to go and get other autographs. A fan held my place in line for Flair and I was able to go and get photos and autographs from legends like the Rock N Roll Express, Tully Blanchard and JJ Dillion, Arn Anderson, Demolition (Ax and Smash) and others. Flair finally showed up at noon and signed during session 3. 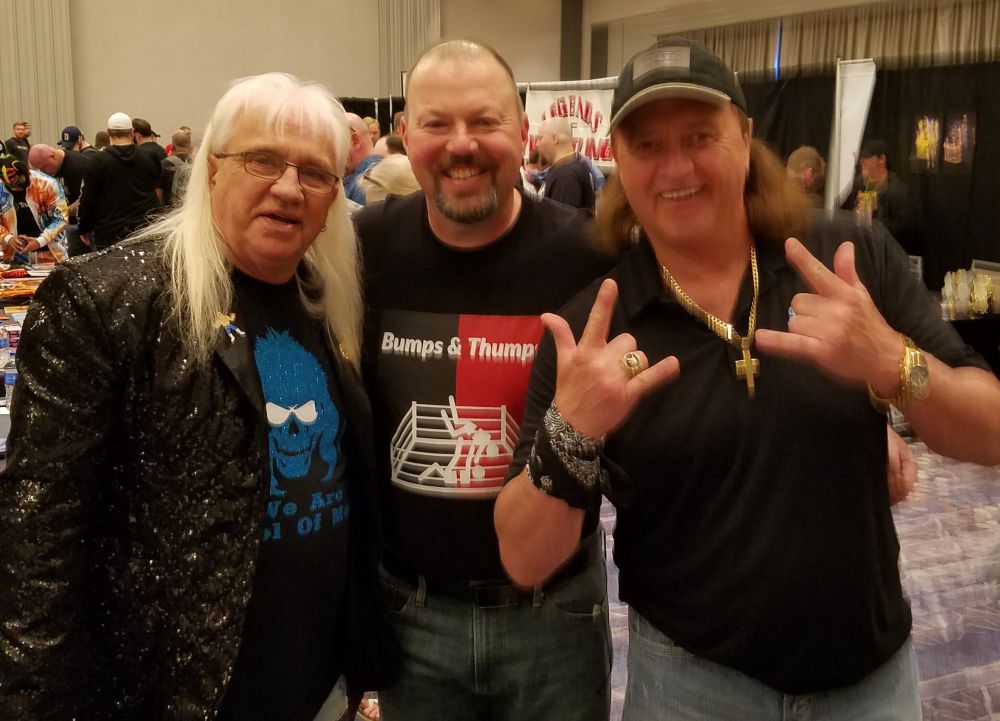 The Rock’n’Roll Express, Ricky Morton and Robert Gibson with Brian Ferguson at Wrestlecon, which ran March 31-April 2, 2022, in Dallas, at the Fairmont.

The third session was on Friday afternoon and added some more stars to the event. Nick Aldis, Mickie James, Diamond Dallas Page, Kurt Angle Mark Henry, Paul Wight, the Steiner Brothers and Bret Hart, and even broadcaster Dave LaGreca were there. The lines were long but fans were patient. I also will say that Paul Wight and Bret Hart would talk with you and not worry about upsetting people, which was nice. There was a wrestling card going on called Ziggy Dice’s “Trouble in Paradise.” Unfortunately, I did not attend this card either because of the long lines to get the autographs I wanted.

The fourth and final session was on Saturday, from 9 a.m. until 1 p.m., also known as WrestleMania Day 1. This was the biggest crowd by far. Jeff Hardy was the highlight of this session. Jeff was very nice and talked to you for a moment. The lines were very long for most of the wrestlers and well-known stars. Up and coming stars like Lady Frost, Rachel Ellering, Johnny Gargano and others were getting noticed by fans and the interaction was awesome. 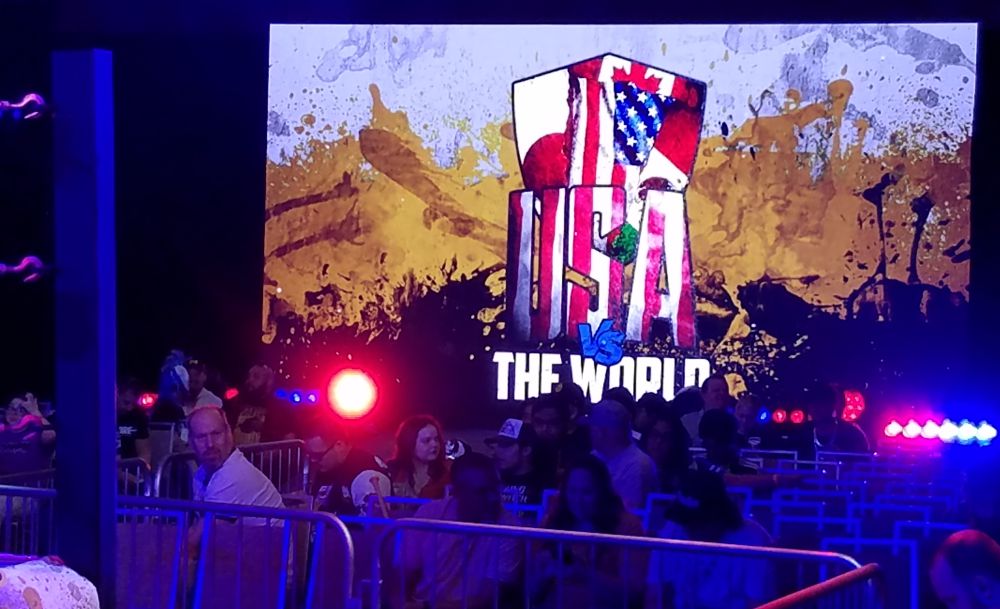 This time, I actually got to attend the last wrestling card which was called USA vs The World and was able to meet ROH founder Cary Silkin. The matches were the best-of-seven series of USA wrestlers against international wrestlers. Most of the international wrestlers were from Mexico or Canada. The first six matches were split and it came down to the seventh and final match Rich Swann versus Michael Oku. It was a great match with a lot of high flying action. Michael Oku defeated Rich Swann, so the World are the winners of the card.

Overall, Wrestlecon was worth me driving eight hours, staying at Fairmont for two nights and paying a little too much for a photo and autograph. Being able to meet, talk with and take pictures with legends, today’s superstars and tomorrow’s up and coming stars was a real treat for me. Though there were other pro wrestling events going on at the same time — namely WrestleMania and Ring of Honor Supercard of Honor, neither of which I attended — Wrestlecon was a great event for me and worth the time and money spent.

Brian Ferguson is the host of the Bumps & Thumps: The Talk of Wrestling podcast, which is available at this link.