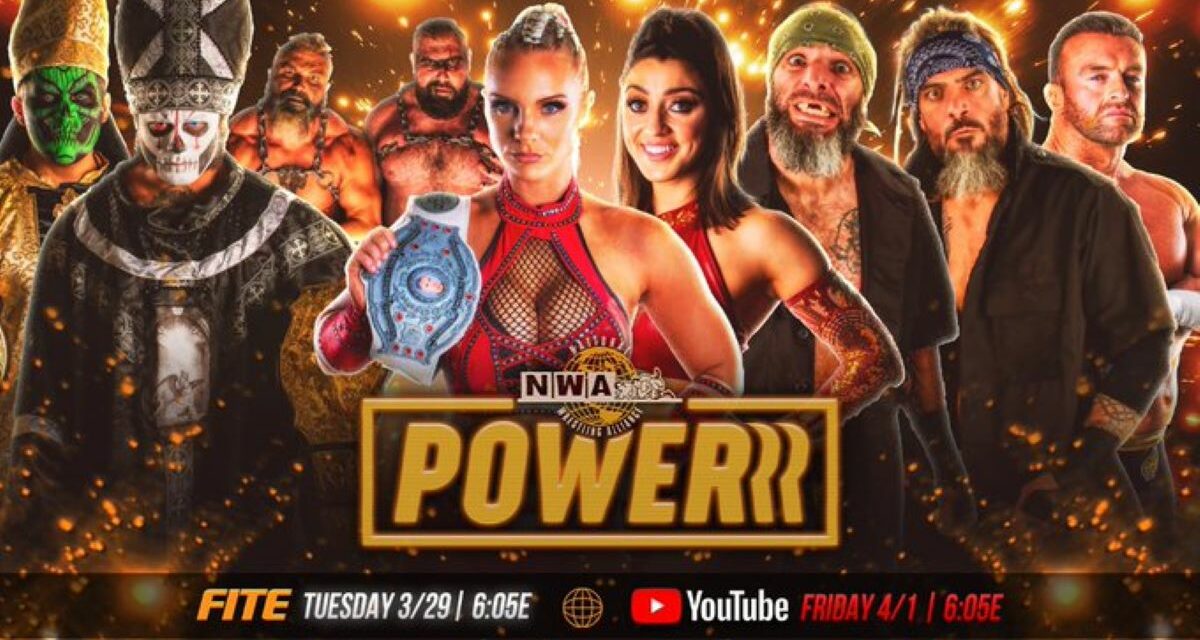 It’s another night to switch on to the POWERRR of the National Wrestling Alliance, and this show is jam-packed with matches, chief among them is a tag team title match between La Rebelion and The End, and Parrow and OdinSon want to avenge their early exit from the Crockett Cup Pay-per-view.  With that and lot more action by the wrestlers of the NWA, let’s step Into The Fire.

The show goes to a cold open, as Kyle Davis talks to the holder of the Ten Pounds of Gold, Matt Cardona.  He reminds us that he’s still the champ, and that almost wasn’t the case because people kept interfering during his match with Nick Aldis, like Tim Storm who got involved when he threw him back in the ring. Cardona sneers and offers “the old man” a shot at the belt, and emphasizes once it’s done, he will still be the real world champion.

Heated remarks to start the show, as we head to the Skyway Studios in Nashville, TN.  Joe Galli, Velvet Sky, and Tim Storm have the call, and Galli addresses the remarks to his broadcast partner that Cardona just made. Storm accepts the challenge, and pointedly tells Cardona that this “old man will kick his ass.”

I knew teachers that would have that same type of anger, and have learned over the years to duck and cover once they were in a foul mood.  Granted, those teachers were nuns in a Catholic school in Utah, but the basic tenet prevails here.

But let’s head to the First Match of the night, and it is a non-title match between… 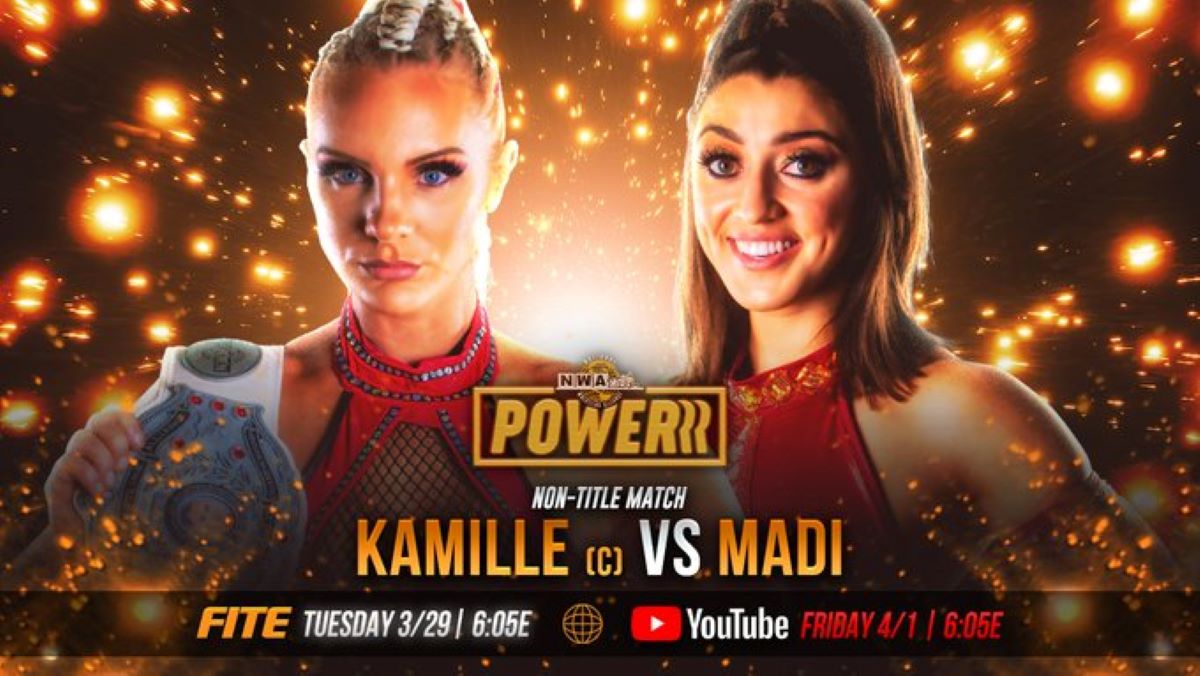 So the artist formerly known as “Wrenkowski” is no more, eh?  All righty, then.

Also interesting is the fans in the Studios giving a standing applause for the Brickhouse, including some dude dressed head to toe in a green suit (which should be the most distracting thing in the world, but to me, call it par for the course).

Madi starts off playing head games with Kamille, and that lasts for a minute before she starts using her physicality.  But Madi has some moves, as she uses the ropes to stun Kamille for separation, and gets single-arm DDT to cover for a two count.  Madi focuses her offense on the injured wing of Kamille, aggravating it further. Madi gets Kamille in a dragon sleeper while extending the bad arm at a painful angle, but Kamille powers up, and one back suplex stops Madi’s momentum.  She rams Madi’s head to the corner turnbuckle and then hits a spinning neckbreaker to cover for a two count.  Madi comes back with knee strikes and delivers the Reality Check finisher to cover again for a close two count.  From there it’s academic as Kamille nails the spear, and so long Madi.  Thanks for playing.

Afterward, Thom Latimer comes to the ring to congratulate Kamille on the win to the delight of the fans.

We go to a recap of last week’s NWA USA but just head here to check out what you missed.

May Valentine is backstage with Da Pope, and she queries about the upcoming title shot he earned from The Champion Series, and what happened at Crockett Cup. Pope notes to Cardona that “Heavy is the head of he who wears the crown.” But soon, he promises that crown will be lifted. Valentine also asked about Trevor Murdoch’s meltdown, and his comments after his beat down on his opponent last week. Pope sympathizes but will say to him not to forget where he comes from and who stands with him.

Now let’s get to some magic with…

Among the best line of the night is Davis introducing Dumas as hailing from “Madame Gertrude’s House for Boys.”   Of course, this prompts the pun by Galli that Dumas needs to pull a rabbit out of his hat (groan), and not even Houdini can escape this match with the Redd Dogg.  Dumas lights up a cigarette and blows smoke in his face, but then Mack grabs the cancer stick and then puts it out on his tongue.

Yo, that’s when I would put on a disappearing act.

Instead, Dumas tries to rake his eyes and chop away at Mack, but…nah, man; that ain’t happening.  One back drop later, Dumas rolls out and walks away trying to disappear.  But the Redd Dogg is on the hunt.  Dumas tries to rake his eyes again on the outside of the ring, but Mack rams him to the steel steps and the ring posts.  Back in the ring, Dumas breaks up another cigarette, and grabs his top hat.  The ref takes it away, and while he is distracted Dumas blows tobacco in Mack’s eyes for a roll up, grabbing his tights, and manages an amazing magic feat:  winning against the Redd Dogg.

Dumas high tails it out of the ring, as he successfully disappears before Mack could get his hands on him.

And now for something to anger Velvet Sky, your next match is…

The Ill-Begotten vs. The Cardonas (Mike Knox and VSK)

Jeremiah Plunkett, Alex Taylor, and Rush Freeman are deciding amongst themselves which team will get in the ring, utilizing “The Freebirds” rule.  Well, VSK throws out Taylor to help make that decision for them, and The Cardonas isolate the Tater Peeler Titan for most of the match, as he becomes your Plunkett in Peril.  At one point, VSK is in the ring and attempts a knee drop but Plunkett rolls out of the way.  A hot tag to his Ill-Begotten partner, and we have a Rush Freeman en Fuego, taking the fight to The Cardonas.  Freeman hits the ropes, but VSK nails a kick to his back, and Knox takes advantage with his running crossbody.  It’s all ill-tidings for The Ill-Begotten and Knox and VSK deliver their reverse spinning neckbreaker/frog splash combo for the win.

Your Winner via Pinfall:  The Cardonas

After the match, Sky went on a complete rant at how anyone associated with Matt Cardona is the complete antithesis of what The NWA stands for.  Hyperbole aside, she ain’t wrong.

Kyle Davis is backstage with Chris Adonis, and asks the former Strictly Business member of the breakup of the stable. Adonis notes that some guys are better in the band, some are a solo act, and he is clearly the latter. Davis asks what he wants to do moving forward, and Adonis mentions that he’s won the NWA National title twice, and that looked good around his waist.  Maybe he should see about going for the title for a third time.

I was wondering if he would step back in the National picture.  Expect more Adonis sightings on NWA USA in the future.

May Valentine is now with Cyon backstage. The masked wrestler says that defeat can teach someone two things:  acceptance and move on, or use it as motivation. He managed to lift Tyrus and throw him into a table, but still, he kicked out. That taught him how to use that moment as motivation in defeat. As for Tyrus’ body slam challenge, he accepts that will get him one step closer to a rematch for the NWA Television title.

At that point, Taryn Terrell barges in like an excited labradoodle.  She tells Valentine she is so annoyed Jennacide left, but good riddance. But what about Paola Blaze, Valentine asks?  Ummmmmm…she was going to the mall shopping, and she’s in a rush so bye girlfriend.

And now for something different, it’s time for…

Must be time for dinner, because this match has “Squash” written all over it.  So in honor of “The National Treasure”, enjoy this curried squash tartlet with apple and chicory salad from Great British Chefs.

As for the match, Aldis didn’t break a sweat, getting Marshall in a Tombstone piledriver to the Kingslayer cloverleaf, and Marshall taps out.

Aldis goes to Podium looking focused. He tell Kyle Davis and the fans at ringside that Cardona and he have unfinished business, and this will not conclude until he is the champ once again, and Cardona is in a hospital bed.  Like the match, that promo was short and to the point.

There’s a video package of The Crockett Cup between The End and La Rebelion, but you should read here what happened if you haven’t caught up on the double PPV event.

Back to commentary, and Joe Galli is with Dem Boys, The Briscoe Brothers.  Mark and Jay Briscoe are here to scout out the tag team champs, and you bets believe broadcast commentary is gonna get interesting.  So let’s go to the Main event, and it is for the… 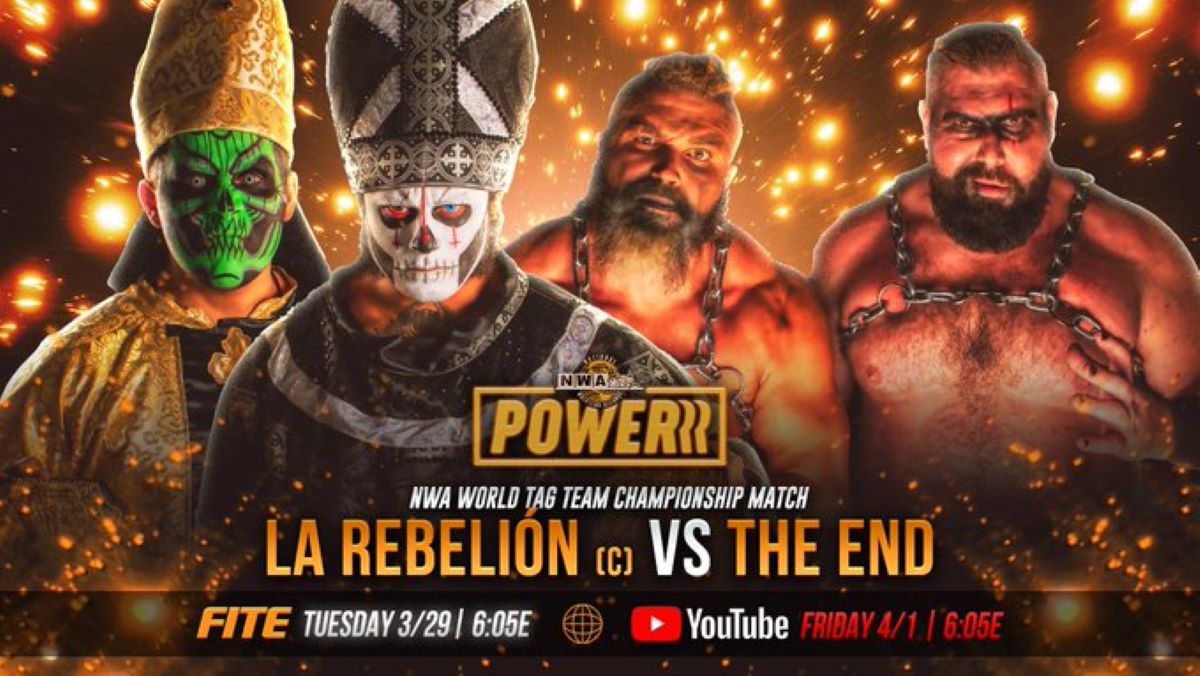 As soon as Davis introduces the champs, The End jump Bestia and ‘Wolf, and it’s a Pier Four brawl.  OdinSon stacks up La Rebelion and gets Parrow in the fireman’s carry for the patented Senton Bomb. Now the bell rings, and Parrow covers Bestia for a two count.  On commentary, Mark quips that “We got a lot of beef in the ring,” before concluding that’s just “more meat to chop.”  Might be a welcome break from their chicken farm, but I digress.

The majority of the match has The End keeping Bestia isolated from his tag partner, thus making him un Rebelion en Peligro.  OdinSon sets Bestia on the top turnbuckle, and hits a European uppercut and while standing gives the Tijuana Gremlin an overhead suplex to cover for a two count.  Parrow dumps Bestia to the outside of the ring, but not enough to stop the Rebelion member.  He comes back in the ring and now gets the hot tag to Mecha, who is a ‘Wolf En Fuego.  A superkick to Parrow, and ‘Wolf launches Bestia with an overhead suplex to a cannonball splash in the corner.  La Rebelion grabs OdinSon with a double-team maneuver to a pin, but Parrow breaks the count.  La Rebelion sends OdinSon to the corner, but he fights out with European uppercuts.  A tag to Parrow and OdinSon sets up another senton bomb but Bestia kicks out his legs for Parrow to land on his partner.  Parrow sends Bestia out and sets ‘Wolf on the top turnbuckle for a high-risk maneuver.  He bites and kicks Parrow down to the mat, and he’s in prime position to deliver his 450 splash, and he covers the big man for one, two, and three!

After the match, MechaWolf and Bestia eyeball Dem Boys, and The Briscoes take a little umbrage.  As the champs walk away, Mark says to Galli that as of now The Briscoes collecting gold, and those belts are high on their list.  When they’ll cash in is another subject, as the show goes to credits.

A lot more matches in this episode.  Nothing that stands out, but overall it was a truly solid show of wrestling.  More focus was put on the tag titles, and The Briscoes were a good fit for commentary.

I still don’t understand Terrell’s presence, but if someone is enjoying it…ok, then.

Until next episode, see you in seven!