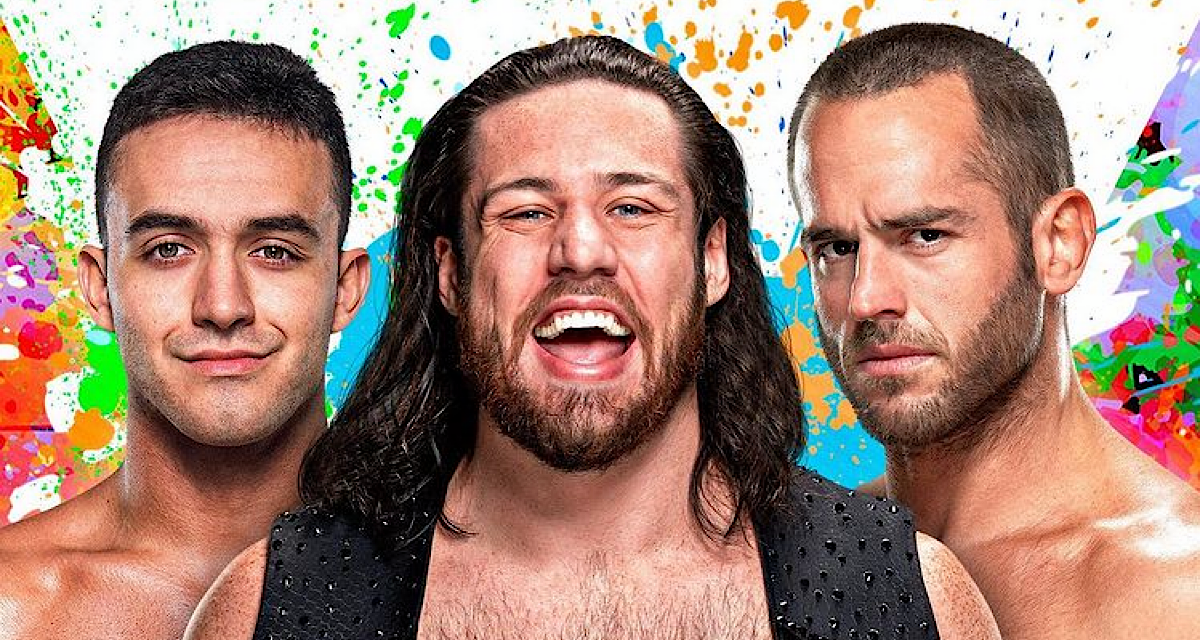 On the go-home show to NXT Stand & Deliver, Cameron Grimes earned a spot in the North American Championship multi-man ladder match, one of many marquee matches on Saturday’s card. Taking place the afternoon of WrestleMania Night One, the NXT 2.0 crew is aiming to show the wrestling world its worth, and tonight was a promising precursor.

Imperium vs LA Knight and MSK

A brilliant camera angle opens tonight’s episode as Gunther’s silhouette is dropped by the opposition’s blindside attack. Knight’s team retains control until Gunther’s meaty paws take the former down, but MSK eventually makes the comeback. It took months of the shaman series for Orlando to accept MSK, but Nash Carter is back to being booed for another reason. A big boot from Gunther inadvertently gets a warm pop preceding picture-in-picture, and “The Ring General” dominates throughout. Knight, now arguably the most popular wrestler in NXT, makes the second comeback before brawling away with Gunther. But Fabian Aichner turns Carter “inside out” with a brutal lariat for the pinfall victory. The Creed Brothers appear in the entranceway before the three tag teams battle at Stand & Deliver for the NXT Tag Team Championships.

The winners of the 2022 Women’s Dusty Rhodes Tag Team Classic tournament, Kay Lee Ray and Io Shirai, attempt to explain why they exchanged their NXT Women’s Tag Team Championship match for a fatal four way Women’s Championship match instead. “May the best woman win,” they reluctantly say in a promo package.

Rookie Stratton is a natural performer, and Nile is technically gifted; they coincidentally have what the opposition lacks. Before the bout concludes, Sarray appears from the smoke machine, distracting Stratton and giving Nile the submission victory with a Dragon Sleeper. Overproduced goofiness hinders the matchup, parallel to NXT 2.0 in general.

A signature garage door promo from Tommaso Ciampa recaps his NXT career: “Every obstacle, every triumph, every tragedy — you were my constant… Together, we created black-and-gold magic,” says Ciampa. 9/9/2015 and 4/2/22 is painted onto his chair, symbolizing the end of an era for NXT.

A documentary-like segment of NXT Champion Dolph Ziggler reminds people of the superstar career he’s had — it’s easy to forget. “Yes, I’m bitter,” he says about starting as Kerwin White’s caddy and the Spirit Squad’s Nicky instead of being nurtured in an environment like NXT as Bron Breakker currently has.

Somehow less empowering than the previous segment is Cora Jade’s dream story. Her unpersuasive delivery speaks on the Stand & Deliver fatal four way Women’s Champion match, where her dreams will finally come true — or something of that nature.

Commentary is hyperfocused on Jensen’s hapless love life as good lucha things are enacted in-ring. An underrated team is LDF, but the Orlando faithful always love them. Big Briggs makes the comeback before Elektra Lopez on the outside provides distraction, but Fallon Henley takes her out. Briggs catches Joaquin Wilde’s 450 with a chokeslam, and the double-team lariat gives his duo the pinfall victory.

Indi Hartwell and Persia Pirotta are still arguing over their respective couples. “See you in Dallas,” Pirotta says after proposing a fan vote.

Another anxious millennial cowboy in Cameron Grimes is worried about his chances in tonight’s triple threat during a backstage interview.

Carmelo Hayes and Trick Williams are interrupted by Grayson Waller and Sanga. “Mine is bigger than yours,” Wallers says, referring to each other’s heavies of course.

NXT’s jointly number one announcers Kushida and Ikemen Jiro are broadcasting ringside as Sofia Cromwell appears in the crowd. “If I had a mogul like Robert Stone in the early days of my career, Nexus would still be running RAW and Smackdown,” says commentator Wade Barrett. Wagner eventually puts Hayward away and very unreasonably attacks Kushida and Jiro too, ripping apart the latter’s blazer.

In a grand package, Tony D’Angelo says that he’ll “control anything and everything when (he) becomes the new don of NXT.”

Upstart Quincy Elliot is watching ringside as Gacy dominates the match. It isn’t long before Gacy’s springboard lariat puts it away. Nothing much to write home about besides how intently Elliot was staring at Harland’s backside.

Everybody’s socials will once again be occupied by Lyons tonight. Her split-legged pin gets the victory: “Go ahead and send out your tweets,” says commentary. Lash Legend appears on screen, and makes the challenge for after Stand & Deliver. “You okay, but you’re not Lash Legend, okay?” she says.

Malcolm Bivens is backed by Diamond Mine and sends a message to NXT. He claims that Strong is headed to Stand and Deliver, and the Creed Brothers will capture the tag titles. “Malcolm Bivens will have more gold than Hall of Famer Mr. T himself. And I pity the fool who wants it with Biv Nasty!” Meanwhile, Brutus Creed receives a message from the mystery attackers, who will be watching on Saturday.

The winner of tonight’s main event becomes the final competitor in this Saturday’s multi-man ladder match for the North American Championship. “This is a ‘blink and you’ll miss it’ kind of affair” as commentary aptly describes it, with all three wrestlers displaying great speed and agility. Carmelo Hayes and Trick Williams join commentary, dripped out as per usual, as A-Kid impresses in-ring. After picture-in-picture, fellow ladder match competitors begin appearing around the building: Solo Sikoa, Santos Escobar, and Grayson Waller watch on as Grimes gets the upper hand. “The people are on their feet for Trick and Melo on commentary,” the duo comically says, but really, it’s a very exciting match. Strong catches A-Kid with a jumping knee and End of Heartache, but Grimes delivers the Cave In for the pinfall victory. The ladder match competitors enter the ring, and a multi-man brawl finishes the go-home show before NXT Stand & Deliver.

Very solid episode of NXT to head into Stand & Deliver on Saturday, which will truly be a showcase of what NXT 2.0 has to offer. The brand has the wrestlers, the production, and the tools to create great shows; and segments like tonight’s main event really prove it.