MLW Fusion: Killers, vampires, and a feud that goes up the Stairway to Hell 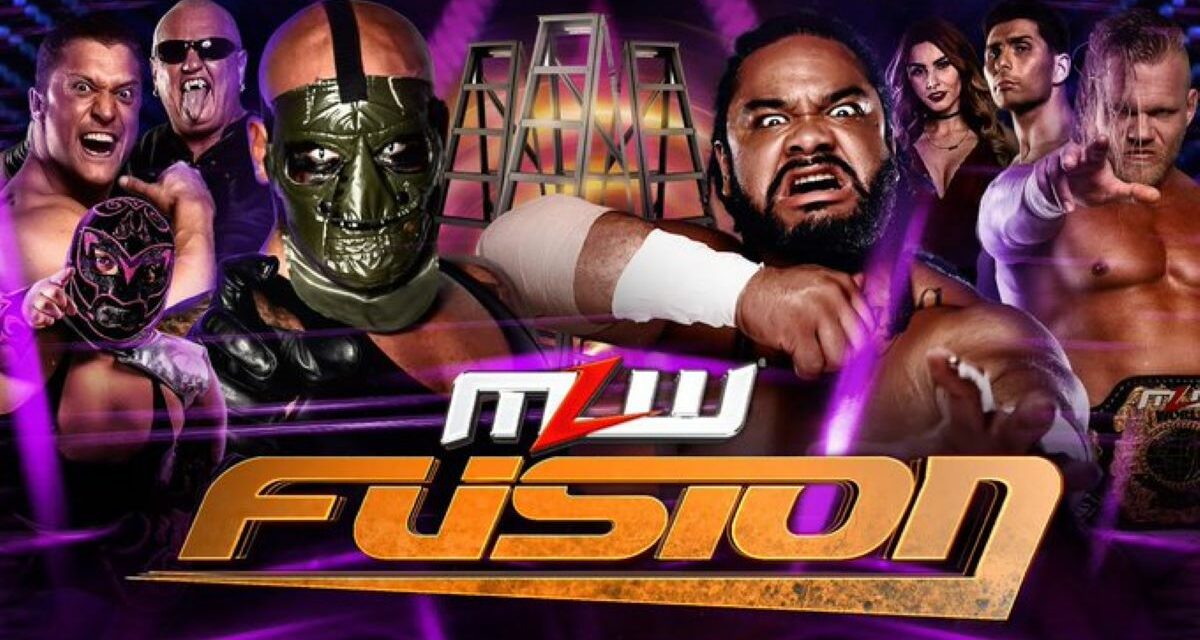 Major League Wrestling always promises action in the squared circle, and tonight is no different.  While we will see killers and vampires, the main event will see the civil war of Contra Unit get even bloodier, as Jacob Fatu and Mads Krügger continue their bitter feud in the Stairway to Hell match.

All this and more to come, as we go to the Grady Cole in Charlotte, NC. Rich Bocchini and Joe Dombrowski have the call, and as for your First Match of the night, we get….

Yes, Virginia…The People’s Executioner has returned, and the fans couldn’t be happier, as Kross is returning to his roots of violence, as he leaves the carrion behind to rot.

(Author’s Note:  Again, I normally don’t recap squash matches, but this another exception.  So my exceptions to-date are:  when I talk up any wrestlers from my home state of Utah, and when I really want to enjoy some gold old fashioned schadenfreude.  This would be the latter.)

Fans are chanting “Kross is gonna kill you”, and Heavy is no doubt dropping something heavy in his shorts. Kross gets to the center of the ring, and offers him two shots to his face. Heavy swings, and Kross says that’s strike one. Again, he tries, and well…enjoy the schadenfreude.  I know I will.

Kross goes to work with a big boot and a sick looking Doomsday Saito suplex that dumps Heavy on his head, and then a discus forearm to the back, with heavy blows to the bloated carcass that is Budd Heavy, and gods damned his time was up.

As the fans chant, “Wel-come back!  Wel-come back!” Kross goes to leave.  But the fans chant “One more time!  One More Time!”  Never one to turn down an encore, Kross picks up Heavy and delivers another Doomsday Saito, and now he’s done.

The Von Erichs catch up with Ricky Morton and his son, Kerry Morton. Marshall is hobbled up still after the attack by 5150, but Morton reminisces about the time he and Robert Gibson had matches down here, and if only the walls could talk.  The Morton’s offer the brothers to get them some street tacos, and who doesn’t love tacos, huh?

Holliday walks by, proud as a peacock, since tonight he believes that Hammerstone won’t show up, and the MLW Heavyweight title will be forfeit.  He runs into St. Laurent, who offers an endorsement opportunity, but Holliday is on a schedule and goes to the back where the Azteca Stooge ™ is on guard at Cesar Duran’s office.

(That leads to ads, but this time, I’m not irritated by it, because…)

We come back from the break and Holliday comes to the ring, but Your Boy Hammer is in the building.  He jumps Holliday from behind, rips his jacket, and the shoves the Stooge ™ out of the arena, as Holliday runs for his life.

.@MostMarketable was making his way out to the ring but @alexhammerstone comes from behind to get some revenge on his former dynastic "brother".#MLWFusion pic.twitter.com/2ZAKHOeU0J

Since the Morton’s were talking tacos, let’s head to Los Parks Cocina, as they entice the fans to come down, as theirs is the best food anywhere. However, unsatisfied customer Emilio Sparks says that the food is no good, and Parks offer satisfaction…by shoving the food down his throat.

Yeah, any of you guys wanna send a bad Yelp! review to them, I say “good luck!”

Speaking of meaty offerings, Gnarls Garvin gets in the ring with a mic and says he’s the best fighter in the South. He came to MLW with the promise of real fights, and he keeps getting pansies. He calls out anyone in the back to the ring that wants someone to hang with “The Beef-ster (and I never thought I would type that as a sentence, but here we are!).

Also on the subject of things I never thought I would cover, we get…

The last time I saw Gangrel was on the Dark Side special featuring Luna Vachon, so this is cool to see him in this match.  No billowy shirts or golden chalices of red liquid, notes Bocchini, but a focused vampire with a sickle.  Just like you don’t throw rocks at a man who has a machine gun, you never fight a man that bring farming implements to a wrestling match.

The match is No-DQ match, as the Vampire Warrior turns “Big Beef” to tenderized ground chuck.  Garvin tries for a crossbody and, Gangrel pulls down the ropes, as Big Beef dives to the outside of ring the hard way.  Gangrel goes in pursuit, and Garvin comes back with a clothesline that knocks him flat on the concrete floor.  He sends Gangrel back in the ring, and goes up top for a high risk maneuver.  Garvin goes for a splash, but Gangrel rolls away. He connects with the Impaler DDT, and goodbye and good night, Garvin.

Your Winner via Pinfall:  Gangrel

Cesar Duran is in his office, when TJP and EJ Nduka come in. I’d love to tell you what was said; I really do.  But for whatever reason the audio on Duran was impossible to hear.  It was like me trying to decipher a Mads Krügger promo.

(Author’s Rant:  While I get that at points MLW is trying to reproduce the magic that was “Lucha Underground”, and gods bless them for trying, I wish that same effort went into the budget for these types of cinematic vignettes.  Because stuff like this wouldn’t fly in the indy-est of indies; and I should know, I’m been at some Twitch tapings that had better production values.)

Long story long, The Judge wants Duran to do something done on 5150, and challenges them for a tag match which will be next week.  Not sure what happened to TJP, but Duran got some note and walked past the wrestlers, so…yeah.

Holliday is still running, and St. Laurent stops him to get him for an endorsement.  That’s enough time for Hammerstone to catch up, and he now rips off his shirt.

(Gee, I wonder what’ll happen later in the show?)

Savio Vega sneaks into Duran’s office, and knocks on a suitcase that has…Micro Man.  Apparently the little luchador has been spying on behalf of Vega, and has some dirt.

James Bond, he ain’t, but I’m sure Micro Man measures up at .007 milimeters.

But let’s gets to the Main Event, as this match will be a…

The weapons suspended above the ring are a “Maililu cane” (read: kendo stick wrapped in barbed wire) and a “Baklei war club.”  Basically, it’s your hardcore match, and pinfalls still count.

Krügger gets in the ring first, and s Fatu goes to ringside, The Black Hand immediately dives onto the Samoan Werewolf.  Fatu goes a ladder and gets a ladder, but Krügger dives onto the ladder and his opponent outside the ring.  He goes back in the ring, sets up a ladder and goes for his war club, but Fatu dumps him off ladder, and nails with a Samoan Drop.  Fatu rams him in the corner, slams Krügger to the center of the mat and slams a ladder on him.  Fatu then follows with a slingshot Moonsault onto the ladder, and it looks like he got the worst of that offensive move.

Krügger gets back to his feet, goes to the ladder and climbs up and now grabs the club, but Fatu slaps the taste out of his mouth, and sends the club flying.

Fatu goes for his cane, and Krügger sends him crashing down.  Now the Black Hand has a steel chair, and brings it down across the back of Fatu.  He sends Fatu to the corner, but the Samoan Werewolf reverses and Krügger is send flying to the ladder, and goes to the outside of the ring.  Fatu goes back to get the cane, but Krügger is there to greet him at the top of the ladder.  A series of head-butts sends him crashing, and now Fatu gets the cane free, and cracks Krügger on his melon head and that leads to…

Ads (Ugh!  In the middle of a hardcore match?!  I now want to get the war club to bludgeon production for this!)

We come back to the action, and Fatu lands a running hip attack to Krügger.  As he is crumpled in the corner, Fatu places a chair on his face, and then goes to the other side of the ring with another steel chair, goes up top, and nails a Van Terminator (which I will dub the “Van Fatu-minator”).

Fatu gets the pin cover, but only gets a two count.  Back to the cane, and the beatings keep a-coming, and Krügger is bleeding from top of his head.  Business picks up as Fatu gets a table to the bloodthirsty fans’ delight (buncha sickos in Charlotte, I tells ya!).  He sets it up, but Krügger goes for a chokeslam, but Fatu superkicks his way out, Fatu goes to the ladder top, and Krügger follows close by, as both men slug it out, but the Black Hand wins this one-upmanship and one superplex to the table that explodes under their weight earns “Holy S***!” and “This Is Awe-some!” chants, and rightfully so.

Fatu gets back to his feet, and goes for the signature swinging uranage and covers for a two count.  As he gets ready for his next offensive move, Fatu’s attention turns to Ikuro Kwon at ringside, who gets the war club to Krügger.  He clocks Fatu, and one full nelson facebuster puts him down for one, two, and three!

Krügger is on the mic, and says…honestly I couldn’t understand one bloody word, but the gist is he’s the leader of Contra, I guess, so “Hail Contra!”  But Fatu has a rebuttal in the form of a steel chair, and staff and security tries to break up the chaos that ensues, so this is far from over.

We go backstage, as Hammerstone catches up to Richard Holliday, and he tears away the pants.

(Huh!  He’s a boxer briefs kinda guy.  Go figure), and he dashes off in his skivvies to the limo outside, as Alicia Atout gets her man in, and the car dashes off with Hammer still running after it  as the show fades to black

Two things:  If anyone can get me to care about a squash match, it’s Killer Kross in a convincing Debut.  Gangrel hasn’t lost a step, and Fatu/Krügger closed the show strong with the hardcore match.

I would’ve rated this higher, but the vignettes did nothing for me at points, and this is a case where “less is more”; specifically, less vignettes, more wrestling.

But, next week should prove to be a good one in tag team action, so we’ll see you in seven!