‘Odd in a beautiful kind of way’: Luna Vachon’s life presented on ‘Dark Side of the Ring’ 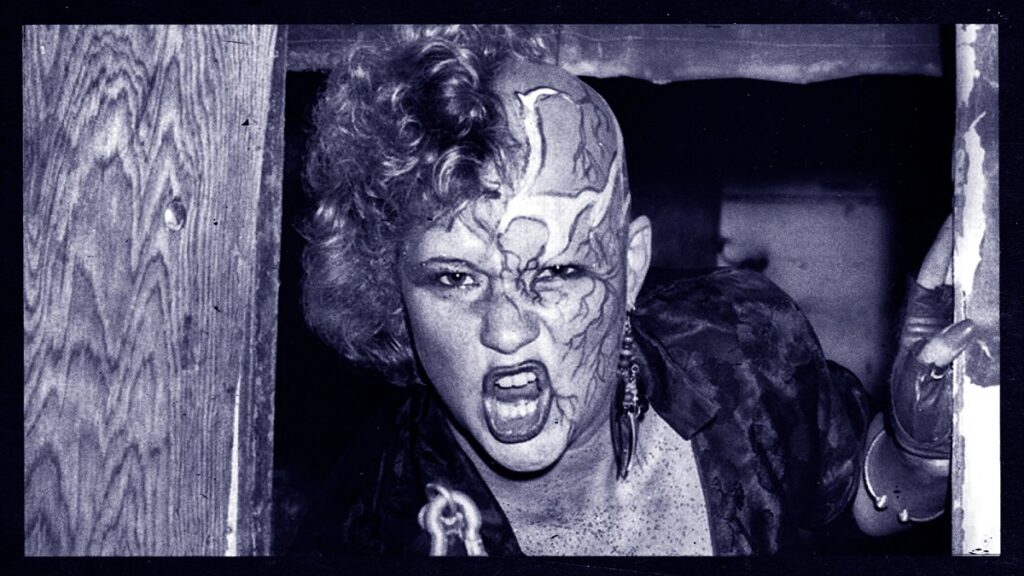 There’s a perfect opening for this week’s Dark Side of the Ring episode features Luna Vachon: her menacing and manic appearance accompanied by her growling voice lets viewers know (and reminds those that already do) that they’re about to dive into the life story of a truly unique wrestler’s story. This is no valet, no diva, and maybe not like anything else to have graced the wrestling world. What follows, though, is the troubled tale of Gertrude Vachon, who seemed to lose as much to the business as she gained from it.

The episode, titled “The Many Faces of Luna Vachon”, presents a wide array of people who knew and loved Vachon, although they were all sympathetic voices and the one thing the episode could have benefitted from was an opposing viewpoint on certain events. The most personal stories are told, unsurprisingly, by David Heath (better known as Gangrel), married to Vachon for twelve years, and from Van Hurd, one of her children from an earlier marriage.

Hurd, who has his own slice of notoriety from competing on TV’s Hell’s Kitchen, has a terrific presence on screen. He seems affable, honest, and very matter-of-fact in discussing his mother’s strengths and weaknesses. He shares amusing stories such as Vachon visiting him in class with a snake (which almost bit him as she leaned in for a hug) while acknowledging he couldn’t always separate her wrestling persona from her real life identity. In fact, he suggests there really wasn’t much of a difference, save for her shyness when fully removed from the wrestling world.

The show details a little history about Vachon’s adopted family: her uncle Maurice, Aunt Vivian, and her father Paul. Paul appears briefly in the episode a couple of times, and the Canadian wrestling icon tells of how he was wrestling in Georgia when the owner of the motel he was staying at committed suicide. He eventually married the widow and thus became young Gertrude’s step-father. Gertrude was enamoured with her new aunt Vivian and sought to follow her footsteps into wrestling.

Heath does more than just hint at troubling allegations against Vivian and abuse that she brought upon Gertrude – which Paul refuses to believe. In either case, with the young Vachon then enlisting in The Fabulous Moolah’s wrestling school, which was the only real pathway to women’s wrestling at the time but has its own troubled history with allegations of Moolah sending her young protégés out on sexual loan, Luna Vachon was robbed of what would be called a normal upbringing.

She finds her entry through Florida Championship Wrestling, aligning herself with Kevin Sullivan and exploring the lunacy that his devil-worshipping stable engaged in. She buys into the lifestyle and finds her way into alcohol and drugs, marrying and divorcing many times over and choosing life on the road over settling down, even after birthing two boys in a marriage to Dan Hurd. The show explores further challenges in her bipolar disorder and schizophrenia, but her commitment to wrestling pays off when she arrives in the WWF at WrestleMania IX.

Though Van Hurd remembers the feeling of seeing his mom on TV with Shawn Michaels (and the show gives a nod to Luna Vachon’s historic entry on the Acclaim video games WWF Raw as the first playable female wrestling character), Vachon found that the summit of working in the WWF did not fulfill her expectations. Madusa Miceli looks back on her friendship with Vachon, noting both had their frustration with the state of women’s wrestling at the time. Vachon was mostly managing/escorting (first Michaels, and then Bam Bam Bigelow) before the WWF got her into rehab and subsequently releasing her.

The show documents her arrival in ECW (where Mick Foley says she was embraced by the fans) and her return to the WWF on two occasions before she is released for the last time, fed up with the continued poor state of women’s wrestling (in particular, feeling that her efforts of building up Sable, an inferior wrestling talent, was unappreciated). Her return home to heavy use of drugs and alcohol drove her and Heath apart.

It was Mick Foley who uttered the words in the headline above, and his use of the word “Odd” did not feel dismissive or belittling. It’s a fitting tribute to a woman who, to a person in this episode, could frighten someone as easily as she could show loving care towards them. It’s Van, though, who really is the linchpin of the episode, and he perfectly sums up how he looks past controversy or doubt about how his mother lived and ultimately how she died. “She’s not here anymore, that sucks,” he says. “I don’t really care how she died”.

For Van and for those who loved and were loved by Luna Vachon, maybe the details didn’t matter. Maybe they were just happy to have been on the ride.