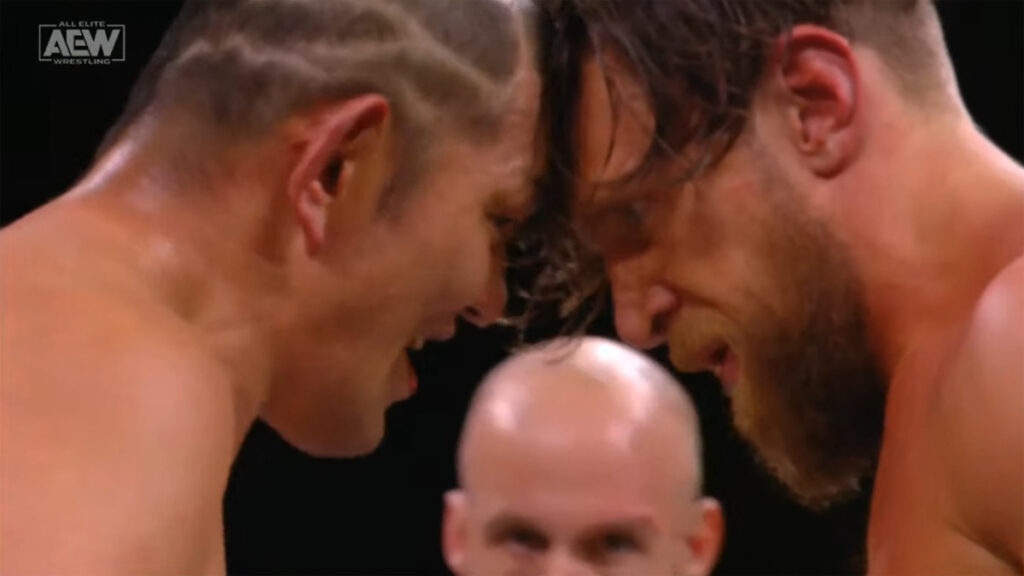 Minoru Suzuki versus Bryan Danielson. That was all that really needed to be said. You knew it was going to be a classic and it was. The last time the two wrestling legends met was when Danielson was just 23-years-old.

“He beat the s–t out of me. Showed me what violence and sadism inside a wrestling ring looks like. Since then, I’ve learned a thing or two about violence myself. And sadism. Excited to show Mr. Suzuki what I’ve learned,” wrote Danielson before their phenomenal match on the Rampage Buy-In.

Suzuki brought Danielson down to his knees as they locked up.

As they countered each other hold for hold, the crowd shouted: “This is wrestling!”

Indeed it truly is.

An eternally pissed off Suzuki scowled and barked at the crowd for distracting him.

Danielson laid in his kicks. A sadistic Suzuki begged for more. Danielson kicked Suzuki back into a corner.

One forearm shot though knocked Danielson down hard to mat. The match spilled out to the floor where a knuckle arrow punch to the face had Danielson flat on his back counting ceiling tiles. Suzuki laughed as he paint-brushed Danielson who become furious throwing Suzuki onto the steel post. Danielson clobbered him with a running strike off the apron. 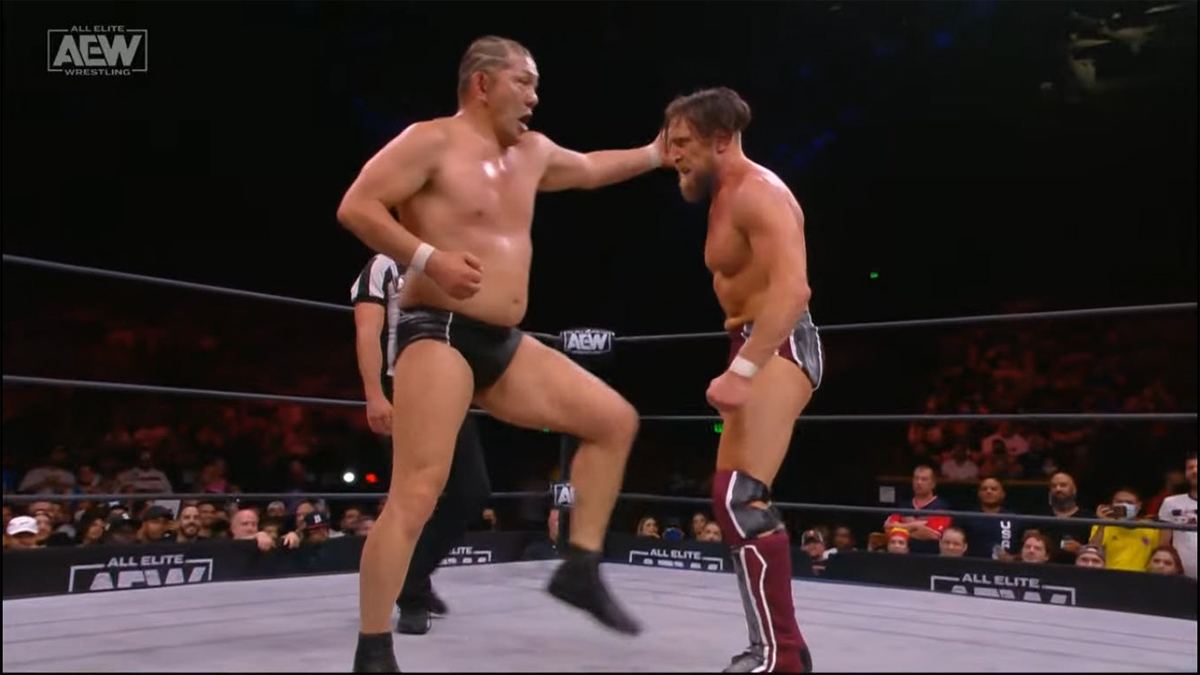 Back in the ring, Danielson just battered Suzuki with kicks. Suzuki smiled asking for more pain and punishment. It was then Suzuki’s turn to deliver some running kicks off the ropes. Danielson went down and sat back up after each one. Danielson scrambled to the ropes to escape the Fujiwara Armbar.

The official began to annoy Suzuki so he backed him up, adjusting his shirt collar as a warning before dishing out more pain to Danielson. It was Suzuki’s turn to pull off an escape and he did. He rolled up out of a LeBell Lock, almost doing a handstand into the ropes with his feet touching the second rope.

The match came to a head with Danielson and Suzuki trading shot after shot, traditional NJPW, Japanese strong style wrestling. Both lashed out simultaneously and both dropped head-first to the mat. Danielson backdropped out of the Gotch Piledriver to pin Suzuki with a running knee strike to end one of the very best matches of the year and Rampage’s best match in its short history.

For those who haven’t ever heard the full version here is Minoru Suzuki’s theme song Kaze Ni Nare by Ayumi Nakamura.

It is a solid back and forth until they stunned each other, both faceplanting on the canvass. Four pump kicks to the head sets up Garrett for Conti’s DDT. Come on, AEW. Sign Garrett already. She is talented, deserves a decent stage to show what she can really do.

So Moriarty comes to the ring wearing a mask, headphones and dancing like a twit? Ooookay. When he gets to the ring he takes his mask off? Not sure what the point of that was. It is a technical match until Fish unleashes a series of strikes which send Moriarty for a loop. Moriarty works over Fish’s arm until Fish just picks up Moriarty slamming him into a corner. Moriarty attempts to trade blows with Fish. Big mistake. Fish takes over with some vicious knee strikes, shots to the head and the body. An exploder suplex into the ropes and a kick to the head has Fish pinning Moriarty. AEW needs to push Fish as a shoot fighter, sorta like Ken Shamrock. He has the experience and the ability to become a massive star in AEW if handled properly.

A fan holds up a sign which reads: Punk Fears Hook. Funny that. Punk and Sydal shake hands before they clean each other’s clocks. Things take a turn for the worse when both men are fighting on the second rope and end up sending each other crashing to the arena floor. Tough landing for everyone. Sydal makes it to the ropes to force the break of the Anaconda Vice. Punk amazingly kicks out of the Lightning Spiral. Sydal tries for a crucifix but Punk reverses it into Go to Sleep. Hugs and handshakes all around after the match.

Ruby Soho vs. The Bunny

For some bizarre reason, Taz starts singing Ruby’s song getting the words all wrong and sounding like a dope. Someone should have cut his microphone. Bunny labels Soho with a running drop kicking into a turnbuckle. Soho comes up holding her neck. Bunny yanks Soho off the top rope. Soho hits the turnbuckles with her neck on the way down. Ouch! Soho outwits Bunny by backsliding out of her Down the Rabbit Hole for the pin. As Soho is celebrating on the rampway, Penelope Ford hits her from behind. Ford and The Bunny beatdown Soho. As Bunny holds Soho, Penelope knocks her out with that pair of brass knuckles.

Sammy rocks Sky early on. Santos tags in punching Jericho all the way across the ring and into a corner. Hagar tags in and he, Santos go at it. They both hit each other with brutal punches, kicks and knee shots. Jericho decides to go after Jorge Masvidal on the floor. Page flies off the apron nailing Jericho. In the ring. Santos actually powerslams Jericho. Sammy is hot-tagged in. He executes a fantastic double springbaord cutter. The crowd goes mental when Jericho lands the Lionsault on Sky. As they fight on the floor, Hagar slams Santos through a table. Paige VanZant distracts Aubrey Edwards. Masvidal sends Jericho into next week with a running knee strike. Sky pins Jericho. America Top Team and their pals stomp the crap out of Jericho until Santana and Ortiz arrive to drive the heels off.

For those who appreciate actually wrestling, this was your show, your episode. The Buy-In really helped shore up this week’s rating. This was Rampage’s best episode thus far mainly because of the Danielson and Suzuki bout. The rest of the matches were all strong especially Punk and Sydal. They put on a real clinic so hats off to them as well. The main event was a total schmoz but still a lot of fun. Obviously, that war is far from over. Could a match between Jericho and Dan Lambert be in the cards? It seems likely.