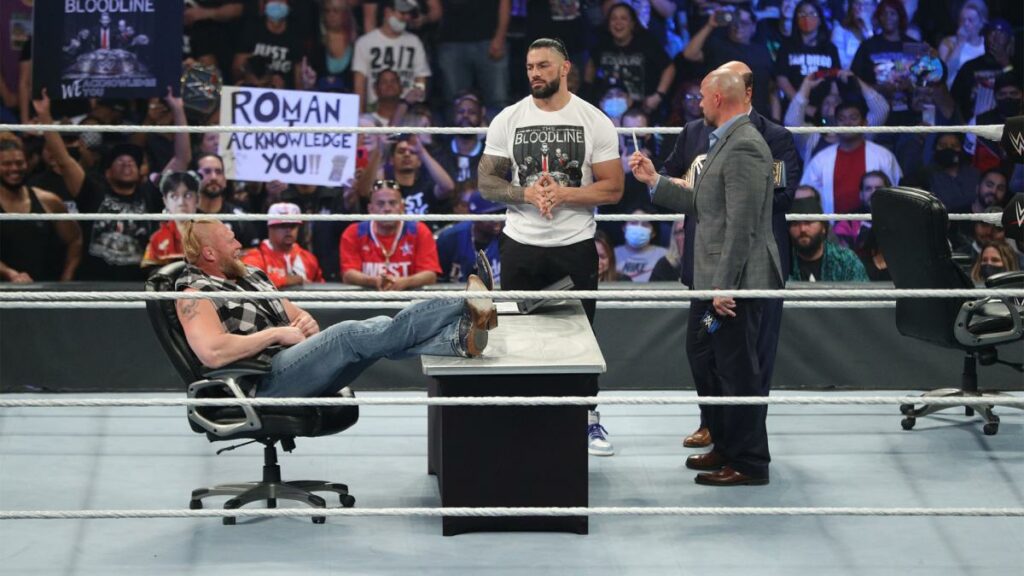 Featuring a contract signing, this October 15th episode of SmackDown has 30 more minutes than your regular bowl of SmackDown!

Edge comes out and recounts his and Seth Rollins’ rivalry up to this point. He says he’s underestimated Rollins, which since he and Rollins are so alike, is like underestimating himself. He says Rollins isn’t Edge Lite, he’s his own man. But he’s going to turn that man into a husk of what he is now. He says he’ll give Rollins a scar on his soul in Hell in a cell, one that he’ll never heal from.

Finn Balor starts off controlling Sami with a hammerlock, but Sami comes back with some kicks and chops. Balor delivers a basement dropkick and an arm drag, but Sami hits a clothesline for 2. He pins Balor twice more out of frustration, but he only gets a 2 count both times. Sami locks in a chinlock, but Balor fights out, sends him to the outside and dives onto him with a Swanton as we go to commercial. 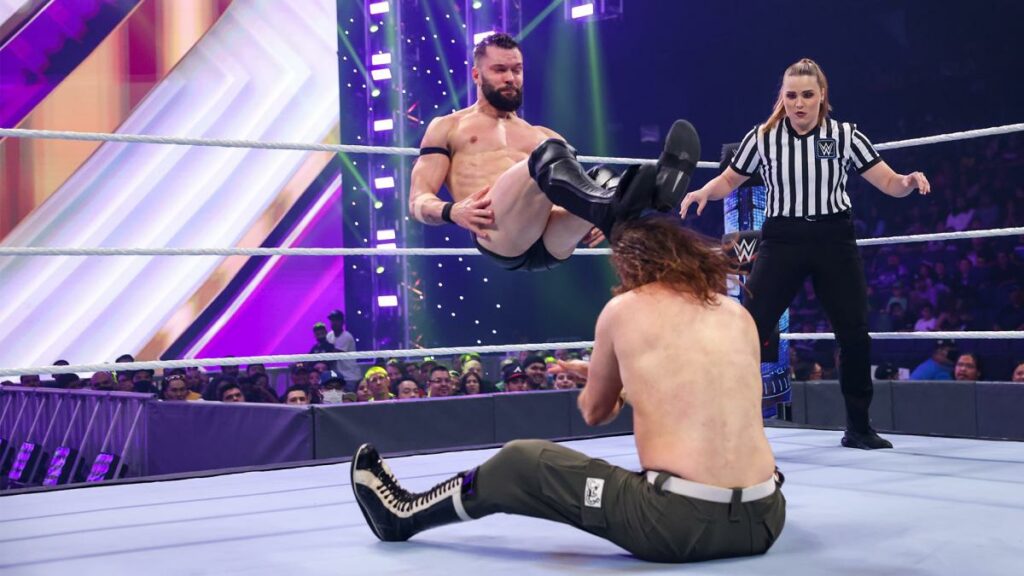 Finn Balor with a dropkick to Sami Zayn. Photo: WWE

When we come back, Sami is in control, bonking Balor’s head off the turnbuckles. They trade strikes, with Balor ending the sequence with a brutal Pele kick. Sami runs to the outside and hangs Balor up on the ropes, but when he goes to the top rope, Balor meets him up there. He looks for a superplex, but Sami shoves him to the ground. He looks for an attack from the top rope, but Balor hits him with a dropkick. Sami answers right back with a Blue Thunder Bomb, but he only gets a 2 count.

Sami delivers an exploder into the corner, but when he goes for the Helluva Kick, Balor avoids it and kicks him. He looks for the Coup De Grace, but Sami shoves him off the ropes and rolls him up, using the ropes to his advantage. The ref catches him and stops the count, which gives Balor the opportunity to hit a Slingblade, a Shotgun Dropkick, but Sami once again avoids the Coup de Grace. Sami rolls him up, but the Prince reverses it into a double foot stomp. Balor hits two more Shotgun Dropkicks followed by a Coup de Grace to get the win and move on to the finals. 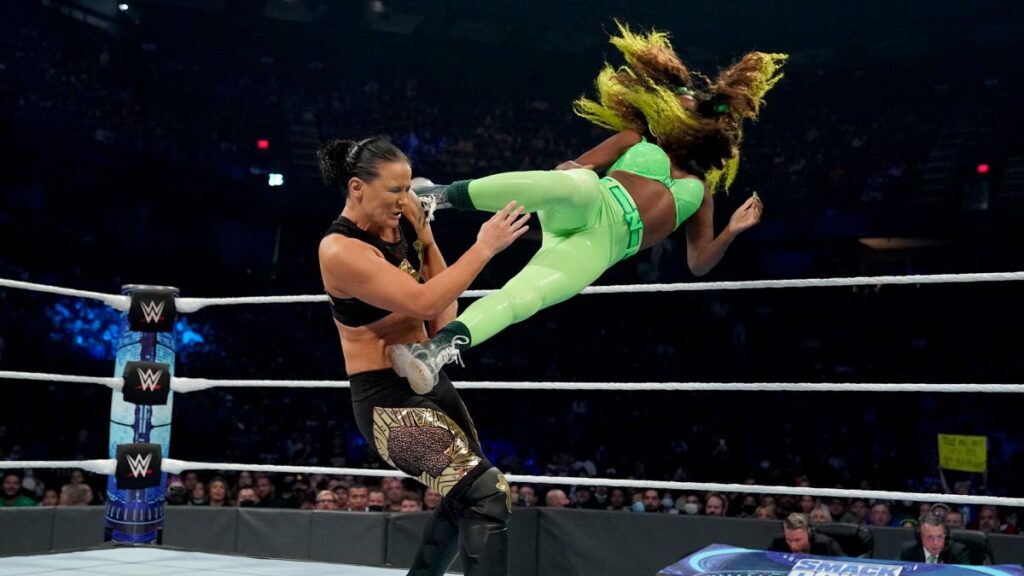 Glad to see Shayna back to serious storylines. Photo: WWE

Sonya Deville comes out and announces that this match will be a handicap match, with her and Shayna Baszler VS Naomi. To add insult to injury, Sonya says that she makes the rules and that there won’t be tags like in a normal handicap match. Naomi fends off Shayna with kicks and chases after Sonya, but Sonya catches her with a running knee. She and Shayna beat Naomi down, but Naomi fights back with a springboard kick. Naomi chases after Sonya, but Sonya tricks her right into Shayna’s Kirifuda Clutch. Naomi passes out, and Sonya puts a single foot on her to pin her for the 3 count.

Seth Rollins comes out and laughs about how Edge thinks he has a chance at Crown Jewel. He says he is in no way afraid of his Hell in a Cell match with Edge. Why, you may ask? Because hell has already frozen over, since Edge said that he was wrong and that Rollins isn’t Edge Lite. Rollins points out that he apparently has the physical and mental advantage, and that since he isn’t afraid of Hell in a Cell, the ace Edge thought he had up his sleeve doesn’t mean anything. He’s already been through Hell in a Cell, and he’s been changed by it.

Before the match, Vega tells Carmella not to wear her face mask, since she’d never go after the most Beautiful Woman in WWE’s nose like Liv Morgan.

Carmella rolls up Vega to start the match, and has a laugh with Vega after she does. Vega does the same, but Carmella treats her like a fun little pet, laughing and putting her in a mean looking armbar. Vega reverses it into an arm drag and rolls Carmella up, but Carmella kicks out and then kicks Vega right in the face. An enraged Vega charges at Carmella and attacks her face, and Carmella runs away to get her mask, however, Liv Morgan got her hands on the mask, so Carmella runs away to the ring, where Vega rolls her up to get the win.

Madcap Moss and Happy Corbin make their way down to the ring for an episode of Happy Talk. He gets Madcap to tell the crowd a joke. It’s awful, as predicted. They poke a little fun at Kevin Owens, and then go after some of the new superstars coming to the SmackDown roster. Finally, Rick Boogs interrupts them with a sick guitar solo. They dance around the ring, and when the Street Profits come out, Boogs plays their theme as well.

Dawkins hits Jey with the Silencer immediately, but Jey goes outside and then slams Dawkins into the barricade. Ford goes after Jimmy, but Jey comes up from behind and hits a neckbreaker for 2. The Usos go after Dawkins next, tossing him once more into the barricade. Ford jumps over the ringpost onto the Usos, and then he and Dawkins pull out a table. The Usos hit them both with suicide dives as we go to commercial.

When we come back, The Usos are bringing the kendo sticks into the fight and onto Dawkins’ chest and back. Ford dives onto both Usos with a massive crossbody, before sending Jey to the outside and hitting a series of strikes on Jimmy. Ford hits a chair assisted enziguri, but Jey puts him down with a pop-up Samoan Drop. The Profits return fire with an assisted suplex for Jey, before they get some kendo stick-flavored revenge.

The Profits look for the Doomsday Device, but Jimmy helps Jey escape it and the champs hit double superkicks on Ford and Dawkins for 2. The Usos look for the Uso Splashes, but Ford shoves Jey away and he and Dawkins hit the Anointment and From the Heavens combo for a near fall, but Jey pulls Ford off the pin before slamming him through a table. Dawkins beats down Jey on the outside before going back into the ring and rolling Jimmy up for 2. The kick out sends Dawkins into a punch from Jey, which in turn sends him into a superkick from Jimmy. The two deliver a double superkick followed by a double Uso Splash for the win.

With Bianca Belair on commentary, two of the greatest competitors of this generation trade roll-ups and wrestling holds like it’s WrestleMania and not 10pm on a Friday. Becky looks for the Dis-Arm-her, but Banks looks for the Bank Statement, and they trade finisher attempts before Banks slams Becky into the corner. She hits her with a double knees for 2, before rolling her up for another 2. Becky catches her with a leg drop and a neck snap for 2 to gain control. Becky stomps down the Boss in the corner, but Banks tosses the Man to the apron. She looks for a double knees against the ringpost, but Becky moves and Banks crashes and burns.

Becky delivers an arm snap on the apron for 2 before tossing Banks to the outside and waiting for a count-out. Banks makes it back in before 10, and she gets a series of kicks and punches for her troubles. Banks returns some strikes, but Becky pulls her leg out from under her and hits her with a bulldog for 2. Becky locks in a Camel Clutch, but Banks fights out of it and hits a perfect Three Amigos for 2. Banks goes to the apron, but Becky slams her into the ringpost and locks in a rope assisted Dis-Arm-Her. She then climbs to the second ropes and hits a leg drop with Banks hung up on the ropes for 2. 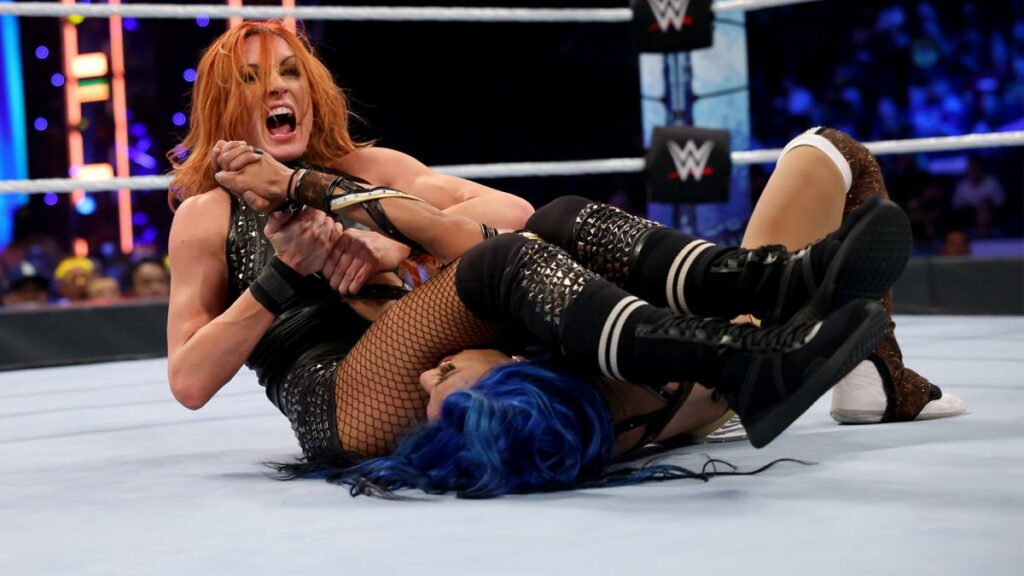 Michael Cole called this the Dis-Arm-Her. This is objectively not that. Photo: WWE

Becky hits a springboard kick on Banks that sends her to the apron, but Banks slams the Man’s arm into the ringpost. She hits a knee strike followed by a double knees against the ringpost. The Boss gets a 2 count from a flying meteora and a backstabber, but when she tries for a sunset flip powerbomb to the outside, Becky reverses it into a leg drop on the apron. The Man tries for a flying clothesline off the steel steps, but Banks reverses it into the Bank Statement before tossing the champ into the ring and hitting a Frog Splash for 2. Banks dishes out some punches, but Becky hits an uppercut and some clotheslines. Banks hits a running double knees, but when she goes for a second one, Becky catches her with a Becksploder for 2, followed by a leg drop for another 2.

The SmackDown Women’s Champ tosses Banks to the apron and tries for a leg drop, but Banks avoids it and pulls her outside. Becky tries to hit Banks, but Banks moves and hits Belair. Banks takes advantage and hits a flying meteora, but when she goes for another Frog Splash, Becky gets the knees up and pins her for 2. The champ hits a butterfly suplex and looks for an armbar, but Banks rolls her up for 2.

Becky delivers some uppercuts and looks for the Manhandle Slam, but Banks rolls her up for 2 before locking in the Bank Statement. Becky crawls to the ropes to escape, but Belair whips her braid right close to Becky’s face, distracting her long enough for Banks to hit the Backstabber to get the win.

It’s time for the contract signing between Roman Reigns and Brock Lesnar. Absolutely nothing will go wrong at this polite and civil sports entertainment legality ceremony. Roman Reigns stands silently and stares Brock down, while Brock chills with his feet up on the table. Paul Heyman reads over the contract and tells Roman to sign it, which he does. Very exciting so far. Brock signs the contract before even reading it, for which Roman calls him stupid. The Beast Incarnate laughs and says he already read it this morning, with his advocate, Paul Heyman. Whose side is this Heyman guy on?

Really great show, some absolutely incredible action. Banks VS Becky and Usos VS Profits felt like pay per view matches, and Edge had a very compelling promo.