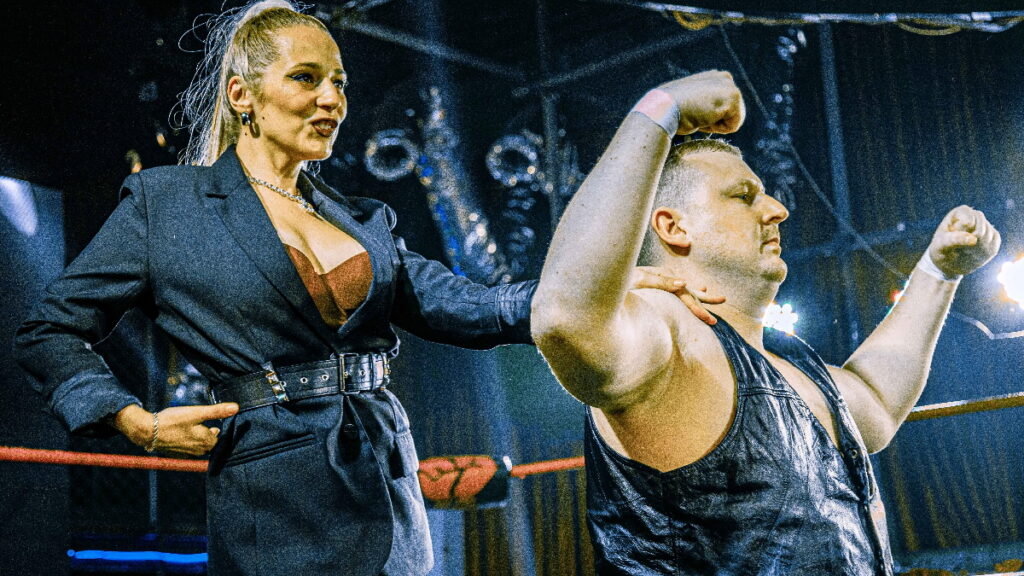 Current King of Pro Wrestling champion Big Sam is the preeminent foreigner in Chinese professional wrestling. As of Friday, October 15, 2021, he can be seen along with his faction “The Stable” in the new season of Middle Kingdom Wrestling.

“Big” Samuel Burgess came to China as an exchange student and has worked there as a digital marketing manager since graduating in 2007. Despite poking around to find pro wrestling, he didn’t and wasn’t able to put his United Kingdom, training to use there until 2012.

Burgess was born in England and vividly remembers his first exposure to pro wrestling in 1992. “I was at my friend’s house and him and his dad were mimicking Macho Man and Hulk Hogan — ‘Dig it, whatcha gonna do brother?’ I’d never seen wrestling, so I was laughing,” Burgess recounted to SlamWrestling.net. “They said, ‘Do you know Hulk Hogan, Sam?’ I said no and that was like the stepping stone.”

From there Burgess was able to check out WWF on Sky TV as much as he could and WCW on terrestrial TV. These two American products he says, “killed all the British stuff.”

WWF consumed Burgesses’ imagination, leading him to pursue the sport himself as an amateur. The occasion of getting to see WWF live on a European tour in 1993 was a memory highlight marked with the purchase of an Undertaker baseball cap he cherished for years. 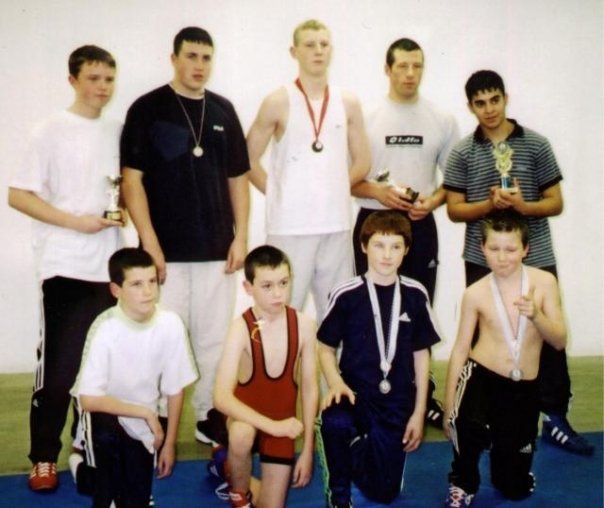 Big Sam stands tall in the back of his wrestling team photo as an adolescent.

Amateur wrestling was great, but in judo Burgess said, “I really felt I found my niche, I really found my sport.”

A wrestling school was a rarity in the 1990s. Burgess was able to get his first taste of training as a pro at Hammerlock Wrestling. As he was too young to drive, so his father would take him on the two-hour-plus journey. Burgess continued his training in the early 2000s after a sporadic stint training under World of Sport legend Orig Williams in a boxing ring and later a crash course under Basix Pro Wrestling trainer “The Iron Man” Mike Roberts.

Thanks in part to his imposing 6-foot-3, 265-pound build, Burgess was able to debut less than a year. Usually in the top 10% size-wise on events, he was a sought-after prospect on the regular independent Holiday Camp events. At that stage of his career, Burgess did not give much thought to merchandise other than shirts. “I kinda neglected the merchandise, I really did. At these [Basix] British wrestling shows the big thing they used to sell, it was very kid friendly wrestling, they would sell their own merch but it used to be WWE type of copies, like Rey Mysterio masks and these inflatable hammers, so when the heel was thrown out of the ring the kids would [all] bash him.”

A few years later Burgess made his way to China for the non-wrestling work opportunity.

With wrestling essentially non-existent in China, Burgess had his old passion tweaked at a comedy show, of all places, in Shenzhen, where he was living a the time. “The comedian on stage made a comment about my size and said something about Hulk Hogan being in the audience and jokingly asked me if I was on break from WrestleMania. I spoke to him after the show, and he told me about Hong Kong Wrestling Federation (HKWF).”

Burgess contacted HKWF head Ho Ho Lun, known to Western fans for his participation in WWE’s Cruiserweight Cup. Although Hong Kong was not a place Burgess could commit to traveling to often, Lun recommended another promotion in the mainland and thus the doors to Chinese wrestling were opened to Burgess.

In 2015, while returning from a pec tear, Burgess became involved with the Middle Kingdom Wrestling promotion. He was recommended to promoter Adrian Gomez by The Slam, who was the promoter/founder of the first ever Chinese promotion, Chinese Wrestling Entertainment.

It was in the storyline driven MKW that Burgess would come upon the gimmick that would bring him his best merch pay days. 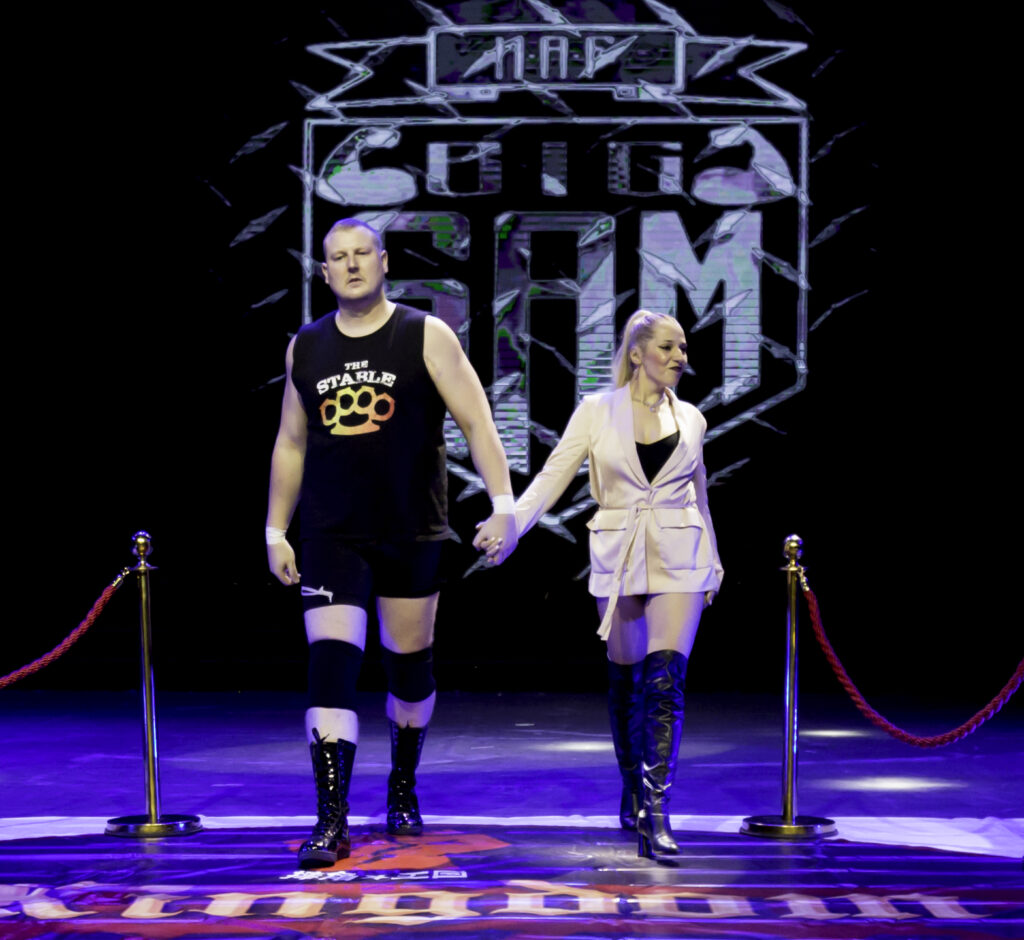 Big Sam walks to the ring in his Stable shirt with Lady Marie.

As a member of “The Stable,” Burgess found his niche as the powerful yet wily ring general alongside his valet Lady Marie, manager Chairman Al, and partners Uncle Money and Ash Silva. Together they gathered MKW’s gold in the form of championship titles and through merch stand revenue with their T-shirt.

Burgess says merch and the business and production side of the business intrigue him. He plays an important role in MKW behind the scenes, and has since its beginning.

“Because of Big Sam’s experience in the pro wrestling industry in China, he was an essential part of our growth early on in the company’s history, in all kinds of aspects,” recounted MKW Promoter Adrian Gomez.

Burgess more than is happy to promote the upcoming episodes. “I believe this [season] will be better. We’ve got an audience we can feed off. Recently we’ve had very limited fans or it’s been empty. We are entertaining live.”

The new season of Middle Kingdom Wrestling will be covered here at SlamWrestling.net.