I was there the night The Sheik bit a fan! 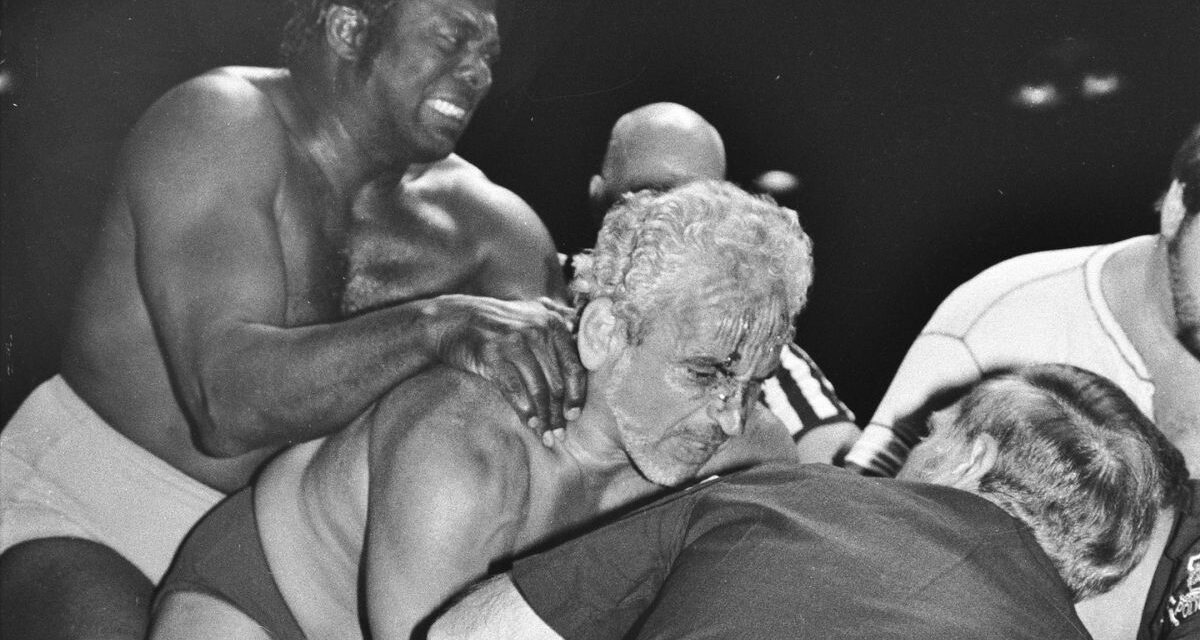 One of the more disturbing incidents of my career in pro wrestling happened in Flint, Michigan. Naturally, it involved The Sheik and violence.

Flint is about 90 miles north of the famed Cobo Hall in Detroit. In the early to mid-1970s, The Sheik — acting as promoter under his real name of Ed Farhat — was drawing around 10,000 to Cobo every other week.

He also had his own TV in many of the outlying cities and Flint was one of them. These cities all drew good crowds and The Sheik was riding high. But by 1978, when this incident took place, the Michigan landscape had changed for the worse. For a variety of reasons, crowds had diminished, and 1980 was the last year for The Sheiks’ Big Time Wrestling at Cobo. Others venues had also dropped drastically; but The Sheik wrestled on.

The Flint Industrial Mutual Association Auditorium — we called it the IMA — was just one of many regular stops for Big Time Wrestling, and in the summer of 1978, I made the drive up with a long-time friend to see The Sheik against Bobo Brazil. I had seen those two work dozens upon dozens of times in any number of cities. I expected nothing out of the ordinary to happen. I certainly didn’t expect Bill Apter or anybody else to buy pictures of Sheik versus Bobo when they already had files bulging with pictures of those two going at it. But it was summer and my friend and I had no set plans, plus the IMA sold Budweiser on draft and it might have been a buck a beer. 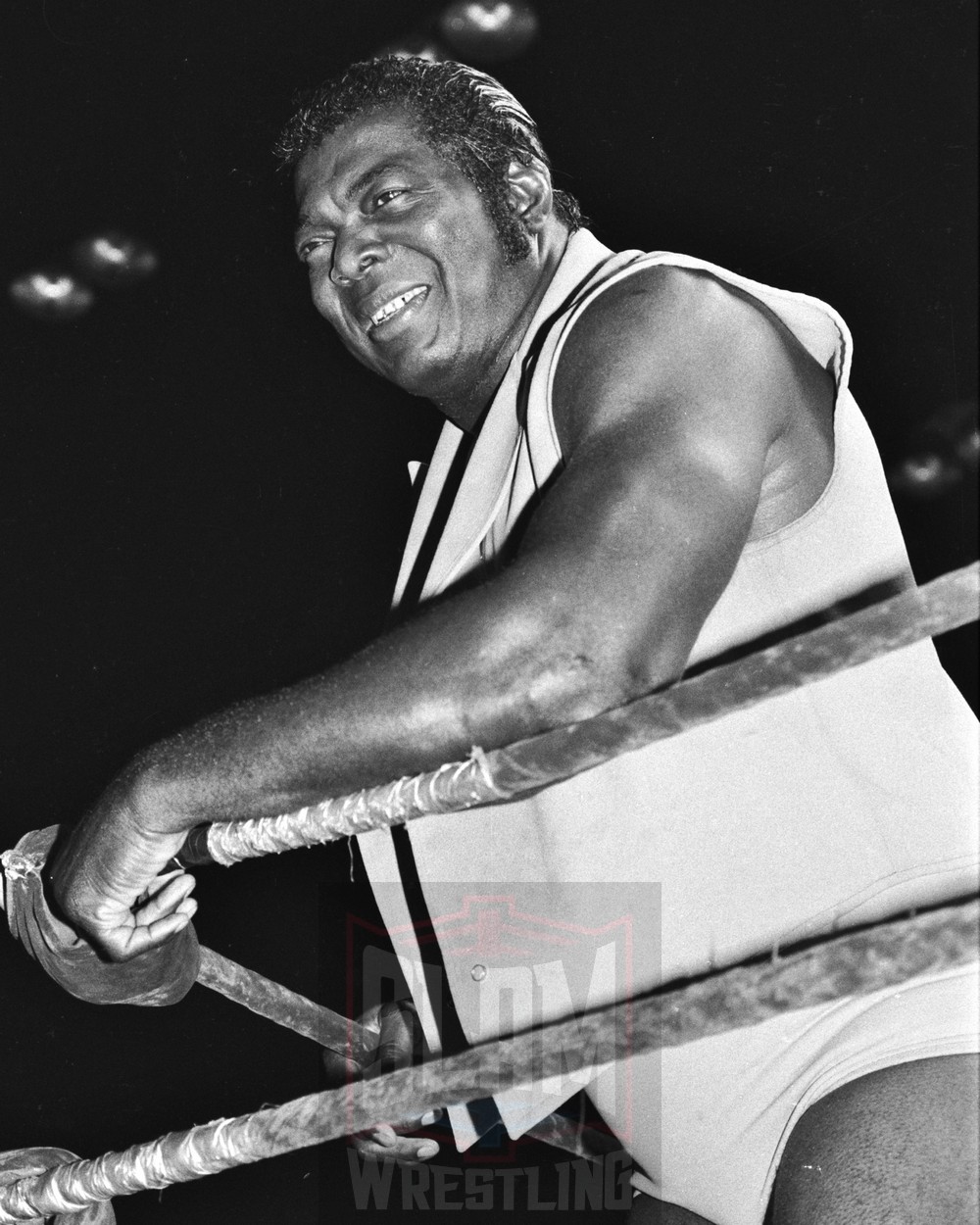 We got there early. I checked in backstage to say hi to Sheik and a few of the boys. No big deal. Mike Wayne was a long time jobber for Big Time. Before the show, we sat for a while and talked about pro bowling — we were both big fans and we also bowled ourselves. The evening’s matches were set to proceed and I went back out to find my buddy and we climbed up to the concessions and had a beer. Maybe two. I didn’t need or want photos of the preliminary matches. I just wanted the main event. After all, even Babe Ruth got fat and old but people still showed up for his games. 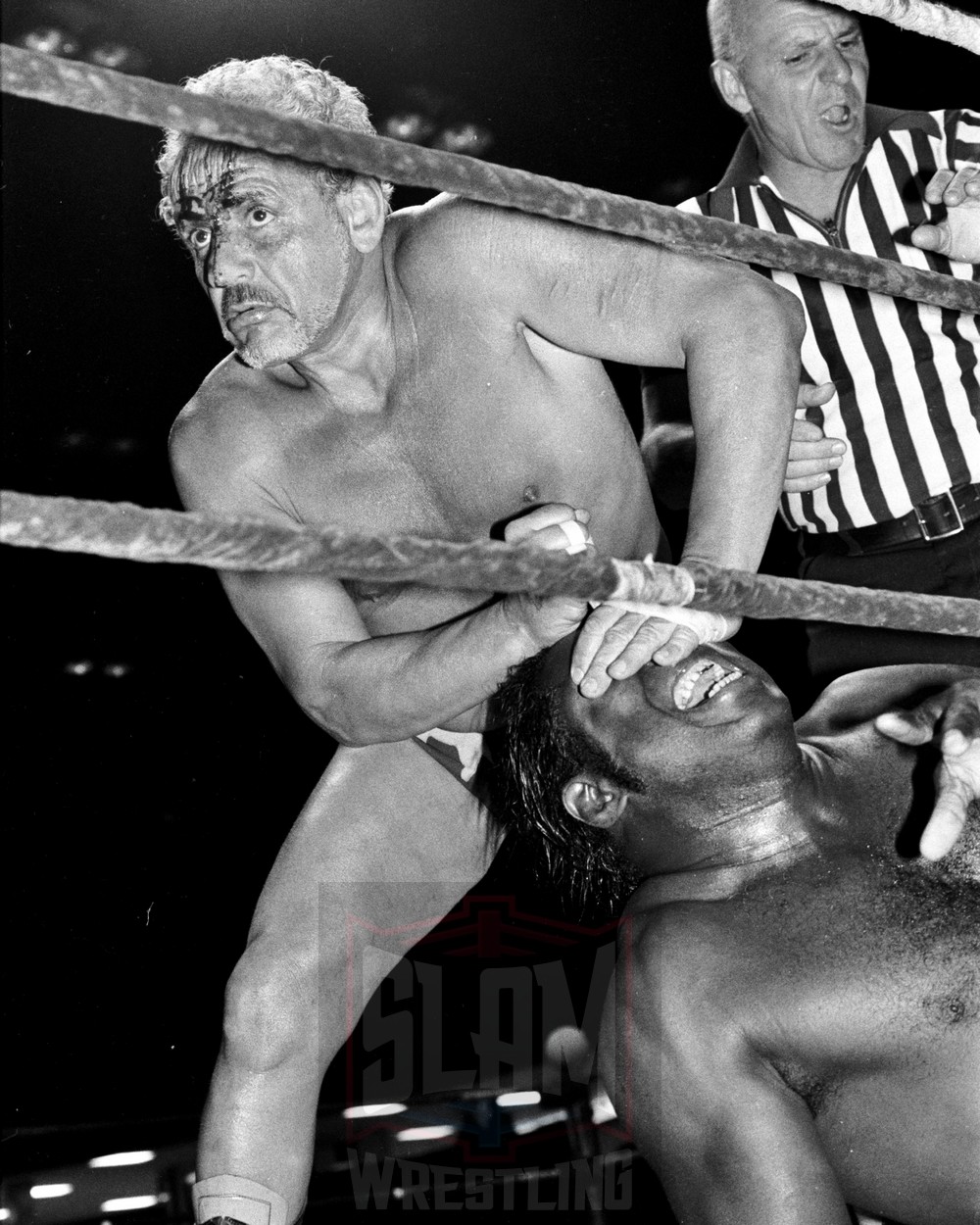 The Sheik versus Bobo Brazil in Flint. Photo by Brad McFarlin

And then it started — The Sheik defending his prized U.S. title against Bobo Brazil. It was 44 years ago, but I can tell you almost spot by spot what happened because this was technically a re-run of a re-run. Bobo turned his back and The Sheik attacked. He choked, slugged, kicked and kept Bobo on the ropes. The ref got distracted by whomever Sheik had as manager that night and Sheik dug out his pencil which he proceeded to try to blind Brazil by repeatedly gouging at Bobo’s eyes. Out of nowhere, Bobo made a comeback. A few chops and punches and the pencil flew out of The Sheik’s hand. Brazil grabbed it and began to carve up The Sheik’s forehead which somehow started to bleed. The crowd of maybe 1,000 were cheering wildly. The spot came for the manager to once again distract the referee who didn’t see The Sheik foul Brazil and regain control. Sheik had a rope which his sneaky manager had thrown in and began to throttle the hapless Brazil — who sold like his life was about to end. Maybe it would have … except …

A fan from the crowd jumped the barricade and climbed into the ring to save Bobo! 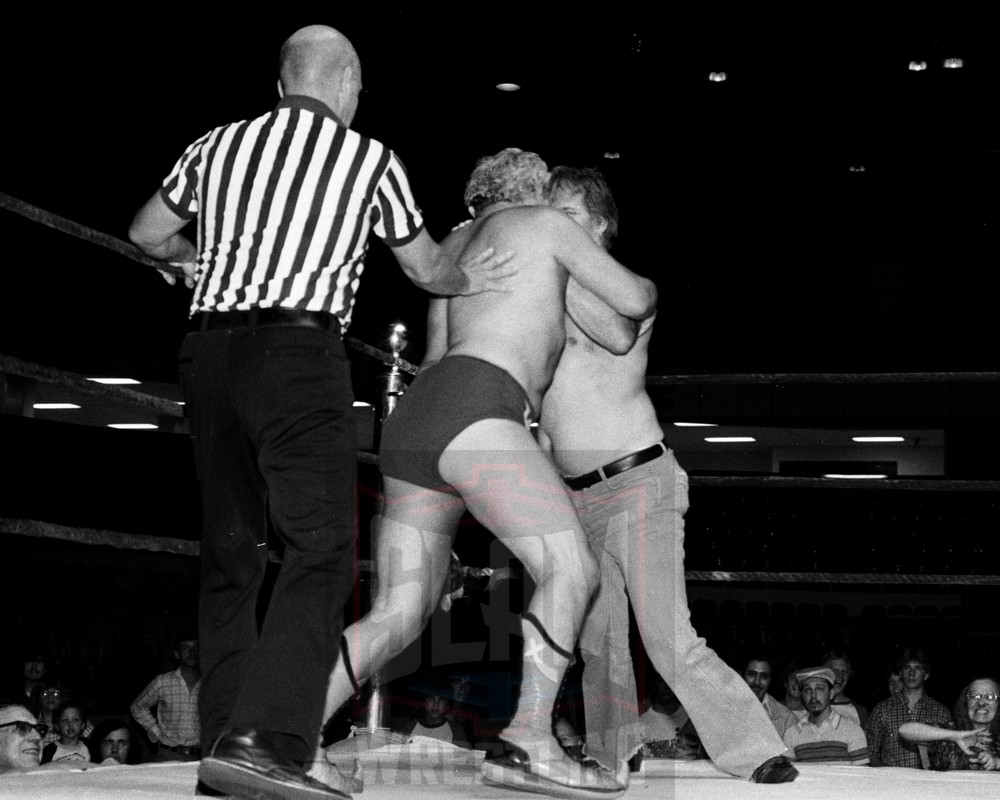 Let me stop for a moment and try to explain that this was 1978. Kayfabe was dying but it still existed and some people, if only a small percentage, still believed that wrestling was all real. Nowadays some fan might get lucky (?) and flatten Seth Rollins, but that is now and we are talking about 44 years ago when fans still believed. Every villain of the those times had to watch his back before, during, and after, as you just never knew. Sometimes security was tight. Sometimes it barely existed. Fighting for your life was a real thing. 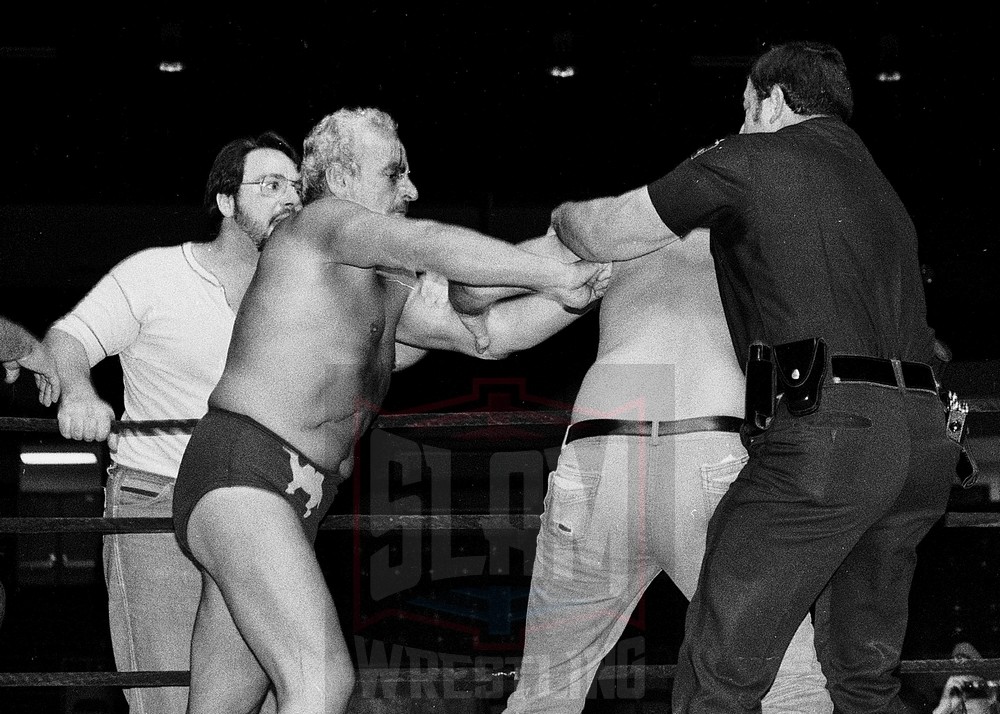 So this fan jumped into the ring and started to yank The Sheik off of Bobo. It might have seemed like forever but The Sheik reacted swiftly. He dropped Bobo and stood up to grab the fan by the hair. He kicked him in the groin and, still holding on to the guy’s hair with one hand, began firing a rapid series of punches to the head. The fan went down, and the seated rent-a-cops suddenly realized that this wasn’t in the script. Eddie Farhat Jr. was yelling in their ear to smarten them up, so that helped. The cops jumped in to save The Sheik — who by this time was beyond saving. 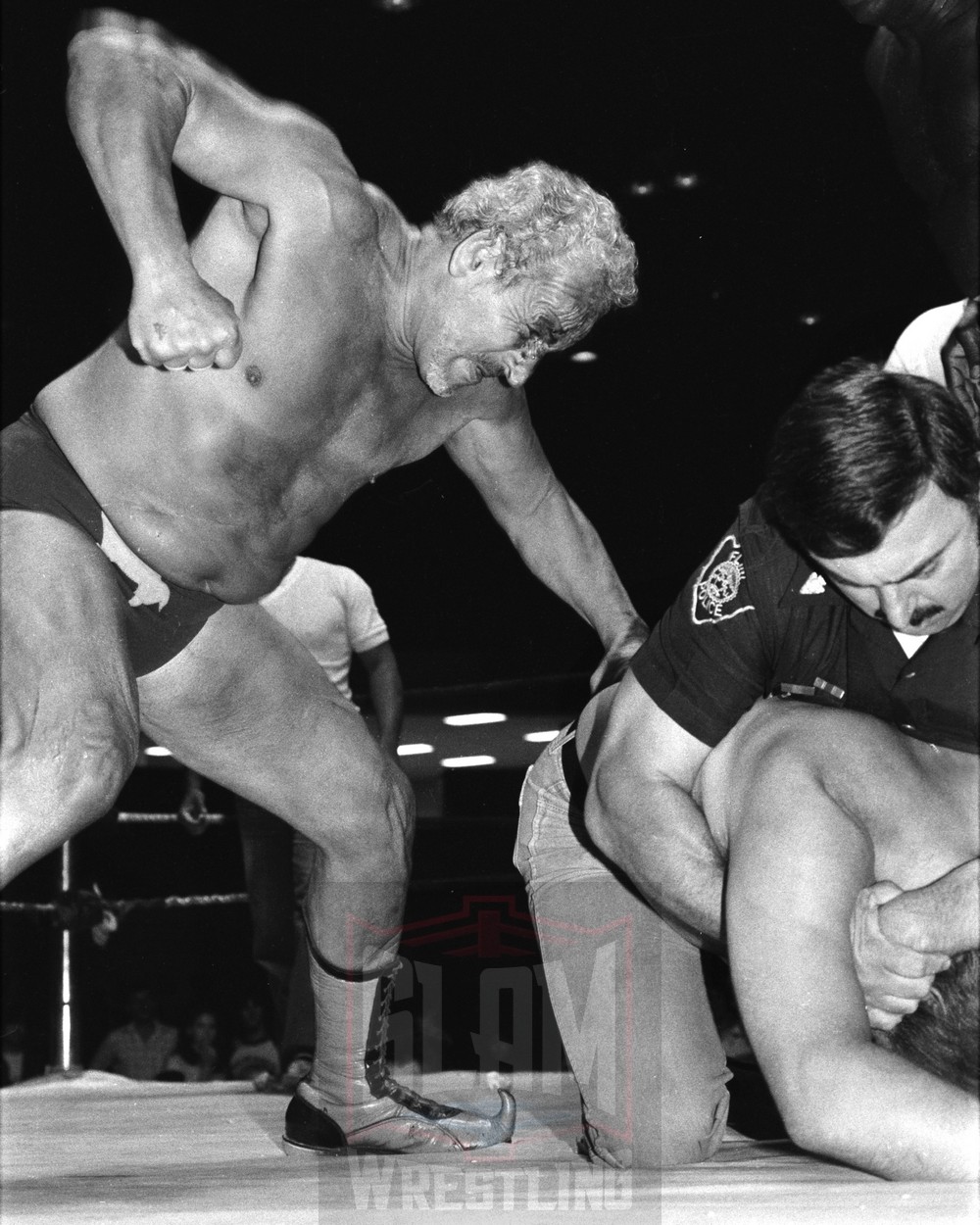 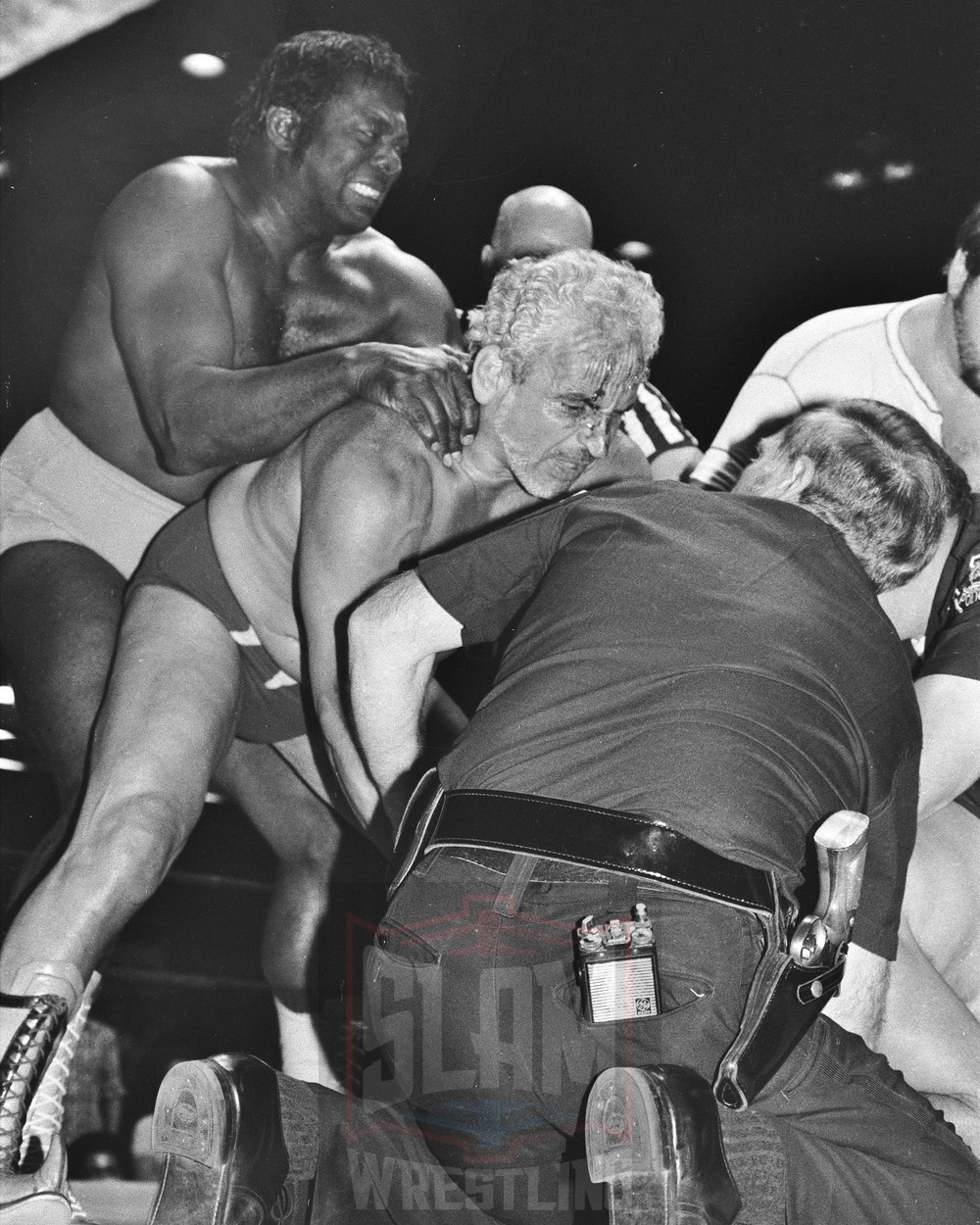 By this time, Bobo had “recovered” and it was almost kind of funny watching him try to restrain The Sheik from committing a homicide while still maintaining kayfabe. Eventually the cops, Eddie Jr. and a few of the boys from the back managed to drag the fan out and took him backstage. The Sheik turned back to Brazil as if nothing had happened and they finished their match as planned — Sheik going over Bobo using the ropes for leverage in a pinfall. 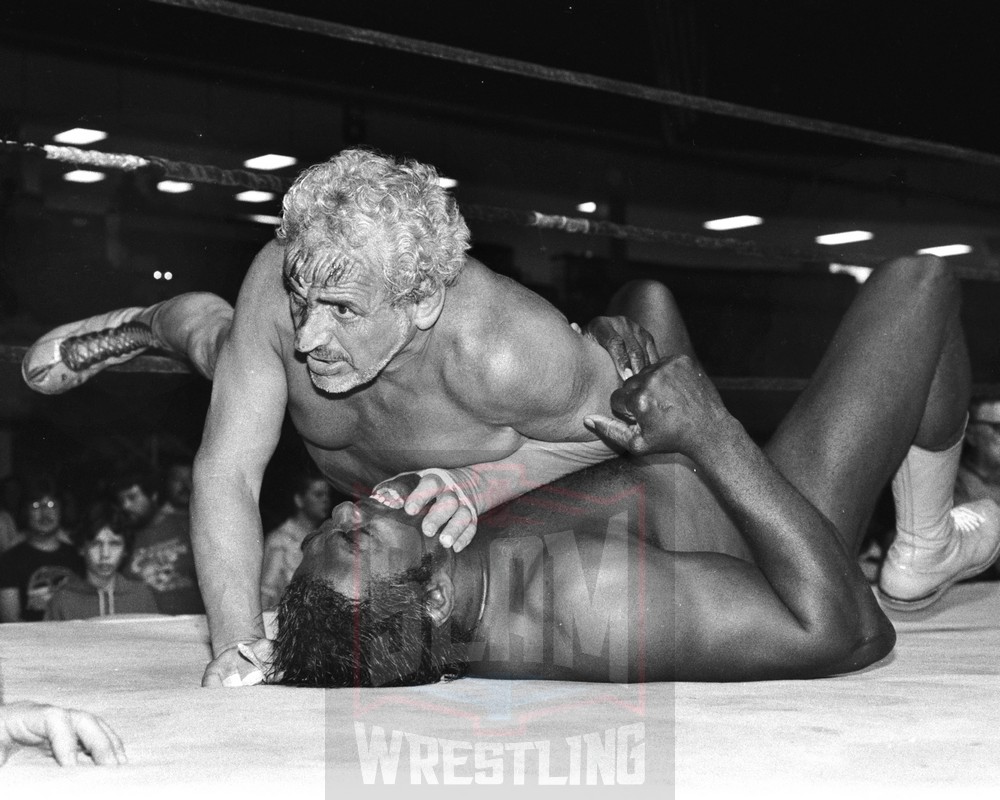 I sat seated for a few minutes after they all left the ring and my friend and I discussed what had just gone down. He was as shocked as I was. I packed up my photo equipment and went backstage to check on Sheik. He saw me coming in and laughed. I asked him if he was OK and he just nodded. Then he said, “Make sure you burn those negatives!” I assured him I would never show them to anybody. I had no idea if the cops were going to arrest anybody or if the idiot who had just been clobbered might try a lawsuit. So I just just processed the film, made a proof sheet, and filed them away. Life went on.

Then 44 years later, while going thru a dusty box of negatives, I came upon them and decided to look into the story and find out more. By now, The Sheik, his wife, and Eddie Farhat Jr. were all deceased. No lawsuit ever came about that I knew of. So I got in touch with Terry Sullivan, long time announcer for Big Time Wrestling, who was there, and little did I know, he had the rest of the story. Here’s how he told it to me:

“I remember it well. Eddie Farhat Jr. was the promoter this time. I drove Sheik from Toledo to Flint. I wasn’t working as ring announcer. I just wanted to watch the show. After the incident, Sheik had me go to where the cops had this guy. The police had him in a holding room in cuffs. His nose was all messed up — swollen and bloody. His face was battered and bruised. He was very compliant and most of all was very sorry he had ever done something so stupid. Sheik wanted him to sign a release. So I wrote something up saying he agreed not to sue The Sheik, Big Time Wrestling, or the City of Flint, which owned the IMA. He signed with no problem at all. Especially after I told him that if he signed, that The Sheik would not press charges, and the cops would let him go.”

That was 1978. That was The Sheik. When wrestling was still very real… or if not, you didn’t want to find out the hard way.