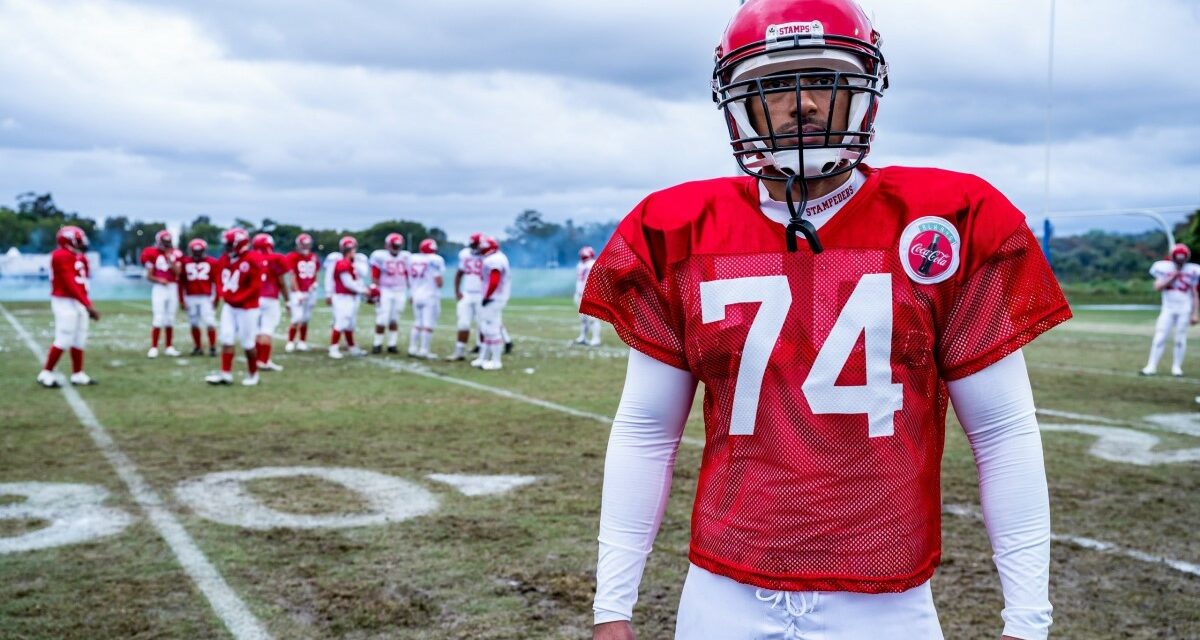 Tonight’s episode of Young Rock portrays pivotal moments in the life and times of Dwayne Johnson that would set him on the path towards wrestling, and the rest would be history. It also features a particular moment that has become a big part of Johnson’s lore: when he found himself with only seven bucks in his pocket, scrambling to come up with a plan B – or by that point, a plan C.

The title of the episode, fittingly, is “Seven Bucks”.

It’s 1995 and Johnson (Uli Latukefu) is laser-focused on a football career. Not being drafted by the NFL had led to him taking the CFL’s Calgary Stampeders up on their invite to try out for the team. When even that didn’t pan out, Johnson accepted a role on the practice squad with the goal of making it to the NFL still foremost in his mind. As with last week’s episode, Johnson is seen brushing shoulders with CFL greats Jeff Garcia, Doug Flutie, and head coach Wally Buono. It’s his time and friendship with Kenny Walker, though, as played by Kurt Roberson, that pays the greatest dividends and helps Johnson obtain clarity in troubled times.

Backing up a bit, the show opens as Randall Park continues his one-on-one interview series with Dwayne Johnson of the future, playing himself in 2032 as he seeks the presidency of the United States. The banter between these two often produces some of the funniest moments in the show, and there are some good bits tonight such as Park admitting to breaking (and poorly attempting to fix) a mug that one of Johnson’s daughters made for him — but that was bettered by Johnson showing off one of his horses to Park and saying its name is Jeff Goldblum, named after his good friend Emily Blunt. It’s mostly nonsense stuff, but what works is that both Johnson and Park play it straight so it’s a very deadpan routine. Blunt, of course, co-starred with Johnson in the movie Jungle Cruise.

Johnson receives word that a journalist in St. Paul, Minnesota has interviewed someone claiming that The Rock tried to kill him while in school together. Johnson laughs it off and segues into a story about how you have to roll with the punches when taking on crazy situations like that, a little bit like when he had his dreams of playing in the NFL dashed.

Once again in 1995, Johnson is shown to be getting the hang of the unique CFL rules and learning how to be an effective practice squad teammate, but all the while he lives in terror of “the pinch”. The pinch, as he describes to his girlfriend Dany Garcia who is working in Miami, is a weird, two-fingered knuckle pinch that Johnson calls as a “very Canadian” way to let a player know they’re being cut. I can’t find any corroboration on this odd factoid, but it’s one of those things that seems too weird to be made up.

Of course, it’s only when Johnson stops fearing the pinch and isn’t on the lookout for it that it finds him, and he’s cut from the team. He receives a heartfelt dismissal from Buono, who is captioned on the screen as a “great coach, great man”, and Johnson has, in real life, spoken many times about his fondness for his time with the Stamps and Buono’s coaching. Where this leaves him, though, is heading out of town with only the famous seven bucks to his name.

That seven bucks represented the lowest point in Johnson’s professional career, and he has that amount framed and hung in his house to remind him of how much his life turned around from that point onward — and, of course, today he helms Seven Bucks Productions along with Garcia as business partners.

What he gained from Kenny Walker is portrayed a little differently in this episode than has been told by Johnson before, but like all things in Young Rock, it’s subject to a little creative interpretation to fit all the pieces together for television. Johnson is shown fishing with Walker and breaking his fishing rod, feeling terrible about it and vowing to pay him back. Walker shrugs it off and tells him “It’s just a thing”, which in its simplicity turns Dwayne’s head around and changes his perspective on what it is he’s after (Johnson has also told the story of Walker telling him this on the way to the airport for his flight back home to Florida — a minor change).

Johnson arrives home and is picked up by his father Rocky, who is now working for Circuit City and making a little money on the side by selling damaged equipment, while Ata is still working as a telemarketer and has spent the bulk of the episode trying to get a care package to her son. It finally arrives, of course, once he’s left to come home. Lia Maivia, meanwhile, is still fascinated by the O.J. Simpson trial which, along with the references to singer Natalie Merchant and the movie “To Wong Foo, Thanks for Everything! Julie Newmar”, authentically set this part of the story in 1995.

Wrestling fans, take note: it’s once he’s back in Florida that Johnson first utters the idea that since football didn’t pan out, maybe he’ll see if he’s any good at wrestling. He isn’t ready to say this to his parents yet, but it’s safe to say that the next time we see Uli Latukefu it will be in a wrestling ring, opening the door to a whole new set of stories as Rocky Maivia will start making his mark.