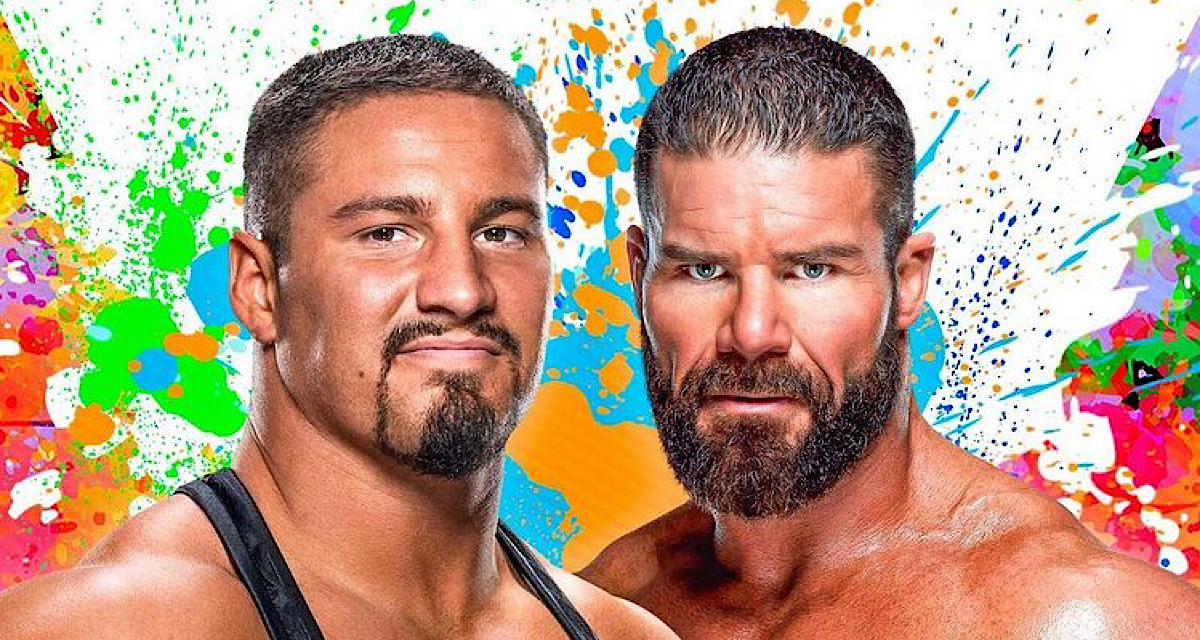 The winner qualifies for the North American Championship ladder match at Stand & Deliver, and the champion Carmelo Hayes and Trick Williams join commentary. Strong, arguably the most sound wrestler today, is back from excursion from NXT UK and isn’t nearly featured enough on television. Smooth and technical Strong takes control over Sikoa with strikes and backbreakers until Santos Escobar appears in the entranceway. Sikoa makes the comeback, knocks Strong off the turnbuckle, and delivers the top-rope splash for three. Hashtag free Roddy.

Indi Hartwell and Persia Pirotta fight over their respective relationships like middle schoolers, and they — with Duke Hudson — corner Lumis ringside. He takes majority control until D’Angelo slams him into the steel steps preceding commercial. Lumis makes the comeback but legitimately misses his signature leg drop before both men are floored. The women tug over D’Angelo’s crowbar, which he illegally uses against Lumis for the victory. D’Angelo takes the microphone, but he’s quickly interrupted by Tommaso Ciampa, who plants him with the Fairy Tale Ending.

NXT Champion Dolph Ziggler and Robert Roode are interviewed backstage, and the latter reminisces about his glory days in NXT. “Bron Breakker is about to find out that he doesn’t measure up to the former and current NXT Champion,” says Ziggler.

A promo package from Grayson Waller calls his shot at the North American Championship ladder match. Like it or not, Waller exudes confidence like no other.

Legado del Fantasma and Josh Briggs and Brooks Jensen are in the women’s respective corners, and Lopez dominates in the early goings. The tag teams inevitably brawl away ringside, and Lopez puts her opponent away with a powerbomb.

Xyon Quinn and Draco Anthony watch a video sent by Joe Gacy, who continues to extend a partnership with the latter.

Wendy Choo and Dakota Kai are interviewed about making it to the Women’s Dusty Rhodes Tag Team Classic finals. Kai is less schizophrenic, even though Choo brings up a triggering Raquel Gonzalez.

Like the pearly gates of heaven reopening, Roode’s “glorious” entrance and theme song return to NXT — a quick nostalgia trip of the brand’s better days. Breakker is a contemporary highlight though, and his strength and explosiveness match up with Roode’s experience. Ziggler quickly interferes and is thrown out before picture-in-picture where the “Dirty Dawg” brings the heat. Roode toys around doing push-ups and whatnot, but in a similar vein, Breakker connects with a Frankensteiner for two. They trade signature maneuvers, and Breakker is definitely in the running for best spear. He finally catches Roode with a mid-air powerslam, winning the match and proving why he’s an undeniable future superstar. However, Ziggler meets him on the entrance ramp with a flattening superkick.

Indi Hartwell questions whether Persia Pirotta cost Dexter Lumis his match. Pirotta says that Duke Hudson can defeat anyone, so Lumis scribbles a portrait of a future opponent: Gunther. That name doesn’t get any better, does it?

Bodhi Hayward gives a speech regarding what “fortitude” means to him, and together with Andre Chase, they curse out a fellow student for raising a hand.

In tonight’s second qualifying match for the North American Championship ladder match, A-Kid immediately shows off his speed and agility. He counters Waller’s rolling stunner with an incredible mid-air submission, bringing the crowd to its feet. But a second-rope sweep and the aforementioned stunner from Waller gets the three count. Carmelo Hayes and Trick Williams appear on the apron, and the former with whatever credibility instinctively creates the final qualifying match: A-Kid, Cameron Grimes, and Roderick Strong will have one more shot.

Robert Stone, of the Robert Stone Brand, shows client Von Wagner a video of Jacket Time interrupting his meeting with a woman. She appears thereafter, offering to continue negotiations.

“I understand that you think that it was us (who jumped you), but do you really trust those beef jerky ears of yours?” asks Zack Gibson of GYV. They ironically jumpstart the matchup and keep Julius Creed grounded. But capitalizing off of James Drake’s injured knee, Brutus Creed is tagged in to pick up the pinfall victory. “Creed Brothers… You clearly can’t find us… So we’ll find you,” says a message on screen. Hooded figures are destroying the Diamond Mine training center with “don’t cry” spray painted onto the wall mats.

Gunther has finally found an eye-level opponent in Hudson, who was frankly peer pressured into this matchup. With his signature gunshot chop, Gunther sends the audience into a legitimate frenzy before poor Hudson shortly recuperates. A few chops and a powerbomb later, Gunther puts Hudson away. The name change hasn’t hindered the aura of Gunther, who is an authentic standout of this generation. He takes the microphone to call out LA Knight, who of course appears. Gunther takes offense to Knight’s big mouth, and with MSK evening the odds, the latter gets the upper hand. At Stand & Deliver, Knight will face Gunther in an NXT blockbuster.

Cameron Grimes talks about his late father in a promo package. Now, with a second chance, he vows to qualify for the North American Championship ladder match.

It’s the finals of the Women’s Dusty Rhodes Tag Team Classic tournament, and Toxic Attraction are watching on ringside. Choo is sporting a conservative gray onesie now, so she must mean business. She saves Kai from a Tiger Feint by propping up a body pillow, but both Ray and Shirai connect with dives preceding picture-in-picture. Choo hits the “naptime elbow drop” and a top-rope throw, but Ray fights through. Kai hits a double footstomp, and Choo follows with a splash, but Shirai breaks the pin with a missile dropkick. It’s the KLR Bomb from Ray and finishing moonsault from Shirai that earns them the victory and the 2022 Women’s Dusty Cup.

The contractually obligated weekly Toxic Attraction segment is squeezed into the end. Ray wants to make the NXT Women’s Tag Team Championship match, that she and Shirai rightfully earned, a fatal-four way. Then, Cora Jade runs in to attack Mandy Rose, and Toxic Attraction flees at the show’s conclusion.

Toxic Attraction has plagued the women’s division with some completely uninteresting storylines and matches. Then you have the Hartwell-Pirotta saga, which actually looks better in comparison. It was the big meaty men slapping meat that highlighted tonight’s episode: Gunther, Hudson, Breakker, and Roode.