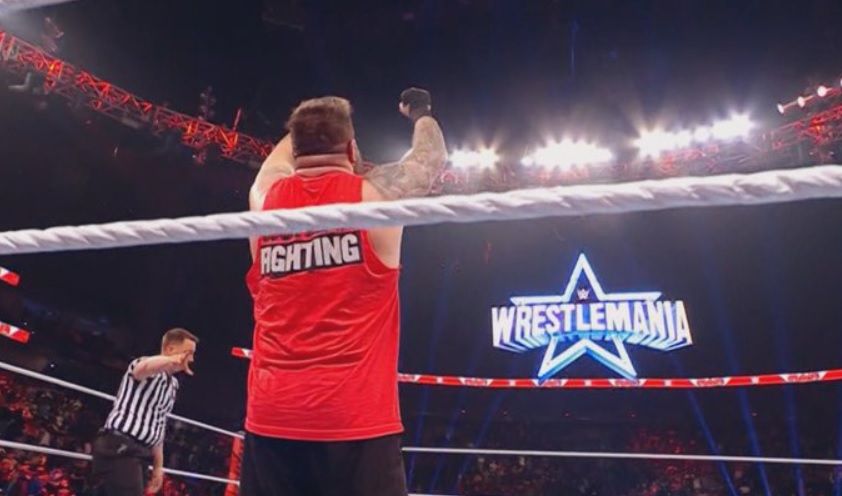 As we get closer and closer to the Showcase of the Immortals, there’s but one truth: If you don’t have your WrestleMania plans locked down yet, you better do something to make some. Kevin Owens took that to heart last week, and now appears to have had either the smartest or most foolish idea ever. Will others follow his lead tonight in Jacksonville? I’d be shocked if they didn’t. Away to USA we go.

The show begins with an “In memory of” tribute to the late Scott Hall. From all of us at Slam Wrestling, rest in peace, Razor.

In case you missed it last week, Owens challenged Stone Cold Steve Austin to … something at WrestleMania, perhaps just an appearance on the K.O. Show but maybe something more. What wasn’t shown on Raw was Austin’s video response on social media, but that’s rectified tonight. Naturally, Owens starts the show in the ring, claiming he’ll be the main event for night one of Mania since he’s nabbed Austin as a guest. As loud “U.S.A.” chants break out, K.O. claims he’ll open up a can of Canadian beer after he’s done with the Texas Rattlesnake, and that everyone will be saying “oh hell no” after he beats the hell out of Austin. “That’s the bottom line, because K.O. said so,” he shouts before dropping the cameraman with a Stunner. I mean, he was the only other person in the ring. Wrong place, wrong time for that guy.

Before these two can start throwing down, Austin Theory heads down the ramp … and then we flash back to Theory going at it with Pat McAfee. There’s going to be a match here, though, right? Ah, OK, there is, with Theory on color commentary so he can promote his WrestleMania showdown with McAfee. Alrighty then. Theory is a distraction to Balor as well, earning him a shotgun dropkick. But that costs the U.S. champ as he returns to the ring and runs into a Reckoning that keeps him down for three. Theory hits the already defeated Balor with an ATL and, of course, commemorates his “victory” with a selfie.

Kevin Patrick asks a glum looking Seth Rollins if there have been any developments or if he’s still SOL (and you know what that means) for ‘Mania. He gets what he deserves in the way of a response, meaning nothing.

Because you demanded it, I guess? Please insert the meme of Vince McMahon falling out of his chair in delight. Omos reversing a suplex attempt and throwing Azeez around is kind of impressive, and he ends up winning in short order.

K.O. tries to psych up the still sullen Rollins by reminding him of the WrestleMania moments he’s created in the past, and it seems like it might have worked. “I think I helped,” Owens says as a now smiling Rollins walks off.

This is a classic “who’s going to have momentum” match that ends with a Morgan win. But it’s also a short encounter because Rollins heads for the ring right after the bell …

Talk about your quick 180s. Rollins is nearly giddy as he walks out to his entrance theme, so we’ll see what he has up his sleeve. He has a plan to get himself to WrestleMania he says, admitting he believed all hope was lost. How about the deets, Seth? He wants to share the joy with his best friend, so he calls K.O. out to the ring. Um, this plan seems a little half-baked, as Seth says he can have a talk show too and also have Austin as a guest. When Owens points out that’s not great, Rollins suggests a match with the winner having Austin as a guest at ‘Mania. That doesn’t go over well. Their bickering brings Sonya Deville from the back, who declares that Rollins’ match idea is a go. If Seth wins, he will replace Kevin at WrestleMania. Even though Owens is a heel, you have to feel for him a bit here. His friend stabbed him in the back, for real.

The Miz and Logan Paul join the announcers and immediately get hit with the non-softball question about a difference of opinion on the topic of Cleveland. Paul dismisses any strife, noting that friends can disagree but you always have each other’s backs. They share some disdain for Jacksonville, however. Miz claims Paul is ready for WrestleMania right now, and occasionally shots are shown of the match in progress. “I’ve seen Rey, he’s impressive. But he’s also small,” notes the observant Paul. Oh yeah, the Mysterios win, but Miz and Paul immediately invade the ring after the bell and beat them down — for a minute or two. The Mysterios end up cornering Paul, and are poised to give him a double 619 until Miz pulls him to safety from the floor.

Well this will make sure Edge remains the heel in his current feud with AJ Styles, as his classic entrance theme has been replaced with something more sinister. He doesn’t believe that everyone can understand him, so he dumbs it down: He’s better than everyone. He just hasn’t been able to show it because the Edge that came back a few years ago was stuck on appeasing the fans, and he doesn’t care about them after all. Respect to Edge for calling Roman Reigns an “Aquaman cosplayer” as that’s pretty funny. This feels to me like Superior Edge, as my Marvel heads out there would no doubt agree.

Bianca Belair is asked again about her hair as an unfair advantage in her Mania match with Becky Lynch. She admits it is, but only used it when it was used against her first. Belair says she simply stays true to herself, which is her real advantage. Mostly, Bianca is happy she shut Becky up so she can concentrate on her in-ring opponent tonight.

Since we’ve already received an update on where Belair’s head is at, the announcer seem to be fascinated by Doudrop’s new alliance with Nikki A.S.H. Pairing Belair with Doudrop always gives Belair a chance to show off her strength, which she does on several spots including the KOD that finishes things.

Ah, but Lynch is nearby too, and she attacks right after the bell (lot of that going around tonight), smashing Bianca into a chair several times, punctuating with it by using Belair’s hair to sling her into the ringpost so that her face hits the chair which hits the post. Ouch.

As we head into the final hour of Raw, it’s time for the RK-Bro victory celebration. Randy Orton recalls that this is his 18th WrestleMania appearance, but could be the sweetest of all of them as he’s never been tag team champion at the time and never had a friend like Riddle who’s had his back. Since Riddle threw the party last time they won the belts, Orton wanted to return the favor this time, and even though his strength is not as a party planner, Riddle certainly appreciates his efforts. Did he tease getting Riddle some weed? We’ll never know, as the Street Profits head down to congratulate the tag team champs. They aren’t here to party, though, they’re here about business. On that note, they challenge RK-Bro to a match at WrestleMania, something Orton isn’t crazy about considering all the things they had to go through to regain the belts. The thing is, the Profits aren’t there to ask for an opportunity, they’re telling the champs what’s going to happen — which goes even worse, because Orton says no one, not even Vincent Kennedy McMahon tells him what to do. Riddle is forced to play peacemaker, pointing out that the Profits did beat them in a non-title match, so this is the right thing to do. After a short discussion, Orton accepts the Profits’ challenge, but Montez Ford says the next time they come to Duval, they’ll show RK-Bro how to throw a party that isn’t so … ass. That ticks off Riddle, who ends up challenging Ford to a singles match. Cool, bro.

So are the Profits going full heel for this rivalry leading up to Dallas? It’s certainly possible, given that Corey Graves is supporting them on commentary. Riddle provides plenty of tributes to his tag team partner in his offense, even trying for an RKO that is countered with an enzuigiri. He hits the RKO on his second try, but Alpha Academy is busy destroying Orton and then Riddle as well. The bell rings, but the former champs go lay out the Street Profits as well, with Otis hitting a splash off the middle ropes and Chad Gable following with his own aerial move. Guess this one is a no contest since the AA boys attacked both teams. And hey, what’s that smell? Triple Threat match at Mania? Could be, could be.

The announcers discuss how tough it is to say goodbye to the Bad Guy before a video package plays remembering his career. It’s well done, as is usually the case when WWE does these.

Was just going to comment on how there’s half an hour left for this main event, but more than 10 minutes of fooling around later, that’s no longer the case. Along with being fantastic in the ring, this narrative serves both men well: That a WrestleMania moment is worth any amount of machinations to achieve, and the sense of desperation when it gets close and you aren’t yet on the card. Owens flirts with getting counted out, and Rollins hits a top rope frog splash when he returns to the ring, but K.O. kicks out. “I need this Kevin,” yells Rollins before going for a superplex. Both men miss some high risk maneuvers, and Rollins seems to have Owens rolled up for three except the referee had to avoid getting hit, thus slowing down his count. Owens evades a Stomp and connects on a Stunner to get the victory.

And so we close Raw with Rollins in the same place we found him, staring vacantly into the distance as the realization that he has no spot at WrestleMania weighing heavily on his mind. Poetic, no? We’ll see you in seven!

Tonight’s show felt like it breezed by, which is a high compliment for a three-hour show, and I really enjoyed the storytelling with Kevin Owens and Seth Rollins. Plus, with Rollins coming up short in his attempt to steal the K.O. moment, that still leaves the door open for that other thing people have been hoping to see for Seth. Maybe next week will see that come to fruition.