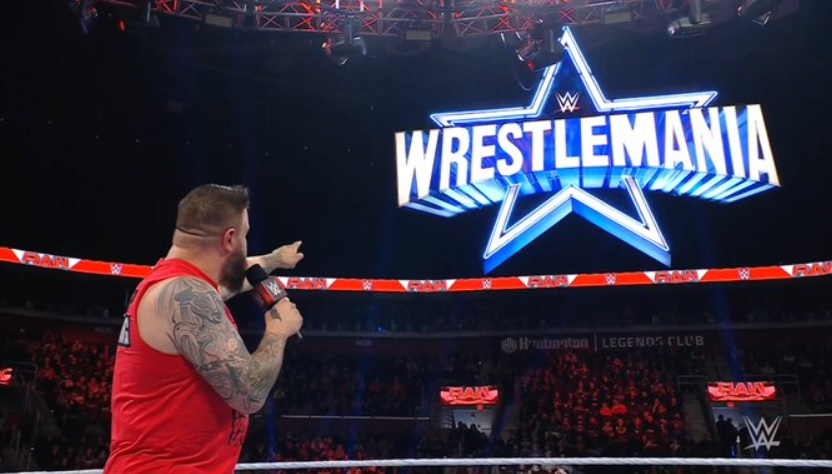 Superstars are scrambling. As the Road to WrestleMania winds through Cleveland tonight, anyone who doesn’t have a spot on the card for April 2-3 is trying to scheme a way to rectify that. Quite a few superstars will have a chance to pencil themselves in for Dallas tonight, which is reason enough to tune in. So let’s do exactly that, live on USA.

A Madison Square Garden house show is more than just a house show. So it should come as no surprise that this week’s episode of Raw starts with footage of Brock Lesnar and Roman Reigns going toe to toe at the Garden, a scrap that ended with Reigns wearing Lesnar out with a steel chair and the steps and demanding that Brock acknowledge him.

If there’s someone who’s more excited than the fans in attendance about Raw tonight, it’s Seth “Freakin'” Rollins. He and his best buddy Kevin Owens have had a rough year so far, but they’re thrilled at the chance they have to win the tag team titles tonight, which in turn means they’ll get to compete at WrestleMania. Well, thrilled about everything except competing in the “dump” known as Dallas, according to K.O. Something to keep in mind for, you know, later tonight. As Owens tells us other things that suck, including the Alpha Academy, the champs come out to retort. After all, the person who deserves to compete at WrestleMania the most is the one with the master’s degree, right? Oh, and there’s a third team in this angle as well, and RK-Bro does a backstage interview where Riddle vows not to let the stupendous journey with his bro Randy Orton come to an end. Someone’s about to be disappointed. Several someones, really.

Even though this is a triple threat match for the belts, it’s a little different than the way these things sometimes work. One man from all three teams can be in the ring at any one time, and you can only tag your own partner. There are still no DQs or count-outs, and one fall still wins it. The way Orton is running wild, it appears RK-Bro might be the squad that wins, especially after he and Riddle team to slam Otis off (not quite through) the announce table. Otis gets his revenge later, powerbombing both K.O. and Rollins while his partner is superplexing them. Yeah, the other way around would have been funnier, agreed. The announcers debate what will happen to the losing teams in tonight’s bout, noting that they could be “watching WrestleMania from home.” Like me. I’ll even order them food if they want (shout out to our sponsor, DoorDash). The finish comes somewhat suddenly despite increasing levels of chaos, and it’s RK-Bro who pulls off the victory. Riddle and Orton are clearly pumped, but Owens and Rollins look utterly defeated as they sit just outside the ropes. Great match, though, no question.

K.O. vs. Stone Cold Steve Austin rumors, please activate your next higher gear! He’s backstage now, still looking like I do when I’ve doubled down on 10 to get to 20 and the dealer draws to 21 after having 16 on two cards. Blackjack players, you know what I mean.

Tozawa got the kiss he’s been seeking from Tamina earlier today, so it remains to be seen if he’ll be any help from the floor or is just lovestruck. Brooke is in the Boston crab quite early on, which is suboptimal, to say the least. Somehow she wriggles free and leans back to pin Tamina’s shoulders to the mat, escaping with her title. Tozawa accuses Dana of cheating, saying the love of his life is the real winner. He expects another kiss but is flatly denied. The fans chant for her to reconsider, so she blows him one, and that satisfies him for now.

No, Kevin Patrick, Rollins doesn’t want to comment on how devastated he is about missing out on his WrestleMania moment. Come on, man.

It’s time for some hometown boys to get some microphone time. Namely, The Miz and Logan Paul, who has nothing but nice things to say about the city that raised him, so he’s not sticking to the typical heel playbook … for now. Miz’s beef with the Mysterios is two-fold: He thinks Dominik is only where he is because of nepotism, and he’s jealous of the fact that Rey is revered while he gets booed. Logan is certainly annoying, but he gets wrestling promos pretty well, I’d say. After bringing out Jerry “The King” Lawler, who proposes they do some WrestleMania right there in Cleveland, Miz reverts to his true colors, claiming that anyone who experiences even a little success gets the heck out of Cleveland as quickly as possible. He also runs down the local sports teams and gets the heck out of the ring, as the fans boo and Paul looks a little confused.

Patrick catches up with an enthusiastic Bron Breakker, who will team with Tommaso Ciampa to take on the Dirty Dogs once again tonight. And the Street Profits are asked about how it appears there is no place on the WrestleMania card for them. Montez Ford says there is time for them to sprinkle in some magic and make it into the show of shows, especially since they recently defeated the newly crowned tag team champs and feel like they are first in line for a title shot.

It’d be easy to make a joke here about Raw showing a video about Breakker before he makes his debut on Monday nights, but honestly, it’s nice that WWE isn’t assuming that viewers are automatically watching NXT 2.0. Also, props for not making this too much of a “can they coexist?” deal between Breakker and Ciampa, something WWE fairly takes some heat for on a semi-regular basis. Breakker gets the pinfall here too, which can’t be a bad thing for him.

After taking the ‘L,’ Ziggler warns Breakker that the second he turns his back to face Ciampa, he’ll strike and become NXT Champion.

OK, it seems we’ll be asking everyone who doesn’t already have a Mania match how they feel about not having a Mania match. Omos claims he will take his WrestleMania moment instead of waiting for it. We’ll see.

Uh, well, Omos wins pretty easily, as he’s been doing lately. What he really wants, it seems, is a showdown with Commander Azeez, though all he ends up doing is laughing, one big man to a slightly smaller but still large man.

As a video package reminds us, it’s hard to remember too many WrestleMania feuds that started as simultaneously violent and sudden as the one between Edge and AJ Styles. It’s perhaps not that surprising, then, that Edge receives a mixed reaction as he heads for the ring under drastically reduced lighting. “You think you know me?” Edge says, referencing his famous entrance theme, before speaking directly to Styles at home. In classic motivational heel fashion, Edge says he attacked AJ for his own good, because if they are going to wrestle in Dallas, he needs the best version of AJ. Edge says it also helped him, freeing his brain up a bit to be something it never has before, and it is a “me” Edge has fallen in love with. It’s given him a feeling of control, not just over his own career but over everything that will happen in the industry. Edge is standing on the mountain of omnipotence, and the view is … phenomenal.

Uh oh, K.O. has had an epiphany, one that he says will change his entire WrestleMania future. He’s not ready to share yet, saying he needs to iron out some details before revealing it later tonight.

Liv Morgan and Rhea Ripley vs. Queen Zelina and Carmella

Now here are some wrestlers with a direct path to Mania. If Morgan and Ripley win, they’ll be added to the tag team title match the first weekend of April. The logical thing is for them to win and get more women into the mix at the Showcase of the Immortals, but we’ll soon see. The bout turns into a 2-on-1 affair after Carmella loses her mask and goes over to be consoled by Corey Graves at the announce table. When she does, Zelina is no match for Morgan and Ripley, who pin her and win their shot at a WrestleMania moment.

I … don’t think there was supposed to be a commercial there, because it cuts off the video package announcing Vader is in this year’s Hall of Fame class. It was already announced, but still.

Even though he’s in a match against a current champion, most of the announcer chatter during this match is about Theory’s WrestleMania feud with Pat McAfee. I also don’t get to see most of the match because the commercials are definitely off-schedule now and run during the action. Ah, but Balor has his own storyline going, which intrudes here as he gets assaulted by Damian Priest. Balor wins in record terms but he’s not feeling like a winner right now, one would imagine. Theory hits his finisher on the already beaten up Balor and takes a “victory” selfie afterward.

Wow, they really played the clip from last week of Bianca Belair hair whipping Becky Lynch just so everyone could hear the audio again. Respect. She vows to walk out of WrestleMania with the Raw Women’s Championship.

We’re almost out of time, which means we’ll need to hear from K.O. before calling it a night. He says his backup plan for WrestleMania is to have the most stupendous K.O. Show of all time. He’ll need a lowlife from Texas to be his guest, though, and he quickly rules out JBL, Booker T and Shawn Michaels. Who does that leave? Well he calls the person a broken down shell of his former self living on past glories. The beer and the knee braces are a big clue. Yep, it’s Stone Cold Steve Austin alright, with Owens looking forward to giving him a Stunner and pouring a glass of milk over him. K.O. doesn’t think Austin has the guts, but that’s not something he’s ever lacked, so … the announce team seems incredulous, but there’s already a graphic showing Austin with a question mark.

Will we get the answer to Owens’ challenge next week? We’ll see you in seven and find out together!

Nothing spectacular, though the tag team match was superb. It was also fun to see it early on and necessary to set up Owens’ not so secret reveal at the end of the night, though nothing that followed lived up to the high bar it set. Still an entertaining show, all things considered.