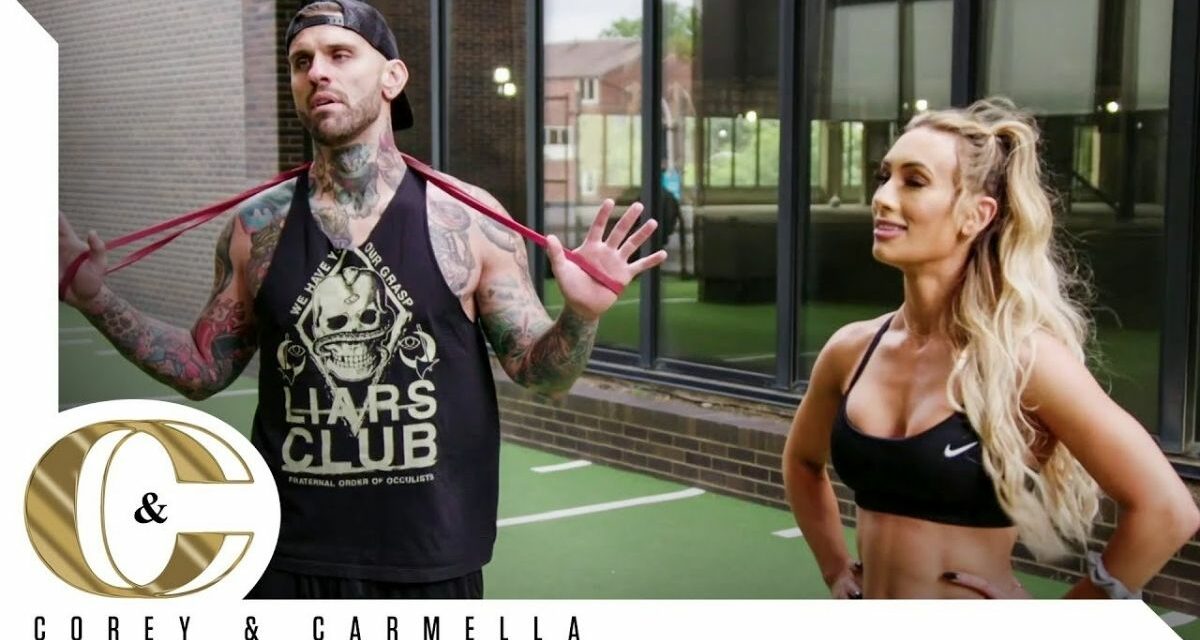 We’re back for another! WWE’s Corey & Carmella has dropped its third episode on March 1, 2022. Corey went out of town for Monday Night Raw leaving his girlfriend, Carmella, to decorate their new home.

Given where we left off in episode two, Corey wants Carmella to install some of his art where he could admire them. And that’s what she’s going to do… as unchaotic as possible. “When it comes to designing, Corey doesn’t know what his talking about,” mocked Carmella. She wants the house to feel like a home rather than a “bachelor pad,” saying that his art and photos don’t go with the aesthetic of the building. So what does she do? Dumps them in the basement. Bravo! That’s going to come back and chomp her ass. Maybe.

So, when Corey comes home after his shift at the WWE stadium, he finds the house fully decorated with none of his stuff. But all isn’t lost because Corey is thinking of turning the basement into a studio or a mancave. He goes to look for Carmella, so he could embrace her, yet he stumbles on her having a less than positive conversation with her sister, Breanna Van Dale, who is a nurse, and eavesdrops. Corey believes she’s having second thoughts about the move, and it frightens him.

The meat of the conversation with Breanna was that Carmella was stressing over her wine business, named Capa Cagna, which translates to ‘Boss B*tch’ in Italian, what to have for dinner and unpacking boxes. They mention during their podcast Bare With Us about their three tenants: honesty, communication and sexual activities.

They focused on communication because there were times when Corey doesn’t say what’s on his mind in that moment. To better a relationship communication is always key. So, he later decides to spend time with her at the gym as she’s training, which is something he doesn’t normally do. Aw, sweet. Until he says he overheard her conversation… This was an 11 minute episode. Enjoy!

In episode four, titled “Carmella embarrasses Corey at the gym,” she questions why Corey was eavesdropping. She reassures him that it has nothing to do with him and more about the rebranding and design of her wine. We almost see Corey’s butt cheeks because Carmella felt the need to peek.

We arrive at the gym, and Carmella notes on Corey’s every workout move having him reply that she likes to comment on everything he does. He doesn’t have to worry about staying in shape because he has a job that doesn’t require that while Carmella does, but they always find a comprise when it comes to different flavors.

The way Carmella embarrasses Corey was shown through her strong ability to keep up during training, he grew a newfound respect as he watches his girlfriend use her muscles. Carmella pretty much trampled him hard like a herd of caribou.

The rest of the episode brings Corey’s kids to their home over the weekend. Time to go parent mode. Carmella likes being a “bonus Mom”, but she lets the kids see she’s not trying to be their Mom. Looking for a big enough house was important to her, so there would be space for the children. Corey didn’t have any kind of expectation as to how she’d react, but Carmella stepped up and did it flawlessly.

During breakfast, Corey was so sure that this turner-looking spoon was a spatula. It had holes like it should. Oh well… “I don’t care what the name of it is, as long as it does the job.” That’s what she said.

This one photo of Corey when he used to wrestle, he had long hair, but what shocked me was his beard. It looked like a comma or an apostrophe punctuation. Am I the only one?

Episode five, titled “Carmella’s dad surprises her at a house party,” aired on March 3. Fun! Corey prepared this surprise for Carmella unaware that he’ll be receiving one in return as they host a house-warming celebration.

Knowing how close Carmella is to her sister, Mom and Dad, she hates not having them around more often. She had to adjust to her boyfriend’s world by moving to Pittsburgh, and it weighs on her. Carmella finds herself alone at times as Corey’s friends bask in the ambience of the night.

Knock knock. Carmella’s dad, Paul Van Dale, is a former WWE enhancement wrestler and having him there made her happy. Although, Mr. Van Dale had a bit too much bourbon to start dressing like a poor imitation of Elvis. I guessed his disguise not knowing at all who he was only to be right afterwards. I laughed.

Psst! There have been plenty of hints throughout this episode of tying the knot, so we see Corey being old-fashioned and ask Carmella’s dad for his daughter’s hand in marriage. He didn’t propose in this one; we’ll have to wait and see. Unless you want to spoil yourself by using the internet.

I’ll sit here waiting for the next banger episode.

TOP PHOTO: Corey and Carmella at the gym in episode four