NWA POWERRR: Mayweather goes on a PowerrrTrip to get the NWA National Title from Adonis 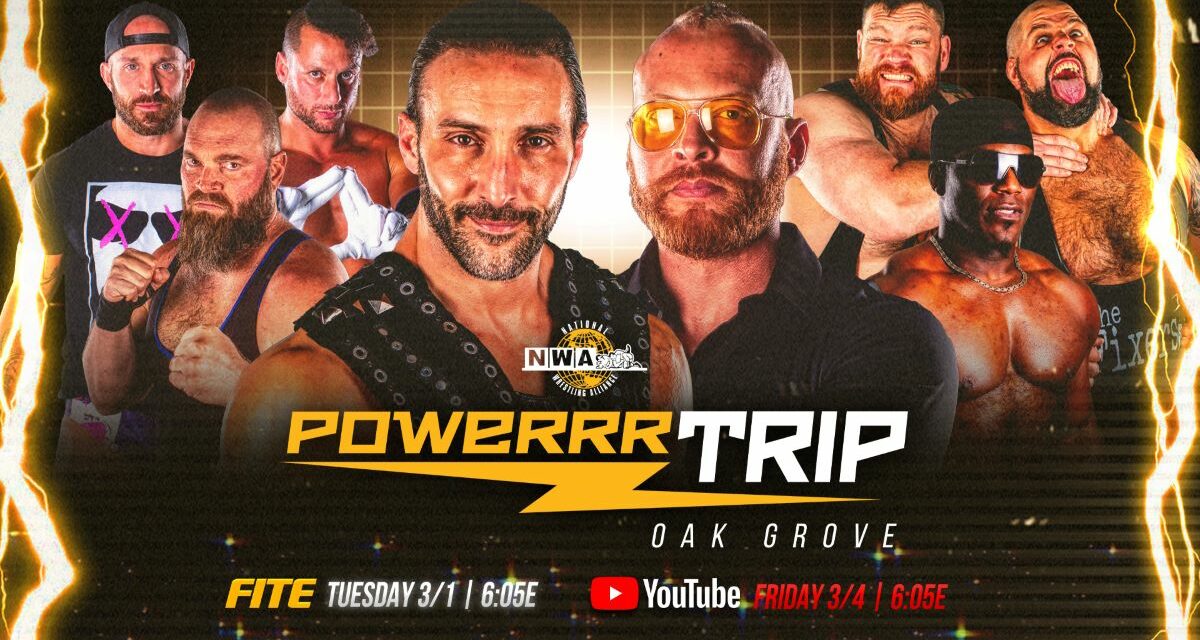 The man formerly known as Crimson has been in something of a slump of late, and has yet to find his winning ways. Tonight might be the night to recapture that glory, as he faces Chris Adonis for a chance at the NWA National title. Can Mayweather push all his issues with Jax Dane to the wayside and focus on the prestigious title, or will Adonis get the Masterlock on Mayweather, and leave him a former shadow of his self?

We’ll find out as we head to Valor Hall in Oak Grove, KY for the second part of this POWERRRTrip. Your commentators Joe Galli, Tim Storm, and Velvet Sky have the call.

We go to a cold open, as Galli is in the ring with The Fixers, Jay Bradley and “Wrecking Ball” Legurtsky. “The Boss” Bradley talks on how this is a no DQ match, and he and Legurtsky are ready to send Matt Taven and Mike Bennet packing back up to Baltimore (ouch!). As fans chant for The OGK. Bradley assures us that their time in the NWA is over for those nerds. Legurtsky goes full Ogre and yells, “Nerdddds!!”

(Note to Hollywood: When you get the chance to remake the cinema masterpiece that is Revenge of the Nerds”, may I recommend your first casting of the role of “Ogre” that Donald Gibb inhabited so well be Wrecking Ball Legurtsky?  Call me so we can talk!)

In any case, time to get to the First Match of the night between… 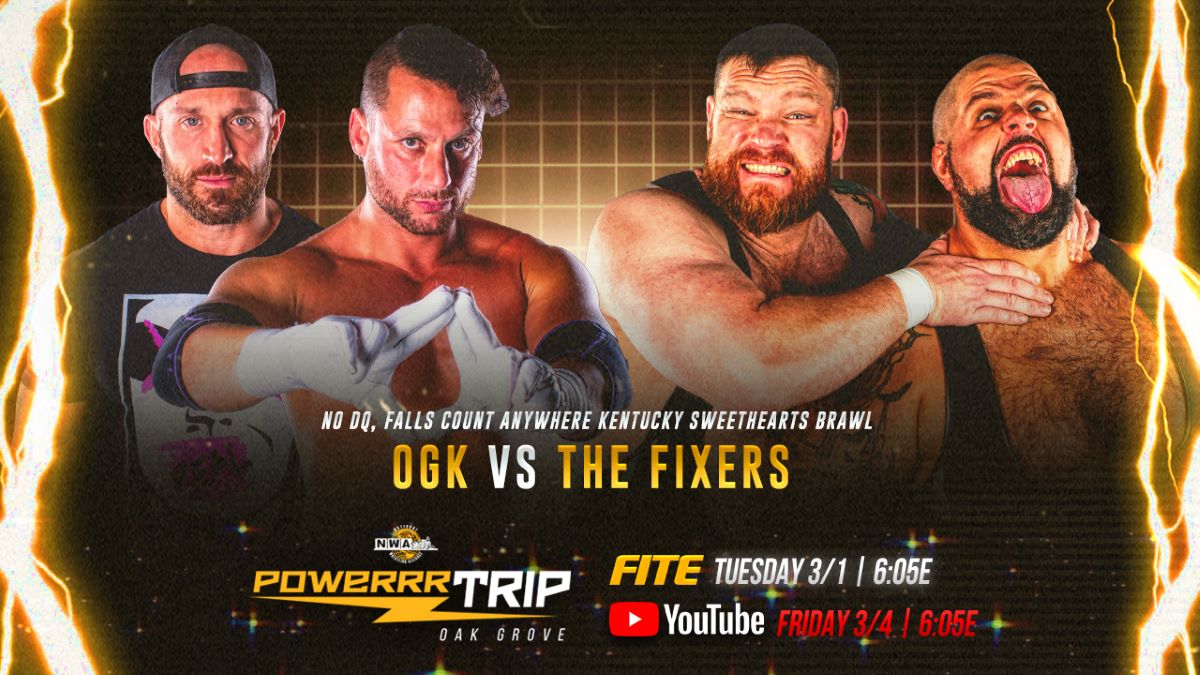 The OGK (Matt Taven and Mike Bennett) vs. The Fixers (Jay Bradley and “Wrecking Ball” Legurtsky)

Valor Hall is chanting strong for “OGK”, but before the mayhem starts, NWA Owner William Patrick Corgan comes out. He was so impressed by the entrance of both men and because the Crockett Cup is just around the corner with both teams seeded in the first match, he decides to treat the fans with an early Round One match for the Cup between the two teams tonight. Oh, and this match is now going to be contested under the rules. Bradley and Legurtsky protest, and while the senior referee Robert King pulls away all sorts of weapons, including…a Barbie doll from Bradley’s trunks?!

Again, there are things in pro-wrestling I would like to remain happily ignorant. This is another one of those things.

As the bell rings, it is a complete cluster in the squared circle, but The OGK comes back with stereo dropkick, and Taven and Bennett take firm control over Legurtsky. The OGK step up their efforts with double team moves, but can’t knock the big man down. Bennet tries with a drop toe hold, but an elbow by Taven to the back of Legurtsky’s head drops the “Wrecking Ball” to the mat. Bradley tries to save his partner, but gets sent to the outside for his trouble. Taven goes for a crossbody, but gets caught by Legurtsky, who unceremoniously drops him on Bennett’s back. The Fixers utilize their double team moves, thus making Mike a Bennett in Peril. The Fixers set up a nice body slam to stereo head-butts for a pin cover, but Taven breaks the count. The OGK are collecting themselves on the outside, and Bradley tells Legurtsky to dive onto Taven and Bennett. Legurtsky hits the ropes, and then…psyche! He stops and Bradley barrels through the OGK on the outside. Classic. Back to the double team, The Fixers channel the Dudley Boyz, as they do a modified “Wassup” drop, as Taven lands on Bennett’s…err, little Kingdoms. As the Fixers try to put away Bennett, he gets a discus forearm to Bradley to knock him loopy. Bradley tags in Legurtsky, but another discus forearm to the Wrecking Ball gives Bennett the space needed to get the hot tag to Taven, and he is a Kingdom en Fuego as he cleans house on The Fixers. As Legurtsky gets isolated, Taven does everything to stomp the big man, including a neckbreaker and a kick punt, but he can’t put Legurtsky away. Taven goes up top, but Bradley distracts Taven enough for Legurtsky to go for a powerbomb, but Taven gets a sunset flip to a pin for a close two count. Bradley goes after Taven, but an elbow and a spear by Bennet neutralizes “The Boss.” Taven and Bennet go for a spike piledriver to Legurtsky, but Bradley shoves Taven off the top turnbuckle, and he gets crotched on the top rope. With Bennett isolated again, The Fixers do a double powerbomb, then get his partner and deliver a double brain buster to Taven and that gets the pin and that means…

Your Winners via Pinfall, and Advancing in the Crockett Cup: The Fixers

We get a video package of Matt Cardona and Mike Knox slamming Pope to the steel steps at the Hard Times PPV, and Pope giving the Uncertainty speech afterwards (which, if you missed, you can catch up here), and Pope is definite pissed off. He’s cleared from his concussion and he’s focused to cause some hurting in the next match of the night, which is a … 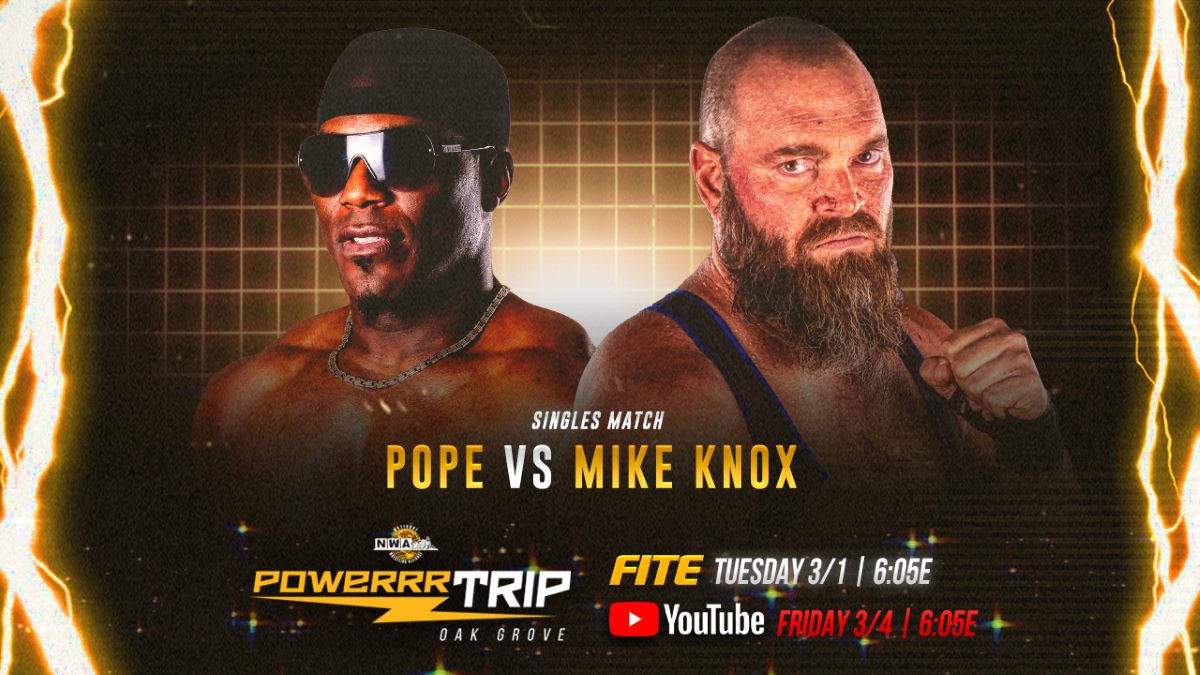 Pope is all business tonight and just runs right at Knox like a house of fire, and rams him in the corner, punishing the big man with chops, sending the big man to the outside. Knox starts to walk away to the back, but Pope catches up to him, ramming him into the barricades. Pope gets steel steps ready for payback, but Knox stops him from accomplishing that. He tries to ram Pope’s head to the apron edge, but Pope reverses and then sends him back in the ring. Pope gets Knox in the corner and he delivers a splash not once, not twice, but three times. Pope goes to the ropes, but Knox answers back with a running crossbody that crashes down on Pope, making him land hard on his head and neck. The match starts to favor Knox, but Pope running on emotion. Outside the ring, Knox and Pope battle on, with Pope getting a wooden chair, but Knox slaps the chair out of his hands send him back in the ring. There are elbow drops by Knox to Pope’s prone body, as he becomes methodical in dismantling Pope. Pope attempts a rally by punching into Knox’s midsection, but the big man answers with a spinning uranage to cover for a two count. Knox goes for a leg drop, and covers for another two count.

Knox gets frustrated and rips the top turnbuckle pad to expose the steel bolt. As the ref tries to stop this and replace the pad, Pope gets his second wind and kicks at his legs to bring him down. A step up enzugiri finally brings Knox crashing to the mat. Pope grabs outside to the timekeepers table, and grabs a roll of tape. He gives Knox a short DDT, and then tapes up his fist, and slugs away. Pope delivers elbow drops three times to Knox, and drop his knee pads to set up the Elijah Express, but Knox gets a boot up, slams Pope to the exposed turnbuckle, then gets a running hip attack that sees Pope’s head bounces back hard, and he is out, as Knox covers for the win.

Your Winner via Pinfall: Mike Knox

We go to recaps of NWA USA, but I’d suggest you check out the recap here to see what you missed, and then go to YouTube (or watch the show and then come back.  But, it would be cooler if you read the recap first…)

But let’s get to the Main Event, and it’s a title fight for the… 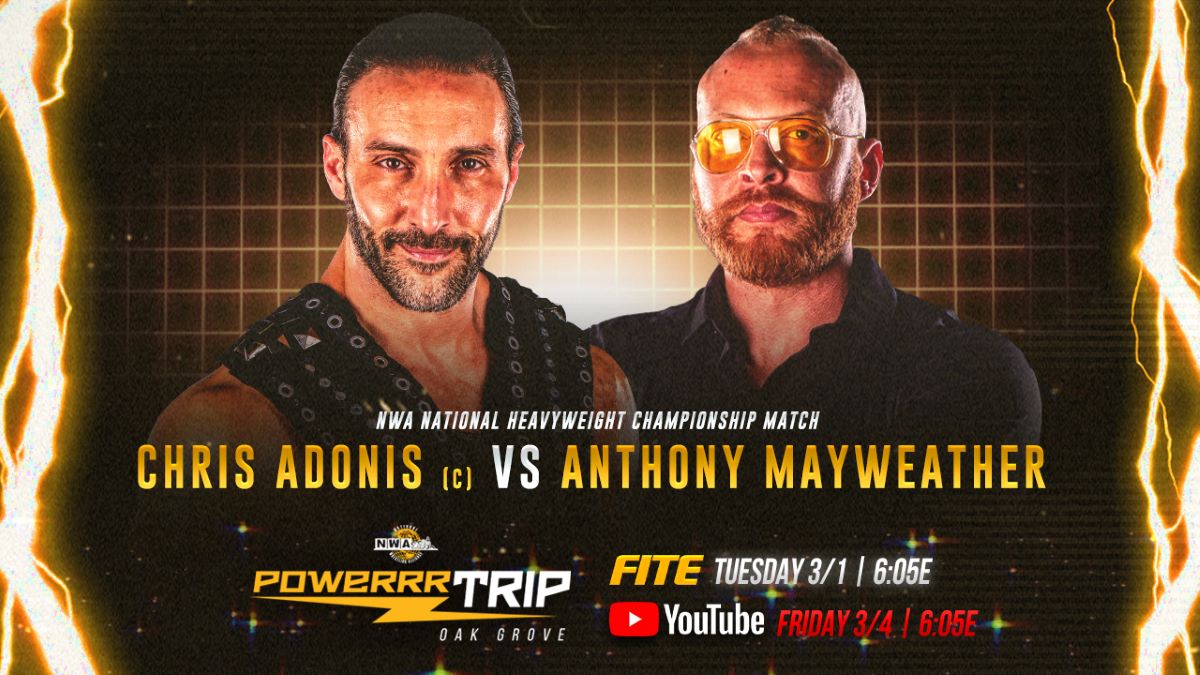 As the fans chant for the wrestler formerly known as “Crimson”, he is a study of focus and determination, while Adonis comes out sans Strictly Business members. After Kyle Davis gives the boxing style intros to the hot crowd at Valor Hall, the start of the match has Adonis overpowering Mayweather. He struts for a bit, and as Mayweather attempts another collar and elbow, the same result occurs. Mayweather starts to get upset, and he redoubles his efforts, but a shoulder tackle by Adonis stop that. As Adonis hits the ropes, Mayweather comes back with arm drags that leave the champ reeling and going to the outside of the ring to catch his breath. Adonis calls for a timeout, and some rowdy fans with beer in their hands start to get in the mug of the champ. Adonis gets in the fans face, but Mayweather comes out to ram to barricades, slapping hands with the fans and family who are at ringside.

Back in the ring, Adonis asks for handshake, and Mayweather reciprocates with forearms to his head. Mayweather sends Adonis to the corner turnbuckles and tries to follow up, but the champ ducks, and Mayweather is stunned as Adonis is back in control. Mayweather fights out, and both double clothesline knocks out both men. As they struggle to get back to their feet, Mayweather rushes gets some nice Polish hammers in. He follows with a big elbow to Adonis’ sternum for a two count. Mayweather goes to a fireman’s carry, but Adonis gets a poke in the eyes and goes for the dreaded Masterlock, but Mayweather fights it off. However, Adonis gets a spinebuster that leaves the challenger stunned, and Adonis stalks for the Masterlock, and tries to get it locked in, but Mayweather sends him to outside. Adonis goes for the Masterlock submission again, and finally cinches it in. Mayweather starts to fade, but he find the strength to stave off the Masterlock, and he pushes off the corner and manages to roll up Adonis for one, two…three! He got it!!

As the show fades with the new Nation al Champion, we get a video promo on the burgeoning feud between the upstart Matt Cardona and Trevor Murdoch, setting up a showdown for the Ten Pounds of Gold on the final POWERRRTrip next week, as the show goes to the credits.

The Main event with Adonis and Mayweather the icing on the cake on the second part of the PowerrrTrip, but the rest of the card was solid on it’s own.  I hope this isn’t the last time we see the OGK in the NWA, and I definitely want Pope to get some comeuppance with Knox (and Cardona to an extent) in the future.

For now, enjoy your new National Champ.  Also, next week’s final PowerrrTrip is for what we’ve all been dying to see.