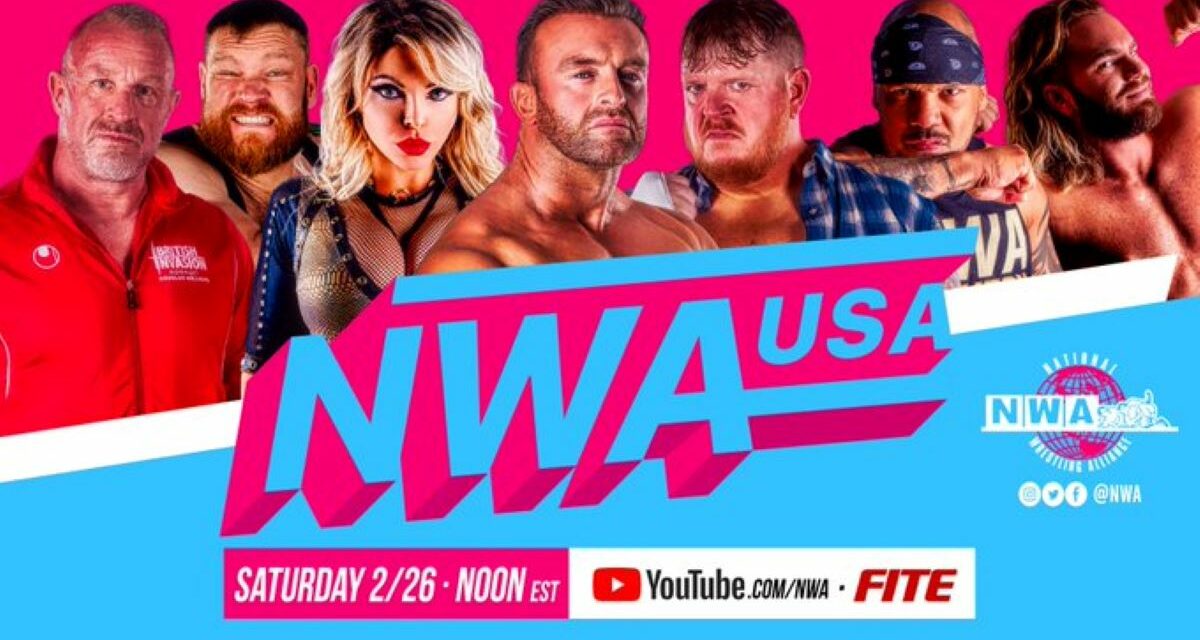 As great as Saturday morning cartoons, it’s time for NWA USA on YouTube.  This show has some guest coming in like Natalia Markova, Austin, Idol, Nick Aldis, and the Trevor Murdoch.  But it has two matches with Homicide and Alex Taylor in action, and a sleeper match between Jay Bradley of The Fixers, facing one half of The British Invasion, Doug Williams.

We go to a cold open with May Valentine with The Ambassador of British Wrestling himself, Doug Williams. After thirty years, he says it’s great to be in the National Wrestling Alliance representing British Wrestling. Williams also notes in anticipation of tonight’s event that he knows Bradley and has trained him in the past.  He says he is looking forward to getting in the ring with him.

We head to the GPB Studios in Atlanta, GA.  On commentary is my (and yours) favorite announce team of Joe Galli, Tim Storm, and Velvet Sky have the call.

We go to Kyle Davis at The Podium, and his guest is Natalia Markova. As Russian Randy Orton ™ speaks, she states she wants a match against Kamille.  At that moment, May Valentine comes out and slaps the Russian out of her.

Maybe Valentine is fed up with her, or maybe geopolitical relations between Markova’s country and Ukraine has come into the squared circle.  Who knows?   At that point, Raven steps in and tells “Fatty” Kyle Davis to leave, but then the Co-Talent Director Madusa step into the picture and tells Raven to get out.

Two things:  First, I hesitate to criticize Valentine on anything in the future (her books or otherwise), and second, I would fare better back talking Raven than I would Madusa.  The future is female, ladies and gentlemen.

But let’s get to the First match of the night… 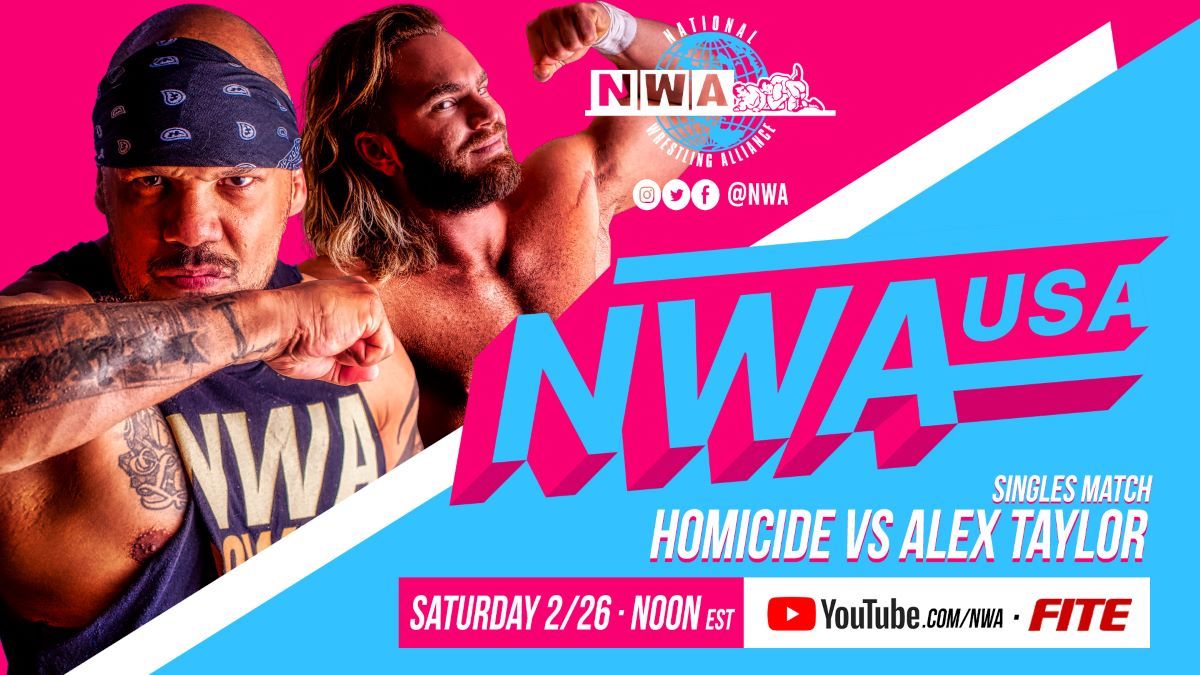 Homicide is super focused heading into the NWA Junior Heavyweight tournament at The Crockett Cup, but the Ill-Begotten member Taylor is no slouch.  An overhead belly to belly suplex by Homicide gets two count.  He follows with the Three Amigos suplex combo, but still gets a two count.  Taylor is rocked, but he catches Homicide off guard and nails a falcon arrow, but he gets a two count.  Homicide is dazed, and Taylor goes up top for a dropkick, but Homicide side steps. Knowing he needs to put away the upstart, he gets Taylor in an avalanche Koji cutter, and that’s enough to secure the pin and get the win.

Your Winner via Pinfall:  Homicide

There is a recap of NWA POWERRR, but you should subscribe to FITE, or go to YouTube on Friday, or just read up here on what you missed.

Back at The Podium it’s Nick Aldis, Trevor Murdoch, and Austin Idol.  Idol talks to the former champ Aldis, asks who was in his corner the first time he won the belt (Spoiler Alert:  It was Idol).  He tells Idol he should come join IdolMania Sports Entertainment.  Aldis jumps in and gives props to the current NWA Heavyweight Champion, Trevor Murdoch (I know a lot has happened.  Don’t @ me!)

However, he and Murdoch were talking seriously before coming out, and Aldis can’t help but notice that IdolMania is on hard times (clever pun). With that, he announce a GoFundMe page to help fund IdolMania in these dire circumstances.  Best line is when Aldis says for just a dollar, we can get a couple of phone books for BLK Jeez to stand on.

It was a dumb segment, but I got a chuckle out of it. 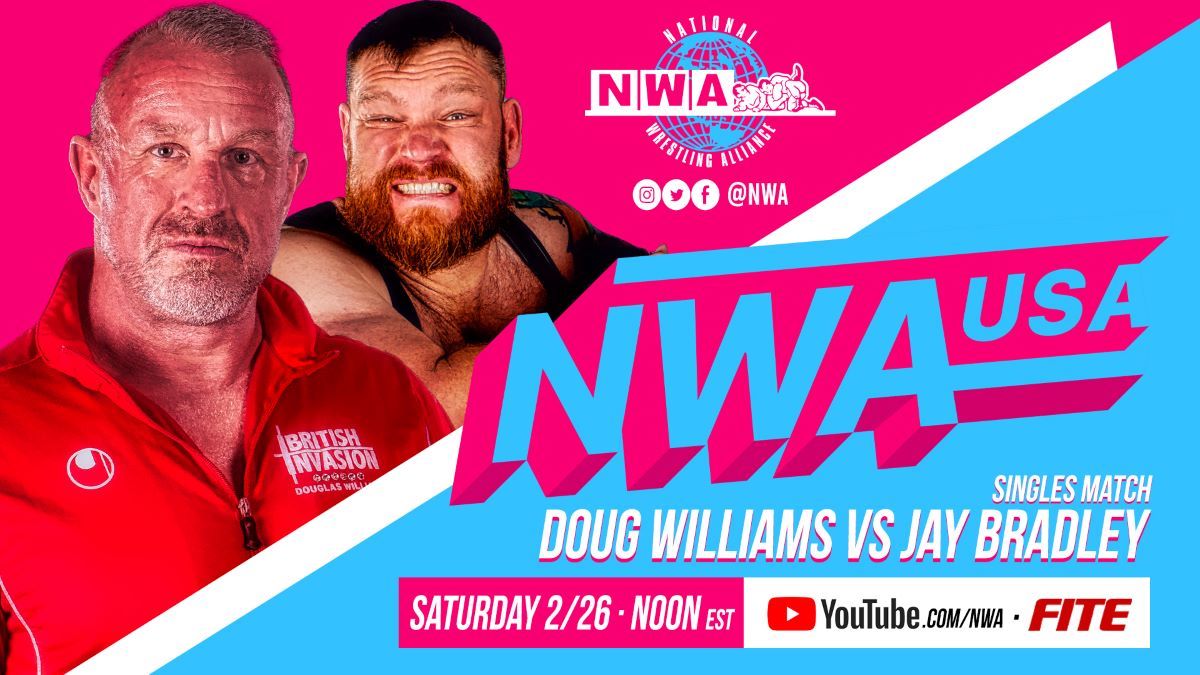 Bradley an imposing force, but Williams is technically sound in the catch wrestling of Great Britain.  As the bell rings, Williams uses his moves to get quick pins, but Bradley utilized brute force to his advantage.  Bradley gets Williams to his knees with a Greco Roman knuckle lock, but Williams kicks out, and gets a double wrist lock takedown with a splash on the arm, taking away Bradley’s offense.

Williams knocks him out of the ring, but Bradley catches his foot and drags him to the outside.  He and Legurtsky try some double teaming, but Williams gets out of the way.  As he climbs back to the ring, Legurtsky grabs his foot again, and that’s enough distraction for Bradley to come from behind to take advantage.  Bradley pummels Williams with elbows to the bridge of his nose, and a backbreaker cover, but gets a two count.  Williams fires back with European uppercuts, but Bradley slams him hard to mat, and he goes to the middle turnbuckle and gets a Vader bomb to a leaping elbow, but Williams gets a hand on the ropes to stop the count.  Bradley tries to grab all his limbs to cover, but Williams kicks out.

Williams fights back, but Bradley gets him in a sleeper hold.  There’s no quit in Williams, as he powers out and gets in a flying European uppercut to the big man, and whips Bradley to the corner, connecting with clotheslines.  Williams hits an impressive exploder suplex on almost 300-pound Bradley but gets a two count.  Williams attempts the Chaos Theory finisher, but Bradley pushes him off.  Williams goes to his catch wrestling toolbox, focusing on the injured arm of Bradley, and gets hammerlock to a chancery submission, but Legurtsky distracts once again from the outside.  That’s enough for Bradley to get Williams in a massive spinebuster to cover, but The Ambassador kicks out at two.  Legurtsky gets on the ring Apron, but Williams shoves Bradley to his Fixer tag partner to knock him off the mat, and he uses the momentum to hit a rolling German suplex with a deep bridge, and the ref counts the pin in one, two, and three!

Your Winner via Pinfall:  Doug Williams

The Ambassador stand tall in the ring, to the delight of the fans in attendance as the show goes to credits.

There is a reason Doug Williams is The Ambassador, and this match highlights that against the much larger Jay Bradley.  the rest of the show was okay, and the throwaway segment with Aldis, Murdoch, and Idol was funny by itself.  But this Main Event truly belongs to Williams and Bradley.

Until then, See you in seven!