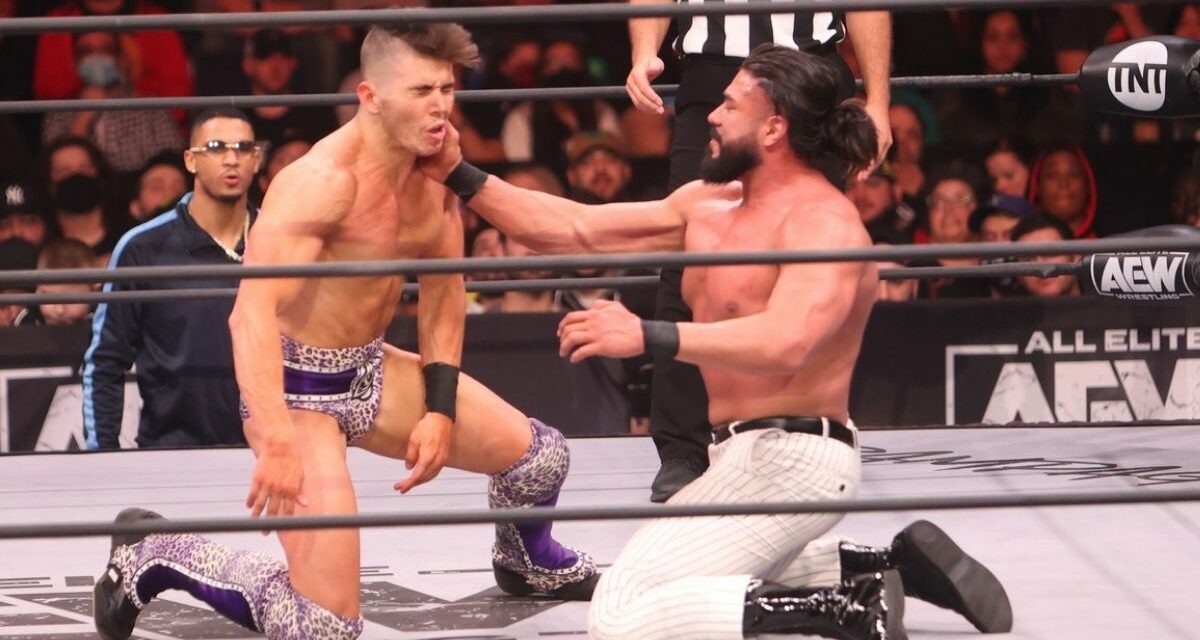 It’s Friday night, and you know what that means? No, not to search for the meaning of life on Reddit, nor plan trips to Ukraine.  It’s time for AEW Rampage, and it’s another jam-packed episode with another Face of the Revolution qualifying match between Anthony Bowens of The Acclaimed and the King of Sloth Style, Orange Cassidy.  Who will be the final entrant for the Revolution PPV?

We’ll find out later tonight, and we are coming to you from the Webster Bank Arena in Bridgeport, CT.  Your commentators Excalibur, Chris Jericho, and Taz have the call, and they get right to the ring, where it’s the First Match of the night, and it’s a title match for the …

Jericho notes this is the first title shot Ídolo has been granted since arriving in All Elite, and he aims to take advantage.  The start of the match has Ídolo give a hard shove to Guevara, and he respond with a takedown to rain punches.  Ídolo is shaken up, but comes up and offers a handshake, and Guevara says he’s number one with his middle…err, Guevara.  The early minutes of the match favor the Spanish God, as he gets a Spanish Fly, but gains a one count on El Ídolo.  He goes up the top turnbuckle for a superplex, but Guevara shoves Ídolo off.  Guevara goes for his springboard cutter, but Ídolo catches him, mid spring and pushes him off the ropes and Guevara crashes hard into the barricade.

On the outside of the ring during Picture in Picture, Ídolo causes more damage to the Spanish God, with a snap suplex to the entrance ramp has Guevara writhing in pain.  In the ring, Ídolo channels the spirit of Eddie Guerrero, and goes for the Three Amigos suplex, but Guevara blocks on suplex numero tres, and traps Ídolo in a pin attempt for a two count.  Ídolo tries a knee strike, but Guevara collapses, and Ídolo crashes to the floor. Guevara goes for a tornillo to land on Ídolo on the outside of the ring.  Guevara goes up top, goes for the 450 splash and misses, and Ídolo comes back with a big boot, sending Sammy into the rope.  Ídolo gets in his own unique offense with a rope assisted pendulum DDT that has Guevara crashing hard into the ring apron.

Ídolo goes up the top turnbuckle, but Guevara catches him with a leaping enzugiri, and he climbs up top and delivers an avalanche Spanish Fly, but cannot capitalize as the move has wiped him out.  Jericho notes on commentary that it’s a hockey fight as Ídolo and Guevara trade punches, and both men collapse again.  Ídolo gets up and goes to remove the turnbuckle pad off, but ref admonishes him, all the while Jose is removing the turnbuckle pad on the opposite side. Ídolo gets Guevara worked over, and then takes him up top to attempt the El Ídolo hammerlock DDT, but Guevara escapes and kicks his feet out to get nailed with the exposed turnbuckle. From there, The Spanish God returns up top and nails the springboard cutter, and gets the win. 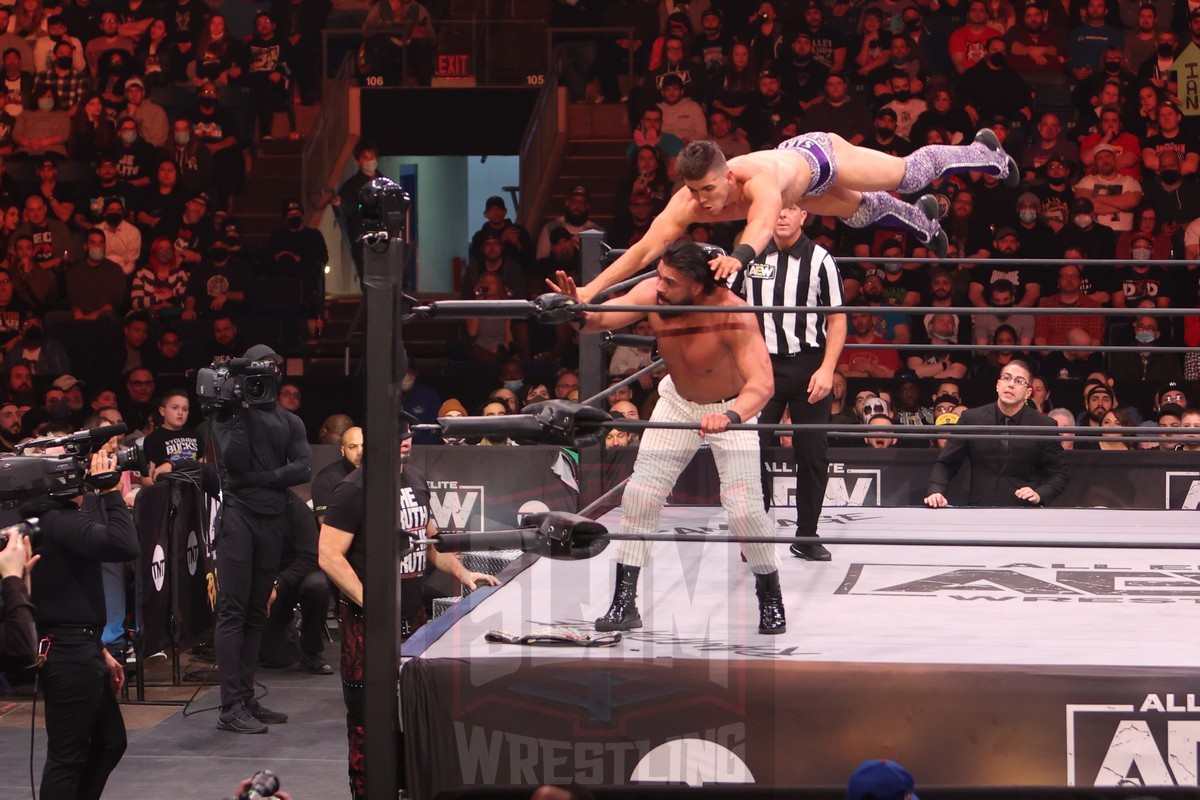 Your Winner via Pinfall, and Still TNT Champion:  Sammy Guevara

After the match, Matt Hardy and company swarm the ring and beat down Guevara, but like a rocket Darby Allin jets out from backstage and, in one smooth motion, dives in the ring and drills Hardy with a tope suicida. Kassidy is the ring starts to back off, and runs backwards into Sting.  Kassidy does want anything to do with the Icon, but it’s enough to distract the Private Party member as Allin knocks him down and gets the Coffin Drop.  Guevara, Sting, And Allin stand tall and celebrate in the ring with the fans, as Ídolo and company head back, licking their wounds. 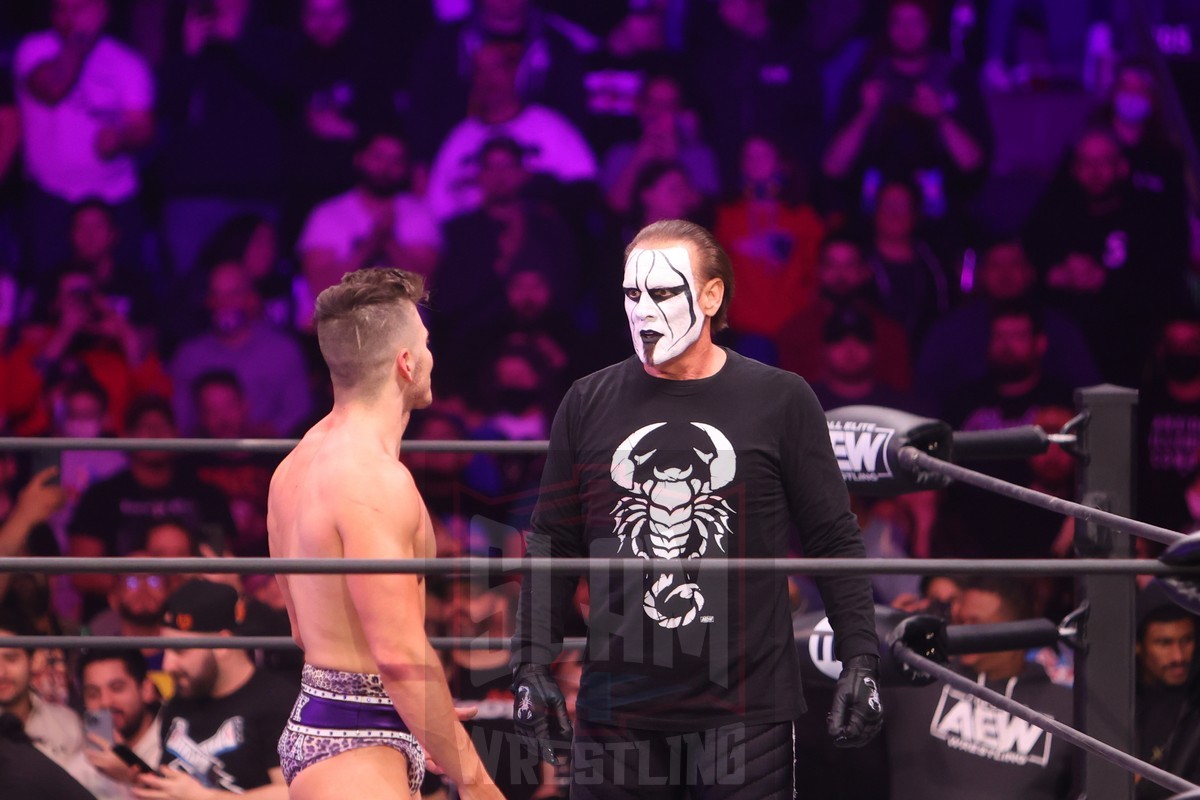 Sammy Guevara and Sting share a moment at AEW Rampage, at the Webster Bank Arena, in Bridgeport, CT, taped on Wednesday, February 23, 2022, and airing on Friday, February 25, 2022. Photo by George Tahinos, https://georgetahinos.smugmug.com

QT Marshall comes out, asking when the disrespect will end. He then addresses Taz, asking why his son Hook has no respect. Marshall is tired of this, and demands Hook comes out.  The Action Bronson music hits, and he obliges, but Marshall had this as a ruse for him to get The Factory student to attack, one at a time, and he just eliminates without breaking a sweat.  Marshall tells one student to get him, and that student is the smartest of the bunch by backing off.  Therefore, the disrespect of QT Marshall continues on.   Now, play that Action Bronson music. 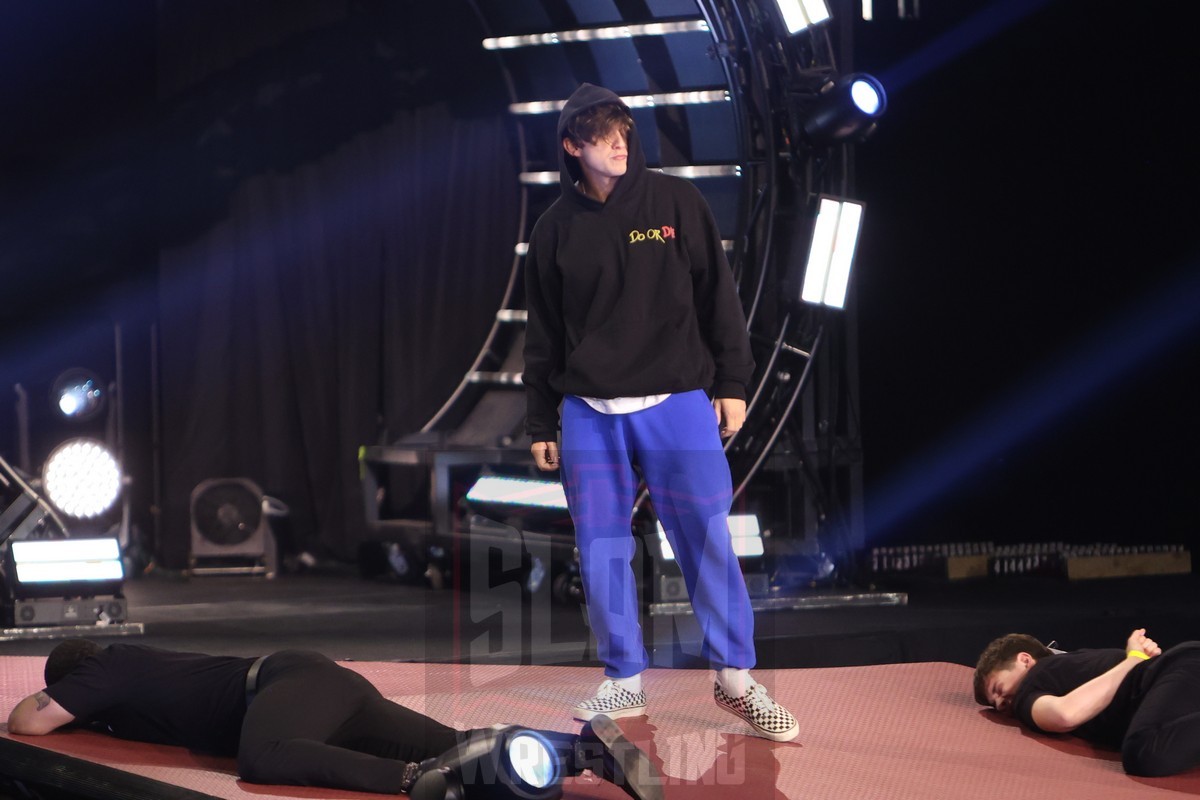 Hook and the destroyed security at AEW Rampage, at the Webster Bank Arena, in Bridgeport, CT, taped on Wednesday, February 23, 2022, and airing on Friday, February 25, 2022. Photo by George Tahinos, https://georgetahinos.smugmug.com

Dan Lambert, Ethan Page, and Scorpio Sky are backstage. Lambert says he’s talked to Tony Khan and he promises Sky he’ll get a title match.  Sky is getting tired of this, but Page reassures him that Lambert has their back, and gets them more opportunities than they ever had.

I guess that there was more to that, but I’ll be damned if I know what it was.

And now for something that shoulda belonged on AEW DARK, here’s…

Wardlow (with Shawn Spears) vs. Nick Comoroto (with Aaron Solow)

Quick poll:  Am I the only one that thinks Comoroto looks like a latter day Hercules Hernandez?

Well, in any case this match, to quote Todd Keneley, is entering the land of the big uglies.  Oh, and yes folks; you can smell what this squash match is cooking.  Since I do not recap squash matches, enjoy this Fast Summer Squash Sauté recipe, which the preparation will be faster than this match.

The end has Wardlow deliver powerbomb symphony, according to Excalibur, and Comoroto felt the Sturm und Drang as Wardlow gets the boot for the merciful end. 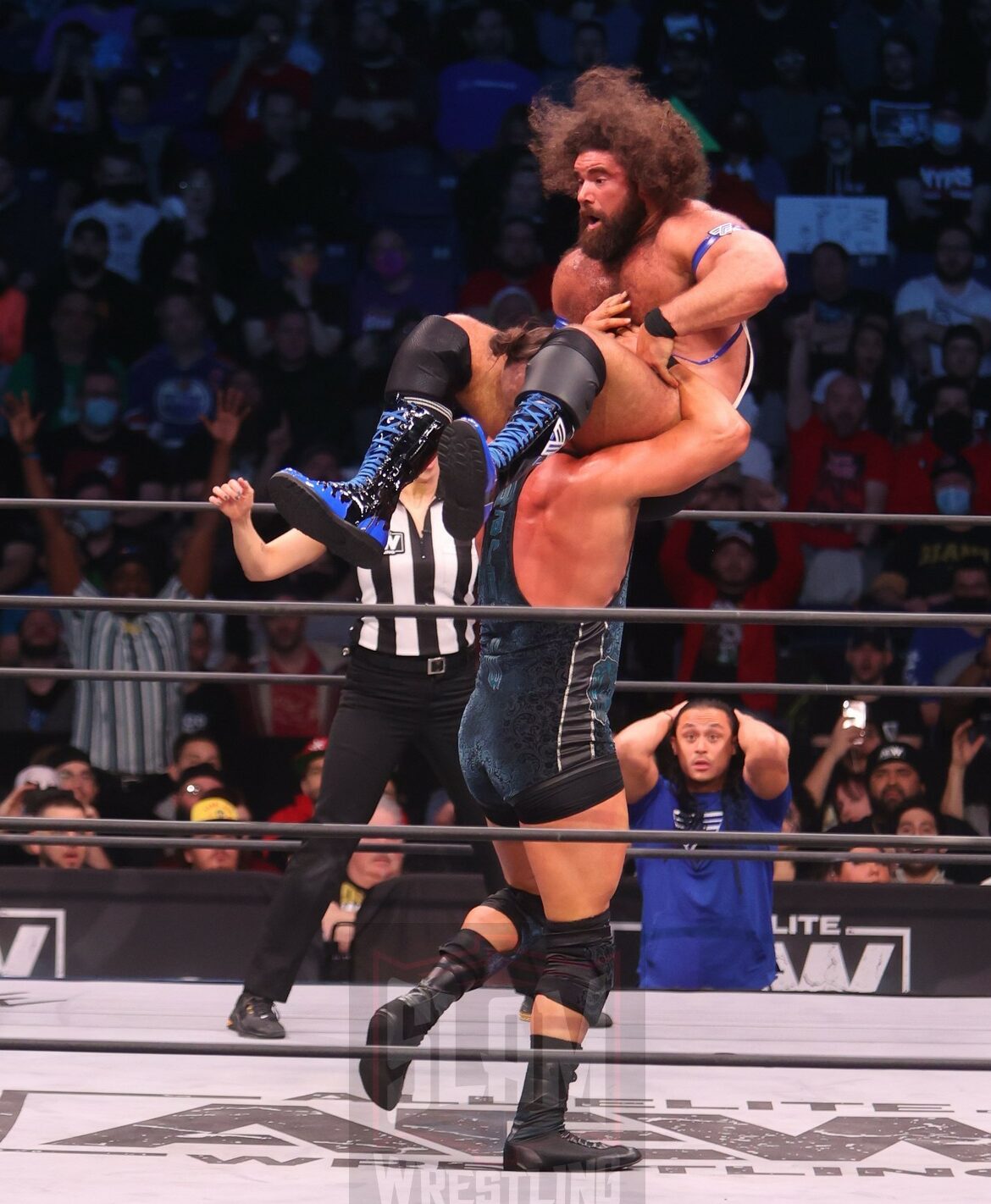 Your Winner via Pinfall:  Wardlow

After the match, Solow goes up to and launches for a crossbody, and Wardlow catches him.  Before an encore symphony breaks out, Spears hits Solow with a chair while Wardlow is still holding him, and he asks what the hell that was about. Spears quickly gets on a mic, and says to the big guy to calm down.  Spears also says, while deescalating the tension, that the powerbombs are not working, and it’s time to go back to the basics. So…no more powerbombs, and he and MJF are so proud of Wardlow.  As Spears hugs him, Wardlow is just looking tired of this nonsense.

Hey kids, it’s time to go to class, and The Professor has another Five Minute lesson with an aspiring student.  So let’s take our seats for…

Two squash matches in one night?!  I had to check and see if my TV was on YouTube for AEW DARK Elevation, but nope.  It was on TNT, and my DVR didn’t erase it (unlike last week).  Therefore, I think, instead of a squash recipe, let’s do a Haiku in Review. 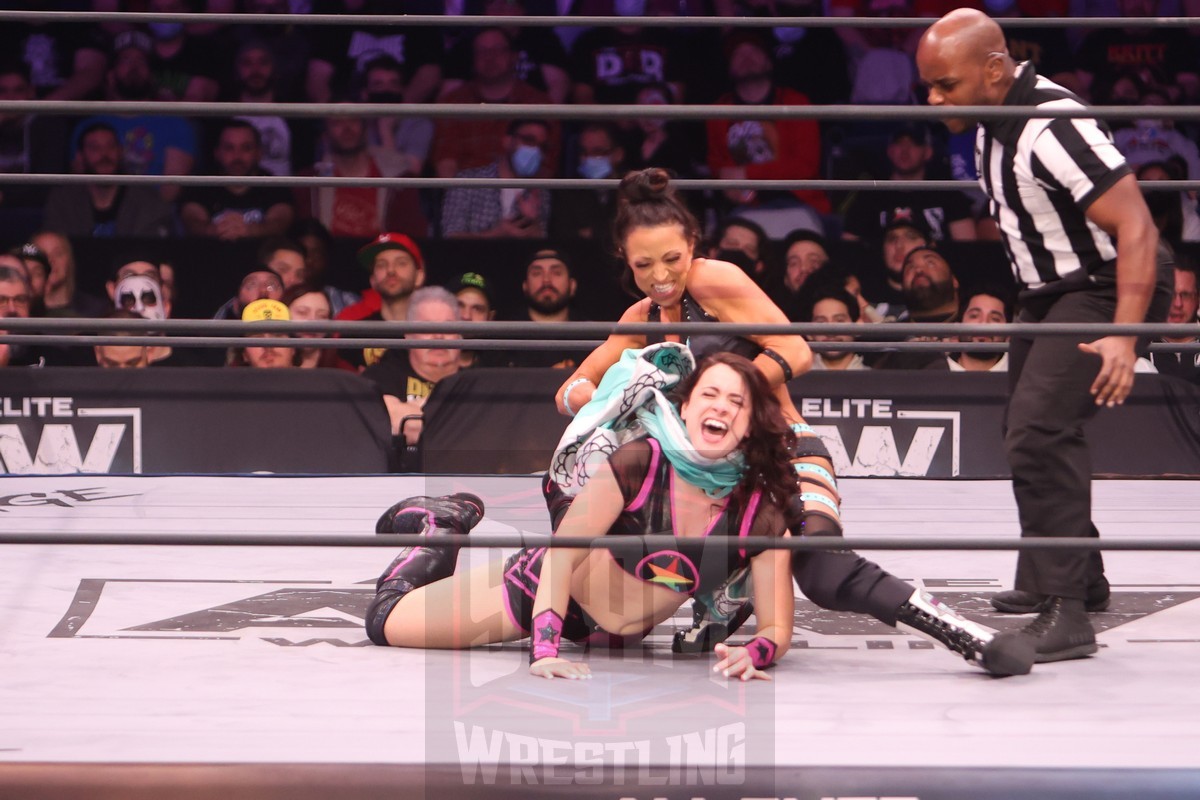 Serena Deeb wraps up Kayla Sparks in her robe at AEW Rampage, at the Webster Bank Arena, in Bridgeport, CT, taped on Wednesday, February 23, 2022, and airing on Friday, February 25, 2022. Photo by George Tahinos, https://georgetahinos.smugmug.com

Your Winner via Submission:  Serena Deeb

Tony Schiavone is in the ring with Britt Baker and Thunder Rosa for a contract signing for the AEW Women’s Championship match to take place at AEW Revolution. Rosa gets on the mic, and says she wants what the fans want; a champ that isn’t a cheating perra. Yes, folks; Thunder Rosa verbally b****-slapped the women’s champ in Spanish, if you will.

And now for the rebuttal, Baker says Rosa wishes she was in the position that she is in.  She calls out this Lights Out match, and says while Rosa won the battle, she has been on top and will remain so, because everyone talks about her.  Baker says that Rosa will never be the pillar, and calls out Rosa for wrestling on YouTube while she was in the limelight of AEW.  But it does matter because Rosa is nothing like the D.M.D. Baker signs, and then she and Rosa shook hands and went their separate ways.

No, I’m kidding.  You how these signings end up…Rosa goes full Chola on Baker, and it is a pull apart brawl, as Rebel and Jamie Hayter come to the champ’s aid.  Hayter attacks Rosa, and Mercedes Martinez gets in the ring, grabs her hair and slams her to the table.  I’m not big on contract signings, but this adds a little more sizzle to the championship match at the next PPV.

Now we go backstage, as Mark Henry is The Acclaimed members Max Castor and Anthony Bowens, as well as Orange Cassidy and Wheeler Yuta. Now, I’m a fan of Castor, and he speaks for Bowens on how Cassidy is gonna get mic dropped.  The best line is when Castor calls Cassidy a Macklemore wannabe (Ha!), but of course Cassidy stopped listening to those two a while back.

Well, like Henry says, it’s time for the Main Event for the final spot in the…

As Caster and Bowens get in the ring, Castor challenges Cassidy to…a rap battle.

Yes, you read that right.

Cassidy gets on the mic, and says, “A’right.  Look…” and then delivers his “stiff kicks” and sends Castor out of the ring, before ending with, “Word to your mother.”  I’m sorry (not sorry), but I’ll take that over Macklemore any day of the week.

Cassidy goes on the attack outside the ring, and Bowens gets him in the electric chair to drop him face first on the apron edge.  Match during Picture in Picture is all Bowens, with him adding pressure on neck region, wearing him down.  Caster helps his tag partner with further outside interference, and Bowens just stretches Cassidy’s arms on the ring post.  But never count out the King of Sloth Style, as Bowens whips him to the corner, and Cassidy comes back with a flip, flop with some Flair (woo!), and gets Bowens head and rams it from pillar to post.  Cassidy has Bowens rocked and launches himself up top for a crossbody. 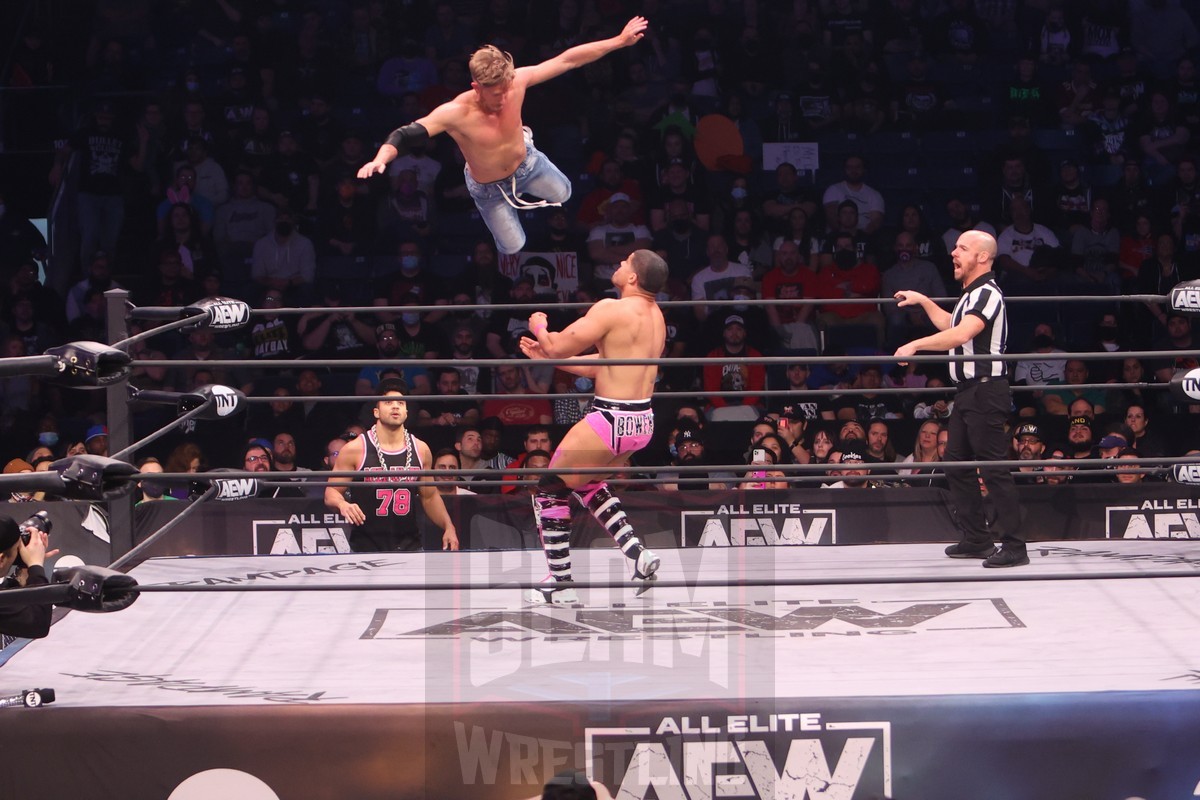 Orange Cassidy dives at Anthony Bowens at AEW Rampage, at the Webster Bank Arena, in Bridgeport, CT, taped on Wednesday, February 23, 2022, and airing on Friday, February 25, 2022. Photo by George Tahinos, https://georgetahinos.smugmug.comBowens goes for a suplex, but Cassidy twist midair to get a Stun Dog Millionaire, but Bowens recovers quickly and gets Cassidy in a spinning facebuster to a running knee strike for a two count.  Cassidy answers with a Michinoku Driver for a two count.  Bowens gets sent out, Cassidy follow in pursuit with a spring board twisting dive, followed by diving DDTs.  Caster tries to interfere, and drags Cassidy out of the ring.  He wraps his platinum chain around his fist, but a crewmember gets his head and….waitasec, it’s Danhausen.  This is a very nice, very evil surprise, as he throws a curse at Caster, and Cassidy nails the Orange Punch. Back in the ring, and Cassidy gives the Orange Punch to Bowens, and he pins him for one, two, and three!

Your Winner via Pinfall, and the Final Qualifier for the Face of the Revolution:  Orange Cassidy

Orange Cassidy is still…eh, whatever about the win, but enjoy this picture by our own George Tahinos. 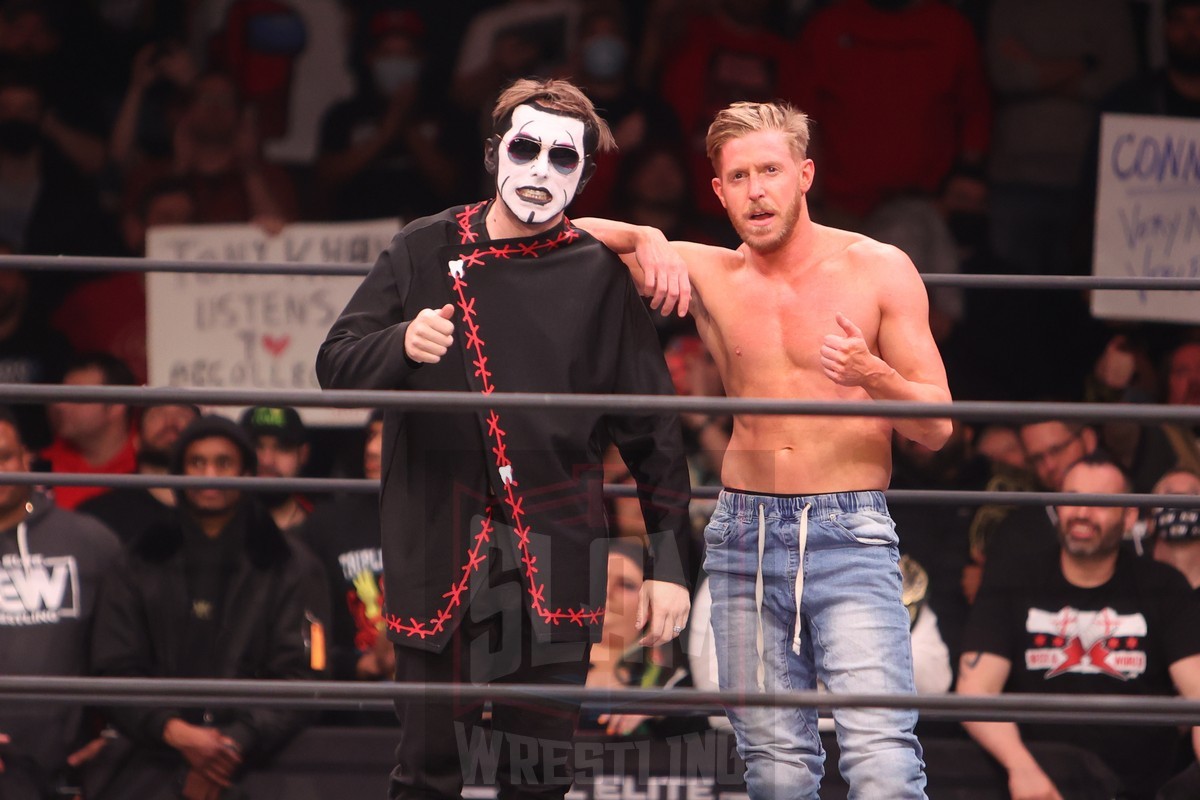 Danhausen and Orange Cassidy at AEW Rampage, at the Webster Bank Arena, in Bridgeport, CT, taped on Wednesday, February 23, 2022, and airing on Friday, February 25, 2022. Photo by George Tahinos, https://georgetahinos.smugmug.com

Really, only the title match by Guevara/Idolo and the qualifying match by Bowens/Cassidy really scratched my itch.  The contract signing was by the numbers, but Baker is proving night after night why she is the AEW Women’s champion.

I wasn’t crazy about the squash matches, but hey…if it furthers the storylines and angles, I’ll give it a Cassidy-style thumbs up.

Otherwise, see you in Seven