The SmackDown Rundown before WrestleMania 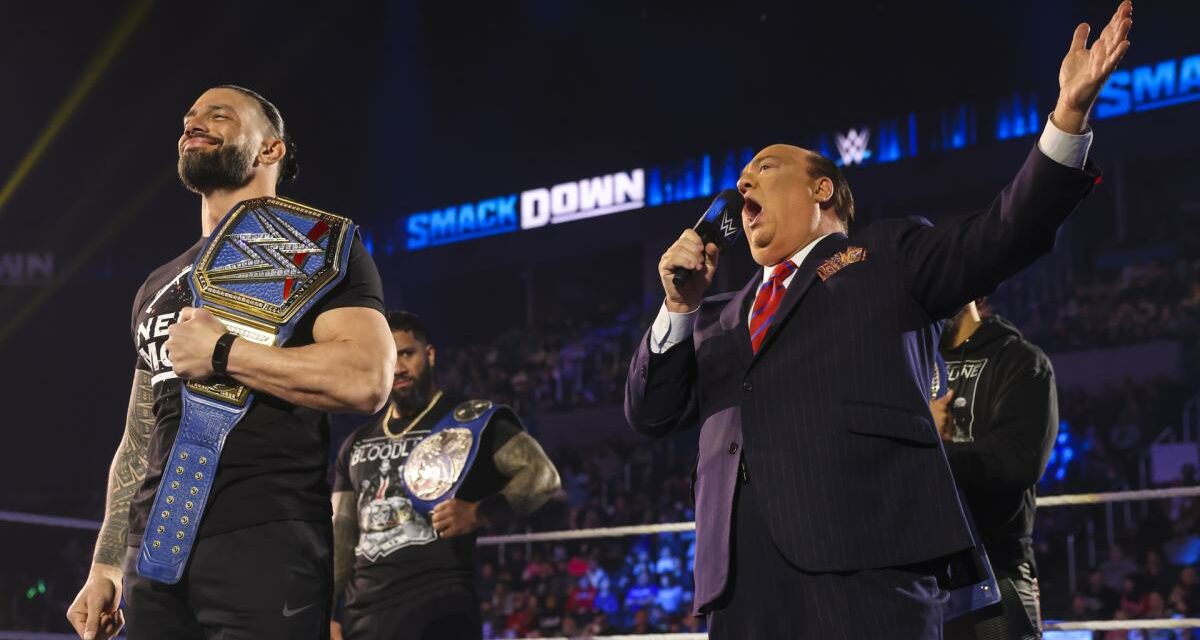 Only 36 days away from WrestleMania, tensions are high, rivalries are in place and back-talk was all the rage during tonight’s Friday Night SmackDown.

Ronda Rousey entered the ring to make an announcement to the fans. Back in 2019, she broke her hand multiple times then got pregnant with her daughter.

Even after that, she is still ambitious to come back. She spoke about her mom’s accomplishments. She wants to be the first women to tap out SmackDown’s Women Champion Charlotte Flair. Flair annihilated Ronda during the Elimination Chamber match. During Ronda’s chat, Flair interrupted her with one of the slowest walks imaginable.

Flair doesn’t feel any remorse for beating Ronda. Goes on to gloat about her championship. Suddenly, Sonya Deville surprised Ronda from behind like the little sneaky attacker she is. I think the announcers were confused as to what word they should use when Flair hit Ronda’s leg against the ring pole. Pain, I’d wager.

They teased about the upcoming Corey & Carmella reality show airing on Monday. That’s going to be a banger! Because of Deville’s actions she’s going against Ronda next week on SmackDown. Guess that sneak attack granted her a ticket to Hell. Anyway, what about the matches themselves tonight?

It started with admiration of New Day’s motorbike as they entered the audiences’ vision, Pat McAfee wanted that motorbike as a gift. Who wouldn’t want one? I want one!

Kofi starts the match against Alberto, the moves weren’t in his favor since he was being thrown around like a ragdoll till Big E got in the ring against Alberto. New Day did a sitting move to help Kofi gain momentum.

Angel distracted Kofi and allowed Alberto to kick him in the head sending him flying off the edge of the ring. Los Lotharios grabbed Kofi and threw him against the ring’s edge. While we’re getting potentially broken muscles, Angel removed his pants to reveal his undies. Ooh.

Angel got in the ring to beat Kofi up while he was pleading for Big E’s assistance. Angel got Kofi crawling on his knees. Los Lotharios maneuvered a move that looked like a slingshot onto Kofi. The crowd chanted for New Day. Big E came in strong against Alberto which caused Angel to create a distraction again.

The Suicide Dive move was done by Angel onto Kofi outside the ring. Kofi took advantage of Angel’s gaze towards their motorbike and smacked Angel onto the ground. New Day performed the “Midnight Owl” move that awarded them the win. I was at the edge of my seat.

Sheamus and Holland felt the need to tease New Day for their brilliant ride. The Usos bragged about beating the Viking Raiders during a backstage interview only for them to be attacked by the Raiders out of nowhere. It was enthralling to watch.

Xia Li (the protector) vs. Natalya

Chinese wrestler Xia Li’s debut match is against Natalya, who has 132 wins under her currently non-existent belt. Nattie here felt the need to bring a world record book just to prove her point.

Xia is titled as one of the fastest swippers in the wrestling realm while Natalya is looking to break records.

So, Natalya does a suplex onto Xia. She was trying to tap Xia out in the middle of ring, but Li wasn’t about to let that happen and elbows Natalya. A kick to mid section from Xia while Natalya was near the turnbuckles. A great throw from Li over her shoulder.

Nattie sharpshoots onto Xia followed by a spin kick from Li to Natalya’s face granting her the win. She ends Natalya’s streak. “Xia, welcome to WrestleMania.” said the announcer

Must we talk about Sami Zayn’s clearly liquified brain next? Yes, apparently… Zayn has been an “unbearable winner” for seven days since winning the Intercontinental Championship against Shinsuke Nakumara. I’m still mad about that. Zayn is looking for a celebration for his win. The ring was decorated for this. Really?

He sung the “Oh, Happy Day” song before saying “Finally! Justice has been served.” For some over-exaggerated reason, Zayn still believes there was a conspiracy against him. Out of breath. Still an ass. Demanding respect. From who? I don’t know. No surprise there except for what happens after. He went on to say that he is happy to defend his current title with anyone who dares challenge him. So, Johnny Knoxville steps up into the ring to accept the obstacle set by Zayn. Didn’t think that through because he immediately gets mad that a contender showed up. Shocker.

“Don’t you have enough balls?” says Knoxville. A cheap shot from Zayn saying that Johnny doesn’t deserve to be in the same ring. Then Zayn does a face kick to knock Knoxville out along with his wallet. The official match; however, for the Intercontinental Championship is Sami Zayn vs. Ricochet next week.

Sasha ‘The Boss’ Banks vs. Shotzi

Naomi joined the announcement table during this match. Amusingly, I wondered if they were even paying attention to the brawling itself. The camera kept filming away from the ring action, which I found funny and felt like sharing. Plus, it was one of the shortest matches I’ve ever seen. Girl! what? It felt like five minutes. Let’s dive into what was good.

Sasha Banks jumps right off the top ropes and onto Shotzi’s face. Banks annihilated Shotzi to the bones from the very start, Shotzi could barely catch up. Miss Boss did manage to place Shotzi into submission and receive the win no matter how uneventful this fight felt. So, Naomi enlightens the dry performance by announcing that she and Sasha are going to be the next Tag Team champions for what I assume is WrestleMania.

Before the match, Happy Corbin kept making jokes about how tough and weird Madcap Moss’s neck is because of the suplex move McIntyre put him through at the Elimination Chamber match. McIntyre is seen as a “Greek god”, I see a Celtic warrior instead.

Happy was making sure he asked if Drew didn’t want to embarrass himself in front of the audience. The crowd wasn’t for Corbin, nor Moss. Why name yourself ‘Happy’ if no one seems to smile in your presence? It defeats the logic, no?

There was a cheap shot against McIntyre after Moss and Corbin chatted it up in the ring as Corbin removed himself from the match placing Madcap Moss instead. There was a hard face hit from McIntyre to Moss’s jaw that you can hear it from miles away. IT WAS HILARIOUS.

Later, Moss escapes McIntyre’s maneuverer that caused the aches in his neck. Madcap has got Drew in a choke hold till McIntyre pushes him into the turnbuckles then he gets kicked by Moss. Corbin kept on cheering for Madcap. Useless, really.

A neck breaker from McIntyre. 3 2 1 Corbin interrupts. Madcap sticks his thumb to Drew’s eye. What is also funny was when Moss went back and forth between the ropes, wasting time mind you, before getting kicked by McIntyre so swiftly as if it was nothing.

Someone wanted Cesaro tonight, I saw the poster. Roman Reigns still wants to be acknowledged by Goldberg. But what was even bigger is that Reigns tested positive for the illness. Yikes!

Brock Lesnar has been cheated out of his Universal Championship but was able to retrieve his title at the Elimination Chamber match from last week.

As usual, Paul Heyman revealed his true colors, being the same weasel, snake and rat that he is.

Oh, by the way, Heyman snaps his fingers in our faces. Rude. Lesnar came in wearing a cowboy hat, I thought you should know I’m still reeling from this new appearance. Along with this classic line, “Mr. Acknowledgement and Mr. Dick.”  says Lesnar towards Reigns and Heyman.  “I am WrestleMania!” says Reigns in return. As an end result, Lesnar brawls Reigns’ security. I enjoyed greatly!

TOP PHOTO: Roman Reigns, the WWE Universal Champion, Paul Heyman & the Usos in the back