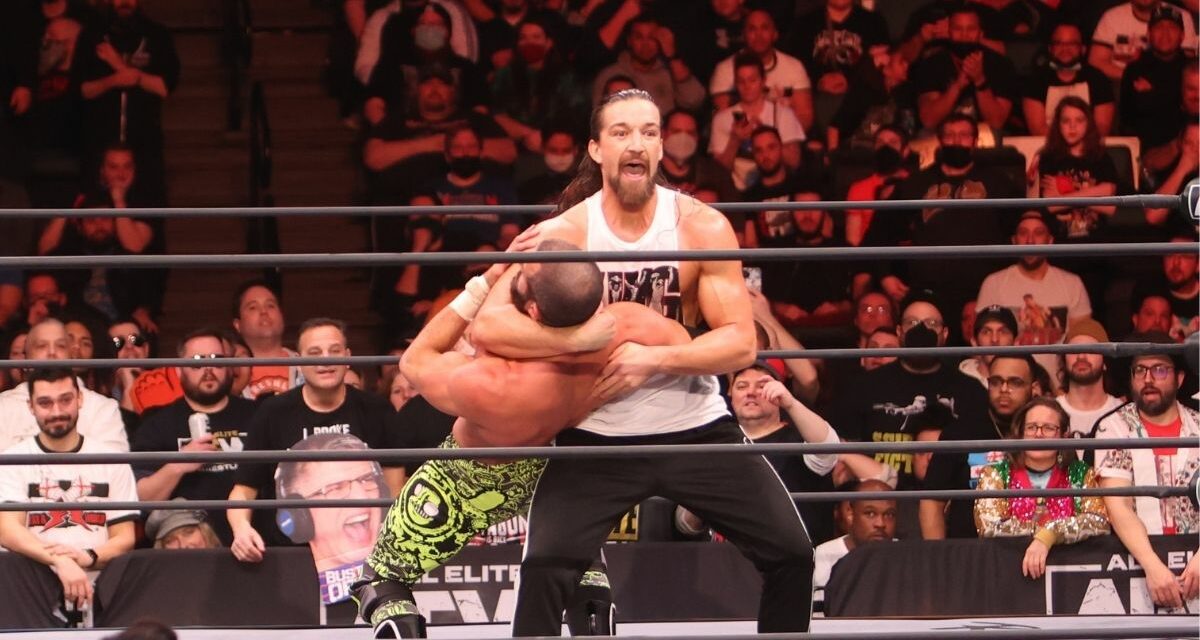 It’s Friday Night and you know what that means? No, not to watch Peacemaker (whattajoke), or to see if Keith Lee is truly a limitless bearcat. It’s time for AEW Rampage, and it’s a stacked card with tag matches, title shots, and a chance to breathe with the Switchblade.

We are coming to you from the Jim Whelan Boardwalk Hall in Atlantic City, NJ. Excalibur, Taz, Ricky Starks and Chris Jericho have the call, and there’s no time to waste, as we head straight to the First Match of the night…

If any of you remember the joys of the junior heavyweight tag matches in New Japan Pro Wrestling, and thought this match wouldn’t happen again…well, your wish has been granted. Roppongi Vice manages to outwrestle Nick and Mark Jackson, and the Bucks walk away from the nonsense.  Beretta and Romero give chase and a couple Superkicks leave them laying.  The bucks dash back to the ring, so the ref gives Roppongi Vice the ten count.  Romero unsteadily but surely makes in time to break the count, and from there it’s a full-court Bucks offense, with Mark and Nick doing a monkey flip to the top rope, and Nick hits a Moonsault to Roppongi Vice to the outside of the ring.  But there’s something, or someone under the ring and…yes, it’s Danhausen! He curses the Bucks, and Roppongi Vice use the time to hit stereo tope suicidas.  Romero goes for a running Sliced Bread #2 on Mark to pin for a two count. 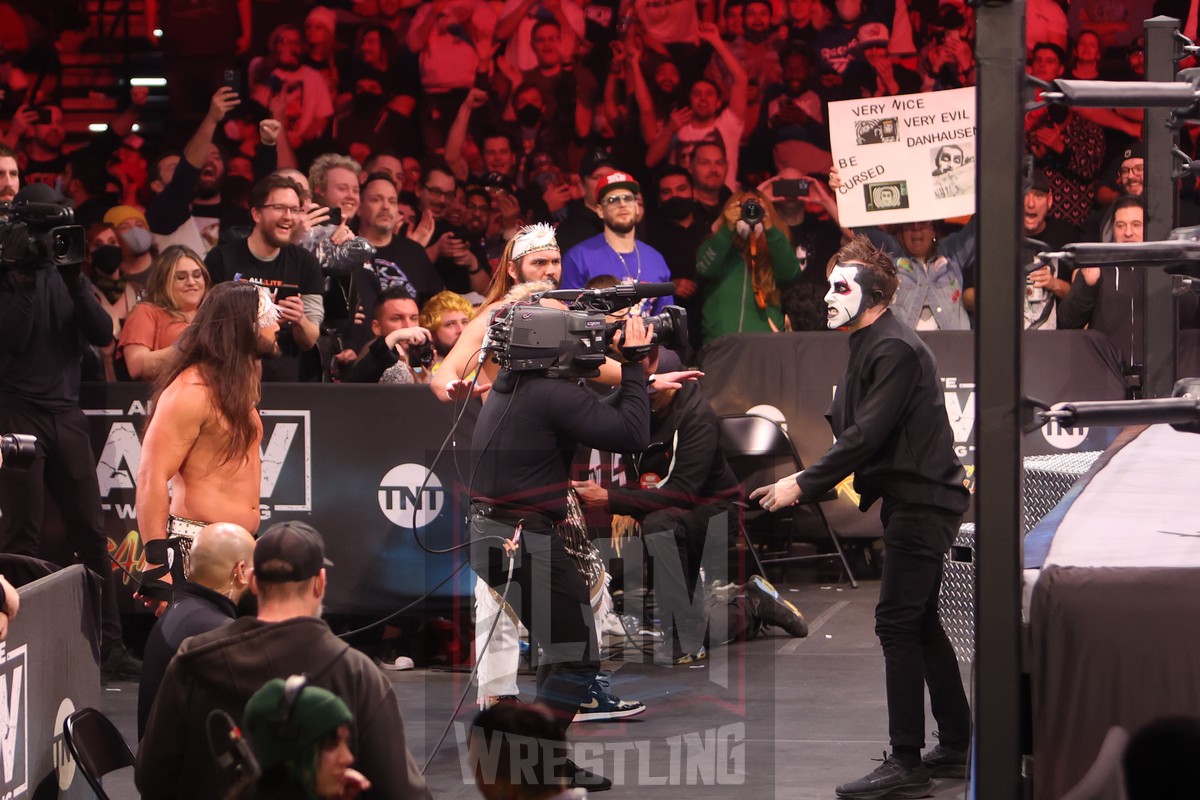 During Picture in Picture, Mark is on the attack as Young Buck shenanigans tips the scales in their favor, as Nick and Mark hit stereo powerbombs to apron edge on Roppongi Vice.  Back in, the Bucks mock Beretta and hug in ring, Best Friends-style, and Excalibur exclaims, “You don’t have to give people what they want.”

Roppongi Vice manage to get back on offense, and Romero and Beretta double team with a guillotine leg drop/knee strike move to cover, but gets a two count.  They go on to deliver stereo German Suplexes to the Young Bucks.  The Bucks have a few tricks up their sleeve, going for the Meltzer Driver, but Romero reverses to a pin attempt for a two count.  Beretta hits Nick with the Strong zero finisher, but the pin attempt gets broken up by Mark and Romero crashing into him.  The fans are on their feet, chanting “This is Awesome”, and Roppongi Vice try to put away the Bucks with a double team move, but they reverse and nail the Meltzer Driver on Romero to cover for one, two…Romero kicks out.  The bucks have had enough, as the send Beretta out, and then get Romero in the BTE trigger, and that’s all she wrote.

Cassidy checks on Romero, and Cutler comes in and sprays the cold freeze but…silly mark, Cassidy has his shades on. Cassidy goes for his “stiff kicks” to an Orange Punch, but The Bucks come back and give Cassidy a Superkick party. Beretta chases off Mark and Nick, and Jay White comes into the ring and gets Beretta with the Blade Runner finisher, ensuring Roppongi Vice breathes with the Switchblade.

We head back to commentary, and Starks issues a challenge to Dante Martin.  He offers the opportunity to face his Team Taz teammate “Powerhouse” Hobbs in a Face of the Revolution qualifying match next week on AEW Dynamite.

Backstage, Tony Schiavone is with Bryan Danielson, asking his thoughts on CM Punk teaming with Jon Moxley. Danielson is not bothered, because he’s wants to build relationships in AEW to last a lifetime, as opposed to last week being just a one-and-done situation. Soon, Matt Sydal interrupts, and calls out Danielson trying to stick his nose in mentoring Lee Moriarty.  Danielson point blank says Moriarty needs a better teacher, and that’s enough for Moriarty to step in and challenge Danielson for a match. Danielson appreciates the gumption in the youngster and accepts the challenge next Wednesday on AEW Dynamite.  Yes, folks, this is the Year of Taiga-Style.

And now it’s time for…

This is Renegade’s Rampage debut, and she’s actually putting forward a good back and forth match, and she starts to get the best of Dr. Baker.  During Picture in Picture, the tables have turned on the upstart Renegade, and Rebel interferes from outside the ring and adds more pain to Renegade.  Baker hammers Renegade’s head with elbows, and just toys with her.  That starts to lead to… 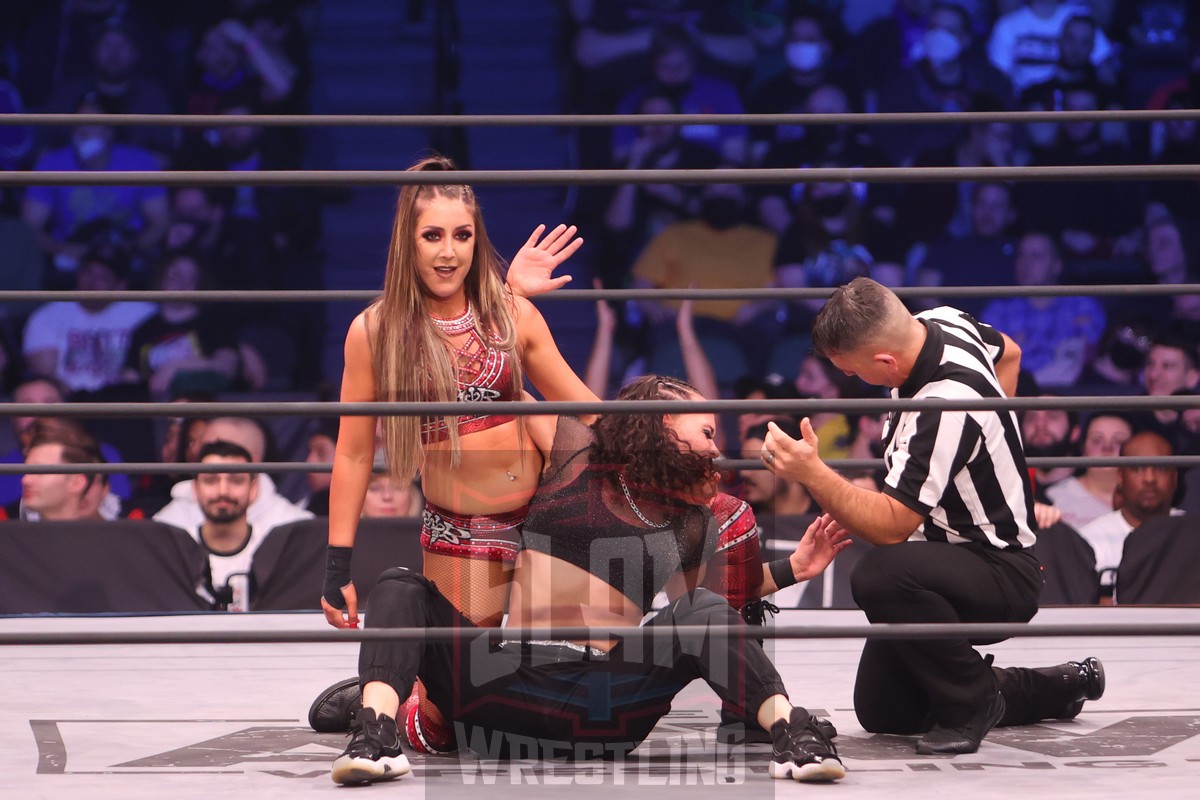 We come back from the break, and Renegade starts to fire up and gets a nice Renegade splash to cover for a two count.  She attempts a suplex, and Baker blocks to a gator roll and transitions to a basement superkick.  Baker follows up with a fisherman’s neckbreaker to a stomp that puts Seth Rollins to shame (don’t @ me!), and it’s enough to get the pin, and the win.

After the match, Rebel gives the good doctor her bedazzled glove, and Baker gets Renegade in the Lockjaw to add insult to injury, and Thunder Rosa comes out to clean her clock.  She mounts Baker and punches away, but Jamie Hayter comes out and works over Rosa. Now, Mercedes Martinez comes in and things gets heated between her and Hayter, but Baker gets in the middle to keep the peace. 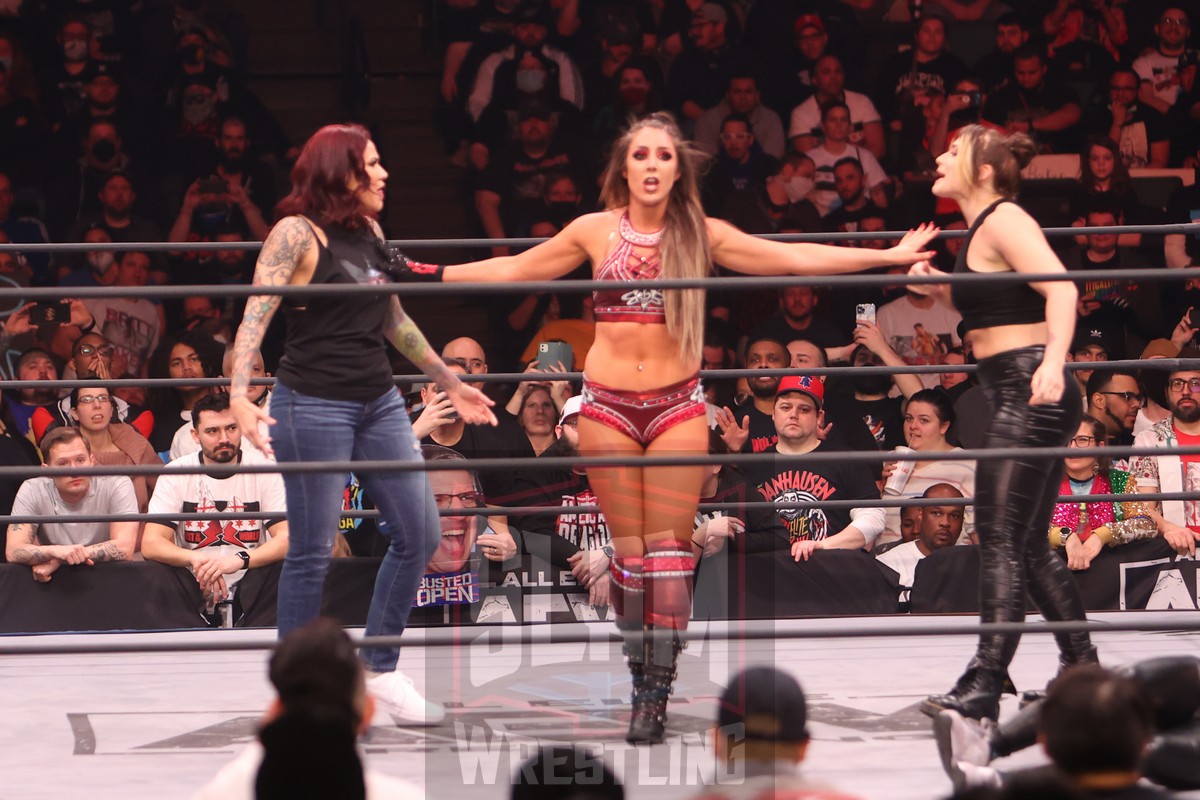 Mercedes Martinez and Jamie Hayter want to go at it as Dr. Britt Baker keeps the peace at AEW Rampage, at Boardwalk Hall in Atlantic City, NJ, taped on February 9, 2022. Photo by George Tahinos, https://georgetahinos.smugmug.com

I must say, I am digging the trouble brewing in the doctor’s circle, and can’t wait for the implosion to come between Martinez/Hayter.

We get dueling promos of the simmering feud between “Legit” Leyla Hirsch and Kris Statlander.  In summary, Hirsch doesn’t like Statlander being looked down as unprofessional, and Statlander thinks she needs to learn respect.

Got it?  Good. Because now we get… 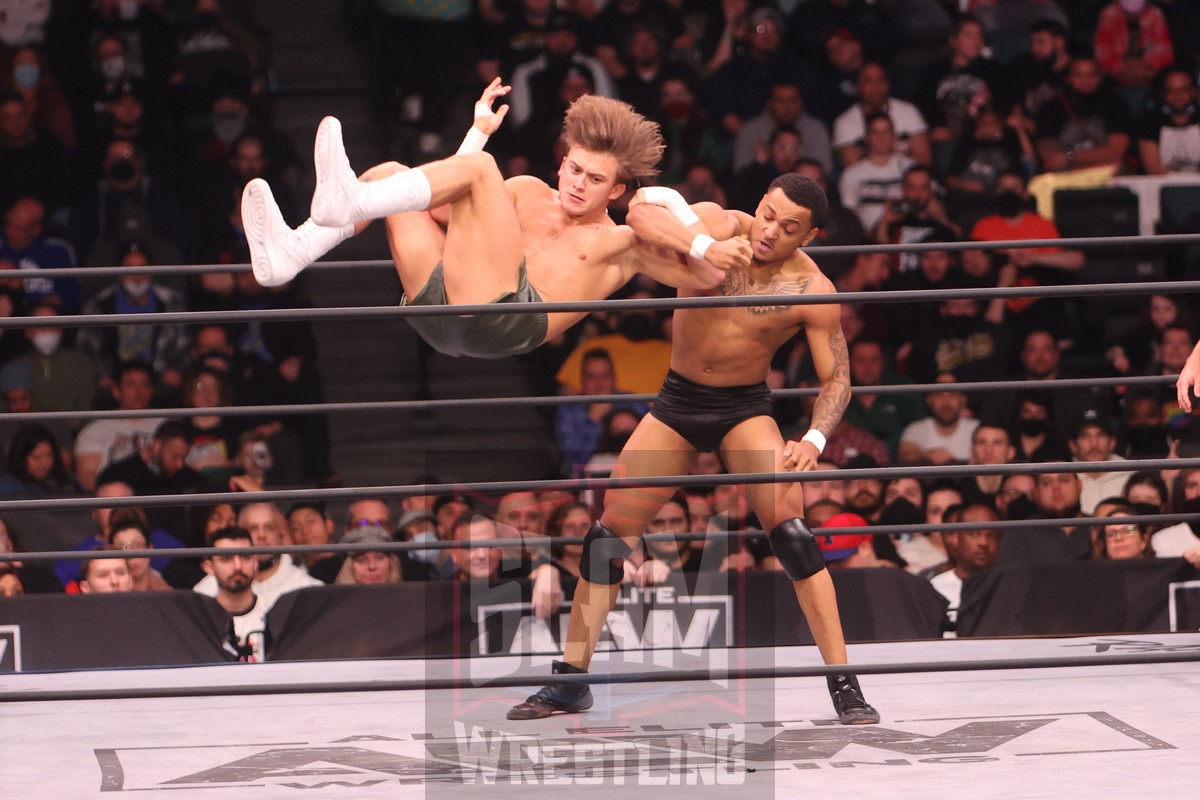 (Author’s Rant:  Yeah, I get they’re making Hook as an unstoppable wrestling machine, much like papa Taz; but right now…color me uninterested.  Don’t get me wrong, I think he’s got some moves that puts him in the realm of legit “shooters” of a bygone era, but until he gets a truly worthy opponent test his mettle, I simply do not recap squash matches.  So, in honor of this matchup, enjoy this Whipped Squash recipe).

As for the match, the end has Hook deliver a modified T-bone suplex, followed with crossface punches to the Red Rum submission.

Your Winner via Submission:  Hook

Jericho says, “Hookamania is running wild!”, and who am I to disagree with Le Champion?

Now, we get Mark Henry with the tag teams Jurassic Express and The Gunn Club. Henry states that Gunn Club is undefeated, and Billy speaks for his boys, saying Luchasaurus and Jungle Boy aren’t worthy of the tag belts, and tonight they plan to beat them. Christian Cage pipes up, and notes the elder Gunn’s “Say When” T-shirt, quipping that Billy should have said when 20 years ago (*burn*). He and Jungle Boy remark that tonight, they retain the belt and beat the “Ass Boys” in the ring.

Strong words (and funny one, too). With that, Mark Henry declares, “It’s time for the Main Event!” It’s an important one, since it’s for the…

As the bell rings, Jungle Boy and Austin start, and Jungle Boy outwrestles the Gunn Club and hands them their ass (so to speak).  As the Gunn Club go outside the ring to plan a little strategy, Luchasaurus stalks his prey and slam them to the ring apron edge.  Back in the ring, Luchasaurus shows his Dino power, and double clotheslines the brothers. 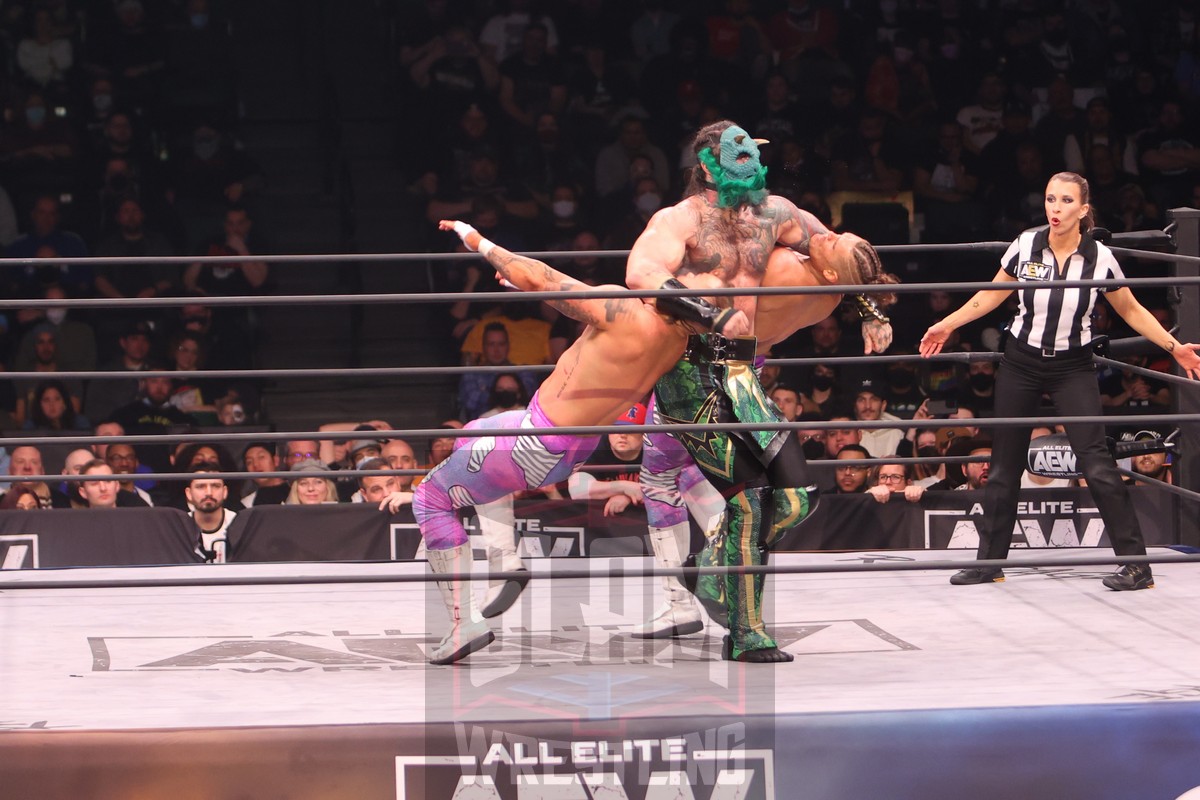 He tags in Jungle Boy and they do a double team somersault senton to Austin to cover for a two count.   As Jungle Boy gets fired up, Austin tags in Colten, and he delivers a huge lariat that nearly decapitates the Boy.  During Picture in Picture, Colten and Austin double team and pick apart Jungle Boy, making him your Jurassic in Peril.

He tags in Jungle Boy and they do a double team somersault senton to Austin to cover for a two count.   As Jungle Boy gets fired up, Austin tags in Colten, and he delivers a huge lariat that nearly decapitates the Boy.  During Picture in Picture, Colten and Austin double team and pick apart Jungle Boy, making him your Jurassic in Peril.

Austin has Jungle Boy in a headlock, but he fights his way out, and tries to get the hot tag, but Austin knocks Luchasaurus off the ring before that can happen.  Back in the ring, Jungle Boy is in trouble, but he manages to fight out get the tag to Luchasaurus, he is your Dino en Fuego, as he gets the Gunn Club in a goozle.  They manage to escape to the outside, but Jungle Boy comes back with a somersault senton to both Gunn Club members.  He sends Austin and Colten back in the ring, where Luchasaurus delivers a choke slam and Moonsault press to Colten for a two count.  The match starts to devolve, and it’s all referee Aubrey Edwards can do to keep control of the match.

Outside the ring, Luchasaurus and Austin Gunn brawl, and Jungle Boy goes for a tope suicida, but Austin scouts it and manages to evade, but Luchasaurus gets the worse of the move from his partner.  Austin follows with a QuickDraw, and gets Jungle Boy in the ring and uses the ropes as leverage to pin, but Captain Charisma gets on the ring and kicks off his feet.  Now papa Billy and Christian Cage start to fight on the outside and this match is officially off the rails.   Jungle Boy is left in the ring, as Colten grabs one of the tag belt and beans Jungle boy.  He gets the pin attempt for one, two…Jungle Boy kicks out.  Colten attempts use his dad’s Fameasser finisher, but Jungle Boy reverses to get the Killswitch and he pins for one, two, and three

Your Winner via Pinfall:  Jurassic Express

The tag champ celebrate as the Gunn Club head off licking their wounds as the show fades to black.

Anything with The Young Bucks is always going to be gold, and the first match was indicative of that fact.  That Jay White came to add the exclamation point was just a cherry on top.  The tag title match was a good one as well, and Jungle Boy and Luchasaurus really stand out as the tag champs.