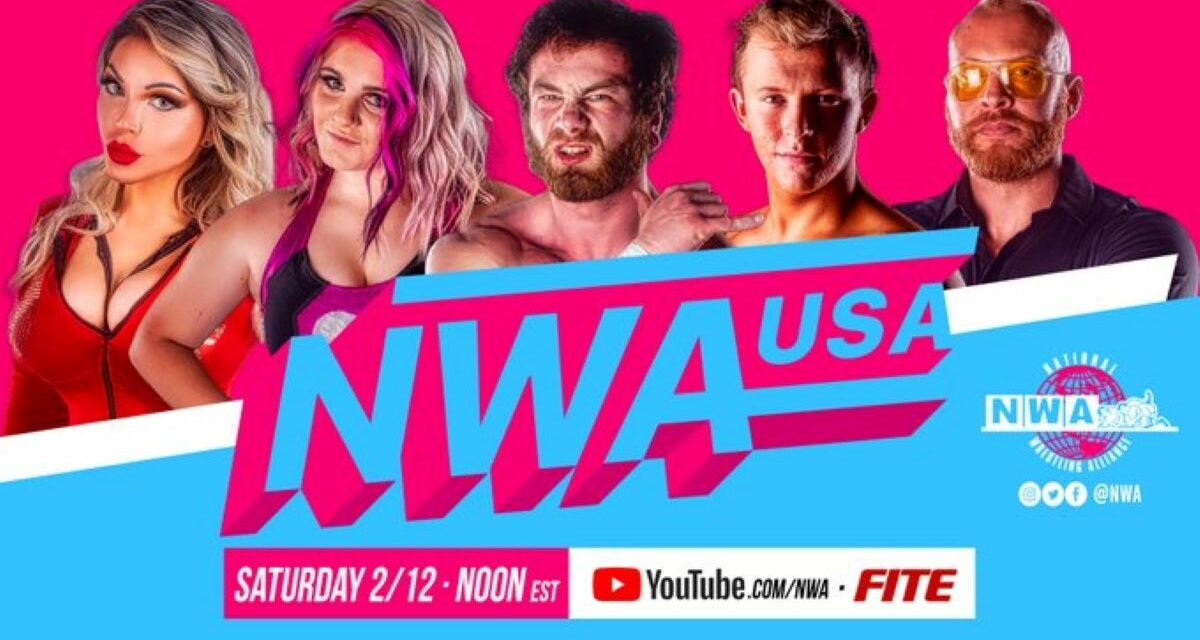 Welcome to another NWA USA, and looks like I’m pulling double duty this week.  But this is a good show with two of the best third-generation wrestlers in Colby Corino and Kerry Morton to see who advances in the NWA Junior Heavyweight tournament.  Also, the feud between Kenzie Paige and Natalia Markova reaches a new level, as this is the rubber match to determine a winner.

We go to a cold open, as May Valentine is with Austin Aries, asking his thoughts on the strong words by Homicide last week. Aries starts by congratulating Valentine for having a job again this week, and says he is the most decorated wrestler of all time.  “Homicide, you’re tough but not refined!” says Aries.  “You’re a fighter…I’m a professional wrestler!”, and he states that will be the difference when he becomes the NWA Junior Heavyweight champion.

And we head to the ring at GPB Studios in Atlanta, GA.  Your commentators Joe Galli, Austin Idol and Velvet Sky have the call. Idol says he’s the crowd’s favorite, and to quote Velvet Sky, I say, “C’mon!”

But let’s get to the First Match, and it is for the… 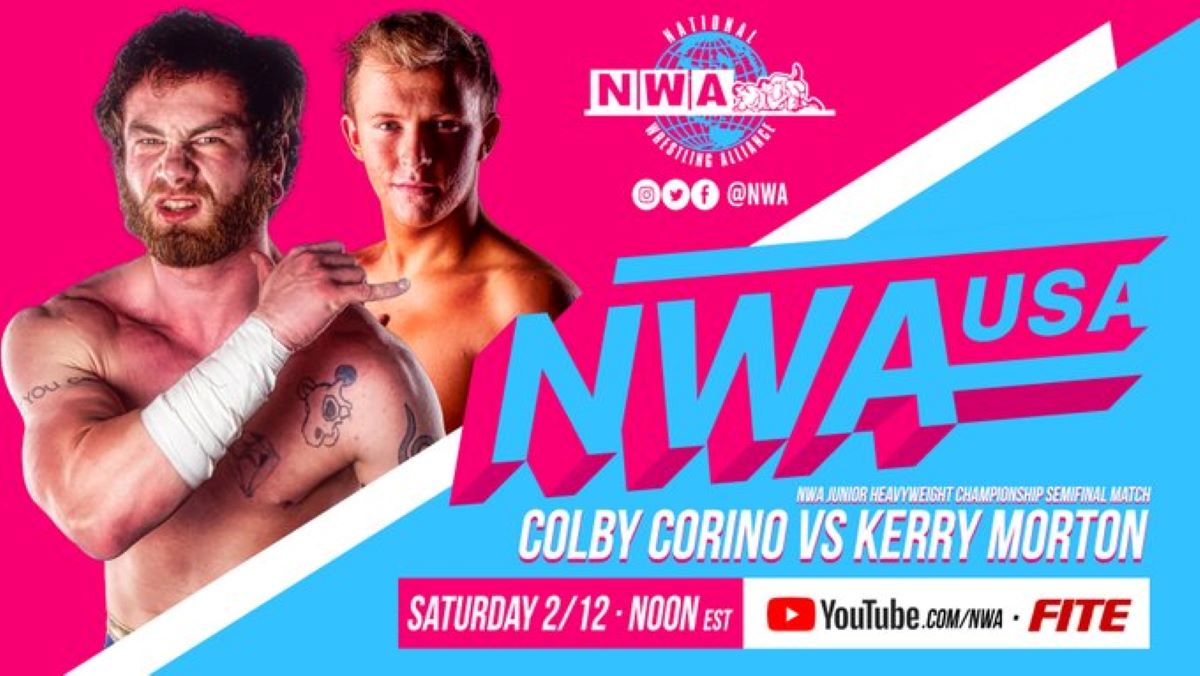 Corino with a handshake, but tries to sucker punch Morton.  Of course, Morton knows how to counter the Douchenozzlery of Corino.  This is a great back and forth match between two third generational wrestlers.  Corino is crafty, but Morton is able to keep up with The Bastion of Professional Wrestling.  Corino does have some fantastic offense (mixed with distractions, courtesy of “Wrecking Ball” Legurtsky), like a package piledriver setup to a backbreaker that earns him a two count.  Idol says that warms the cockles of his heart, and I’m with Sky on this one:  It just sounds *way* too creepy when it comes from him.

The match is all Corino, but Morton manages to come back, proving why he might live up to his “Future Legend” moniker.  Morton tries multiple pinning attempts, but can’t quite put away Corino.  Corino gets Morton in a vertical and finished with lungblower for a close two count.  Now he goes for a Samoan drop and goes for Colby Crush, but Morton rolls out, and Corino misses

Morton gets fired up and he gets a devastating knee strike for one, two…Corino kicks out.  It was that close.  Morton gets a discus clothesline, and covers for another two count. He tries a splash, and it’s another close two count for Morton.  Morton hits a steamroller, and now Jay Bradley jumps up to distract. As papa Ricky Morton goes to put a stop to this, the younger Morton gets sucker punched by Legurtsky, and Corino covers for a two.  Corino gets what I can describe as a flipping La Magistral, and that’s enough for the three count.

Corino advances to the final four, where he’ll face Austin Aries, and Darius Lockhart will go up against Homicide.  Oh, you best believe I am super-jazzed for the next matches to take place in the tourney.

We get a recap of NWA POWERRR, and you need to watch harder or read my recaps more.  I’d prefer if you read my stuff first (no pressure). 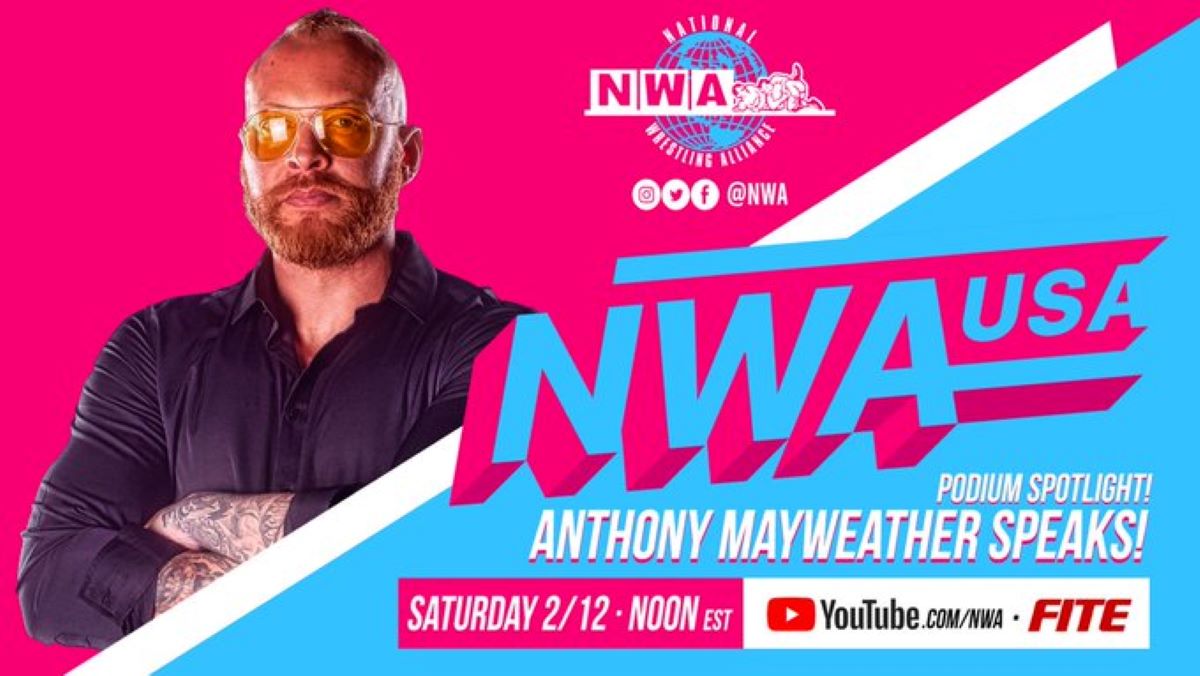 Kyle Davis is at the Sacred Desk, and he’s joined by Anthony Mayweather.  Davis asks where his focus has been, since his loss to Marshe Rockett, and Aldis giving him some tough lover. Mayweather acknowledges that he hasn’t been around, because he needed to absorb what was suggested, and Aldis was right; he needs to start closing on matches, he needs to start winning, and he is capable of beating Rockett in the past.  We that brings out BLK Jeez and Marshe Rockett. Jeez says that IdolMania Sport Entertainment, in conjunction with The Church’s Money Enterprise, is running things. Mayweather walks off in disgust, and Jeez tells Davis he’s secured a big match, and Jeez ain’t saying what it is…yet.

We go backstage again with May Valentine, and we get Strictly Business. She asks Kamille about news she’ll be at the main event tonight, and Kamille says Tim Storm told to be at ringside to preserve the image of the NWA, thus ensuring no double DQ. She doesn’t think much of Paige, having beat her twice, and Markova is a bit of “a ding dong.”  Valentine turns to Thom Latimer about Mayweather’s statement, and he feels that guy is “going nowhere fast.”  Finally, Valentine turns to Adonis to inquire if he’ll ever defend the NWA National title.  Adonis gives his best responsive non-response and says yeah…eventually.  Also, he might be defending it soon against some guy that he’s been hearing about, and Adonis states if it’s who he thinks it is, it’s a joke.

We get recaps of the NWA Junior Heavyweight tourney, and you should either go to YouTube to watch, subscribe to FITE, or read our recaps here.  Again, no pressure, but it’d be cooler if you read it here.

But we now go to your Main Event, and it’s the rematch between… 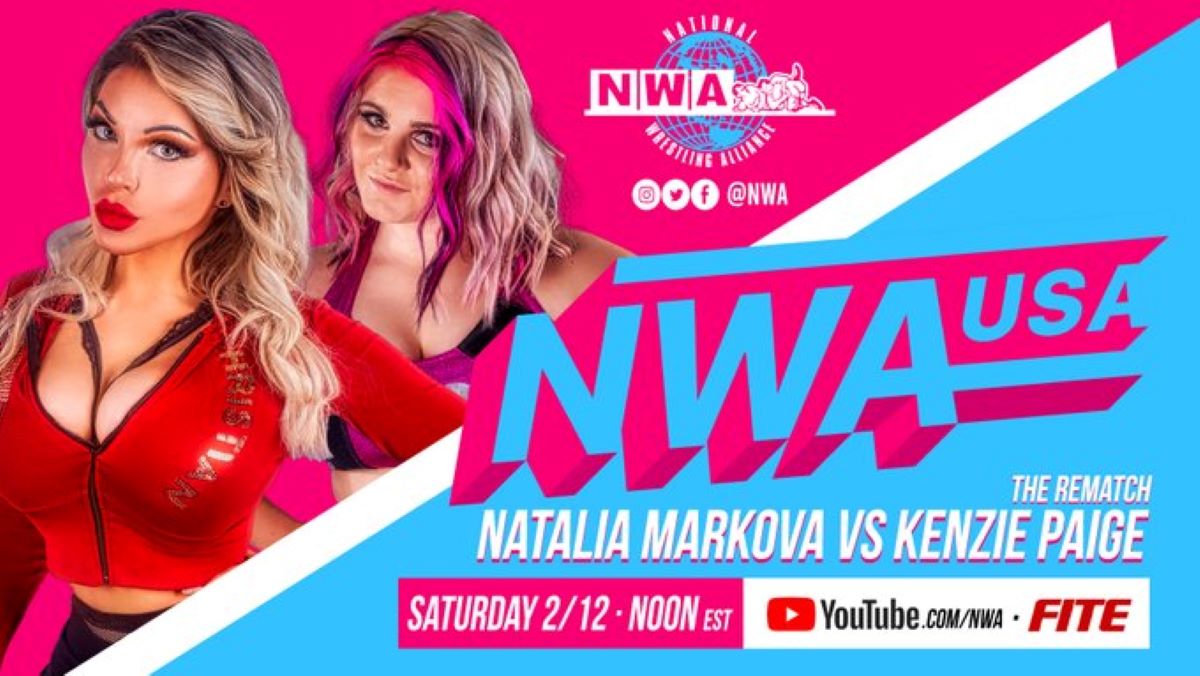 During Markova’s entrance, Galli quips that the Russian Crush thinks she is one of the Beautiful People, and Sky correctly says there’s only two people that qualify under that banner (read:  herself and Angelina Love), and Markova’s admission is flat-out denied. Now, Tim Storm comes out along with Kamille at ringside, and they be nearby to ensure the action in the ring stays clean and legal.

As the bell rings, both women start jaw jacking, and then they start throwing chops.  Paige goes for elbow strikes, and tries to roll up Markova for a one count.  Markova backs off, and the ref tries to get Paige to hold up to give the Russian Crush some breathing space.  Paige charges, but Markova rams her head to the middle turnbuckle.  From there, it’s all Markova as she uses her long legs to choke out Paige.  She tries the Beautiful Disaster spinning heel kick in the corner, but it misses the mark. Markova goes back on the attack, and this time lands a big boot and a cutter to Paige for a two count.

Paige fights back, but Markova gets a clothesline for another two count.  Markova gets a chinlock, and Paige’s escapes with a jawbreaker.  She fires up with two spinning heel kicks to cover Markova for a two count. Paige follows with a deep German suplex for another two count.  Markova answers back with an X-Factor that gets a two count, and then goes for a shining wizard, but Paige still kicks out.  The fans are really getting fired up, and chant for “Ken-zie.” Both women go up to the top turnbuckle, but Paige gets a European uppercut to knock Markova loopy, and then Paige nails a superplex to cover, but Markova kicks out.  Paige is starting to get frustrated, and attempts a full nelson submission, but The Russian Crush reverses to a double arm DDT, for a one, two…Paige kicks out.

Markova hits the ropes, but Kamille trips her up, and now the Russian is staring incredulously at the Brickhouse. Markova comes out and grabs a steel chair, but Tim Storm stops that from happening.  For whatever reason, Raven comes out, and it’s all sorts of chaos outside the ring.  Back in the ring, Paige gets an elbow and rolls up to cover, but still can’t get the pin, and she yells in frustration.  The end comes when Markova whips Paige into the corner, and now she delivers the Beautiful Disaster and gets the win in one, two, and three.

Your Winner via Pinfall:  Natalia Markova

Markova celebrates her big win as the show goes to credits.

Corino/Morton started the crowd hot, but it was Markova/Paige that closed out the show in a big way.  Regardless what people think of Markova’s mic skills, she is very athletic.  Also, Paige is a tremendous worker in her own right, and it wouldn’t surprise me if she gets another title shot down the road.

This show really highlights the best part of the NWA, and will help continue to grow it’s fanbase.

for now, I will see you in seven!