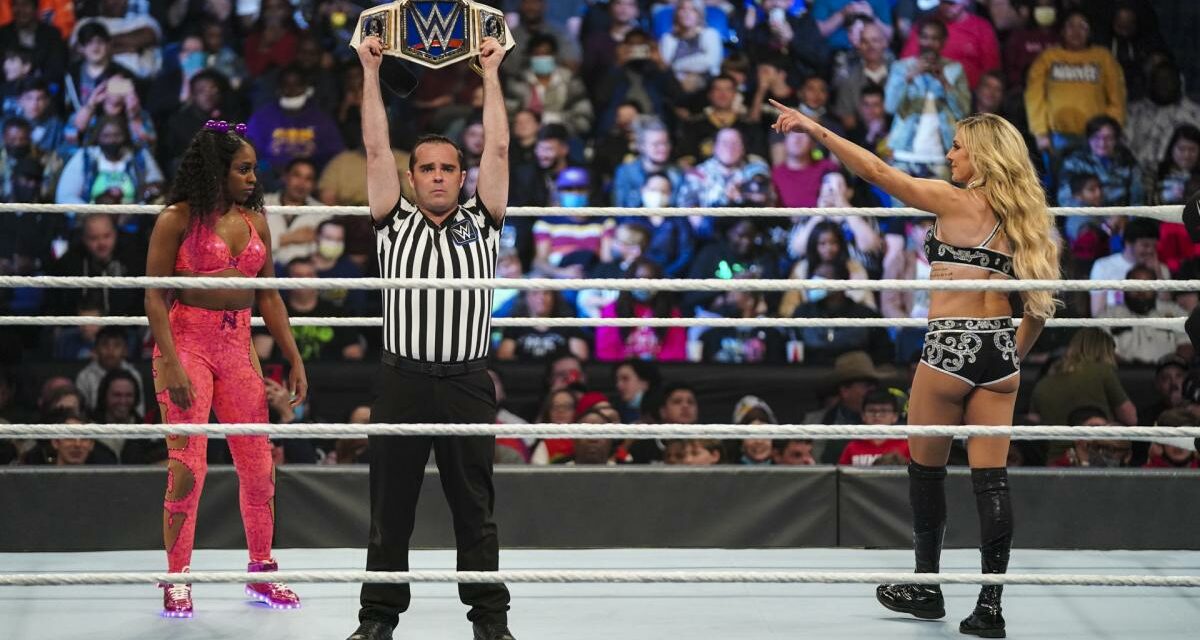 There are a couple of fine matches to take in on tonight’s SmackDown, and though neither moves the needle much as far as next week’s Elimination Chamber is concerned, you can see some WrestleMania plans start to take shape.

Sonya Deville takes center stage to start the show, with her arm in a sling and complaining about last week’s attack at the hands of Ronda Rousey. She says that people like Rousey, and Naomi for that matter, act like there aren’t any consequences for their actions, but that actions always have consequences. The New Orleans crowd, for some reason, boos this. So, boo consequences?

She says that she has appealed to upper management for a fine and suspension for Rousey, but Adam Pearce emerges to deliver a message from Vince McMahon that says the petition is declined. Plus, if Deville lays a hand on Naomi, especially in her title match with Charlotte Flair tonight, then her job will be in serious jeopardy.

Angel and Humberto check in with Kayla Braxton backstage before stepping through the curtain, and preach their confidence. On the way to the ring, we hear that tonight is the debut of the Los Lotharios Kiss Cam, which Corey Graves says is going to be “amazing”. Angel and Humberto stroll uninterestedly past the crowd until they reach their front row plant, and proceed to plant a kiss on each cheek of a young lady. Graves says “Wow!”

As Angel and Langston lock up, Graves has another mission to fulfill as he says that Langston, despite an impressive run as WWE Champion, just looks more comfortable tagging with Kingston. So, I guess we can stop waiting for that rematch clause to kick in?

Angel tries to hoist Langston up, but Big E shrugs him away and lays him out for Kingston to tag in and drop a senton for a two count. Humberto gets into the ring but is soon dragged to the apron by Kofi, who tags in Big E to drop a big splash on Carrillo before a commercial break. 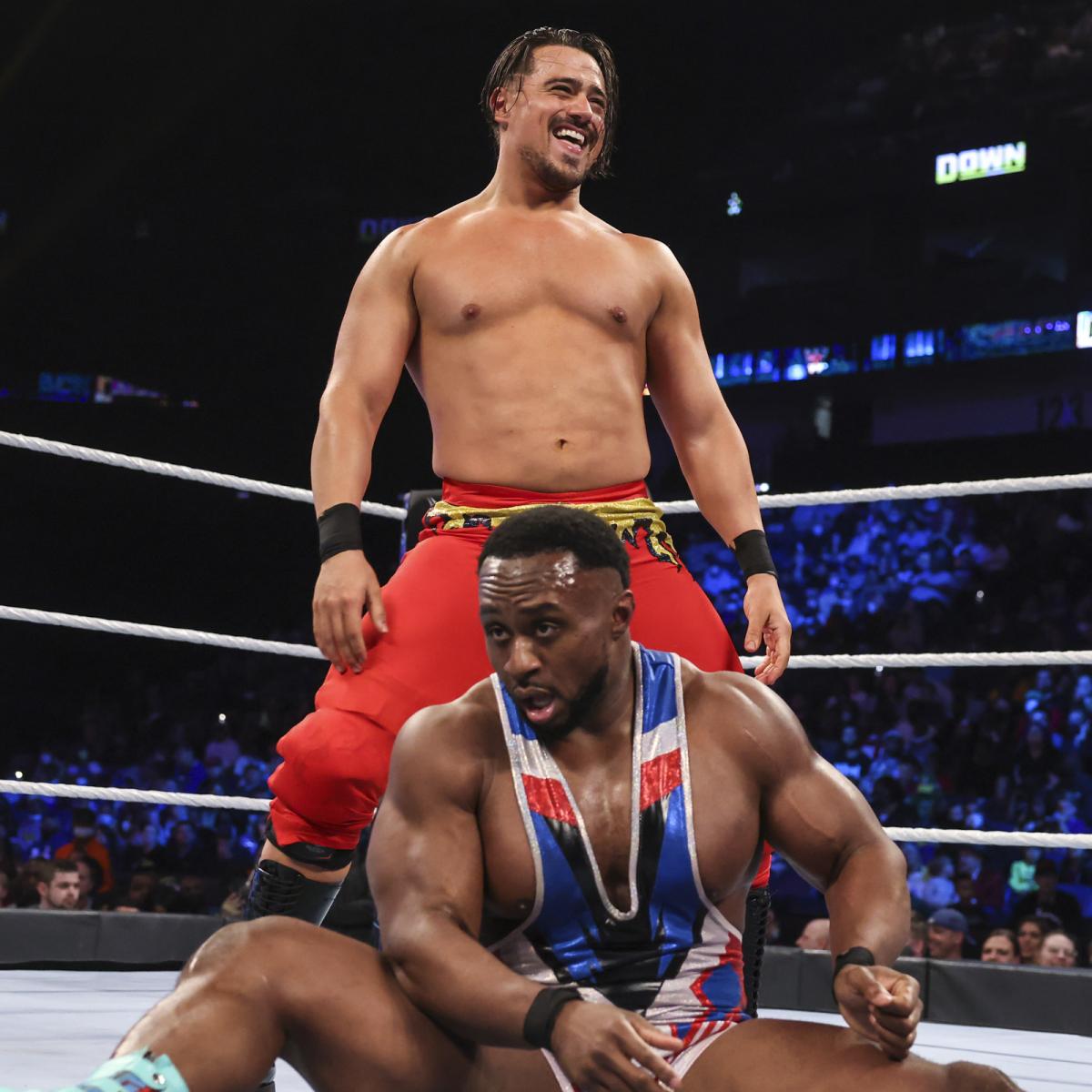 Langston is likely shell-shocked by both Garza’s offense and his rapid removal from the world title picture. Photo: WWE

Back from the ads, Angel is kicking Langston up and down before pausing to tear off his pants. I mean his own. A belly-to-belly by Langston turns the tables and both teams tag. Kingston enters with a leaping chop to the head, and not long afterwards New Day is thinking of their assisted Big Ending move but Angel interrupts from the floor. Instead, Langston holds Carrillo up for Kingston to jump off the top rope and deliver a mushroom stomp for another two-count.

The tide turns again and Humberto lands a moonsault on Kingston for his own two-count. Angel tags in and Kingston hits a Trouble in Paradise kick — but on Humberto. Angel, the legal man, stacks Kingston up for the win.

Angel and Humberto fall out of the ring to celebrate and, shockingly, there’s no sign of the young girl they kissed in the front row anymore.

Backstage, Megan Morant is hearing from The Viking Raiders on their upcoming match against The Usos at the Elimination Chamber. Jimmy and Jey attack them and steal their helmets. I guess now it’s on.

After a commercial break, Michael Cole has some interview time backstage with Roman Reigns and Paul Heyman. With every question asked, Reigns dismisses the query and talks about how great he is, smashing this and smashing that. He finishes by saying he’s “gonna Goldberg Goldberg”. I hope he makes that his new shirt.

Natalya knocks Aliyah down quickly for a near fall, but Aliyah responds with some gymnastics and taunting. A strong kick to the face and Michinoku Driver are Natalya’s comebacks, but after Aliyah tries a half-Boston Crab, Natalya locks in the Sharpshooter to which Aliyah submits. 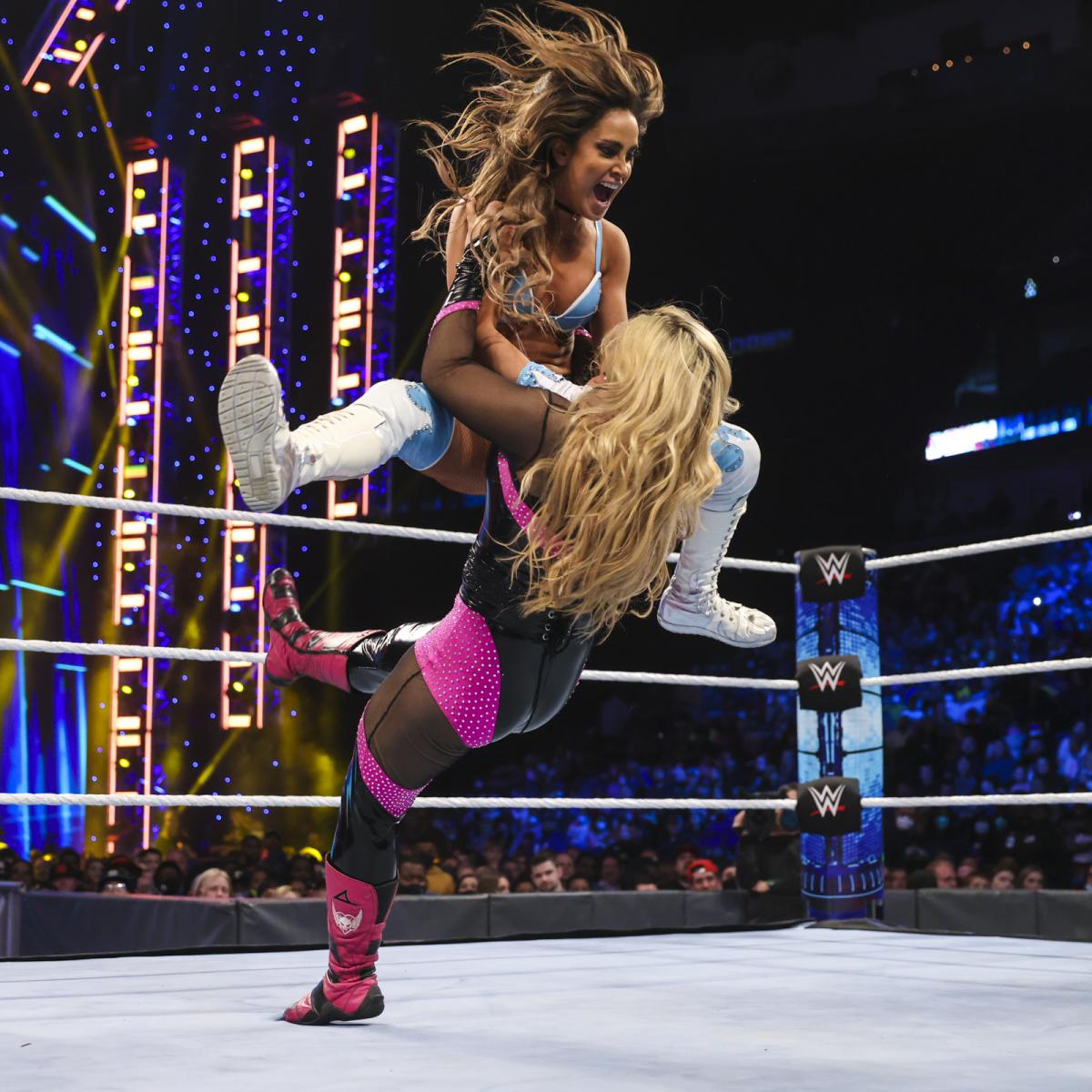 I’ll always take an opportunity to share a picture of Aliyah looking joyous in delivering a move. Photo: WWE

After the bell, Natalya continues a beating on Aliyah until Xia Li charges the ring and she and Natalya finally come to blows. A series of kicks sends Natalya reeling up the ramp.

We see a video tribute for Rocky Johnson, narrated by Dwayne, in celebration of Black History Month. Somehow it turns into as much a promo for The Rock.

Then it’s time for In-Zayn, but first we get a look at Johnny Knoxville visiting a WWE merch shop and wrecking some of the Sami Zayn stuff they have. “It’s not over,” says Knoxville.

Zayn welcomes his guest, Intercontinental Champion Shinsuke Nakamura (along with Rick Boogs), looking forward to the title match next week on SmackDown. Nakamura says that next week, the Jackass will be defeated — to which Boogs says: “Nice!”

Zayn turns his ire towards Boogs, who grabs a mic on the set to talk back but is …  electrocuted by the mic, complete with the same cartoon zapping sound effect that got Sami before the Royal Rumble.

Backstage, Madcap Moss is showing off his black eye from a Claymore last week, saying he can’t accompany Happy Corbin to his match against Cesaro.

We join the match in progress, with Corbin hoisting and throwing Cesaro into the corner buckles, and holding Cesaro down with a headlock until the Swissman powers out … and runs right into a Deep Six. Some uppercuts get Cesaro rolling again, but Corbin backdrops him out of position for a Neutralizer and finishes him with the End of Days.

Backstage in the doctor’s office, Moss is having checks done on his vision, but Drew McIntyre interrupts Moss’ attempts to get his match against Drew at Elimination Chamber cancelled. Drew announces that their match is now a Falls Count Anywhere match.

Elsewhere, Michael Cole is interviewing Goldberg. The returning wrestler says that this comeback is going to be different, and he’ll be the Goldberg of old.

Flair celebrates early as she brings Naomi to the mat by her hair, but Naomi pops back up to send Flair into the corner doing her father’s ridiculous flip over the ropes onto the apron. The challenger kicks her to the floor and follows with a cross-body over the ropes before a break.

After commercials, Naomi is still throwing cross-bodies and getting a two-count. Flair misses a kick on Naomi in the corner, who counters with a jawbreaker but Flair retakes control with a backbreaker. She keeps focus on Naomi’s back by wrapping her around the ringpost to the crowd’s dislike.

Naomi hits a top-rope blockbuster but can’t get a three-count. The fight goes to the floor where Flair runs Naomi into the steps before more ads. Coming back, Flair is keeping Naomi down with a chinlock, but the challenger escapes again and drops Flair with a springboard kick to the head.  Flair catches Naomi in mid-hurricanrana, powerbombing her instead.

Flair misses her moonsault, which is standard, and Naomi responds with a Rear View, but only for a two-count. After a series of near-falls, Naomi hits a split-legged moonsault for another two. Cole says that Naomi is an emotional mess, which I don’t think I’ve ever heard said about a male heavyweight championship contender mid-match.

In the end, Flair steps back awkwardly from another Rear View, hitting a chop block and Natural Selection for the win.

A couple of fine matches make for an okay episode of SmackDown. Not much is made of any kind of march towards the Elimination Chamber, so it doesn’t feel like that premium show will itself provide anything important leading to WrestleMania.