Quick Raw results: Rollins, KO get one up on RK-Bro 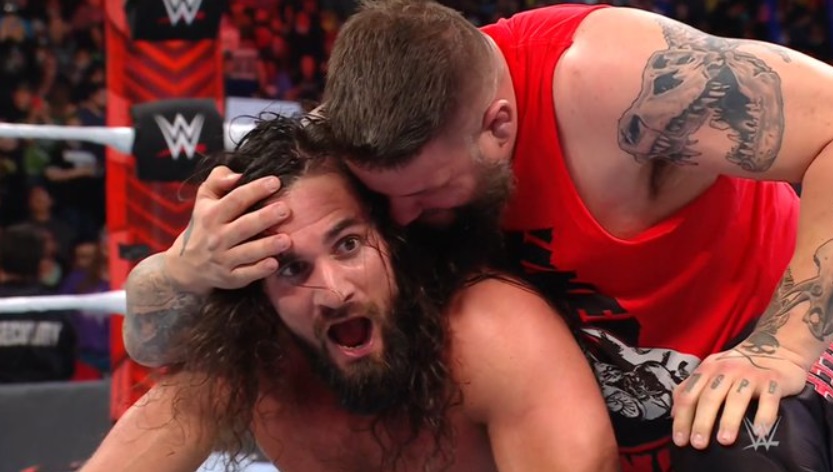 We did you a public service last week be reminding American readers that while the Olympics are underway, Raw is airing on SyFy, not USA. You know who didn’t get the memo? My DVR, that’s who. So while I have no review of this week’s action from Ball Arena in Denver, thanks to the power of teamwork and Twitter, I can at least tell you who did what and who won what. Mea culpa, and my DVR promises it’s on the case for next Monday.

You may recall that these two tag teams are matching wits more often than they’ve been trading blows. After both sides offered some correct answers, Chad Gable messed things up for his side just as he did in the spelling bee, and Randy Orton knew how many grams were in an ounce. There’s a Riddle joke in there somewhere, surely …

Yep, the tag team champs did have to wrestle tonight as well, and they emerged victorious over Solo Cup Company’s favorite duo as Gable pinned Angelo Dawkins.

Bobby Lashley and MVP came to the ring to let everyone know that Lashley was planning on walking out of the Elimination Chamber the same way he walked in: as WWE champion. But you know, the champions always say that.

Styles stayed hot by getting his second win over a top competitor in two weeks, while Priest … yeah I don’t know why they would book him to lose right now either.

Not without help, though. Rey Mysterio intervened by tripping Miz, allowing his son to get a rollup and the ‘W.’

Nikki’s been in pretty tough since turning heel, losing to Rhea Ripley last Monday (albeit after getting one over on her prior) and now staying down for three against Bianca.

K.O. lobbied to have this win essentially reverse last week’s Elimination Chamber qualifier by taking the idea to Adam Pearce and Sonya Deville, who were having none of it. Nice try, though.

Becky Lynch and Lita had what by all accounts was a high quality segment, with Big Time Becks noting that while there would be no Becky Lynch without Lita, there can now be no Lita because there is a Becky Lynch. Or something to that effect. Lynch tried to turn and ambush Lita after the niceties were over, but Lita was ready and hit a Twist of Fate and a moonsault.

Riddle and Seth “Freakin'” Rollins wrestled to a no contest

Interestingly, this seems like it should have been a DQ win for Riddle since interference by Owens brought it to an end, but WWE claims it’s a no contest. OK then.

In more confusing booking, RK-Bro earned a tag team title shot by winning the Quiz Bowl to start the show, but they ended the night by suffering defeat at the hands of reluctant buddies (especially on Seth’s part) Rollins and Owens.