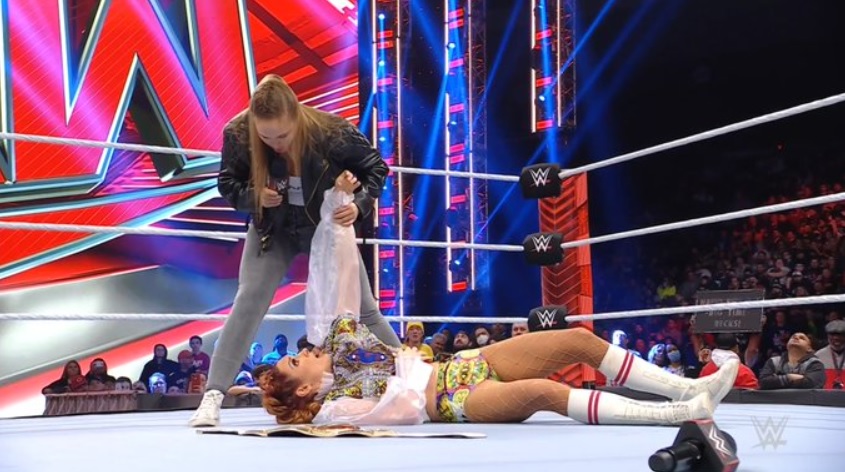 Hello again, old friend. Anyone who’s written for Slam Wrestling for any length of time ends up covering Raw at some point, and I’ve had multiple stints doing that in the past. AEW Dynamite has been my beat for the last few years, but I’m back on Raw for seven weeks and anxious to see what’s in store during the most intriguing time of any WWE year, the weeks between Royal Rumble and WrestleMania. Come take the journey with me, live on USA from the home of deliriously happy Bengals fans, Cincinnati.

Adam Pearce wants to welcome everyone to Monday Night Raw. He runs down the highlights of the Royal Rumble, which conveniently were just played for us in a video montage, before reminding all watching that there’s a roadblock on the Road to WrestleMania called the Elimination Chamber. New WWE Champion Bobby Lashley will be stepping into it alongside five other wrestlers, and maybe he’ll discuss that in more detail as he and MVP join Pearce in the ring. One person has a problem with Lashley acting like he’s really the champ. and that person is Brock Lesnar. To wit, he comes to the ring also, advancing his thought that the only reason Lashley won on Saturday night was Roman Reigns and Paul Heyman. Is that two reasons? I like this version of Lesnar, by the way, as he’s a lot more entertaining than I would ever have imagined he could be. He reassures Lashley that he isn’t coming for the WWE Championship at WrestleMania, where he’ll be gunning for Reigns. One thing: That match will be title vs. title, as Lesnar is dressed to fight and wants a rematch with Lashley right here in Cincinnati. MVP jumps in and rebuffs that offer, saying Lesnar can go to the end of the line, but Brock calls Bobby a “chickens–t” (which is cut out on TV) and it appears they’ll throw down anyway. But not so much, as MVP gets Lashley to head back up the ramp as Lesnar screams what we can assume are obscenities since the sound cuts out again. Pearce reveals that one of the challengers at Elimination Chamber will indeed be the Beast Incarnate, so Lesnar may get the last laugh here anyway.

Things between Rhea Ripley and Nikki A.S.H. have soured badly over the last few weeks, as a video package reminds us.

Ah cool, we’re getting qualifying matches for the other Elimination Chamber spots tonight, which is always a good time.

The height difference between these two is so much more obvious when they’re fighting each other. It’s striking. The trick here is to make Nikki look strong without simultaneously making Ripley appear weak, and this match accomplishes that pretty well until Rhea’s inevitable victory.

“Highlights” from the spelling bee between RK-Bro and the Alpha Academy are played, which reminds me that tonight’s academic challenge is a scooter race. Not sure what that has to do with academics, but we’re about to see Chad Gable and Riddle go head to head. Looks like it’s 50 laps around the arena to decide the winner, and Gable boasts about how some of his Winter Olympian pals have given him a speed skating suit to make him more aerodynamic. Guest starter R-Truth gets them underway — I’ll assume they’ll check in on the race throughout the night.

Alexa Bliss is still working her way back to Raw, but it’s clear she still has some issues to work out pertaining to Lilly.

The Miz vs. Dominik Mysterio

Is The Miz jealous of Dominik? Corey Graves thinks that’s the most ridiculous idea he’s heard since the last time one of his announcing partners said something mean about one of the heels. Miz cleverly makes it appear Rey Mysterio has tripped him from the floor, leading the ref to eject Rey from ringside. Dominik is distracted as a result, allowing Miz to hit the Skull-Crushing Finale and get the three count.

Winner: The Miz by pinfall

The scooter race is on lap 18 of 50, not even pausing as Tamina chases Dana Brooke nearby.

Kevin Owens has a special Road to WrestleMania edition of The K.O. Show in store for everyone tonight, or so we’re told. He pokes a little fun at the “stupendous” marketing tag for Mania this year before revealing that he’s in the Elimination Chamber match … once he’s beaten Austin Theory, anyway. His guest tonight is Seth “Freakin'” Rollins, who K.O. says should be the Universal Champion. Even though he’s not 100 percent, Rollins says Cincinnati is the hottest city in the country, so he wouldn’t miss this appearance. Owens asks the “despicable people in the truck” to roll footage (OK, also lots of still shots) of Rollins’ match against Reigns at Royal Rumble. That makes Owens confess that Rollins is the Universal Champion of his heart (touching!) before Seth claims he has a permanent piece of real estate in Roman’s head. He also has a surprise announcement to make: Rollins is in the Elimination Chamber match. That sets off a funny bit where K.O. tries to get Rollins to say he’ll pull out of the match if Pearce and Sonya Deville don’t put Owens in the match without qualifying. An awkward moment is interrupted by the arrival of Theory, so I guess his match against K.O. is going down now.

Could Theory get a clean win here? Early on, it appears he might, and even after a commercial break, K.O. misses a move off the top rope and has to scramble to kick out at two. Owens connects on a beautiful somersault senton off the top turnbuckle which also isn’t enough to win, and he counters a superplex with a super DVD only to see Theory get his foot on the bottom rope. This is turning into the match of the night. Owens looks for a powerbomb on the apron, but Theory wriggles back into the ring and hits the ATL to win. Yes, a clean win! If that doesn’t impress Vince, nothing will. And now he’s going to Elimination Chamber to boot.

The scooter race is about 3/4 of the way complete, and while the Street Profits hook Riddle up with water, Otis gives Gable some steak sauce. Only the best for Master Gable.

Totally forgot that Dawkins is a Cincinnati native, which means it would be extra embarrassing if he took an ‘L’ in the first 30 seconds, something that Ziggler tries to give him. Dawkins takes a beating for several minutes, but just when it appears Dolph has him in trouble, Angelo pulls off a double underhook roll the dice maneuver that is enough to get the three. Hometown wins are fun.

Important scooter race update: We’re through 49 of 50 laps, and a camera is set up at the finish line in case there’s a photo finish.

Veer Mahaan is coming to Raw! He has a last name now. Is that new?

The moment you’ve all been waiting for arrives as Riddle appears poised to win. “Appears” is the key word here, because Otis is lurking to lay out Riddle right before the line, so Gable easily wins. Riddle challenges Gable to a match, but he’s going to get Otis instead. Sorry bro.

No, I didn’t miss a segment. Pearce comes out right before the bell to reveal the big twist, which is that the winner is in for Elimination Chamber. Could be a make good for Riddle, who was rumored to be the original winner of the Royal Rumble before the Lesnar storyline took over, and it certainly would be popular. That’s if Otis doesn’t take his head off here. Happily, his head stays on his shoulders, and he hits a Floating Bro to catch Otis a little unaware and win the match. The announcers sell it as a massive upset, but let’s be real. Riddle is in for Elimination Chamber.

It takes a while for this match to get underway as Carmella is hesitant to lock up with Bianca. Not going to lie, I would be too. Graves gets in a great burn on Byron Sexton, saying no one makes fun of his gimp mask because he doesn’t wear his in public. Heh. “Is this your girl?” Carmella screams, maybe or maybe not paying homage to Killmonger from Black Panther. Carmella slowing the pace is only delaying the inevitable, however, as the KOD eventually finds the mark and ends things.

Wait, the Alexa therapy session is just a sneaky plug for WWEShop.com? Well shoot. Bliss appears happy with the “replica” Lilly regardless.

In the back, Kevin Patrick takes the Alpha Academy back through both the triumph and tragedy that has made up their night. Gable laughs because he won the scooter race and picks a Quiz Bowl as the academic challenge for next week. Graves thinks RK-Bro shouldn’t even bother showing up.

I was going to say that it’s great this match is starting with so much time left in the show, but then I remembered there’s still a Ronda Rousey segment left on the docket. So Styles and Mysterio will get their fair share of time to work, but they’re not going 25 minutes here, sadly. A handshake right after the opening bell emphasizes what the announcers say about the respect between the two wrestlers. And as you’d expect, this is a fantastic pairing, one that doesn’t make the announcers sound silly for positioning it as a PLE-caliber (that’s going to take some time to get used to) match. It doesn’t go quite as long as you’d want, but the end is fun too, with Styles countering into a Styles Clash to punch his ticket for Elimination Chamber.

Noting that she has unfinished business with both current women’s champions, Rousey comes to the ring and talks through her decision when it comes to which champ she’s going to go after. She’s dismissive of “Rebecca,” saying that Becky Lynch is on her undercard. Naturally, that draws an in-person response from Big Time Becks, who snarks about Rousey possibly taking an appetizer like Charlotte Flair since it’s her first WrestleMania back before moving on to the main meal. She demands an answer, but Rousey gives her a judo toss and says she’ll get an answer on Friday. While Rousey leaves, Lynch claims “Ronnie” is scared of her. That brings someone else to the ring … and it’s Lita. She tries buttering up the champ by playing to her ego, which works perfectly, until Lynch figures out this is leading up to something. Lita says she was thinking Lita and Becky at Elimination Chamber, but Becks says no. Lita doesn’t back down, however, twisting the psychological knife just a little bit more by insinuating that maybe it’s because Lynch is scared. That does the trick, as we’ve apparently got ourselves a match at the next PLE.

Is Raw on during the Olympics? And if so, where?

Raw doesn’t stop. even for the Winter Olympics. But it is moving, because NBC Universal needs USA for winter sports for the next few weeks. So Raw will on SyFy for the next two Mondays, Feb. 7 and 14. Don’t say we didn’t let you know.

Pretty good stuff for the first show after Royal Rumble, and it was great to see the pieces fall into place for Elimination Chamber so quickly. Raw also had the benefit of having Lesnar at his most entertaining, along with Rousey and Lita, which it might not always have over the next few months. Oh yeah, and there were two really good matches as well.