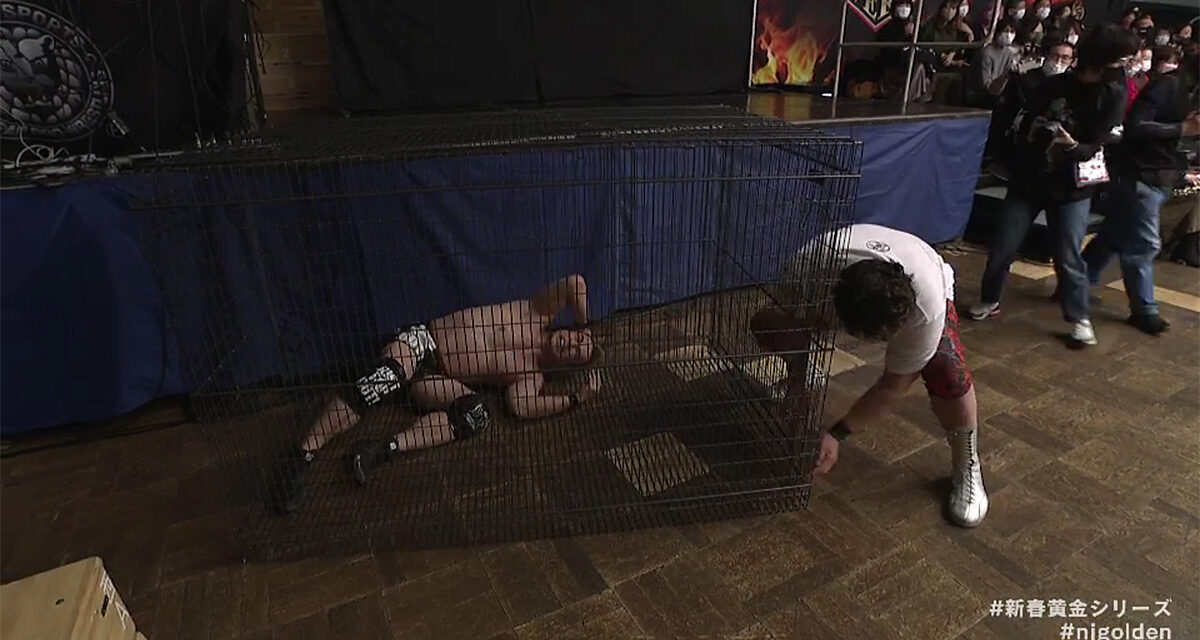 Perhaps signaling what the stipulation will be for their upcoming King of Pro Wrestling Title match, Toru Yano had a surprise for champion Minoru Suzuki and the rest of Suzuki-gun on night three of the New Years Golden Series tour.

Toru Yano came down to the ring dragging a cage/animal crate with him.

“What the hell is this?” asked an incredulous Kevin Kelly.

Suzuki attacked Yano immediately stomping him into the ground and punching him in the face. Suzuki got a two count with his sliding kick.

Looking for some revenge, Suzuki retrieved a pair of handcuffs from Suzuki-gun’s corner. The official attempted to stop Suzuki from introducing them into the match. Suzuki shoved him off. 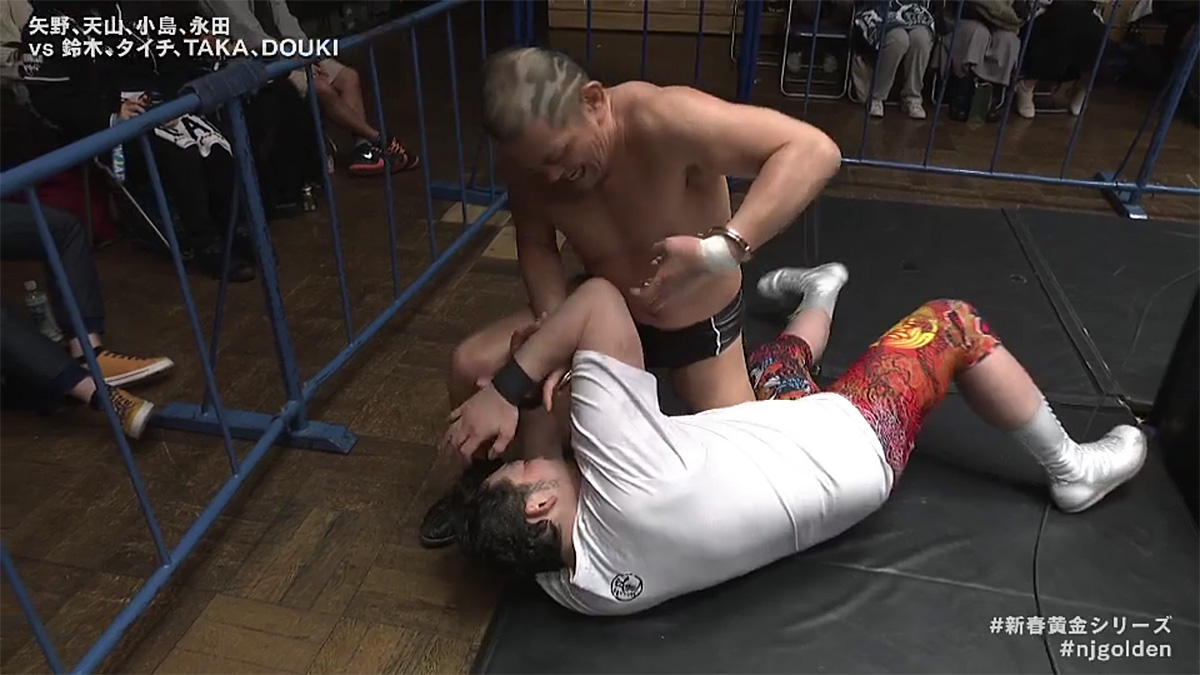 With a demented smile, Suzuki picked up another pair, handcuffs himself and then tries to attach those cuffs to Yano’s so they are locked together.

Yano fights off the attempt. A reverse atomic drop allows Yano to tag out.

The two don’t remain separated for long. Minutes later, Suzuki throws Yano into the steel barricade and tries to cuff himself to Yano again but fails.

Taichi ends up winning the match for Suzuki-gun with a Black Mephisto on Kojima.

Once free of Suzuki, Yano throws Taka into the cage and locks him in. Yano shoves the cage towards the ring and just walks off.

“Was this the original concept for Kennel from Hell?” says Kelly in a smart mark reference. 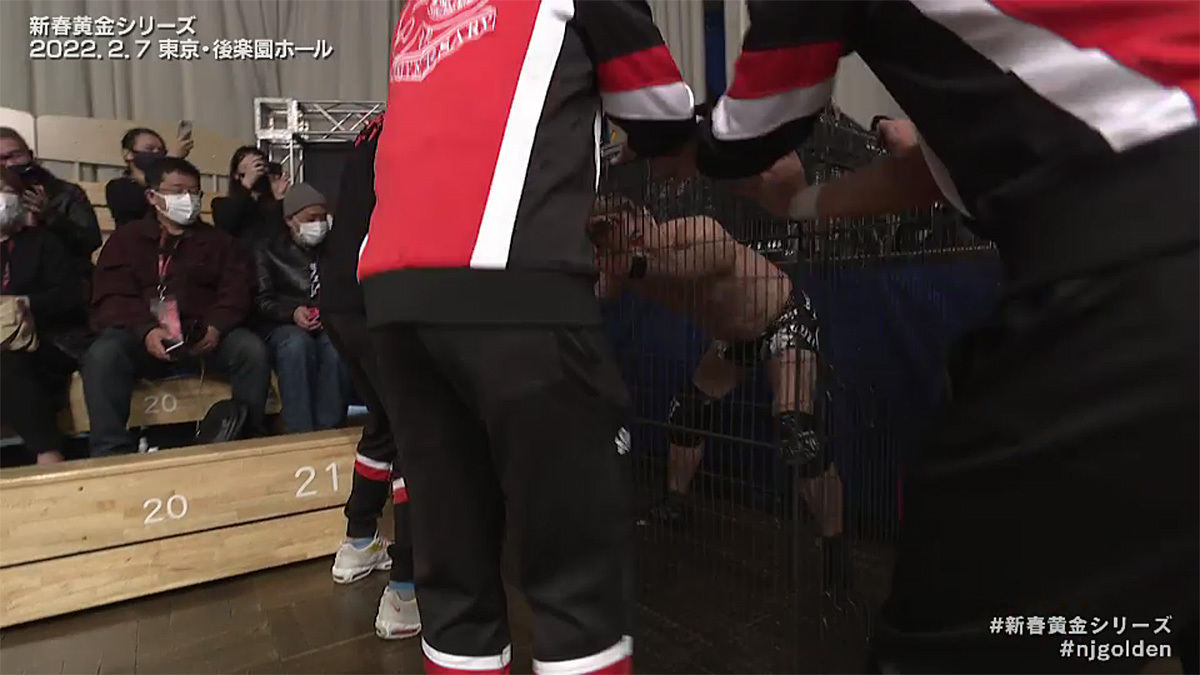 A caged Taka goes for a ride. Courtesy: NJPW.

A furious Suzuki kicks the cage as he storms by to chase Yano to the back.

In a hilarious moment, Taichi and Douki leave the ringside area and nobody stops to free poor Taka.

“Taichi! Taka is still in the cage!” yells Kelly to no avail.

The Young Lions aren’t sure what to do or how to unlock the cage so they push Taka, cage and all to the backstage area.

Yuto puts up a good fight but a haymaker from Khan knocks him out for the pinfall.

Hiromu is still wearing his lucha mask. I guess the challenge to remove it with a 10,000 Yen reward ($100 USD)  is still on. The Young Lions do rip off Hiromu’s mask.

“What are they going to do? Split the money?” asks Kevin Kelly. 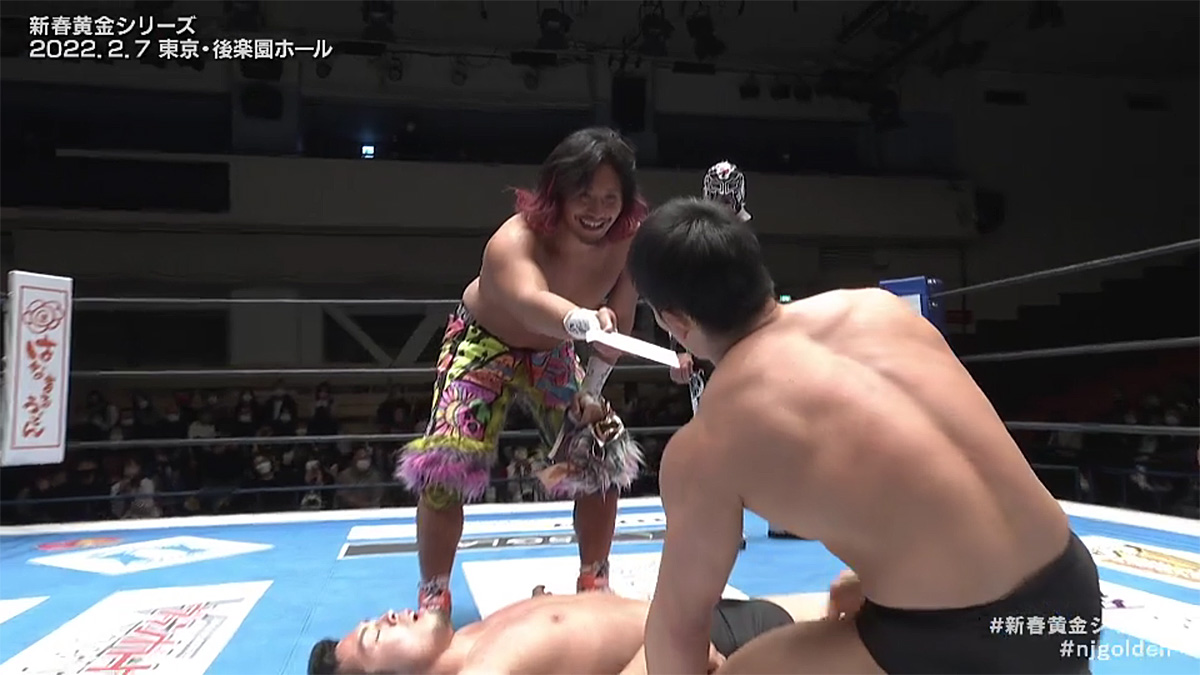 Hiromu is a man of his word. Courtesy: NJPW.

Bushi points out to Hiromu to remind him that he owes the Young Lions some cash. A smiling Hiromu hands over the money in an envelope. 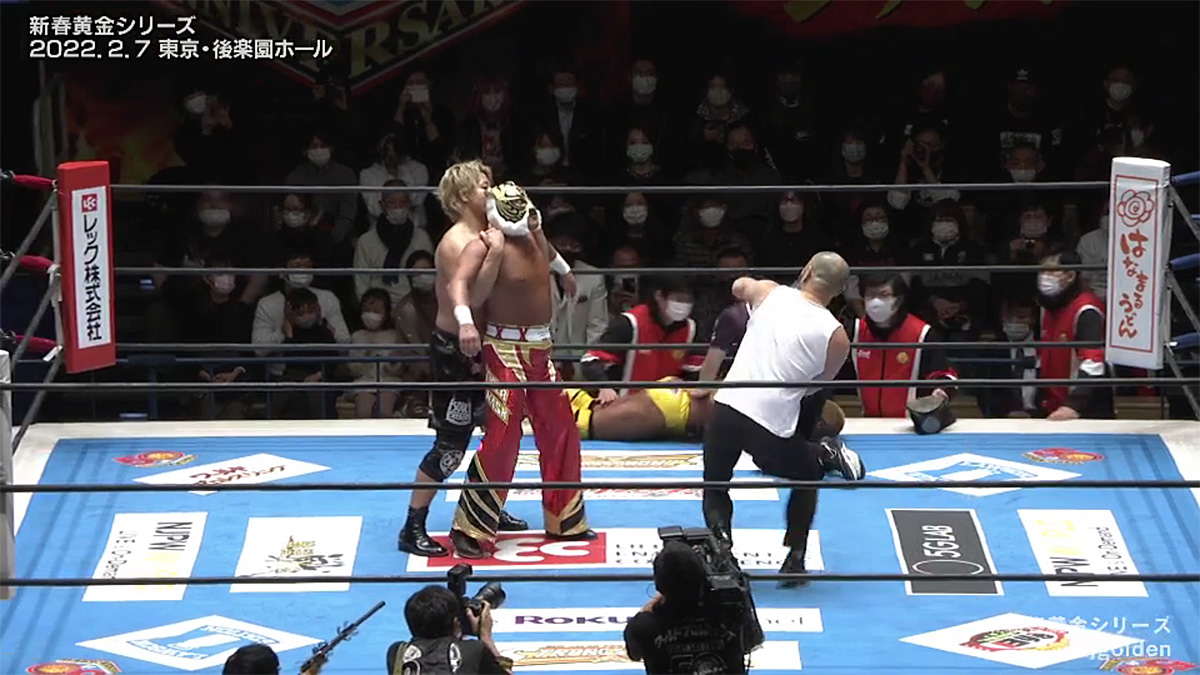 Tiger Mask takes a fist of brass to the face. Courtesy: NJPW.

Yujiro Takahashi pins Honma with Pimp Juice. Yujiro holds Mask so that Gedo can punch him with his brass knuckles.

Yoh saves Ishii from getting clobbered with Sho’s wrench. Yoh picks up the wrench and after some reflection hits Sho in the head with it. Chaos is disqualified. The crowd cheers their approval. Yoh pummels Sho after the bell. Young Lions have to pull him off.

Takagi pins Makabe with Last of the Dragon as Naito works over Okada’s knees trying to injure him before their big match.

Taguchi and Wato set up Kanemaru for an assisted stunner. Taguchi pins Kanemaru.