MLW Azteca: Mads Krügger faces the Number of the Bestia 666 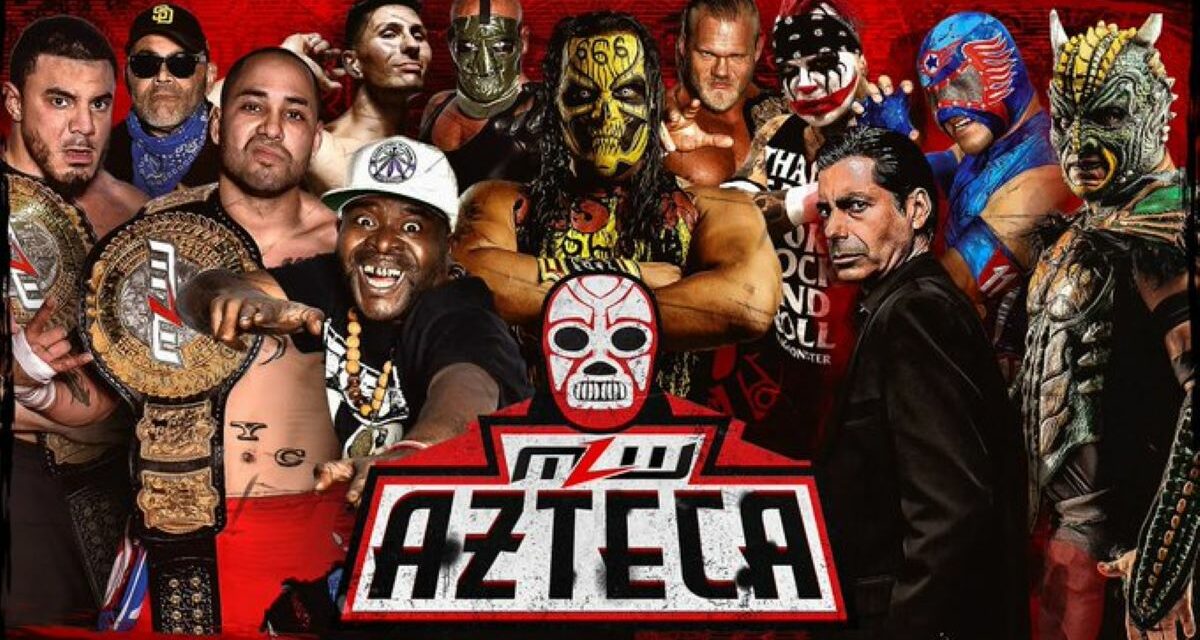 Major League Wrestling is still in Mexico, and Mads Krügger gets a shot at the main event match.  But the Black Hand of Contra unit will face The Crash’s own Bestia 666 in a Tijuana Street Fight.  Best channel your inner Iron Maiden and it’ll be time to prepare for The Number of The Beast.

But first, we get a cold open where Cesar Duran is with the Aztec Stooges ™ looking for, and facing, Richard Holliday and the MLW Heavyweight champion Hammerstone.  Your Boy Hammer comes fresh out of…some…dungeon (I dunno, it was a blur and I didn’t have my cookies to dip into my milk-infused rum). Duran dares Hammer to strike, but Holliday tells him not to because it’s a trap.  Duran praises Holliday’s smarts, and notes that if Hammerstone does hit him, he will be stripped of the title. But, El Jefe wants to gets some use of the Dynasty members tonight, with Holliday in a Barrio Brawl, and he has plans for the champ once his arm heals.

We go to the Auditorio Fausto Gutierrez Moreno in Tijuana, Baja California, Mexico.  Your commentators Joe Dombrowski and Rich Bocchini have the call, and the First Match is a hot one for the…

As Rivera and Boogie get in the ring, they rile up the fans with some cheap heat, and the fans respond in kind (and you have not lived until you see a kid in a Pagano shirt flipping off the rudos.  So cute).  Then Aerostar and Drago come to the ring, and commentary references (broadly) to Lucha Underground with mentions of them fighting in Boyle Heights and being Trios champions.

As the bell rings, 5150 try to jump the hometown favorites, but Aerostar and Drago hit double team moves to 5150.  Big move of the night has Aerostar up the top rope, and nails a backwards cannibal senton to the all three guys on the floor.

But 5150 still have moves, as Rivera takes it to Aerostar, and tags in Boogie, as he hits his springboard German suplex with great effect.  The match goes back and forth, but 5150 put an end to this with the 456 finisher to get the pin and the win.

Your Winners via Pinfall, and Still MLW Tag Team Champions:  5150

During the show, Bocchini announces that 5150 will face Von Erichs in Dallas, TX.  Obviously this was taped, and I bring it up because…well, check the News and Rumors section to see what I mean.

Emilio Sparks is with the Bomaye Fight members Alex Kane and Mr. Thomas.  Kane reveals that he has a new sponsor…Crybaby Calvin. He shows off the tees, and says all proceeds will goes to Tankman legal fees.  After he gets out, Kane states his mission…will be a submission of Calvin Tankman.

(Author’s Note:  Those tees are available at ProWrestlingTees.com if you actually do want to buy one.)

We get a vignette of a TV screen…with an hourglass shown, before the screen goes to black. Could it be…?

We go to Richard Holliday, who’s with Alicia Atout and Hammerstone.  He is freaking out over the upcoming Barrio Brawl, and doesn’t know how to prepare. Your Boy Hammer tries to calm him down, since it’s like any other match…except this is a match with maybe knives, spikes, etc. Holliday freaks out so much, he takes the Air Pods out, and gives them to Atout for safe keeping.  He needs a weapon, and wants to use Hammerstone’s Championship belt, but Hammer says that dog won’t hunt.  Soon, the Azteca Stooge ™ summons him, and Holliday heads off in a huff.

And now for some more lucha love, here is…

We’re told this is a big rivalry in The Crash between the high flyers.  And let’s dispense with the “We’re Not in Kansas, anymore” or “I bless the rains down in Africa” low hanging fruit, because, Toto shows he has some serious moves, as he takes the fight to Proximó early, and Toto  connects with a tope con giro to Proximo on the floor.

Toto is totally in control, but Proximó gives him a run for his money.  Outside the ring, Toto delivers a Mexican Destroyer on the concrete floor, and he sends Proximó inside to cover for a two count.  The match is fast and furious, and Proximó has lucha moves of his own with his own tope con giro  that crashes Toto to the guardrail.

Proximo with a Tope con giro of his own! And he goes into the front row he goes.#MLWAzteca |
https://t.co/vBGOgTY6sb pic.twitter.com/DhIBNyun4n

Back in the ring, Toto gets Proximó with a fireman’s carry slam.  He goes up top, but Proximó catches him and delivers a Spanish Fly to cover for the win.

Your Winner via Pinfall:  Proximó

We get plugs for MLW Super Fight that will be happening on Feb 26th, in Charlotte, NC as the Opera Cup winner Davey Richards faces Hammerstone for the MLW Heavyweight belt.

Von Erich with a message for 5150, stating they’re coming for the belts in Dallas, TX.

Yeah, about that… head to the News and Rumors section.

For the first time since Contra Unit imploded, Jacob Fatu talks, and what interesting is that the interview is Fatu’s first person account of growing up in the business, being the son of The Tongan Kid, and his wrestling family.    MLW did a similar segment on their YouTube channel if you want to check that out.

We cut to some kind of prison, as El Jefe glowers from above.  Holliday is taken to…I dunno, a prison yard, and Duran mentions this is the start of the…

(Author’s Exasperated Note:  I know that MLW is trying to resurrect the spirit of Lucha Underground, and I may one day tackle this in greater detail, but given their legal issues with WWE, I just don’t have the heart.  Furthermore, I don’t have the heart to recap this match, nor do I want to do my usual Squash recipes.  What’s a Lucid Luchador to do?  Revert to the best option:  Haiku)

El Jefe gets even.

Your Winner via Pinfall: Pagano

Not my best Haiku, but not my worst.

So let’s get to the Main Event, which is a…

This is the first time since 2019 in Chicago that Bestia has been in MLW, according to Bocchini.  This match is a classic size (Krügger) versus Beast (666) match, and Krügger manhandles the Tijuana Gremlin from the get go.  He goes for the big boot, but Bestia ducks and he gets trapped on the top rope, and Bestia drops him to the floor.  Bestia goes for a tope suicida, but Krügger catches him by the throat, and puts him back on the ring apron.  Bestia gets a thrust kick and a huracanrana to the Black Hand, and then Bestia goes after Krügger with various chairs.

Krügger grabs Bestia and then delivers with an Undertaker-like leg drop to Bestia on the apron.

Pretty soon, a garbage can o’ plunder gets entered, and a Krügger hits a cookie tin to Bestia’s unprotected head.  Bestia fights back with said tin, and a cheese grater to the chest and head of the big man, but Krügger gets Bestia in a backbreaker, and that follows to…

Ads (This match is brought to you by Tequila.  Remember, kids:  Jose Cuervo is not a tequila, and is only appropriate for girls who continually make poor life decisions.  But, enough about Provo, UT.)

Back to the ring, Krügger looks to take flight with his own tope, but gets swatted by Bestia with a chair.  Back in the ring, Bestia keep up the offense, but Krügger gets him set on the top turnbuckle.  Bestia fights for his life, and manages to deliver an avalanche huracanrana to the Black Hand.

Victory is close for Bestia 666, and he rushes at Krügger, but The Back Hand grabs him and nails a facebuster to the chair seat, and he covers for the one, two, and three.

Krügger walks to the back stage with his hand held high, as the show fades to black.

Ok, I know I was in a pissy mood last week, but this show turned it around (plus, I got my Rum and cookies, so…all better).  The tag match really was a good way to start things up, and everything in between was good or better.  Bestia 666 got the best out of Mads Krügger, and that is huge.

The Barrio Brawl…?  Eh, it was there, but it wasn’t enough for me to turn sour on the product as a whole.

Next week will be the final MLW Azteca show that promises lots of title matches, so see you in seven!