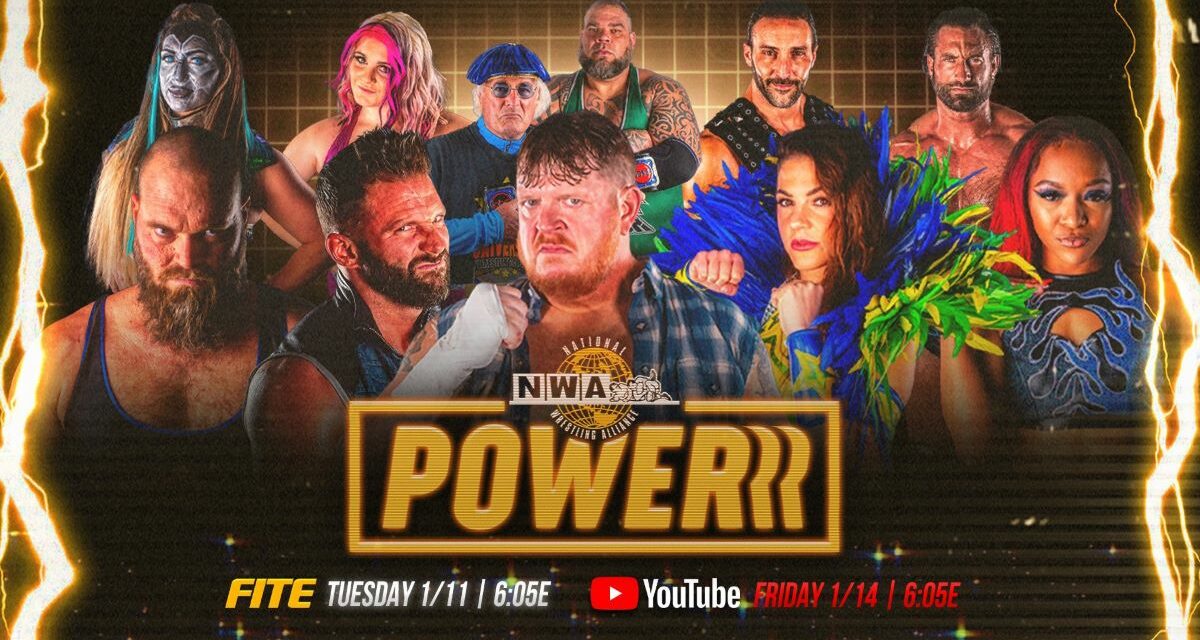 Can you feel how red hot the National Wrestling Alliance is these days?  It must be because you stepped Into The Fire, as Matt Cardona wants to save the NWA from its boring ways.  Naturally, The NWA Heavyweight Champ Trevor Murdoch has a couple thoughts about that.  With a jam-packed card, let’s hop to the GPB Studios, in Atlanta, GA.

The show starts with a cold open, as May Valentine is with Melina. Melina feels that she always has to continually prove she is worthy of The Burke, after twenty years in the business. That said, Melina feels she needs to be the number one contender permanently until she achieves the goal of getting The Burke. Valentine tries to be the good friend, and she wants what best for her, but asks her what if she gets fired for that? Melina shrugs and says, “I guess we’ll see.”

We then are joined at commentary with Joe Galli, Austin Idol, and Velvet Sky.  Yes, expect lots of bickering, and expect me to try my damnedest to tune out the Idol/Sky Bicker Hour of Power™.  That’s won’t be hard to do as we have for your First Match of the night for a shot at being the number one contender to face Kamille for The Burke, it’s a… 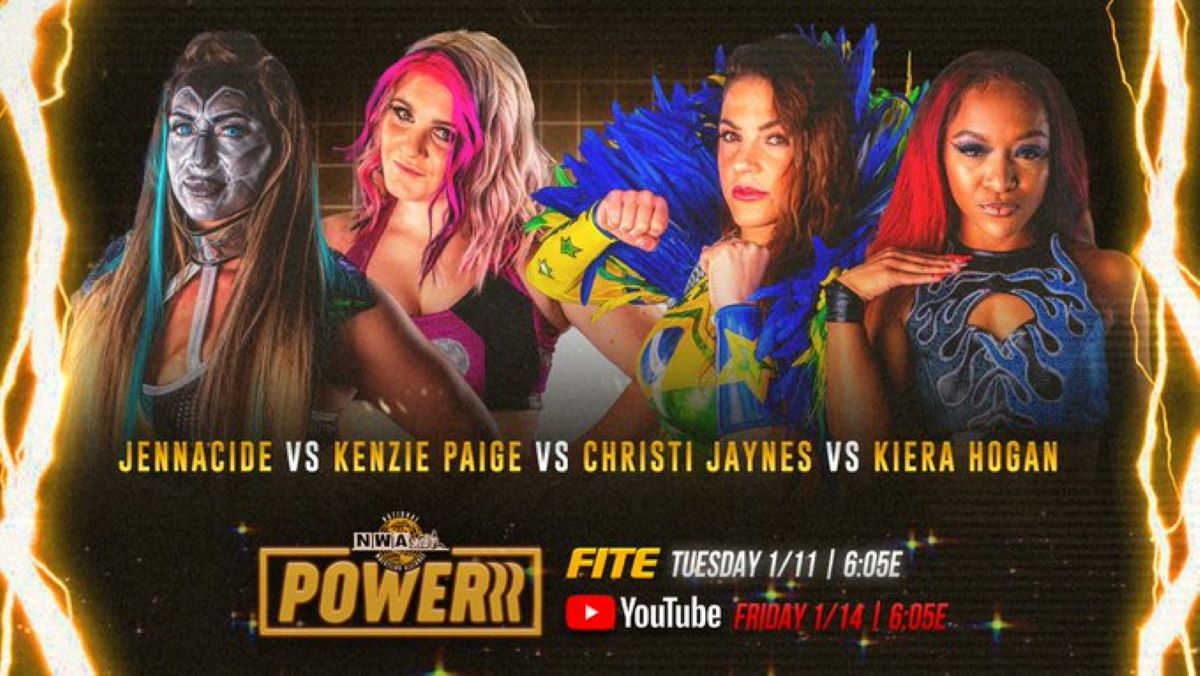 This is Jaynes’ debut POWERRR match, but the fans are solidly behind Hogan.  The bell rings and everyone dogpiles on Jennacide, but the Cyborg is able to shake them off.  Paige dives to Jennacide outside the ring, and Hogan delivers with a baseball slide to Jaynes in the corner.  Hogan covers and Paige gets back in and breaks the count.  Paige gets in the mix, and gets Hogan in a short flatliner to cover for a two count.  Jaynes gets back in, send Paige to the corner and hits a high knee to her face.  Jennacide is back in and gets Hogan in a wheelbarrow, and Jaynes nails with a cutter to cover for a two count again.  Paige chops away at Jennacide, but…nope.  Not happening.  Jenna lays out Paige and covers, but Jaynes tries to steal the cover, and the Cyborg ain’t putting up with the Brazilian Wonder Woman.  Jaynes thinks she’ll fare better than Paige going against Jennacide, but…yeah, you know how this plays out.

Big move of the match has Jennacide slap the sharpshooter to Paige, but Jaynes get behind the Cyborg with a sleeper to, and Kiera gets Jaynes with a sleeper herself. Jenna has no choice but to break the submission and pushes Hogan and Jaynes to the corner.  Jennacide rushes to the corner, and Jaynes ducks out of way, as Jennacide’s momentum hits the ring post.  With Jennacide out of the ring Hogan and Paige put boots to the Bionic One, as Jaynes goes up the turnbuckle with a beautiful moonsault to all three women.  Back in the ring, Hogan and Jaynes face off, but Hogan hits the Face the Music (cradle neckbreaker) finisher on Jaynes to pin her.

Your Winner, and Number One Contender for the NWA Women’s Championship:  Kiera Hogan

We head backstage again with May Valentine, and she’s with The OGK, but La Rebelión and Homicide are there as well. MechaWolf goes for the jugular and says OGK lost their jobs (ouch!  Too soon!), and tell Matt Taven and Mike Bennett to get in the back of the line. Bennett and Taven says they’ll face all three anyplace and time; they just need a third person to back them up.  Valentine knows things are getting a little heated, and quickly sends it back to the ring.

We head to The Podium with Kyle Davis, and he has “The Dane Event”, Jax Dane. Dane knows that Anthony Mayweather still wants a piece of him.  Well…how about he fights his student, Big Strong Mims?   Dane goes on to add that whoever wins can face him. While he’s thinking about it, Dane can’t help but notice that “legend” gets thrown about, like with Jazz at Hard Times 2.  No sooner does he say that, Rodney Mack comes out and runs Dane off.  Folks, the moral of the story is:  never disrespect the Female Fighting Phenom, lest you face the Red Dog.

But it’s time the teacher faces the student in… 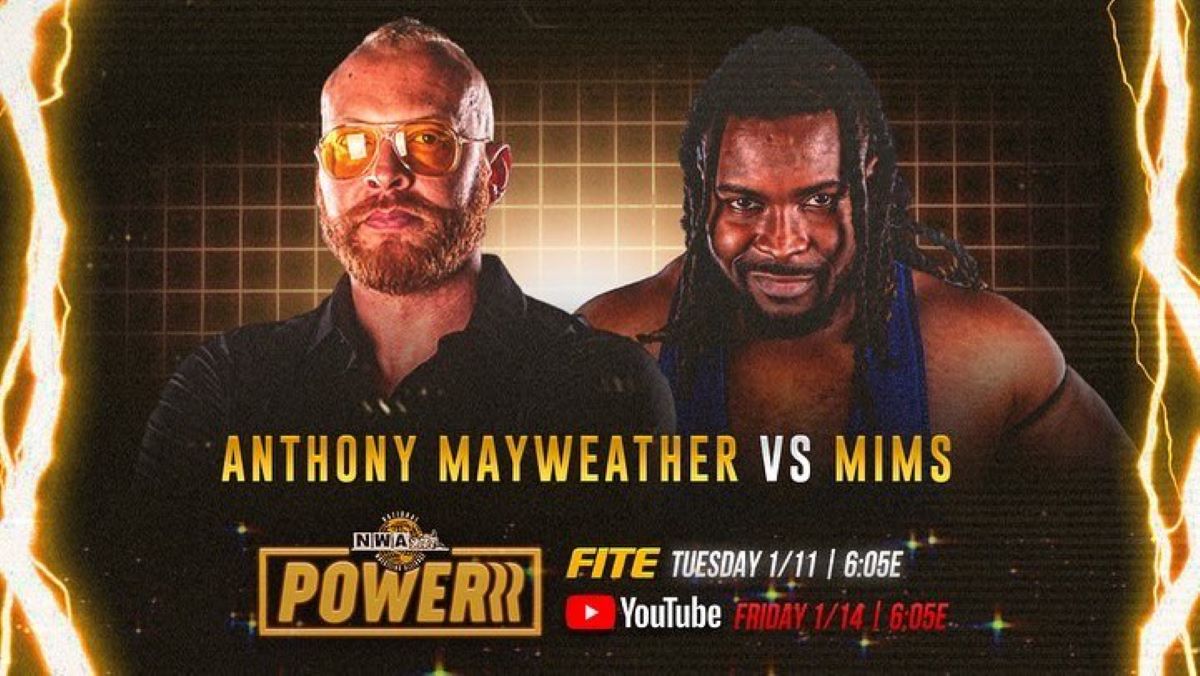 This is less a wrestling match, as it is a display of conflicted feelings.  Mayweather Wants Mims to bring his A-game, and Mims doesn’t want to play into Dane’s mind games.  Mims has opportunities to cover Mayweather and pin him…but can’t go through with it.  At one point, he walks out of the ring, with Mayweather following, telling him too buck up and to face him in the match.  Mims starts to agree, and follows Mayweather…and then throws him in the ring, as the ref counts out Mims.

Your Winner via Countout:  Anthony Mayweather

You can tell it wasn’t what Mayweather wanted, but Mims knew this was the right decision.

And now for something muddled, May Valentine is with Cyon about being the son of an NWA champion. Cyon goes off on a tangent on how he apologies to no one, and that he owes no one an explanation.  He wears the mask because he wants to be judged on his actions in the ring. Tonight, he promises a war with Judais, and I say good luck with that.

Now, for the tag team match you never realized you wanted, it’s the… 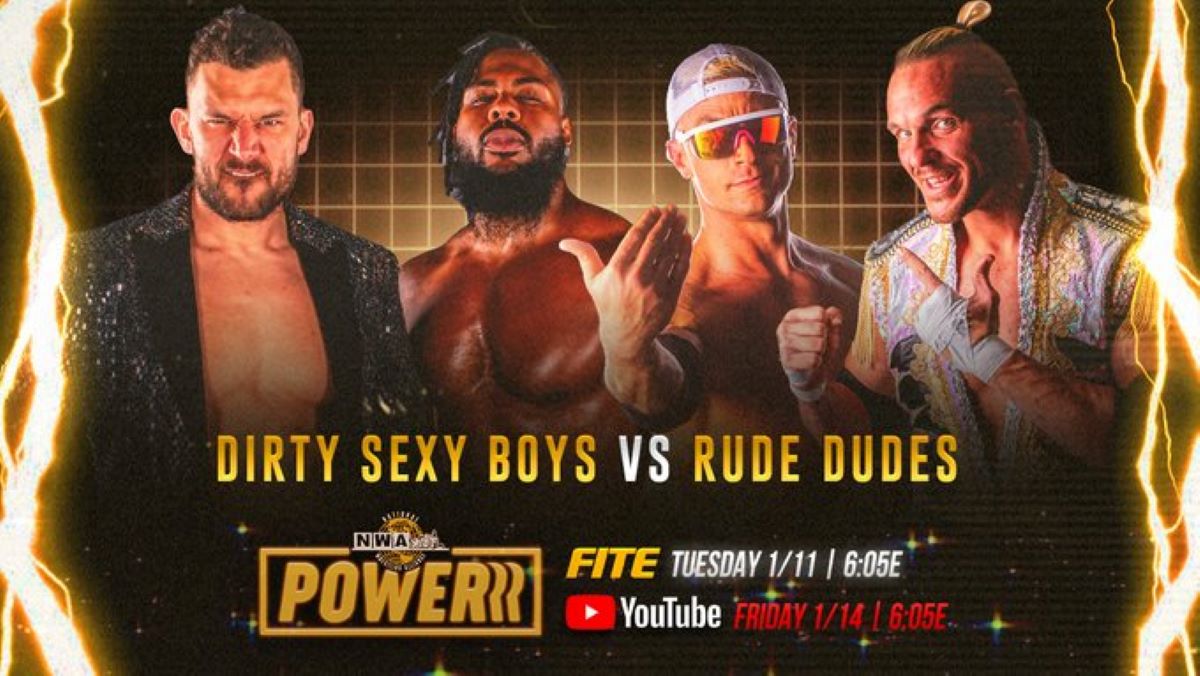 Quick Aside:  This is the first time in the NWA Adonis was introduced by his name, rather than as “El Rudo.”  Not sure it if was an oversight by Davis, but it was interesting to hear it out loud

Equally interesting to hear, as DSG enter the ring, the fans chant “Let’s Get Weird.”  I am onboard for all this.  The early part of the match favored Tha Gawd and Dango, but wouldn’t be long at the Powers of Rude Dudeness ™ take control and you have a Dirty Dango in Peril.  Stanley unlock his Dudeness (or Dude-a-rino, if you’re not into the whole brevity thing), and hits the ropes and places a boot to cover Dango, but he kicks out. Stanley elbow drops and covers for another two count.  Tag to Adonis, who slingshots Dango hard to the corner turnbuckles.  He gets Dango in a headlock, But the Dirty One backdrops El Rudo to break the hold.  A quick tag, and JTG is Tha Gawd En Fuego, and just cleans house on The Rude Dudes.  A neckbreaker to Stanley gets JTG the cover, but Adonis breaks the hold.  Dango sends Adonis outside, and Stanley tries to get in the mix, but JTG manages a…Errr, a wedgie uranage, and a Dango leg drop gets the pin and the win.

Your Winners via Pinfall:  The Dirty Sexy Boys

Davis is at The Podium with Aron Stevens. Stevens says that war is at the door. War!  HUH!  What is it good for?

Well, enjoy the earworm for the rest of the night folks, as you’ll need it to drown out the Idol/Sky Bicker Hour of Power™, as it leads to the… 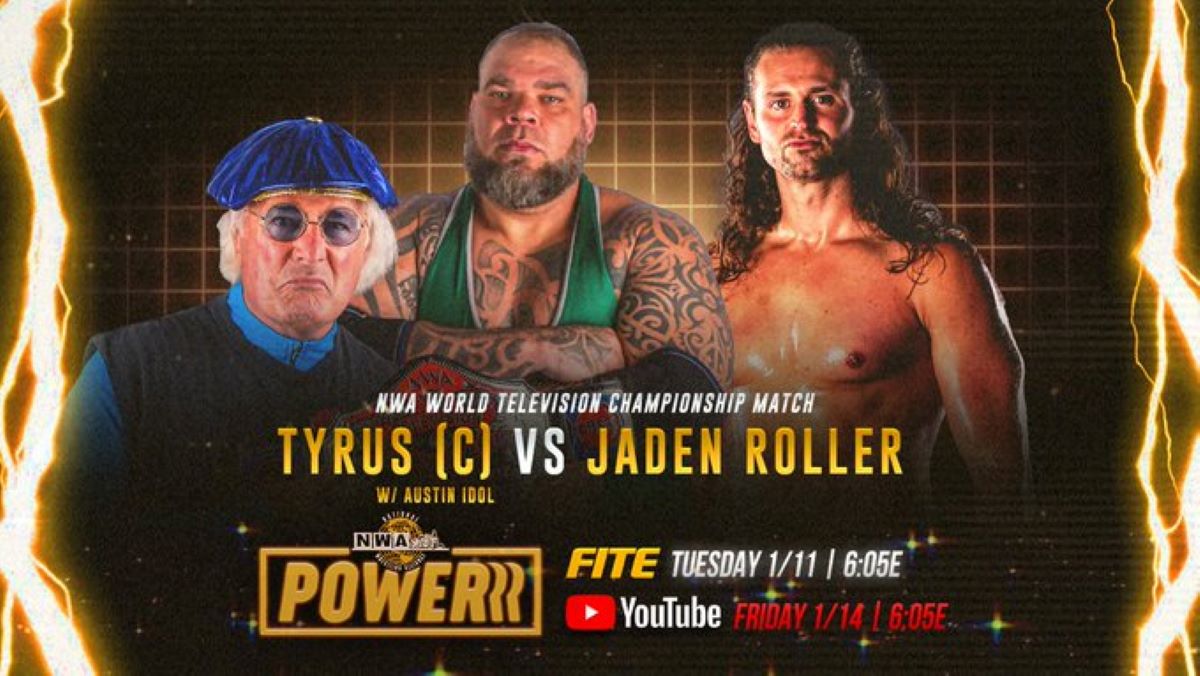 Rider has a good start, taking out the legs of Tyrus, but pretty soon, it’s all Man-ster.  I would have found a squash recipe for this squash match, but really, it was less than six minutes so this gets a pass.  The same can’t be said for The Heartthrob, as Tyrus hits the heart punch, and thanks for playing, Rider.  Be sure to get your parting gifts on the way out.

We get highlights of the new NWA USA show on YouTube, and you can click here to catch up on the action.

But it’s time for… 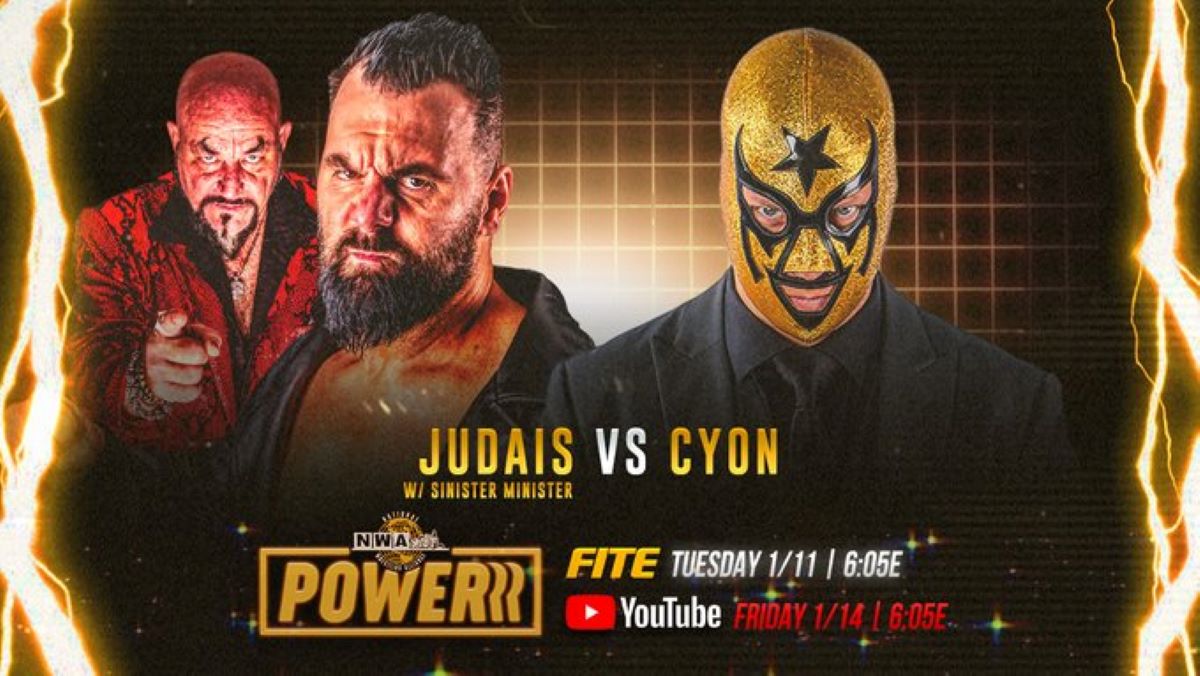 Judais (with The Sinister Minister) vs. Cyon

Before we get to the match, I missed something in my recap last week.  At the end of the credits, we got Sal Rinauro, doing…well, see for yourself:

Did you stay till the very end of #NWAPowerrr?

You never know what to expect. This time your pal(?) was waiting… 👀@SalRinauro #home pic.twitter.com/RL6s0K8Ar7

I bring it up because, as I tell my nephews, you never skip out on credit at the end of Marvel movies.  Nor should you for the NWA, apparently.

In any case, Judais has the size but Cyon has the fight, even though Judais just stomps away and manhandles Cyon at every turn.  Again, I was about ready to go to Pinterest for another squash recipe, but Sal Rinauro comes out to beg The Sinister Minister to be part of his evil fold.  As Rinauro gets on the apron, Judais uses Your Pal Sal as a human javelin and launches at Cyon, and the ref has to call the match.

Your Winner via Disqualification:  Cyon

Proving that Cyon is a sore winner (literally), Rinauro loses it and goes punching away at Cyon, tearing away at his mask, and then calling The Sinister Minister his father.  Okayyy…?

Now we head to the Main Event of the night… 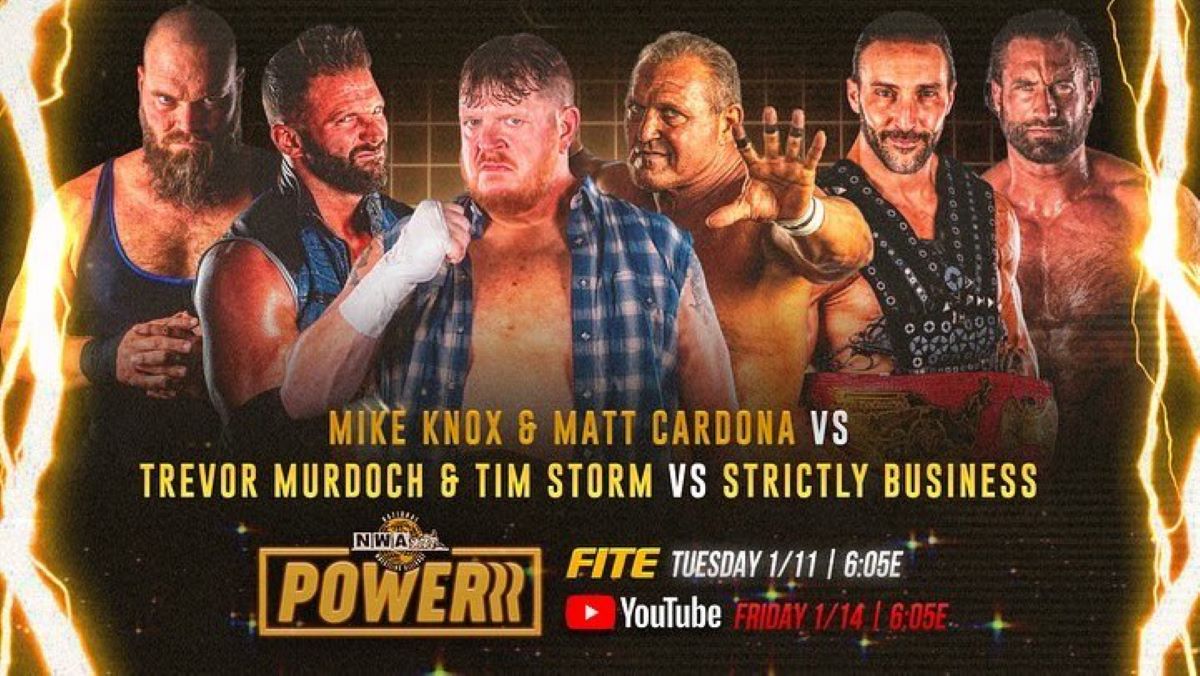 Cardona is ready to start against the NWA Heavyweight champ, but as soon as the match starts, Cardona weasels out, and gets the quick tag to Latimer.  Murdoch locks up, and works over Latimer, but The King of All Evil goes back to tag Cardona, and he wants none of this.  So Knox and Storm mix it up, and Knox overpowers Storm. Knox tags to Adonis, and the National Champ gets a boot to Storm’s face and covers for a two count.  Storm tags in Murdoch, and they double team Adonis.  With Murdoch in, he shoots Adonis to the ropes but he reverses, and Knox kicks Murdoch in the back, and Adonis takes advantage with a tag to Cardona, and now he’s happy to get in the ring and work over the champ.

Murdoch is the Champ in Peril, as Knox and Cardona keep the beat down.  Murdoch is lying in the corner, and Cardona flips off Storm.  As he goes for a facewash, Murdoch gets out of the way at the last minute, as Cardona gets crotched on the bottom rope (and that ain’t easy to do.  Also:  Owtch!).  Murdoch gets the hot tag to Storm to run roughshod, as the match devolves to a Pier Six brawl, with every man hitting big moves.  Cardona isolates Storm, and delivers Radio Silence (Leg Lariat drop), and covers for the one, two, and three.

Your Winner via Pinfall:  Matt Cardona and Mike Knox

After the match Cardona and Knox have their hands raised high in triumph, and this is not the last we see of them as the show goes to credits, and…nope, no weird messages by Rinauro this time.

This was bell-to-bell action, and probably the most matches I’ve ever encountered since covering NWA in recent memory.  That’s not a complaint; it’s a pleasant surprise.  From the Womens’ Fatal Four way to the closing Main Event, the pace was crisp.  Even the matches like Mayweather/Mims and Judais/Cyon served their purpose.

If nothing else, this is a match that will justify the NWA All Access price tag.  So while you take the time to subscribe on FITE.TV, we’ll see you in seven!