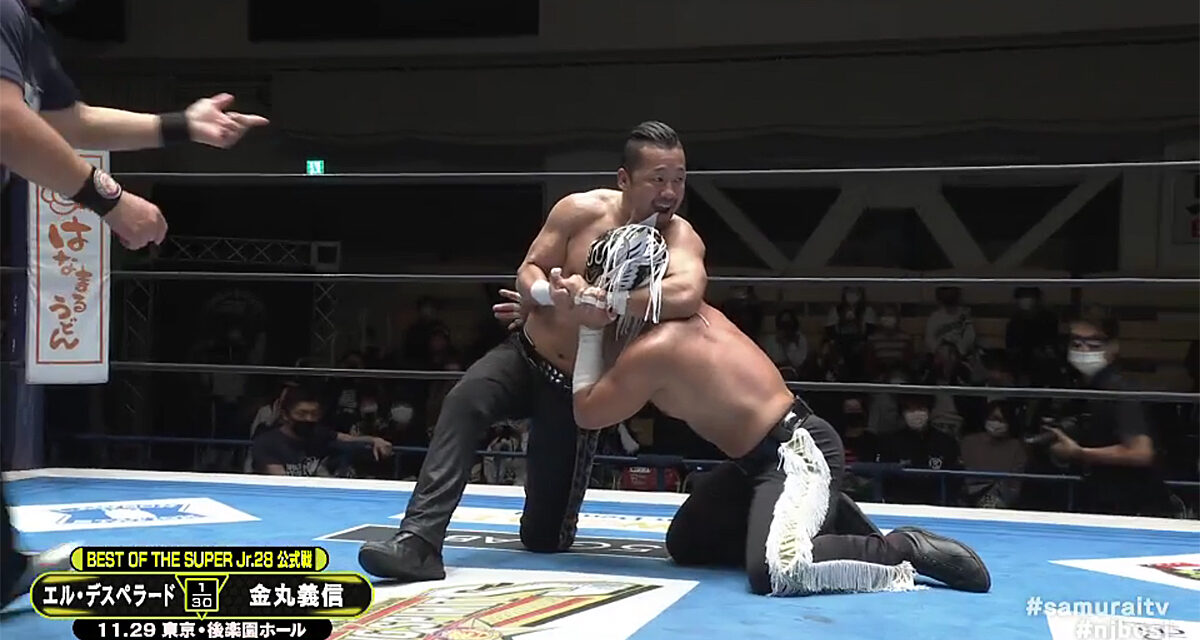 Tag team partners and former four-time IWGP Junior Heavyweight Tag Team Champions El Desperado and Yoshinobu Kanemaru faced off in a rare encounter on night seven of the Best of the Super Juniors tournament. Desperado is the current IWGP Junior Heavyweight Champion. A championship match with him is part of the reward for winning the BOSJ tournament.

At the start of the match it was apparent that the friends and partners wanted to win without severely hurting or harming the other.

Desperado held his hand out to Kanemaru who promptly rolled out of the ring. Kanemaru demanded the official count him out. Desperado clapped along with the crowd encouraging Kanemaru to get back into the ring. Desperado slid out breaking the official’s count. Desperado asked to be counted out too as the partners argued on the floor.

The official began his count again. Desperado and Kanemaru agreed to slide back into the ring at the same time. Kanemaru stabbed Desperado in the the back though by hurling Desperado into the barricade then diving into the ring. Kanemaru’s plan was foiled when Desperado beat the count back in though. Kanemaru attempted to pin Desperado over and over again. He does get a two count through all of that though. 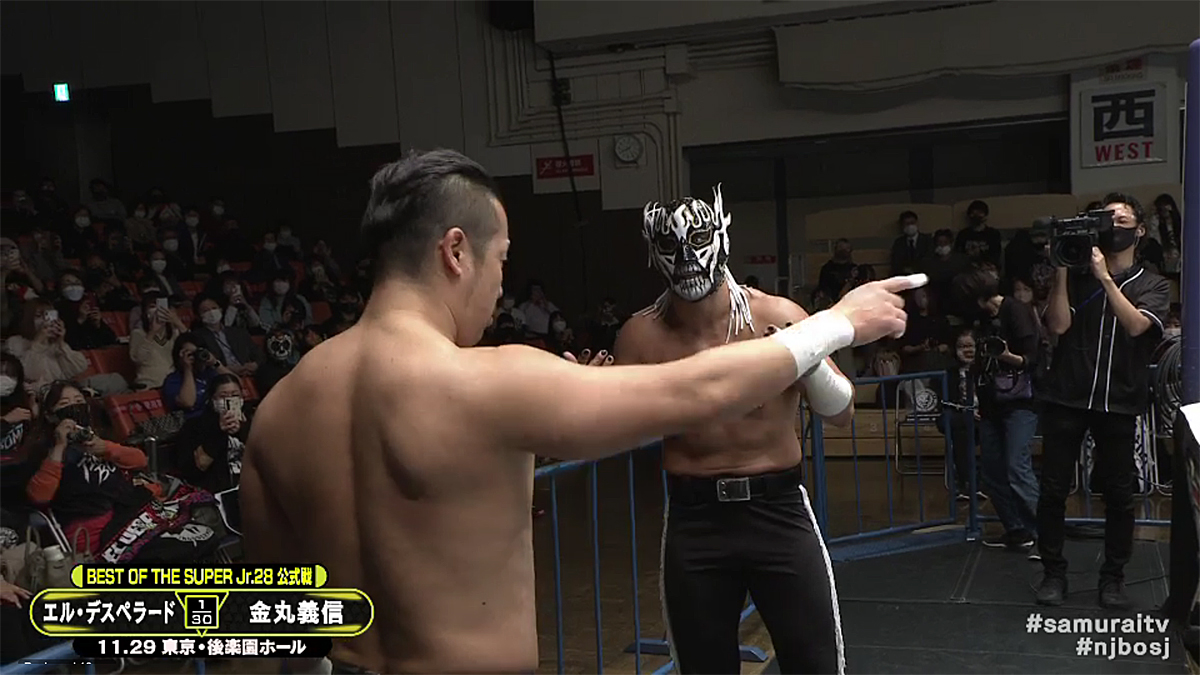 The partners debate who should be counted out. Courtesy: NJPW.

Kanemaru wears down Desperado with a headlock. The headlock goes on and on with Desperado trying his best to escape. Desperado breaks free arm dragging Kanemaru. Kanemaru dodges the second attempt slapping on the headlock again. Desperado rolls Kanemaru to the floor. Desperado rakes Kanemaru’s eyes to free himself. Desperado throws Kanemaru into the steel post. Kanemaru whips him into the ringside barricade and DDTs him on the arena floor.

Back in the ring, Kanemaru progresses to a head scissors on Desperado. Desperado turns that into a leg lock submission but falls victim to another headlock soon enough. Desperado chops and back suplexes his way out of the submission. Desperado targets Kanemaru’s leg and knee with a figure four.

Kanemaru whips the official into Desperado. Desperado shrugs him off and is victorious with a Pinche Loco.

At the end of the evening, Sho moved into the lead with 10 points over second place Takahashi, Kanemaru, Desperado and Taguchi.

Taguchi brings a foam metal bar to the ring to mock Douki. Douki snaps and attacks him. Taguchi whacks Douki in the head with his foam pipe. The official admonishes him. Taguchi bends the pipe in half to show him it is harmless. Douki is angry and confused by the antics. Taguchi pokes Douki in the chest with the pipe which bends every time. Douki shoves him away. Taguchi waffles Douki with the foam pipe. He finally tosses it to the official. Taguchi escapes Douki’s triangle submission to roll him up for the 1,2,3.

Yoh is finally on a roll. He beats Ishimori with a bridging roll-up.

Master Wato misses his corkscrew senton bomb. Sho tries to distract the official with a chair so he can use his wrench. Wato kicks it out of his hand. The fans cheer. Sho grabs the official and pushes him into Wato. Wato has Sho pinned but the official is out. When Wato checks on him he gets shoved into the official and punched in the “lower abdomen” by Sho. Wrench to the head and submission via Snake Bite.

Phantasmo gets back on the winning track with a super kick that knocks out Takahashi. Hmmmm.