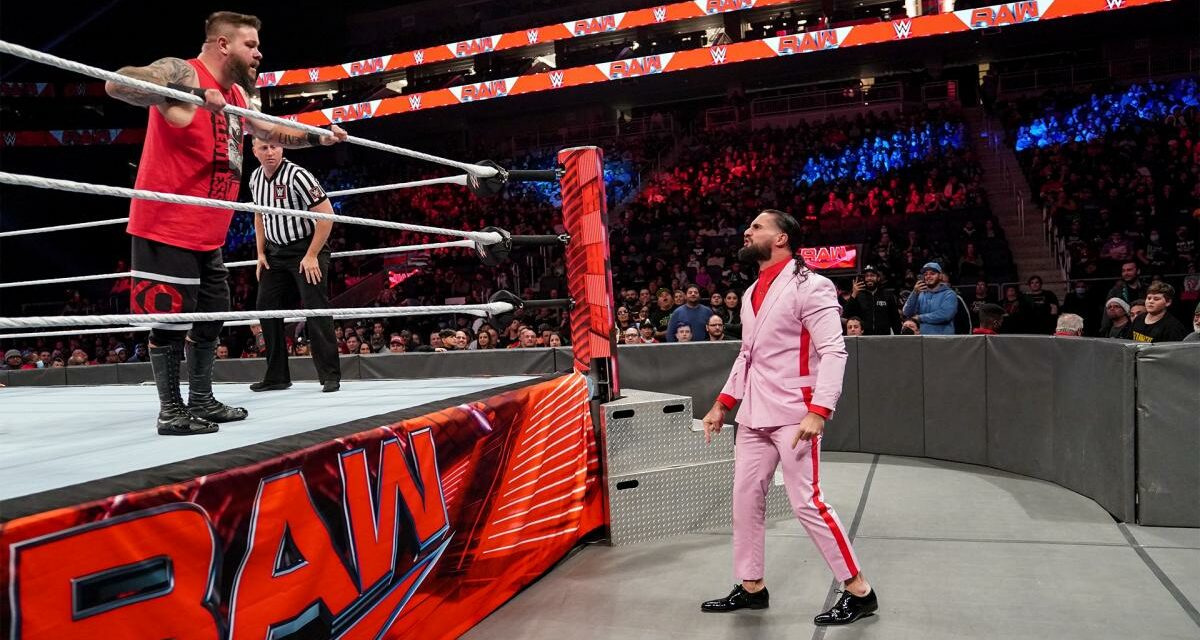 Today I learned that the WWE has cancelled the TLC PPV event and replaced it with WWE Day 1. It will take place on New Year’s Day fittingly, but if WWE thinks I’ll start off the new year by watching a mediocre pay per view; they have another thing coming. Although, at least we won’t be seeing matches that have stipulations shoehorned in, like a chairs match. I will take a ladder match, though.

Seth Rollins kicks off RAW in an extremely good mood. No one can keep him down. Seth has a secret; some breaking news if you will. He will take on Big E for the WWE Championship at Day 1. He is pretty confident that he will win and lead RAW into a new era.

Finn Balor may have something to say about that, though, after Rollins attacked him before their match last week. Balor doesn’t say a word, attacking Rollins before their match can start tonight. He tosses Rollins around the outside of the ring, throwing him over the announce table. Rollins stops Balor from getting into the ring. A suicide dive slows Balor down, but Finn answers with a sling blade. Both men find hte ring and demand for the bell to be rung.

Rollins is knocked out of the ring and Balor flies over the top rope to take him out. Balor looks for the Coup de Grace early, but Rollins cuts him down on the turnbuckle. Seth with a Falcon Arrow from the top, but can’t get the pin. Balor blocks a frog splash by getting his knees up; following with the double foot stomp. Rollins counters a sling blade and hits one of his own. Balor counters a stomp with a sling blade and goes up top. Balor misses the Coup de Grace and avoids another stomp. Both men hit the mat after connecting with simultaneous clotheslines. Balor with a Pele kick and Rollins answers with an enziguri. Rollins blocks 1916 with a shot to the eye. Rollins hits the stomp and covers to get the three count.

Austin Theory has a sit down with Mr. McMahon. Vince asks Austin if he was ready for his match with Big E last week. He then invites Austin to sit down and watch the show from his office. Vince ends the conservation threatening to kill Theory if he ever steals from him again.

Oh goody! It’s a contract signing. Becky Lynch and Liv Morgan. Becky talks down to Liv, calling her out for holding back. Surprisingly, this match will take place next week. Lynch taunts the crowds by pointing out the fact the Islanders have yet to win in their new arena. Morgan tells the champ to shut up and doesn’t forget that Lynch cried after Survivor Series; she has the receipts, too. Liv calls out Lynch’s contract as the reason Morgan’s friends were released. Morgan wants to show what she is capable off, but Sonya puts a stop to any punches being thrown. Becky wants a 10 women tag match tonight and this was planned because there’s a graphic and everything. Morgan accepts the challenge.

Riddle is a tad disappointed that Orton didn’t dress up like him this week. Riddle talks about last week, but Orton needs him to focus for their title defense. Riddle does put a wig on Orton, though.

Let’s be honest, Orton and Riddle aren’t dropping the belts here and certainly not to these two. I hope they never lose the belts, honestly. They are the best thing on RAW. Orton enjoys watching Riddle drop Roode with the draping DDT. They two pound the mat together, but the dual RKO is blocked. Ziggler with a Zig Zag, but Orton kicks out. Ziggler has a super kick blocked. Orton hits the RKO and covers for the three count.

Kevin Owens congratulates Seth Rollins on the win tonight and his match at Day 1. KO has some news of his, though. If Owens beats Big E tonight, he will be added to the title match at Day 1. Seth wants to believe Owens is joking. KO tells him to go talk to Adam Pearce.

Rollins does indeed check with Adam Pearce, who tells him that Owens is lying and nothing he said is true. Sonya asks what is going on and likes the idea of adding KO to the match.

Edge is back! And makes his way to the ring. Last time we saw Edge was at Hell in a Cell taking on Seth Rollins. He puts over Seth and starts to list all the superstars he can face now that he is on RAW. Edge is interrupted by a returning Miz. And Maryse is with him!

Miz isn’t pleased that Edge’s return got promoted while he has been promoting WWE and didn’t get the triumphant return. He’s also big mad that Maryse’s return was not promoted either. Miz isn’t on Edge’s radar, but that’s because Edge didn’t know he was back. Miz blames the WWE Universe for his ninth place finish on Dancing with the Stars. Edge calls out Miz for having an agenda. This has gone on too long. Let’s get to the point.

Edge just called out Miz for leaving his partner, Morrison, high and dry to get fired. Well, no things got interesting. Miz refuses to engage, though, and walks off.

Sarah Schreiber asks AJ Styles if he has any insight into why the Street Profits used a fire extinguisher on him. ITs funny, because AJ is blind now.

The Street Profits vs. The Alpha Academy

AJ Styles and Omos make their way to ringside before the match starts. Well, AJ is helped to ringside by Omos. You see, he can’t see.

Well, it turns out it was all a ruse. Styles leaps to the apron as Montez Ford goes up to the top turnbuckle. Ford kicks Styles to the floor and hits Gable with the frog splash to get the pin.

After the match, Omos looks at AJ with a sense of disappointed. I guess he wasn’t looped in on the plan.

Back is Vince’s office, Theory liked what AJ did, but Mr. McMahon calls it terrible. He trying to teach the young Austin.

Dana Brooke and Reggie are talking back stage.

Elsewhere, Rollins calls out Owens for being a liar. KO says that he is getting added to the match if he beats Big E tonight. Rollins mocks him.

Azeez distracts Priest on the floor, allowing Crews to deliver a running knee. Azeez eventually oversteps his role, pushing the champ off the turnbuckle. The ref doesn’t see it, but still orders Azeez to the back. Priest is incensed, returning to the ring. He kicks Crews to the mat. He beats on Apollo in the corner, before choke slamming him in the middle of the ring. Priest delivers the Reckoning and covers to get the three count.

Seth Rollins wants Adam and Sonya to do something about Kevin Owens spreading these lies that he will be added to the match. Pearce tells Seth that what Owens said is true now. Rollins throws a temper tantrum.

Rey and Dominik Mysterio vs. Cedric Alexander and Shelton Benjamin

Rey and Dom hit the dual 619 on Cedric and Shelton. Dom goes up to the top turnbuckle and hits Alexander with a frog splash to get the win.

Rhea gets ganged up by all five heels, as her team just stands around and watches. Ripley holds her own, but eventually the number do her in. Tamina controls the match. Eventually the tables are turned, but Becky jumps in to prevent Tamina from taking a KOD from Belair. Carmella takes a clothesline from Ripley and goes down in pain, but it was a ruse. Rhea doesn’t fall for it, but still gets locked in the Code of Silence. Dana Brooke breaks the hold. Things break down, as they tend to do in this type of match. Ripley is left all alone with Carmella, who counters the Riptide and hits a super kick. She can’t get the pin, though.

Rhea saves Nikki from Doudrop on the floor, as Queen Zelina sets up Dana on the top turnbuckle. Zelina tosses Dana onto her own team. Liv fights off everyone in the ring, but takes a superkick from Tamina. Liv kicks out and then fights out of a Samoan drop. Morgan hits Oblivion and covers Tamina to get the win.

Becky attacks Liv at the bell, but Morgan fights back. Morgan hits Oblivion on the champ.

Austin is still trying to figure out how to expect the unexpected. Mr. McMahon is just talking in riddles.

We get a Bobby Lashley video exploring his amateur wrestling past and rise in the WWE.

Kevin Patrick asks Big E if knowing that if he loses tonight to Kevin Owens makes his title match a triple threat if it adds any pressure. Big E gives a one word answer, “No!” He does come back and gives a proper promo.

Vince asks Austin what he has learned. Theory says he learned a lot and has to expect the unexpected. Vince slaps him, telling him he has a lot to learn.

Seth Rollins makes his way to ringside before the match starts. He cheers for Big E while sitting at the announce desk. Owens smacks the head set off of Rollins, who won’t take the bait. Owens goes up top, but gets caught by Big E. Owens is knocked to the apron, where the champ pounds on him. He delivers an apron splash. The two spill to the floor, where KO hits E with a DDT on the ring steps.

Back in the ring, Owens drops E into the turnbuckle. KO wants a superplex after setting the champ on the top rope. He delivers, but E kicks out of the pin. Owens runs into an overhead belly to belly suplex, but then blocks a splash by getting his knees up. Big E s able to connect on another splash and Owens kicks out. Big E runs into a knee and is hit with the cannonball in the corner. The two trade blows in the middle of the ring. Owens hits a super kick, but then runs into the uranage. Owens slips out of the Big Ending. Big E kicks out of a power bomb. Owens starts to climb the turnbuckle, but instead attacks Seth Rollins. Owens returns to the ring, connecting with a superkick. Rollins snaps, hitting the ring, attacking Owens. He kicks KO to the floor and then hits Big E with a superkick and stomp.

Owens is announced the winner and will be in the title match at Day 1. Seth Rollins loses his mind in the ring.

The most exciting thing to happen on Monday Night RAW was the return of Maryse. Maybe exciting is the wrong word. It was surprising more than anything. The only good thing going for RAW is RK Bro. Orton and Riddle earn a star on their own. For some reason Mr. McMahon watched the show tonight with Austin Theory. The less said about that the better.