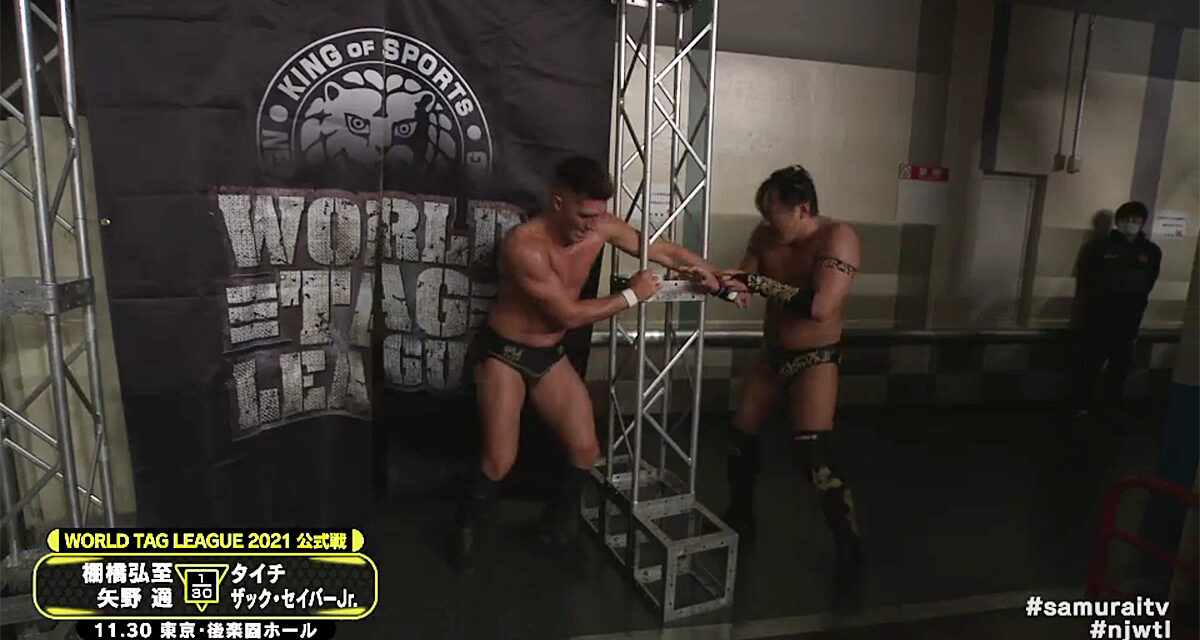 Sometimes you have to fight fire with fire. That is exactly what the IWGP Tag Team Champions did on the sixth night of NJPW’s World Tag League tournament as they faced Toru Yano and Hiroshi Tanahashi.

Yano attempted to pull off a sneaky style win by taping both Sabre Jr. and Taichi to the entrance way with a roll of tape. Suzuki-gun member Yoshinobu Kanemaru came to their rescue cutting the tape after retrieving some scissors from the backstage area.

Yano and Tanahashi got into an argument with Kanemaru and as they did, Sabre Jr. and Taichi put them in dual abdominal stretches.

Kanemaru snuck up behind them, taped Yano and Tanahashi’s ankles together. Yano and Tanahashi tried to hobble back to the ring to beat the count but stumbled and fell down. The IWGP Tag Team Champions win via countout but Sanada and Tetsuya Naito still remain at the top of the standings.

The more things change the more they remain the same.

Taka is pinned by Owens’ Package Piledriver. Taka and Suzuki are still without a win this World Tag League.

Dick Togo interferes causing Nagata to chase him out onto the floor. Yujiro punches Mask in the “lower abdomen” pinning him with the Pimp Juice DDT.

Goto snatches Honma off the top rope. Hashi and Goto double team both Makabe and Honma. They put Honma away.

Khan beats the tournament leaders with an Eliminator.